Hitting the road in search of adventure and nights under the stars needs to the right vehicle for the job and so far as road trips and camping are concerned, you’ll definitely be head pressed to find something more wonderfully retro than this 1961 Bedford CA Dormobile which is going under the hammer with RM Sotheby’s with a guide price of between $60-80k. Aesthetically old-school in the extreme, you’ll turn heads aplenty with this cracking camping contraption and be genuinely impressed with just how functional a machine it is. 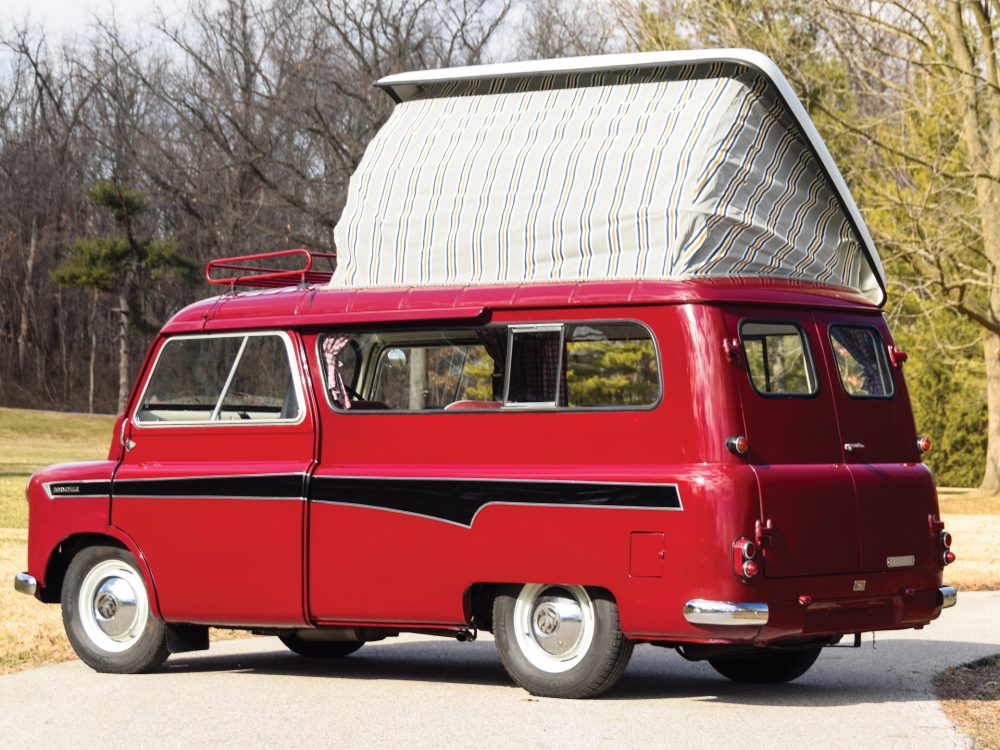 The 1961 Bedford CA Dormobile is certainly a camper for those with a love of old school style camping and being from the 60’s it has got a distinctive visual vibe that is hard not to be won over by. This stunning looking ride will make for some awesome, unforgettable camping trips and it has a Bedford chassis with Martin-Walker Dormobile caravan conversion to make it the ultimate in weekend warriors for all your camping adventures.

It’s very rare to find a Bedford CA Dormobile Stateside and particularly one in as good condition as this one going under the hammer with RM Sotheby’s. This is the carmaker’s most popular model and it’s easy to see why when you consider the amount of space it affords you when heading out on a camping trip. This one coming up for auction has had some contemporary touches in terms of the fixtures and fittings within and it also has recently been fitted with newer radial tires. 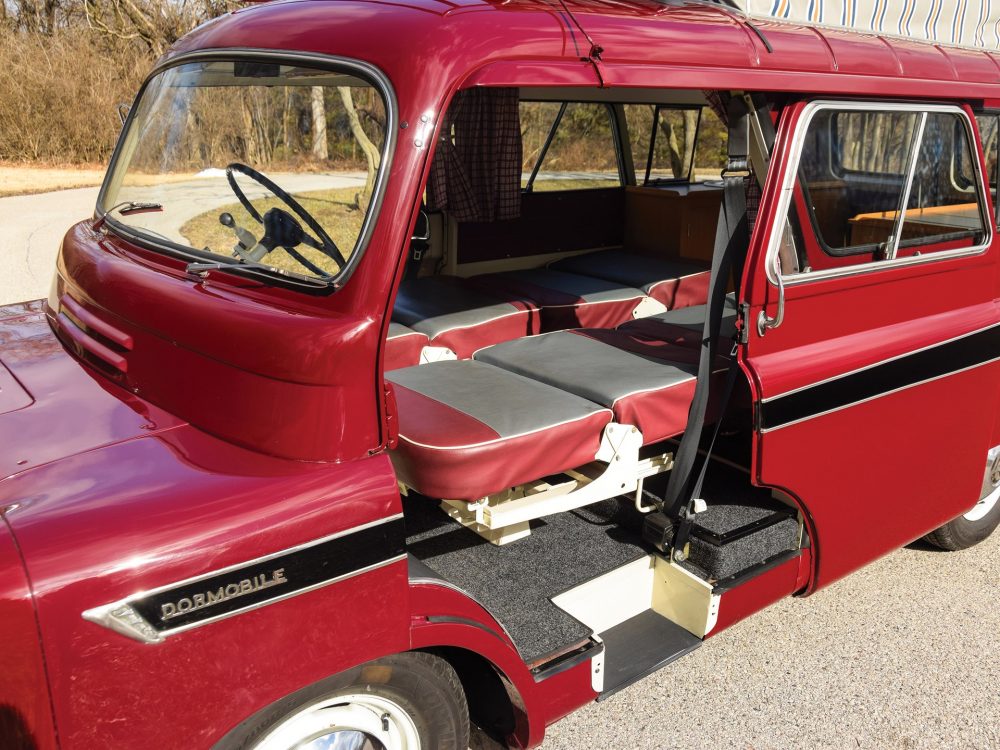 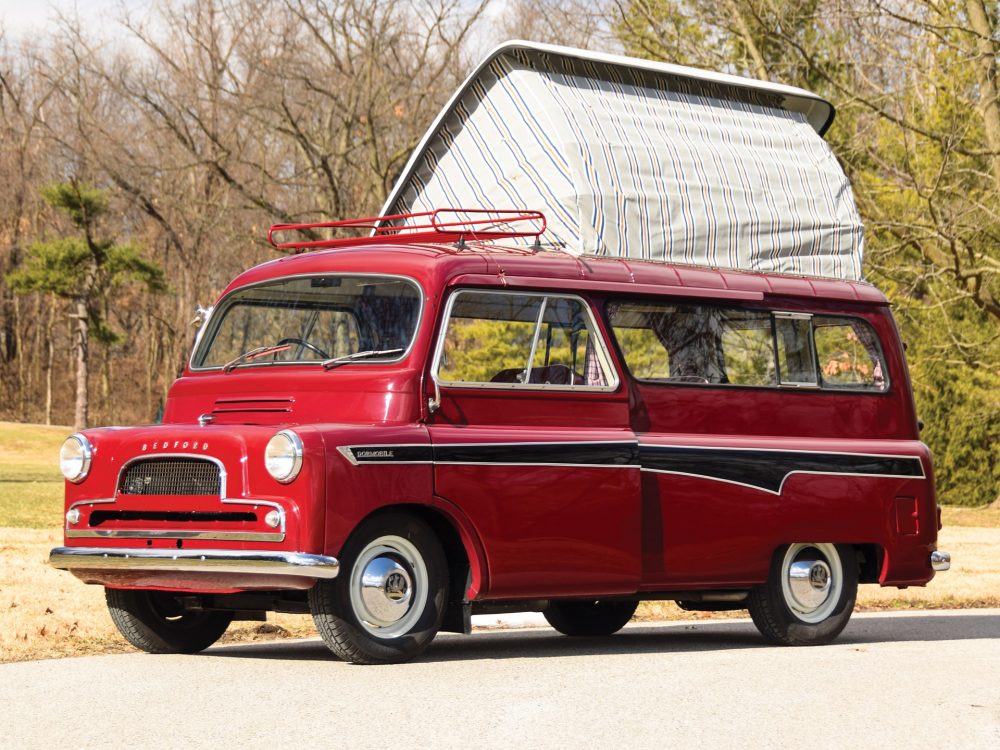 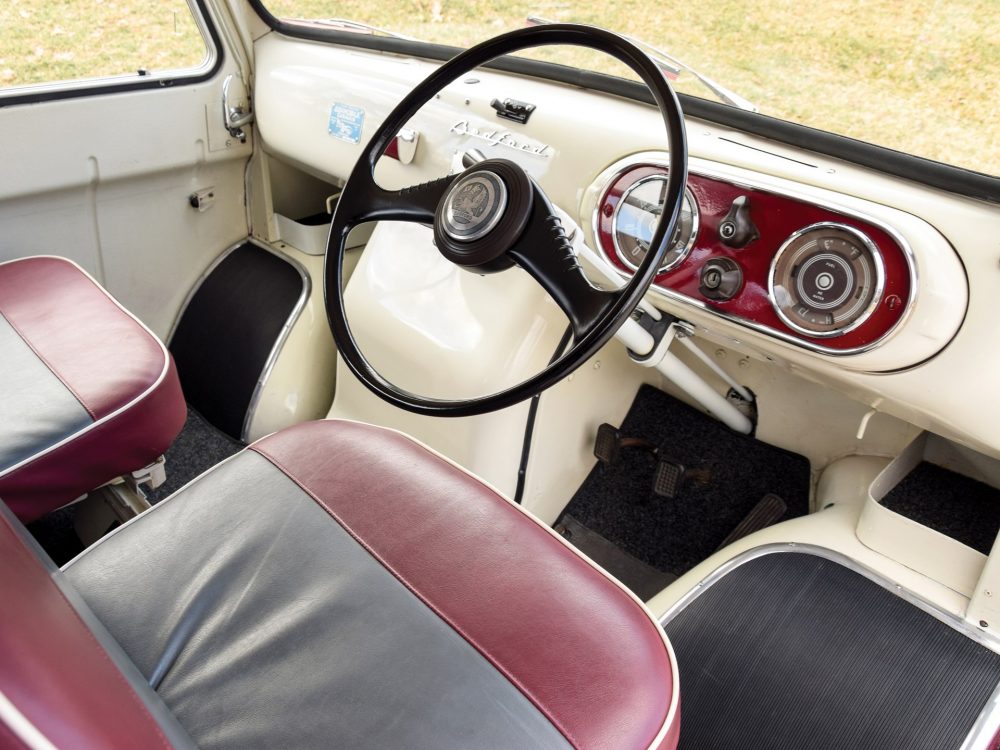 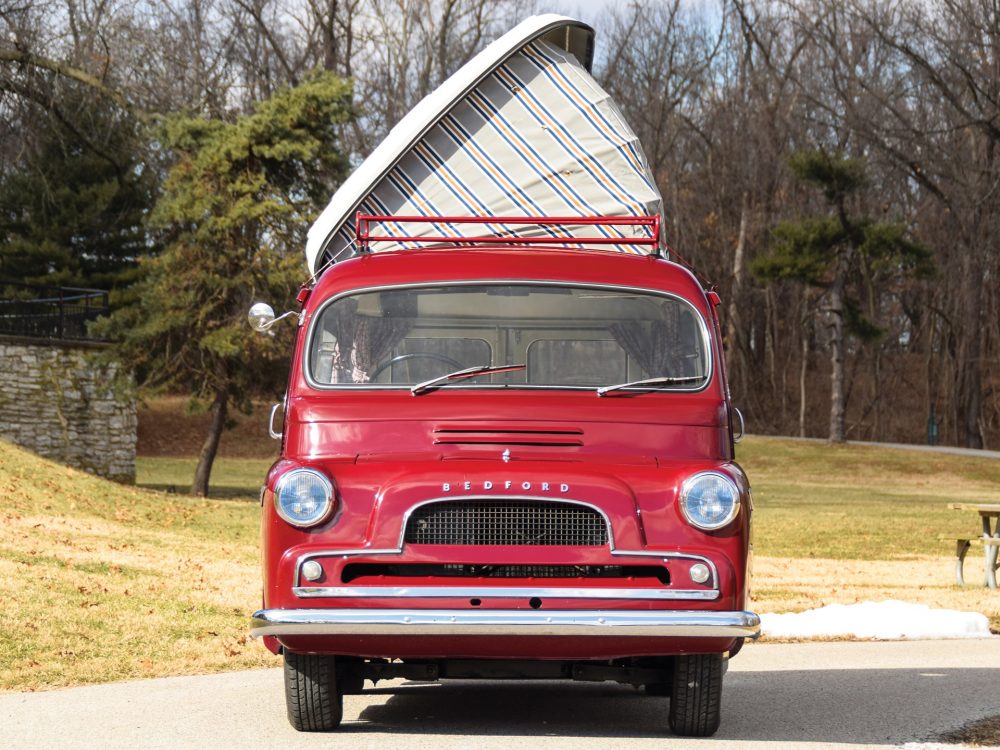 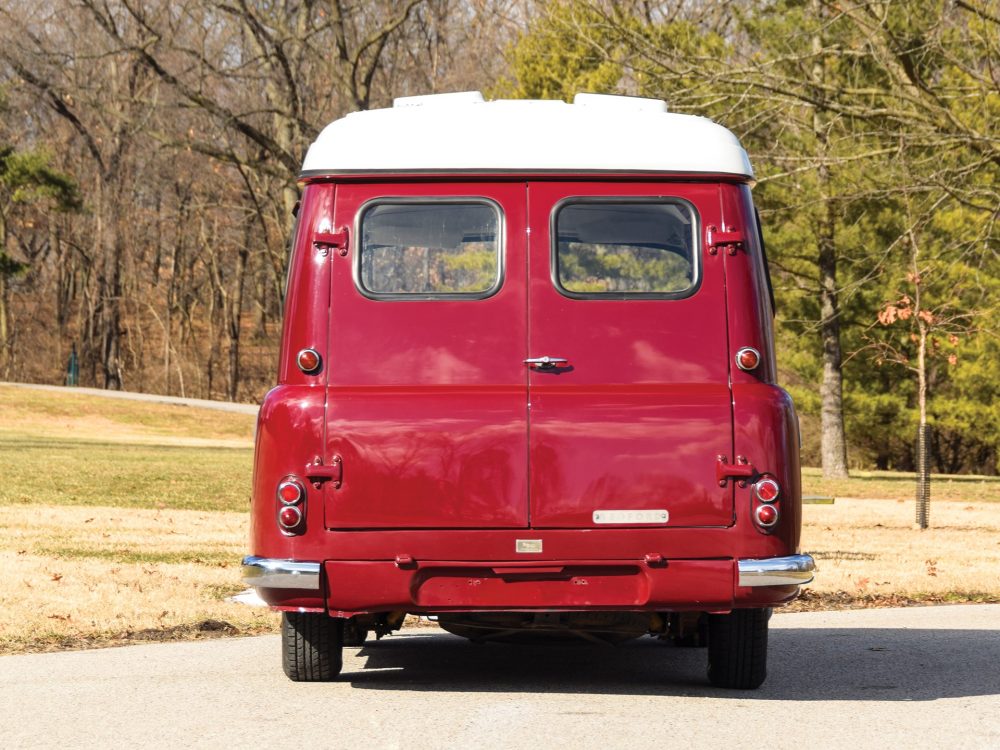 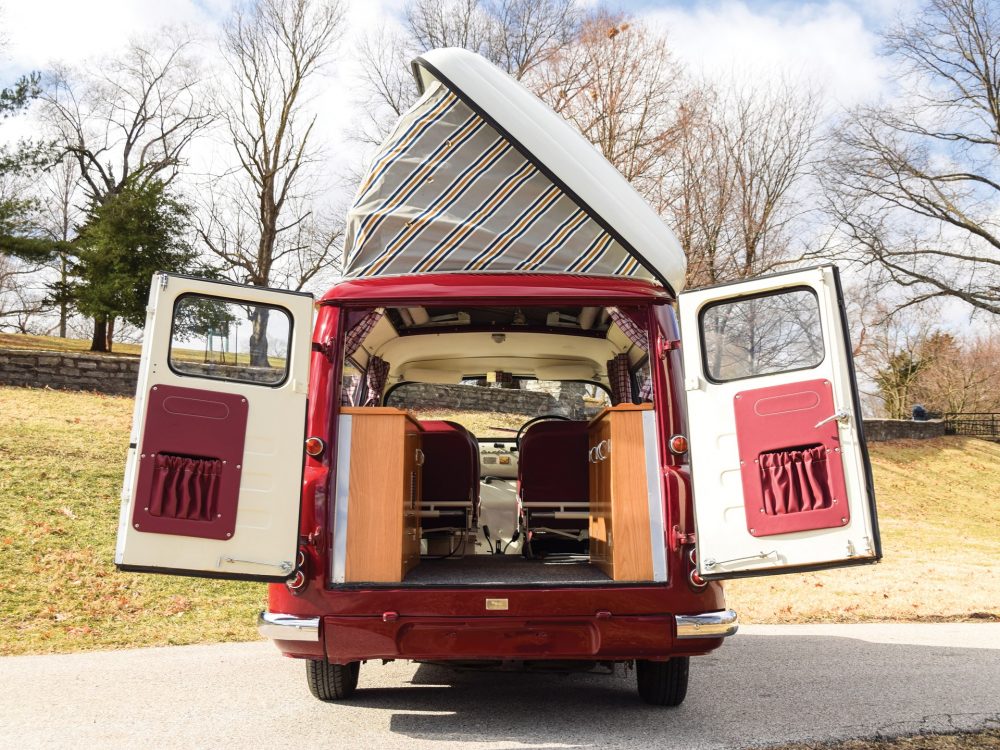 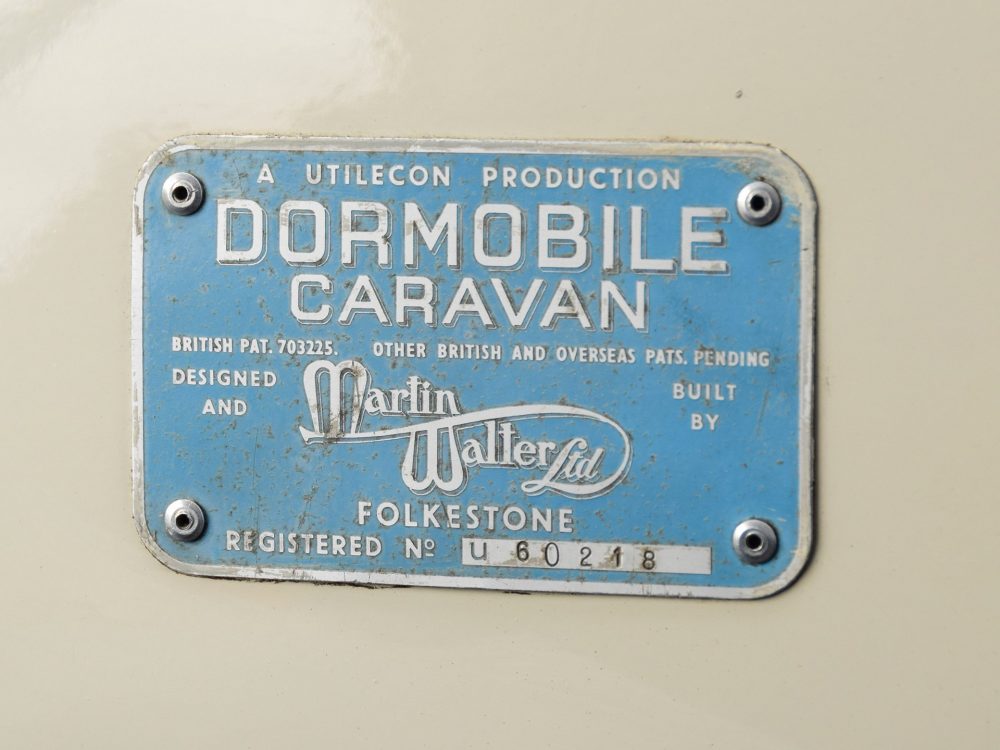 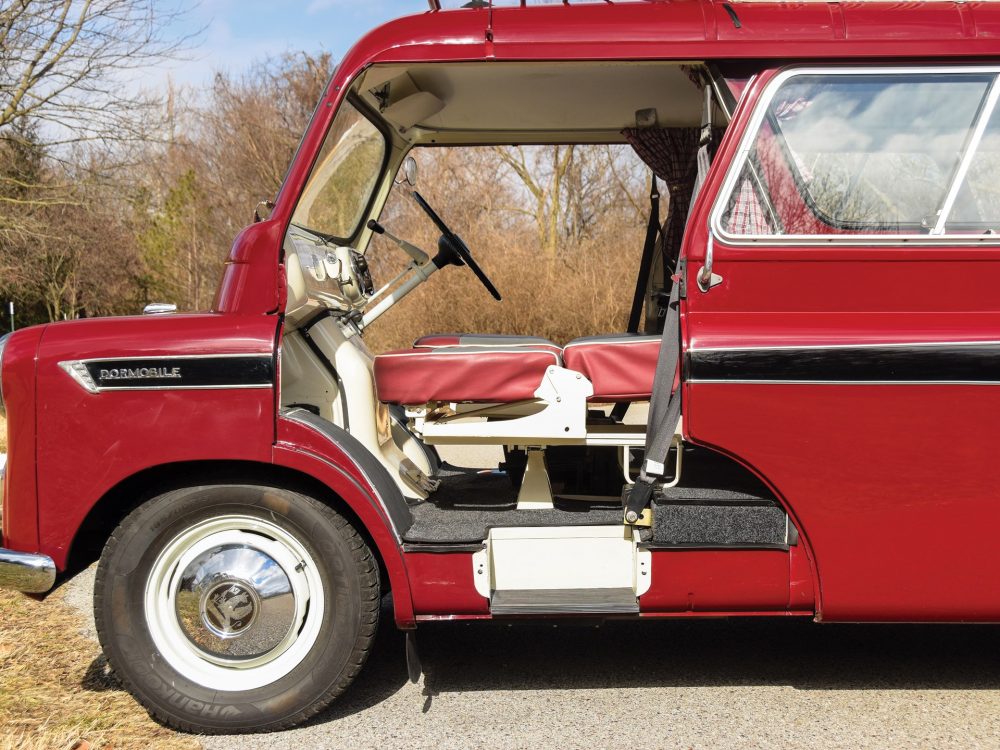 The 1961 Bedford CA Dormobile on RM Sotheby’s is obviously not going to be everybody’s cup of tea from an aesthetic point of view but if you love the thought of hitting the road in one of the coolest looking campers the 60’s had to offer then you’d be mad not to throw your hat into the ring on this auction. Bedford introduced the CA Dormobile in 1952 and it remained in production through until 1969. The CA shared its powertrain with the Vauxhall Victor – a simple, robust, and easy-to-service 50-hp, 1,500-cc inline four-cylinder engine. Courtesy of its passenger car roots and highly functional design, the chassis was popular for aftermarket camper conversions. 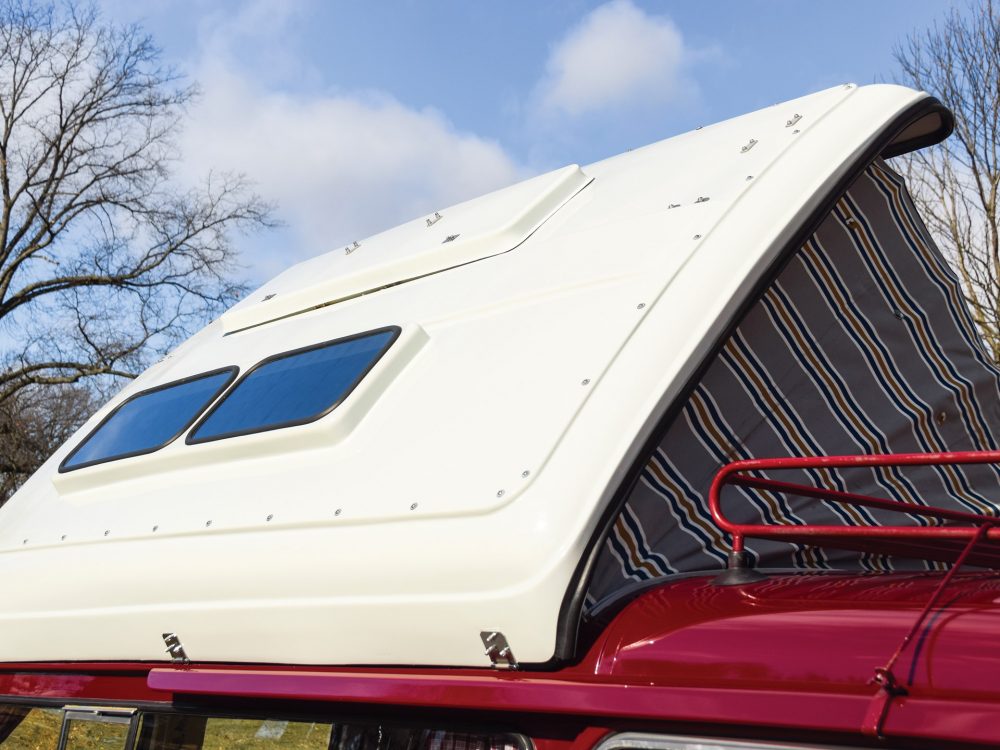 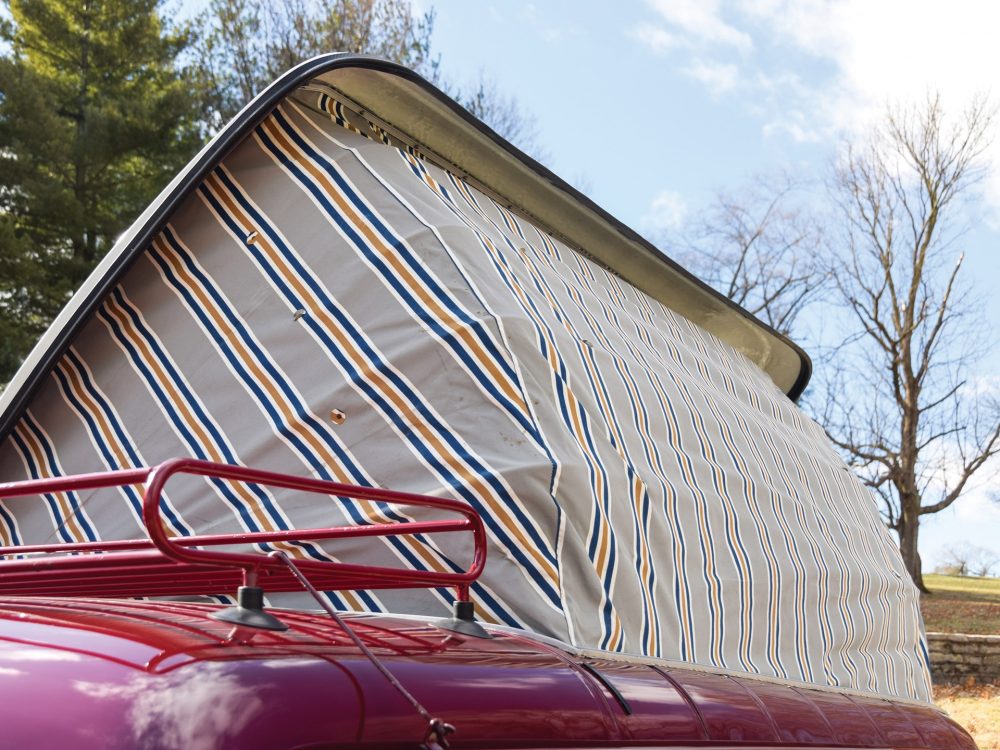 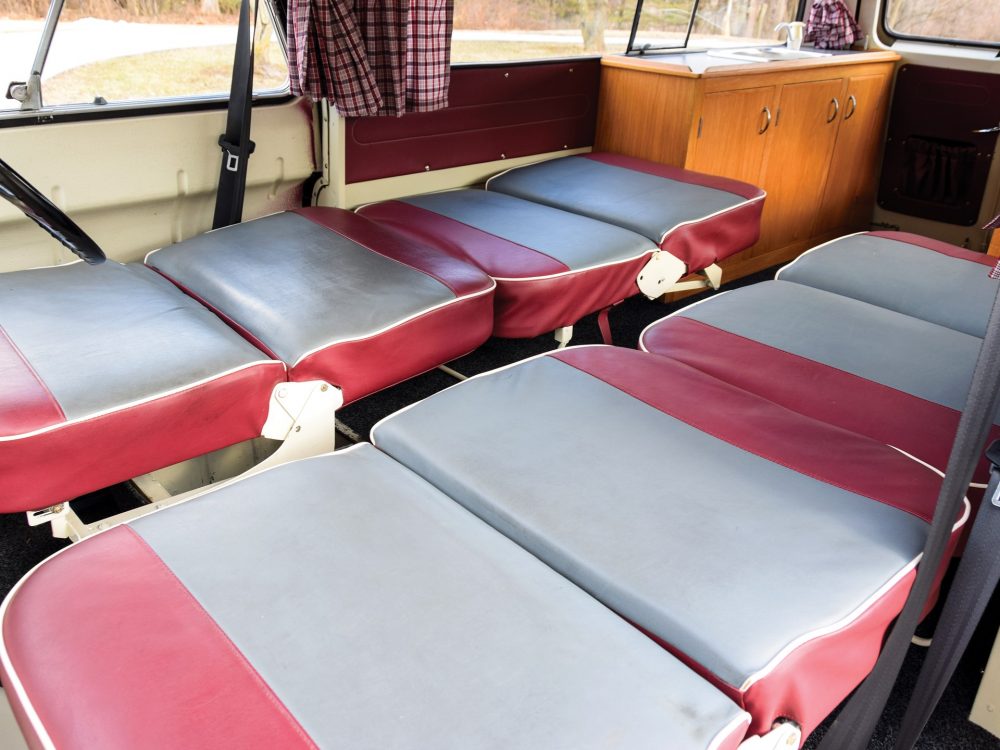 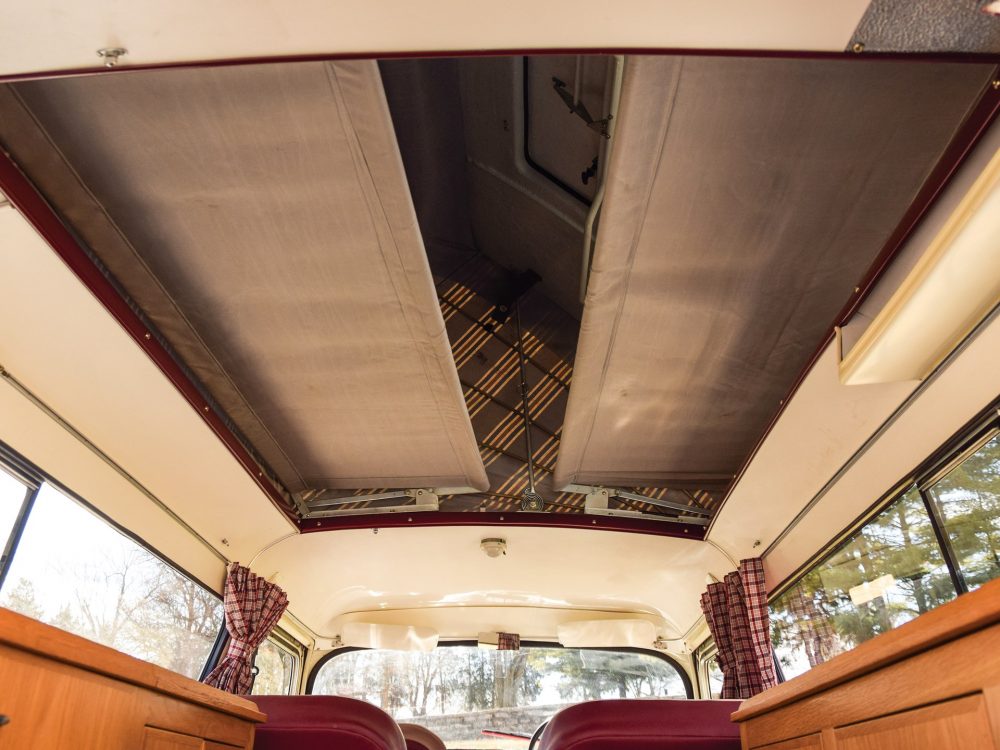 Highly unusual in design, the Bedford Dormobile arrived on the West Coast of the United States via New Zealand. This eye-catching offering from 1961 is finished in dark red with a stylised, chrome-outlined flash, and it is an updated older restoration with a selection of contemporary fixtures and fittings. The bodywork is in great condition with well-preserved brightwork and good-quality paint. It has its original Dormobile badges which can be found adding life to the fenders and the Martin-Walker coachbuilder’s plaque is situated below the rear doors.

As this majestic looking machine is designed for camping, it needs to excel interiorly as well and, we’re glad to report it does exactly that. The 1961 Bedford CA Dormobile modern storage cabinets with sink, a Waeco portable refrigerator, and portable gas camp stove. There is a new 40-litre wastewater tank and Zempire camping latrine are also included. Thanks to folding seats that lay flat into beds, the little Bedford is capable of sleeping up to four people. The two-tone red and grey seating is in excellent condition, and the Dormobile is reported to run and drive well. A spare set of wheels and wheel covers, radiator, and assorted emergency service items are included. 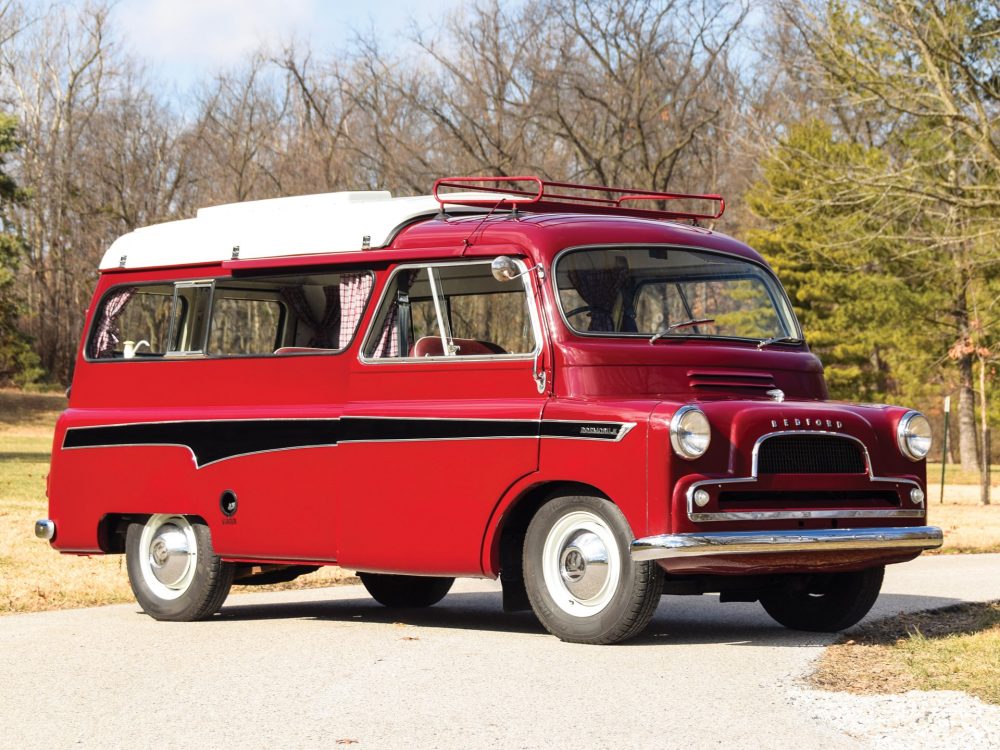 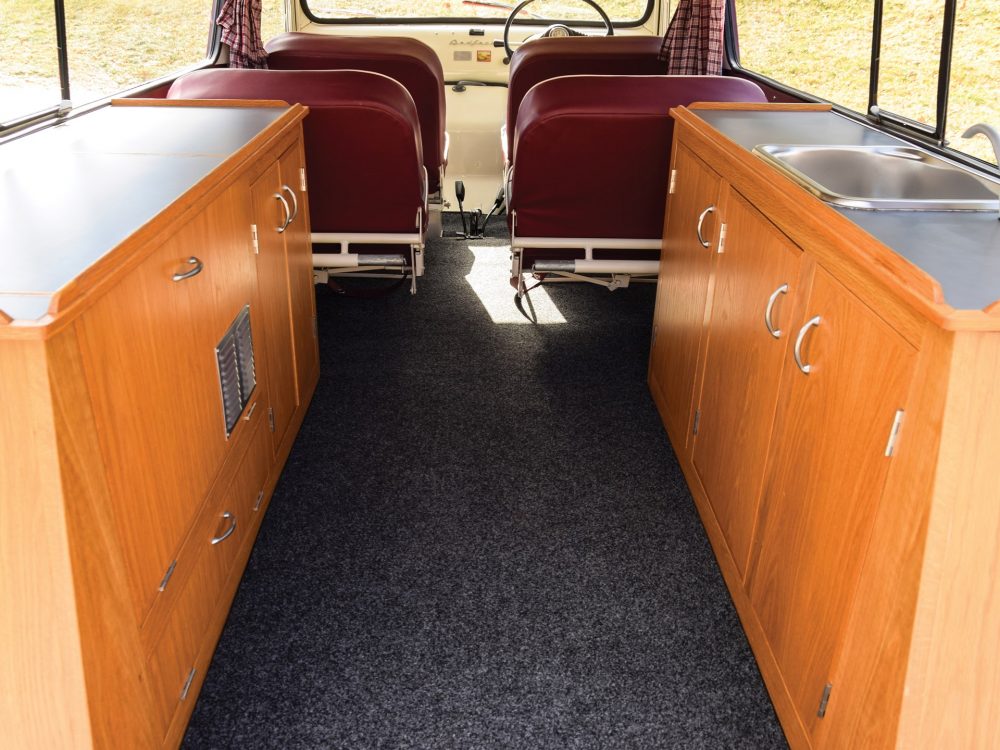 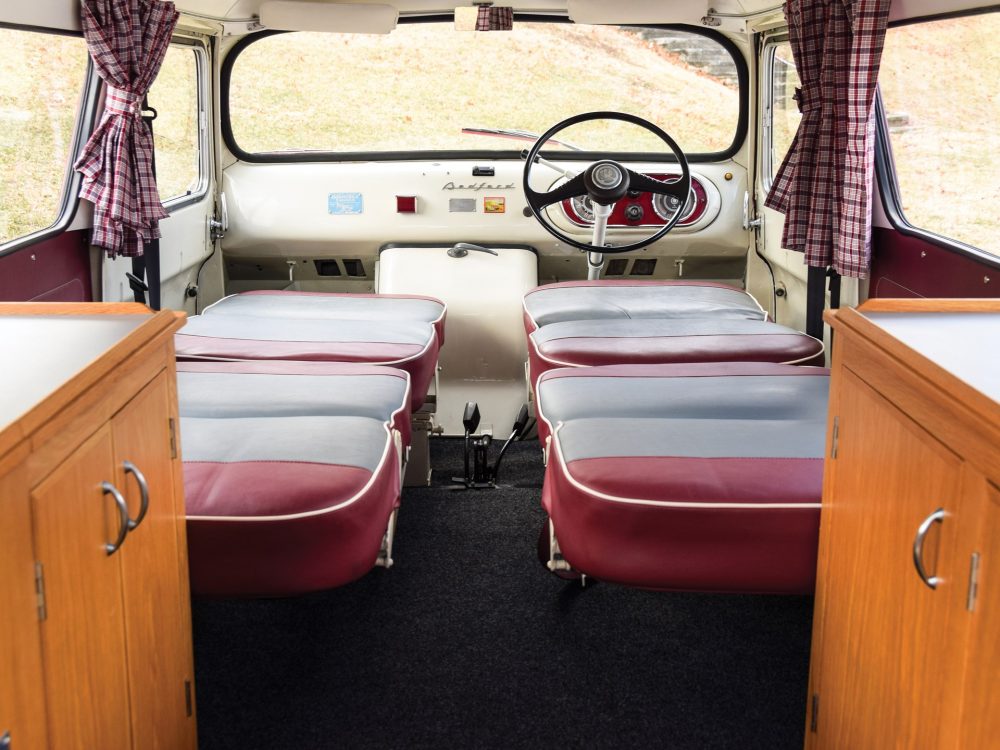 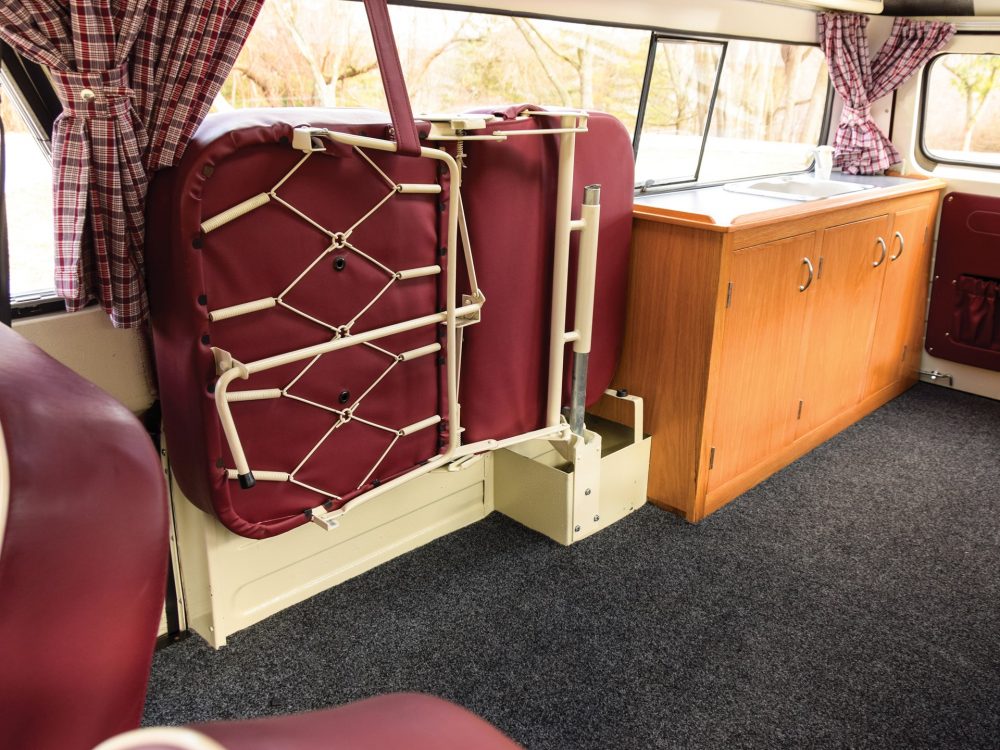 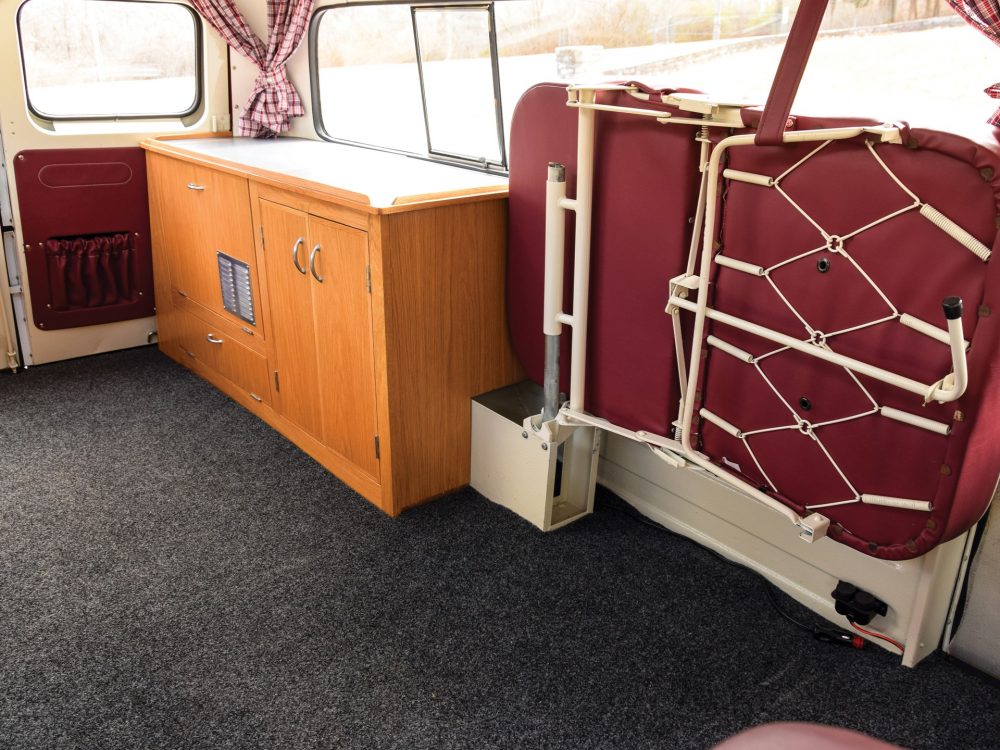 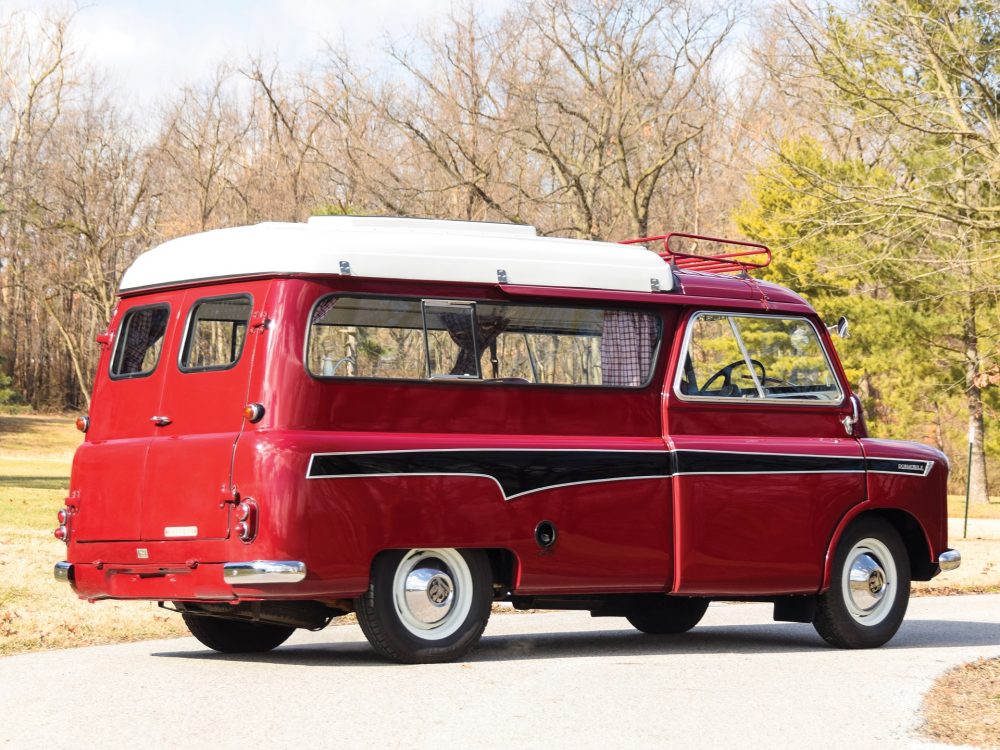 Very rare find in America, the 1961 Bedford CA Dormobile might have quite a punchy price tag of between $60-80k but if you’ve long been thinking about heading on the ultimate wilderness road trip with plenty of camping under the stars and by the ocean, we really can’t think of a better candidate for the job than this here at Coolector HQ.