Hotels literally come in all shapes and sizes but there are the odd few that really dare to be different and stand out from the crowd through their choice of structure, interior design endeavours and sheer visual impact. It is these types of hotels that we’ll be delving into here so take a look at our pick of 8 of the world’s most unusual (and amazing) hotels below: 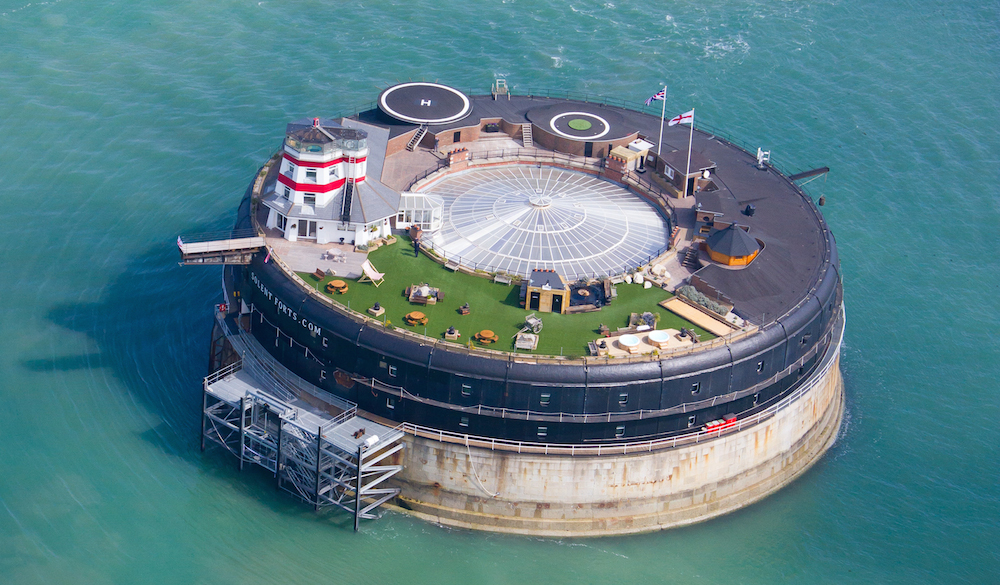 Not many hotels are going to have a more interesting backstory than that of No Man’s Fort, in the Solent sea off the coast of Portsmouth in the UK. This Victorian era fort was built between 1867 and 1880 with the principle purpose of protecting Portsmouth from an attack by Napoleon III. It is now a luxurious hotel boasting 22 bedrooms not to mention an impressive lighthouse and a variety of suites and a penthouse apartment. 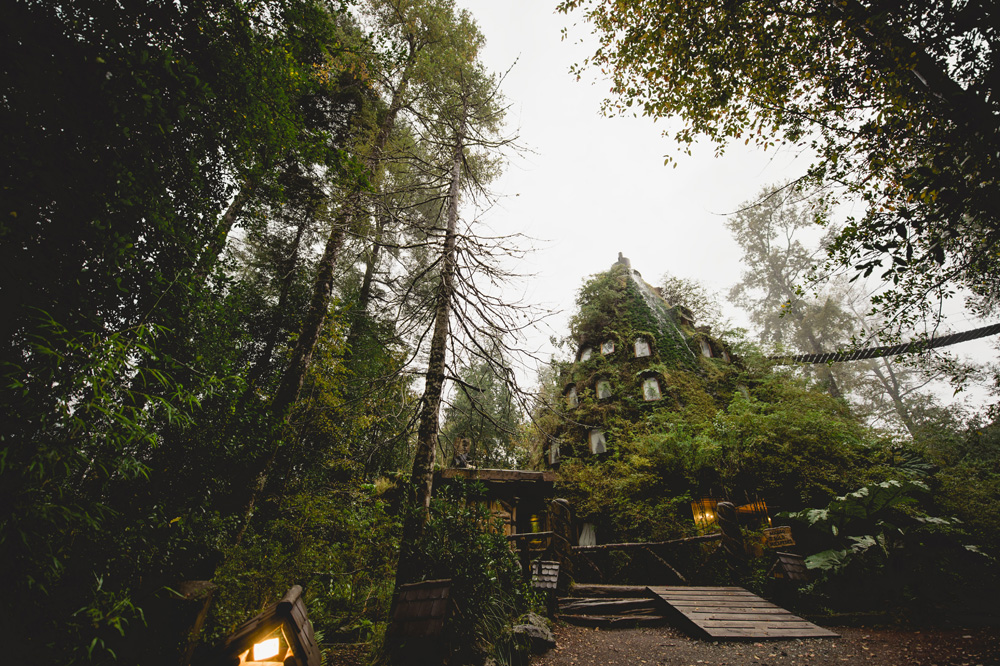 Looking like something that could have been lifted from the pages of The Hobbit, the Huilo Huilo Montaña Mágica Lodge in Chile really is a sight to behold and definitely is one of the most visually unusual hotels you’re likely to come across in 2017. There can be no better setting for a hotel either as it is to be found in 60,000 hectares of Valdivian forest and boasts not just natural hot springs but also undiscovered lakes with direct access to the Mocho Choshuenco volcano. Truly one of the most unusual and amazing places to stay in South America. 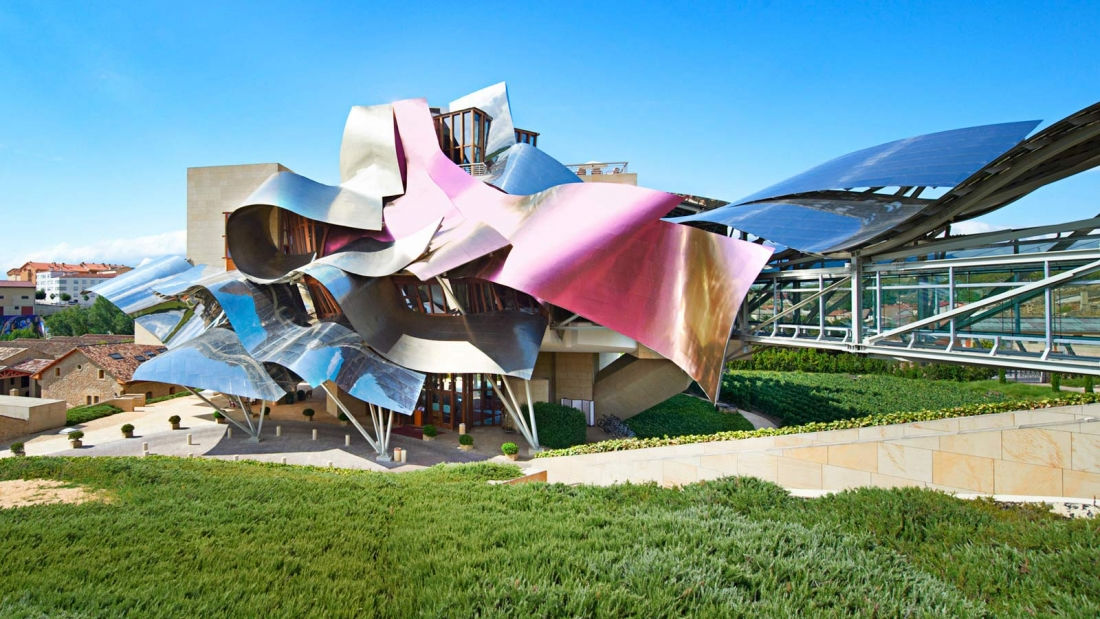 Opened in 2006, the Hotel Marqués De Riscal is the one and only hotel project of renowned architect, Frank Gehry, something which is likely immediately obvious from the minute you lay eyes on its exterior. An impressive combination of design, art, gastronomy and luxury, the Hotel Marqués De Riscal is situated in heart of Spain’s Rioja wine-growing region so the perfect choice of stay for those with a love of wine tasting. 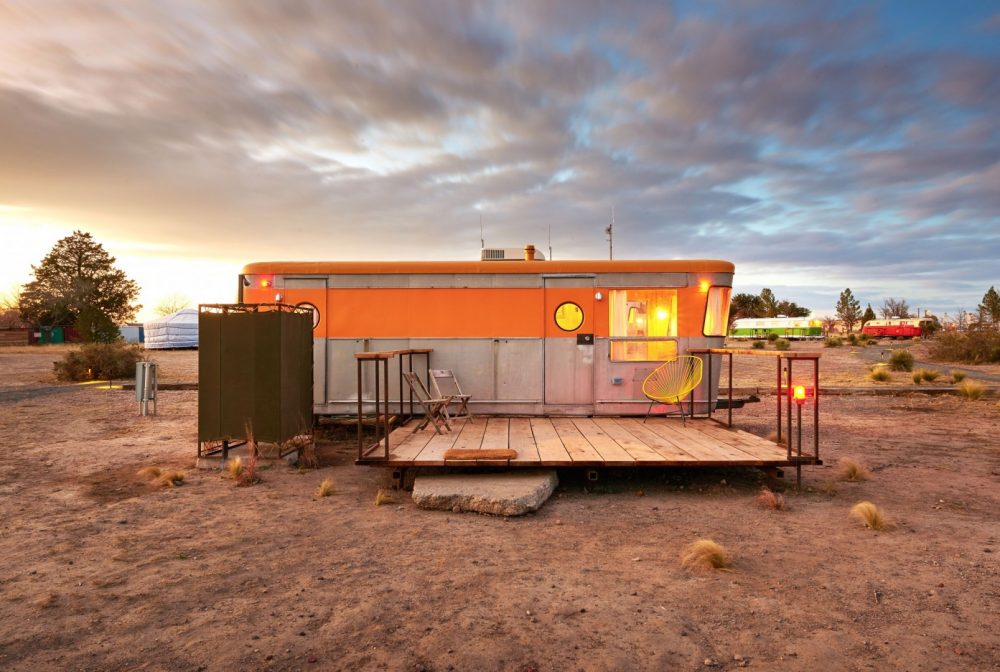 Whilst a trailer park in the wilds of Texas might not seem like everyone’s choice of the ideal holiday destination, it definitely appeals to our sensibilities here at Coolector HQ and, to be honest, you’re not likely to find many better than the El Cosmico trailer park in Marfa, Texas. It’s not just trailers that you can pick from at this eye-catching travel destination, you’ll also discover yurts, tee-pees and safari tents and the site is owned by a well-known boutique hotel purveyor so it won’t be quite as rustic as you think. 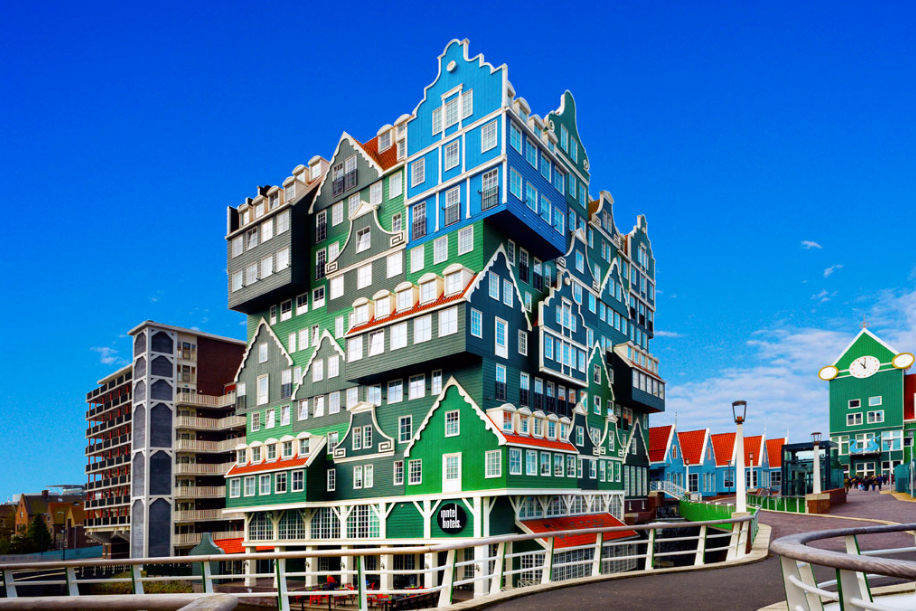 Looking like the design of a mad architect, the Inntel Amsterdam Zaandamn Hotel near Amsterdam in Holland, is one of those hotels that really has to be seen to be believed that it isn’t a photoshop job. This rustic looking hotel is real though and boasts loads of amazing features and amenities that should make it one of the hotels to visit in 2017. The exterior of this jaw-dropping hotel consists of around 70 stacked houses with a facade that it typical to the region in Holland and it is the perfect spot to stay away from the hustle and bustle of the Netherlands capital city. 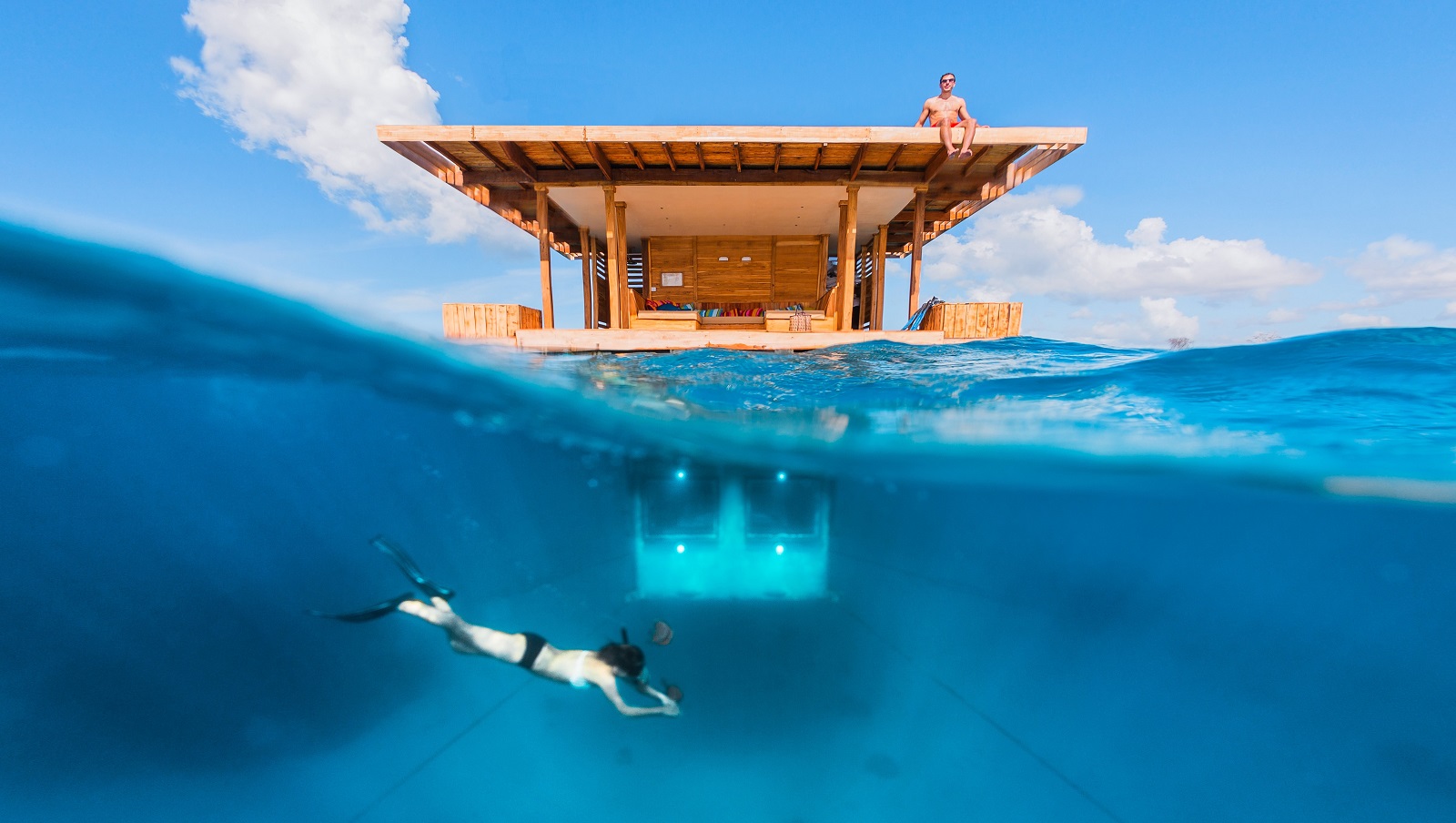 For those who want to sleep with the fishes without getting the Mafia involved, a stay at the, frankly incredible looking, Manta Resort on Pemba Island in Tanzania will provide all this and a whole heap more as well. Boasting an Underwater Room with a bed submerged beneath the waves, you’ll be mesmerised by the abundant sea life right outside your window and will likely find yourself awake all night not wanting to miss a thing. Hotels just don’t get more unusual or luxurious than this. 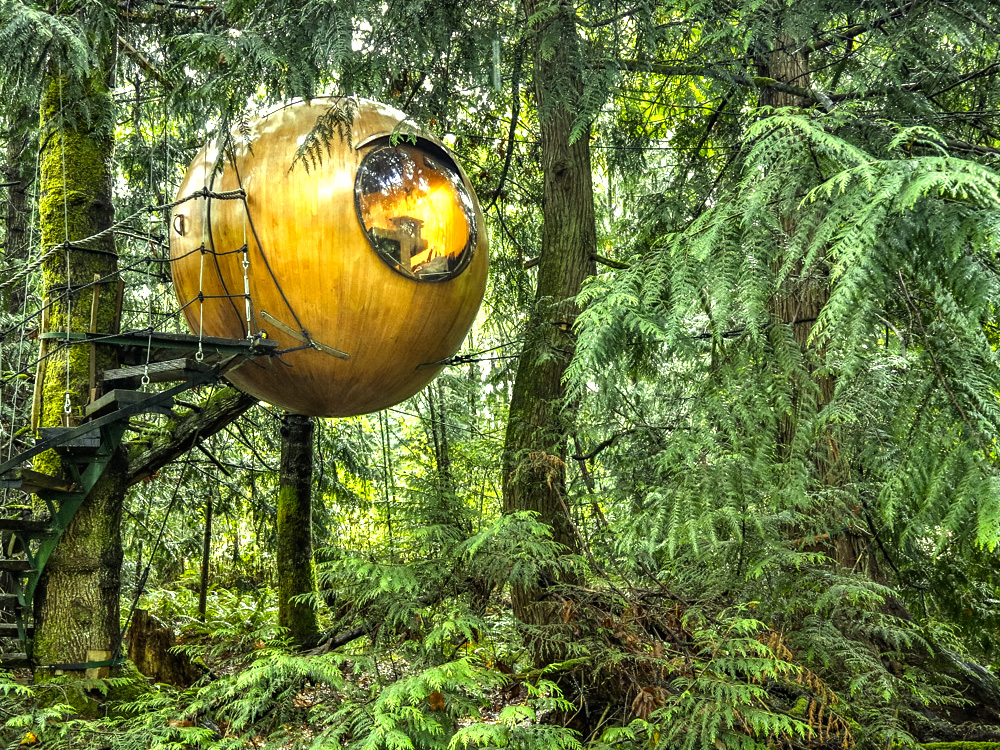 If it’s getting in touch with nature and a spot of wilderness that you’re after in 2017, you’ll find everything you’re looking for with the extraordinary looking Free Spirit Spheres situated on Vancouver Island in Canada. The spheres are crafted from a combination of cedar, Sitka Spruce and fibreglass and are tethered to the treetops which means that they will sway gently in the wind and provide a super relaxing experience to unwind. Definitely one of the most unusual aesthetically on our list but certainly one of the coolest as well. 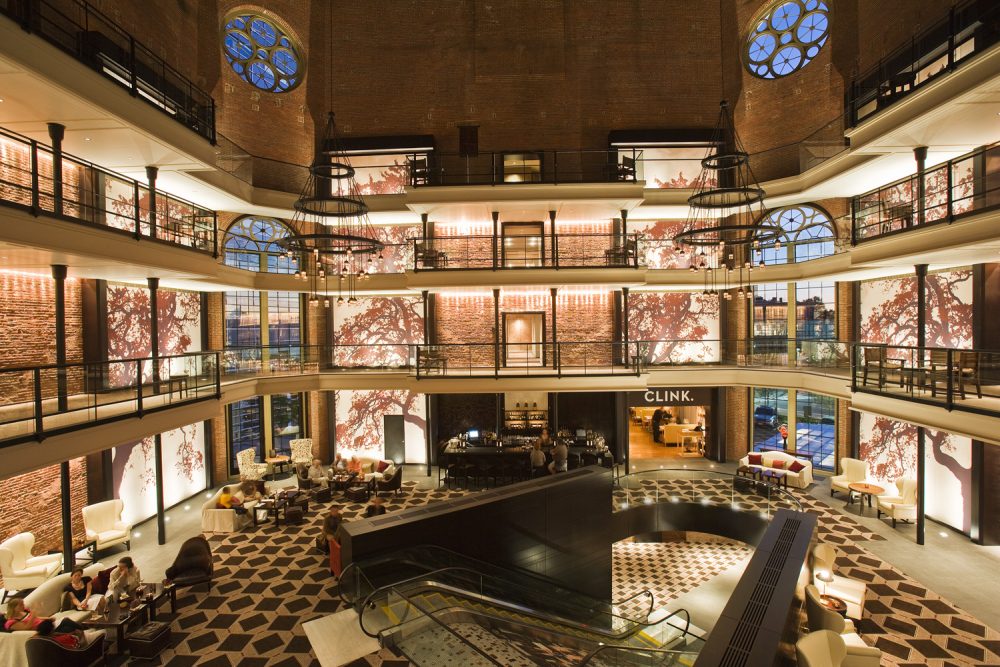 Whilst, on the face of it, the Liberty Hotel in Boston, USA, might look like your standard luxury hotel, it’s actually got a rather interesting backstory that makes it worthy of a place on our list. For you see The Liberty Hotel was once the Charles Street Jail, one of the city’s most notorious jailhouses. As you can see, a rather phenomenal job has been carried out to convert it into a top of the range luxury hotel but there are nods to its roots throughout such as the Alibi Bar, Clink Restaurant and the fact it retains its three-storey arched windows. One of the most unusual hotels you’ll find on America’s East Coast.