Everyday carry is something that we spend an undue amount of time on the search for here at Coolector HQ and Kickstarter always serves as an excellent hunting ground. So it has proven once again with the ace looking B-2 Dog Tag Concealed Nano Blade Pocket Knife which has already smashed its target over on the crowdfunding site which is testament to the fact that there are a lot of men who want to add this to their EDC line up.

The B-2 Dog Tag Concealed Nano Blade Pocket Knife on Kickstarter builds upon an already mighty successful product. The original B-2 Nano Blade Tactical Pocket Knife first debuted in 2017.  It raised nearly $500K in total funding with over 6,000 backers and went on to become the World’s Most Successful Pocket knife selling over 30k units worldwide in its first year.  Bomber & Company are back on Kickstarter with a complete redesign of the B-2 Nano Blade, this time concealed inside a discreet military style sheath that gives it a whole new level of stealthiness and functionality and it can be yours for the bargain price of just $40 during the Kickstarter campaign.

Impressive Specifications for Everyday Use

Any piece of EDC that makes it into your line up should be a useful bit of kit that you use on a daily basis and chances are this B-2 Dog Tag Concealed Nano Blade Pocket Knife will become one of the mainstays of your line up such is its first class functionality. The sharp flat ground straight edge blade is ideal for thin sharp precision slices and versatility of everyday use. The blade is also perforated to allow cutting and slicing of materials to not stick onto the blade itself. The full opened length is only 3.7inches and when closed, it stands at 2.75inches in length and less than 0.2 inches in thickness. The miniature size of the pocket knife means it can easily be hidden in any coin pocket, wallet, or worn around the neck as a standard dog tag. 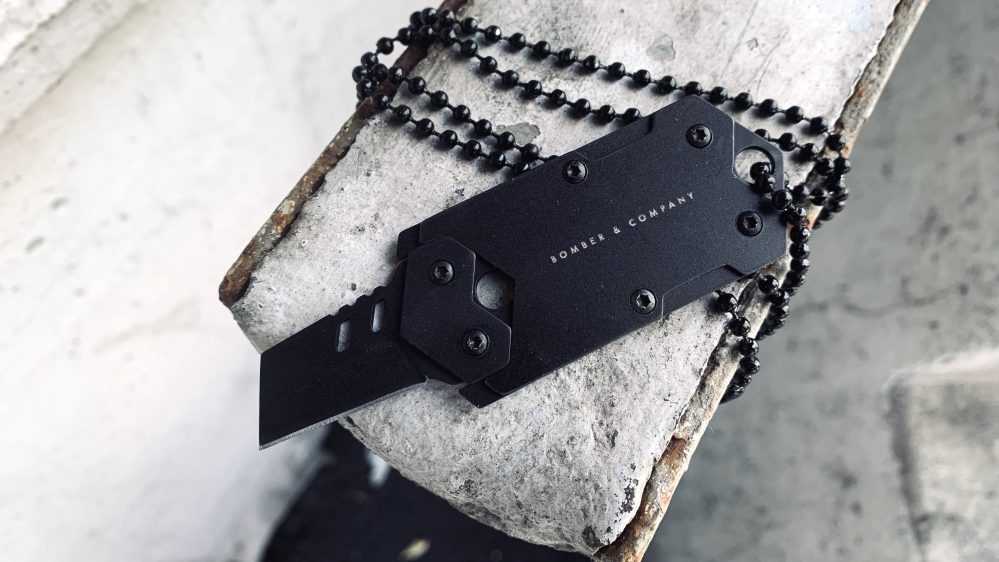 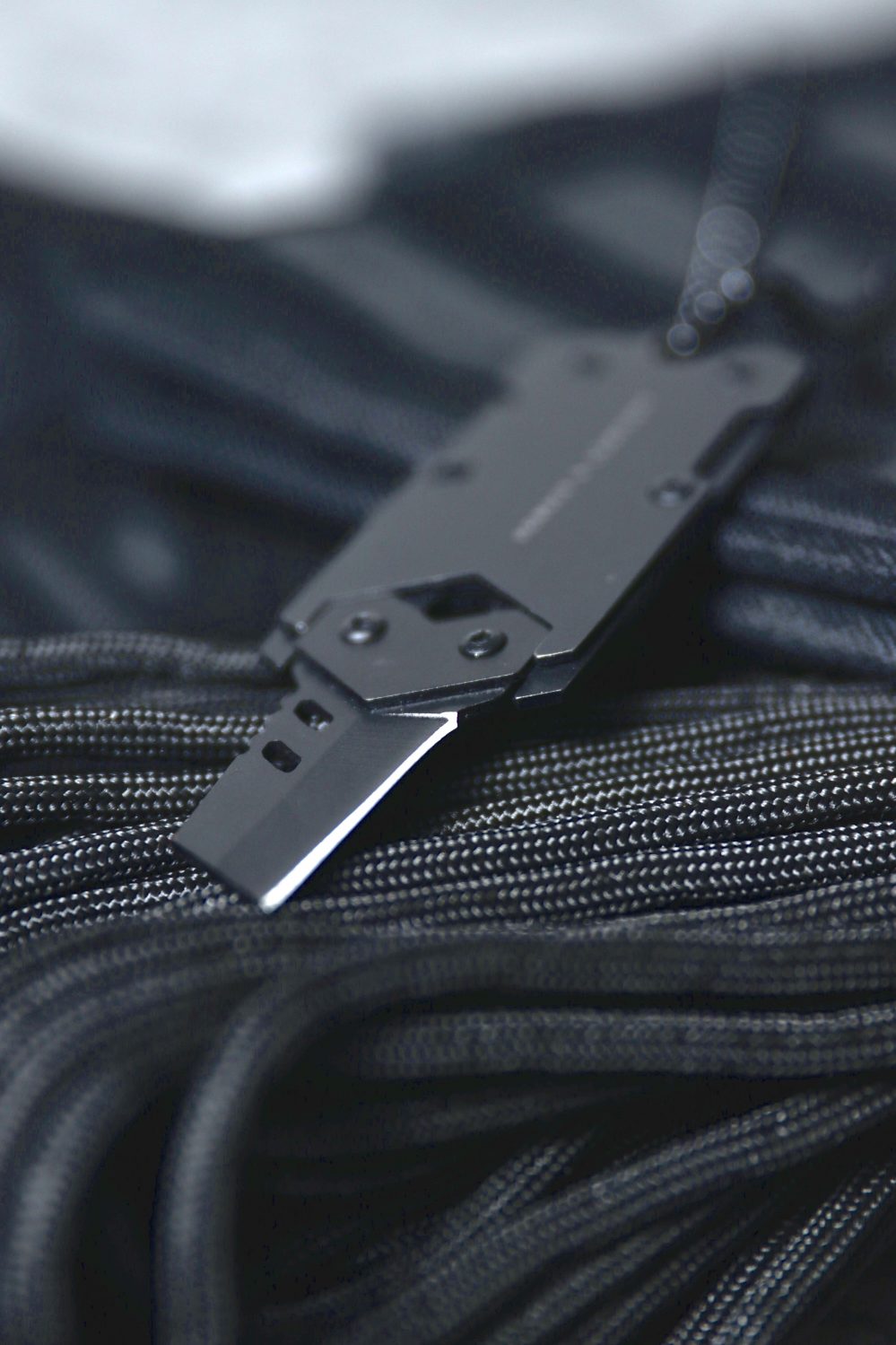 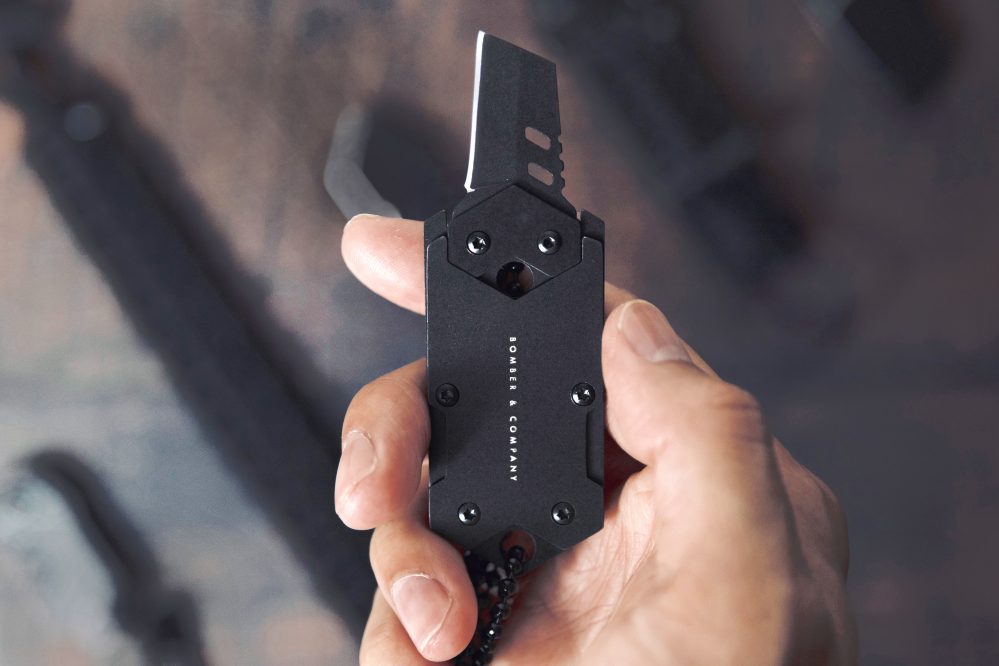 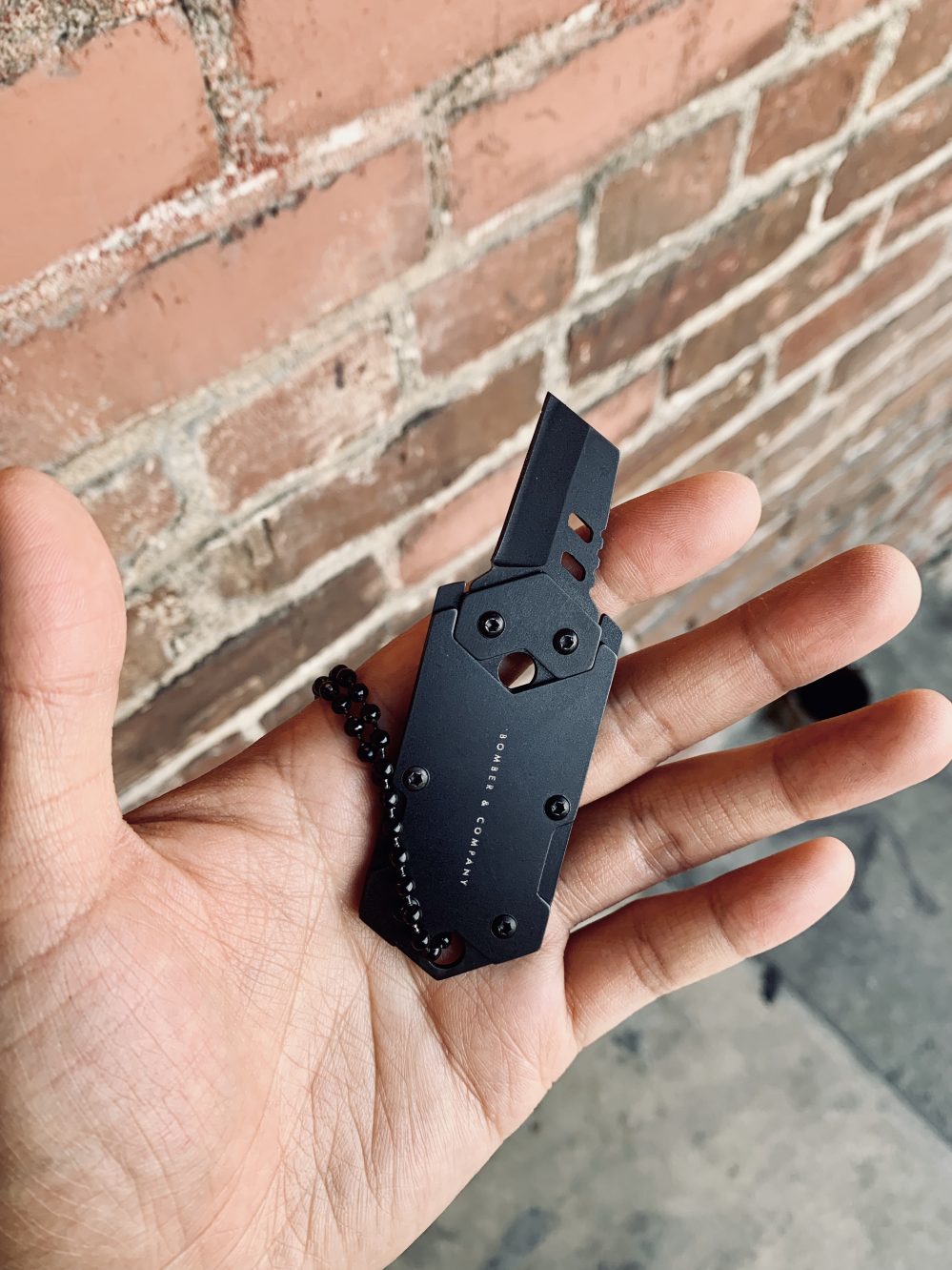 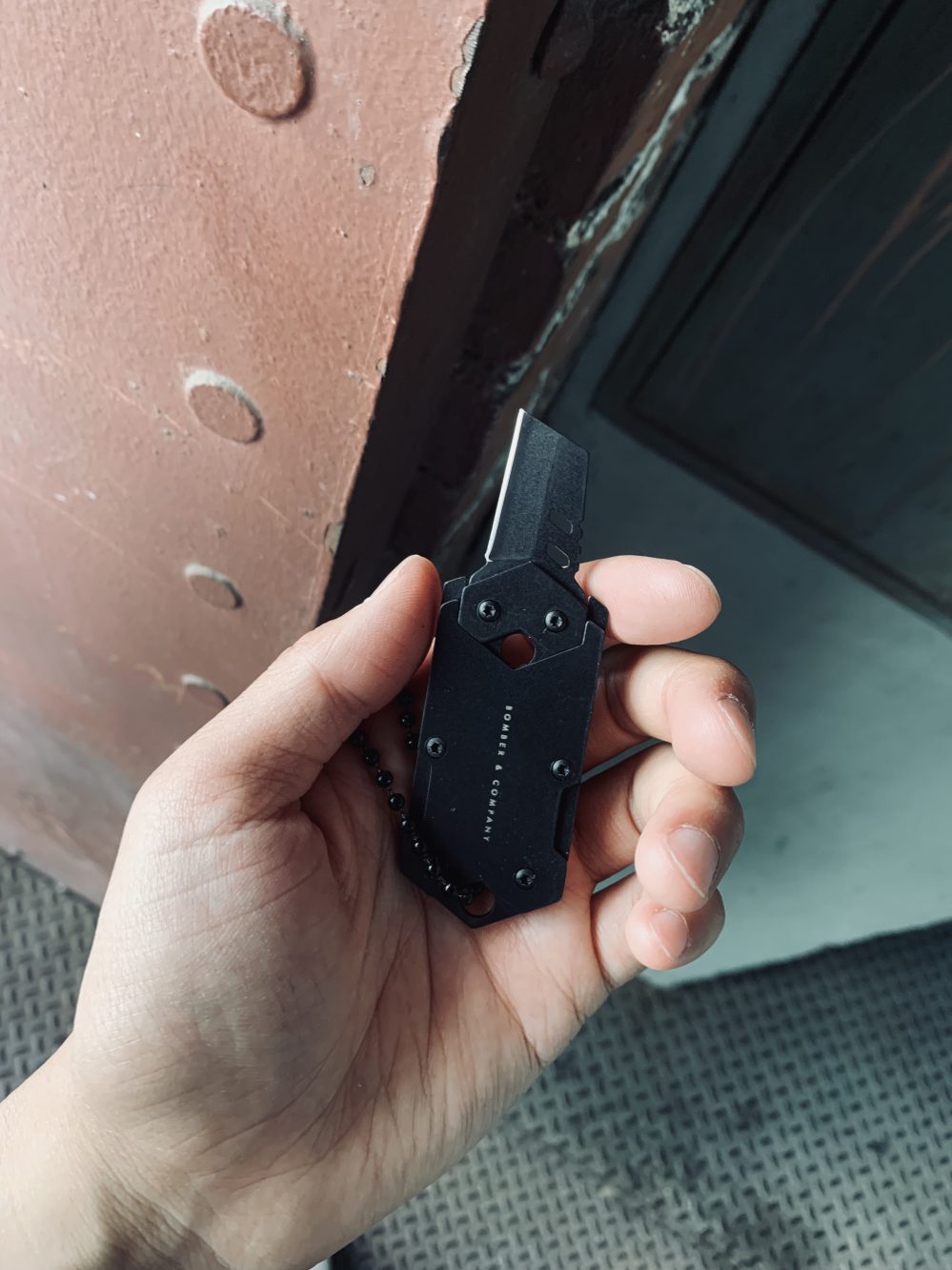 Extremely lightweight, the B-2 Dog Tag Concealed Nano Blade Pocket Knife on Kickstarter ($40) weighs in at less than 2oz making it the world’s lightest, fully functional, 440Carbon black stainless steel tactical pocket knife. It is crafted from 440C black stainless steel which allows B-2 pocket knives to be one of the strongest nano blades ever created. Rated at 58-60HRC the B-2 Dog Tag is exceptionally robust and will stay sharp for longer periods of use. 440C is a highly durable and corrosion resistant stainless steel. The B-2 Dog Tag can endure years of outdoor wear without extra maintenance to protect the blade from rusting. 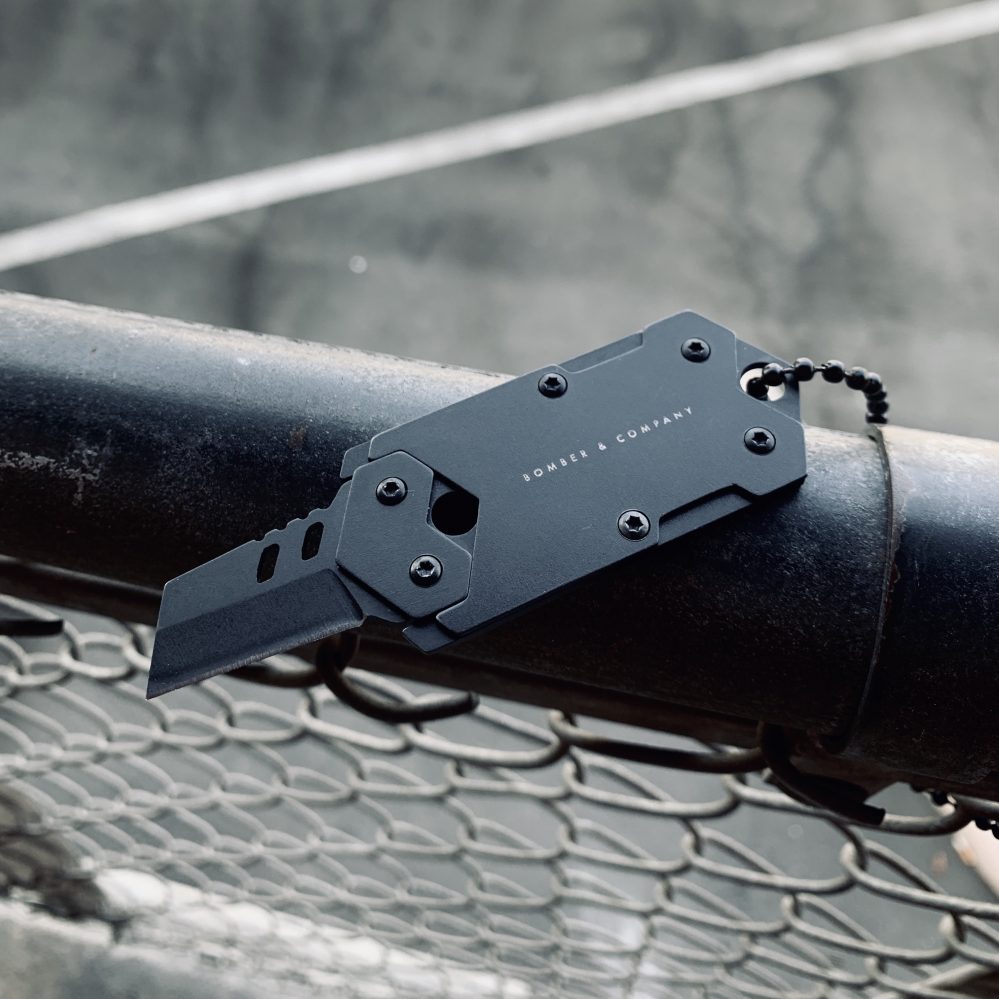 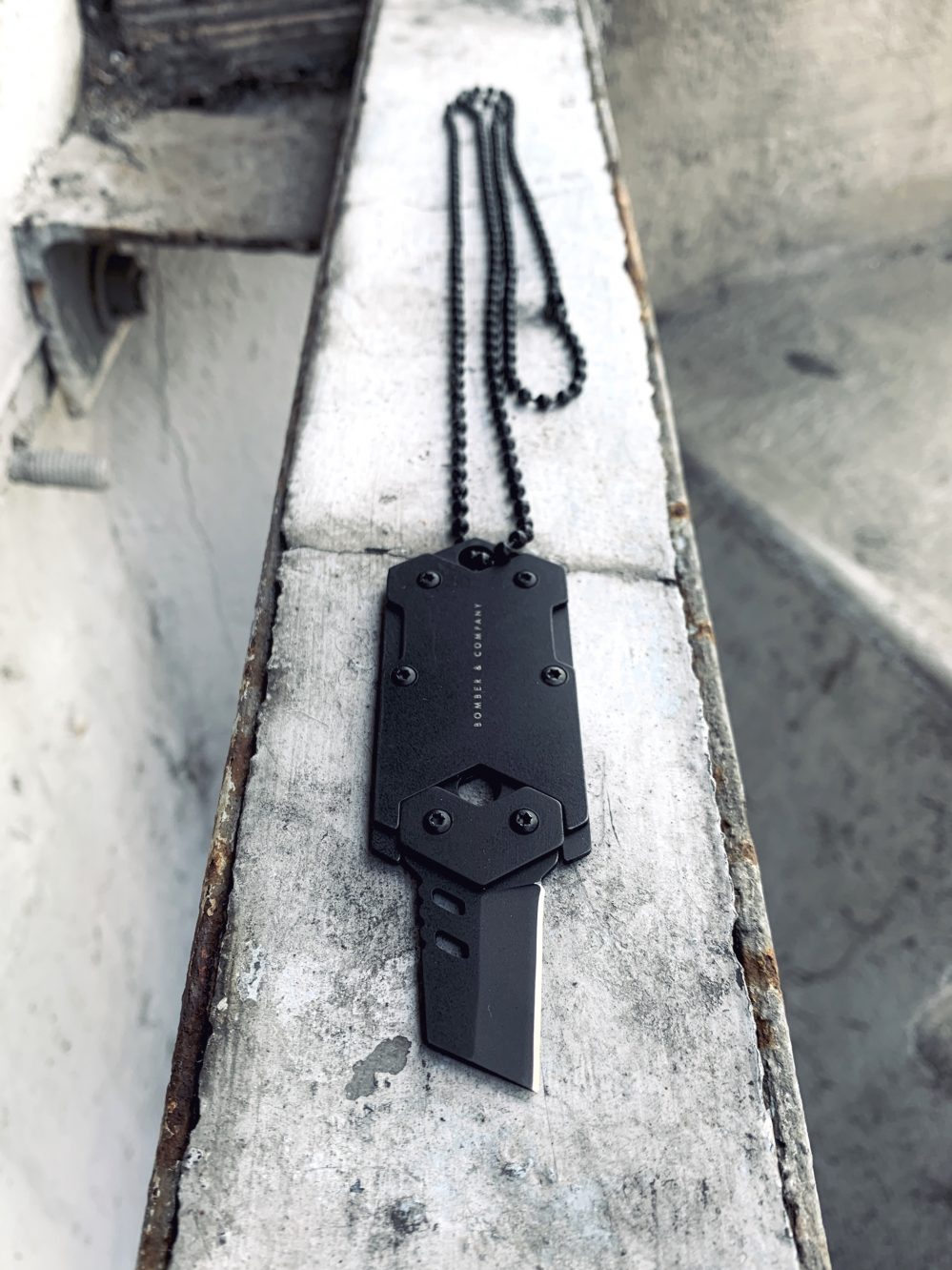 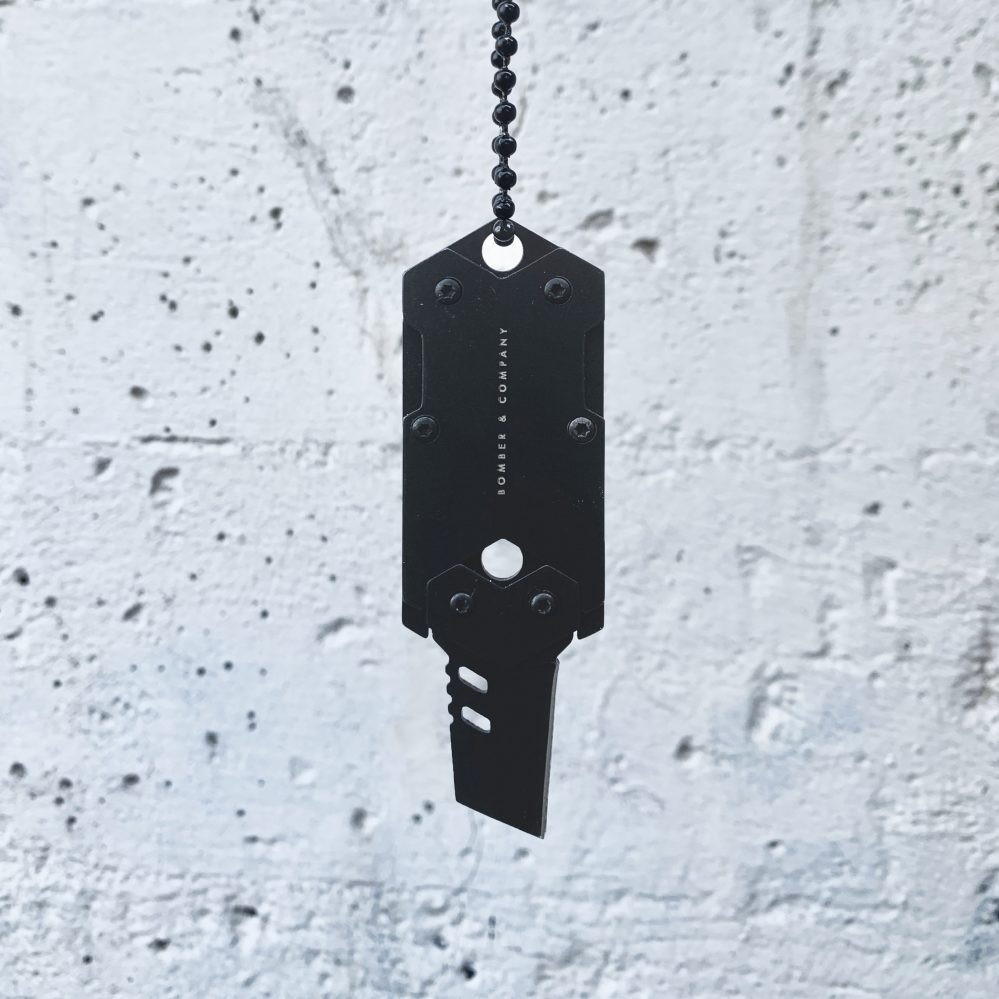 Boasting a butterfly lock for increased safety, the team at Bomber & Co wanted this piece of EDC to be as accessible for beginners as well as intermediate knife experts. The lock is released by squeezing both sides of the B-2 Dog Tag and engaged automatically when let go. This makes the knife design much more robust than traditional smaller blades which are just folding with no locks. The user can feel and hear the tactile sound and click on the lock. Once locked into place, the blade is completely tight and will not move.

For those serious about their EDC, a pocket knife is an essential addition to your line up and this one on Kickstarter is unquestionably the coolest and stealthiest looking we’ve come across here at Coolector HQ. Extremely well crafted and just about as functional as it gets, it’s really not hard to see why this small but perfectly formed bit of kit has positively flown past its target on the crowdfunding platform as it is snapped up by eager EDC aficionados. 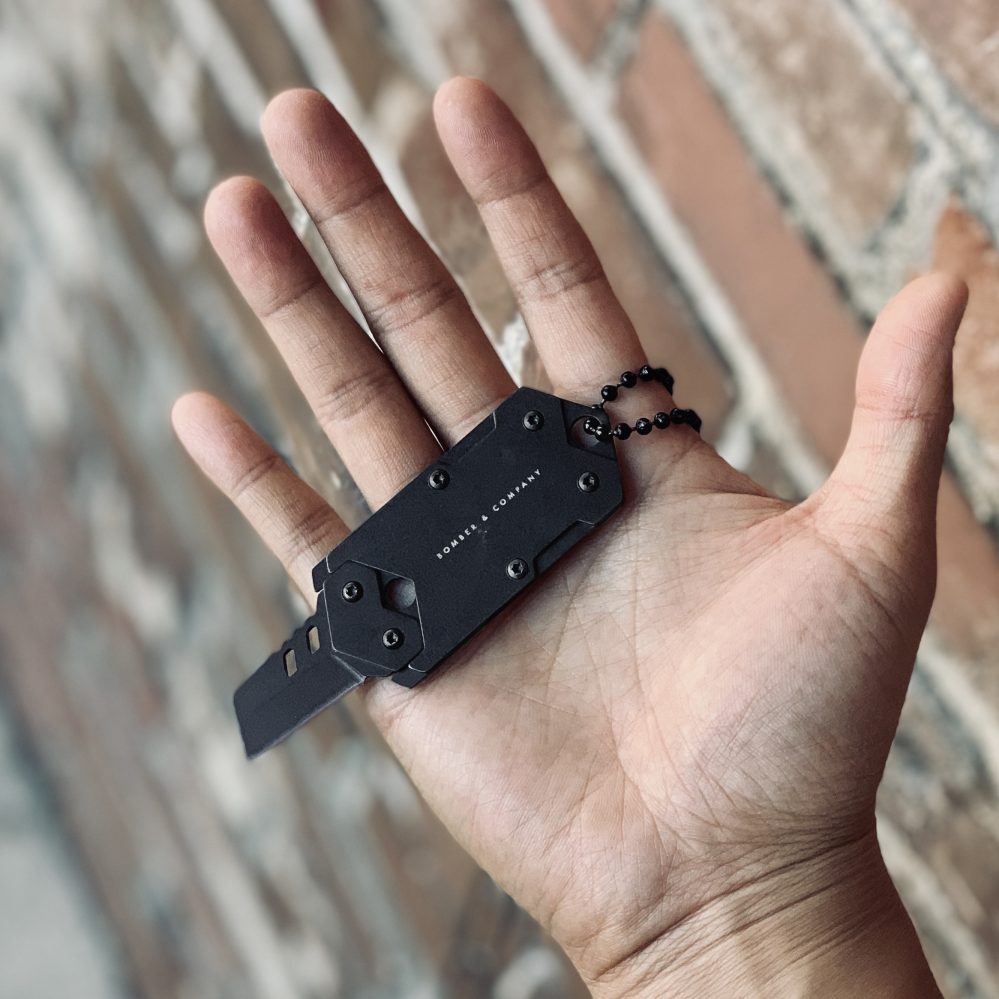 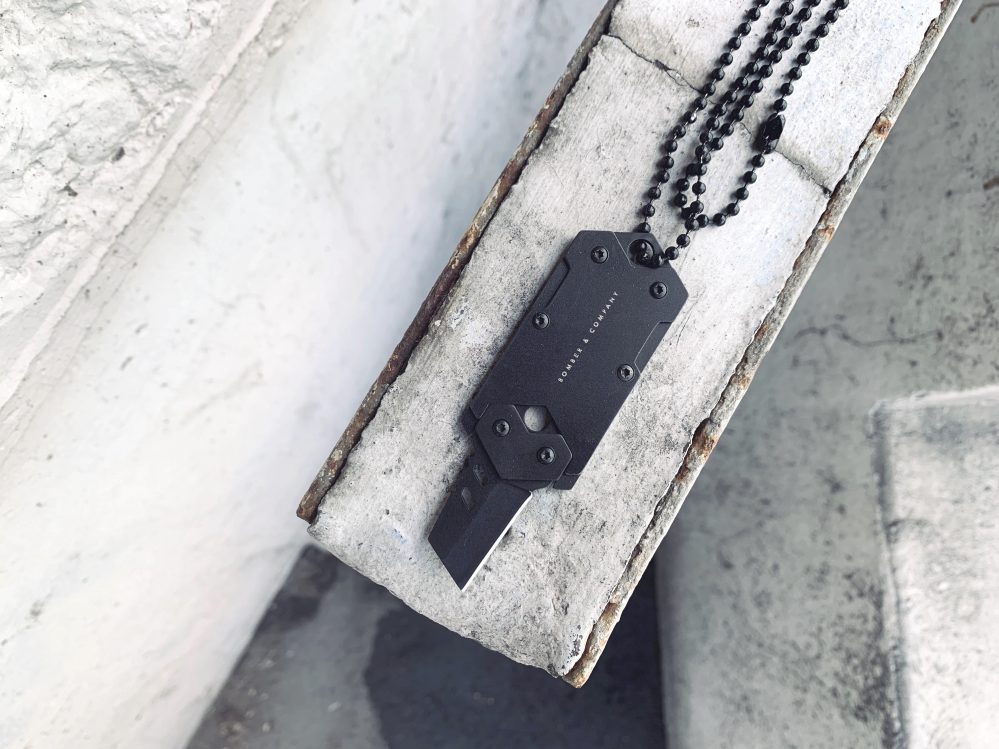 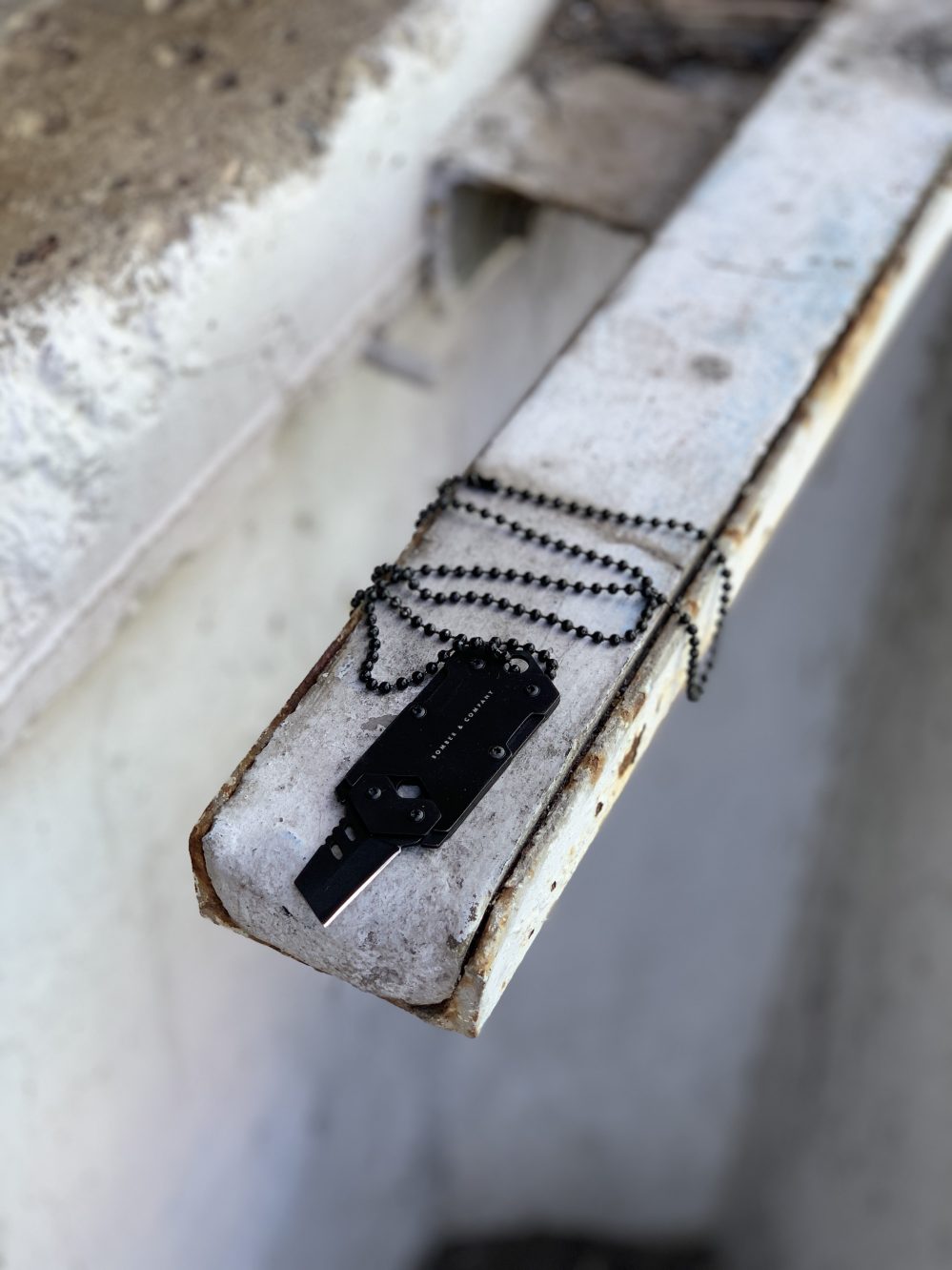 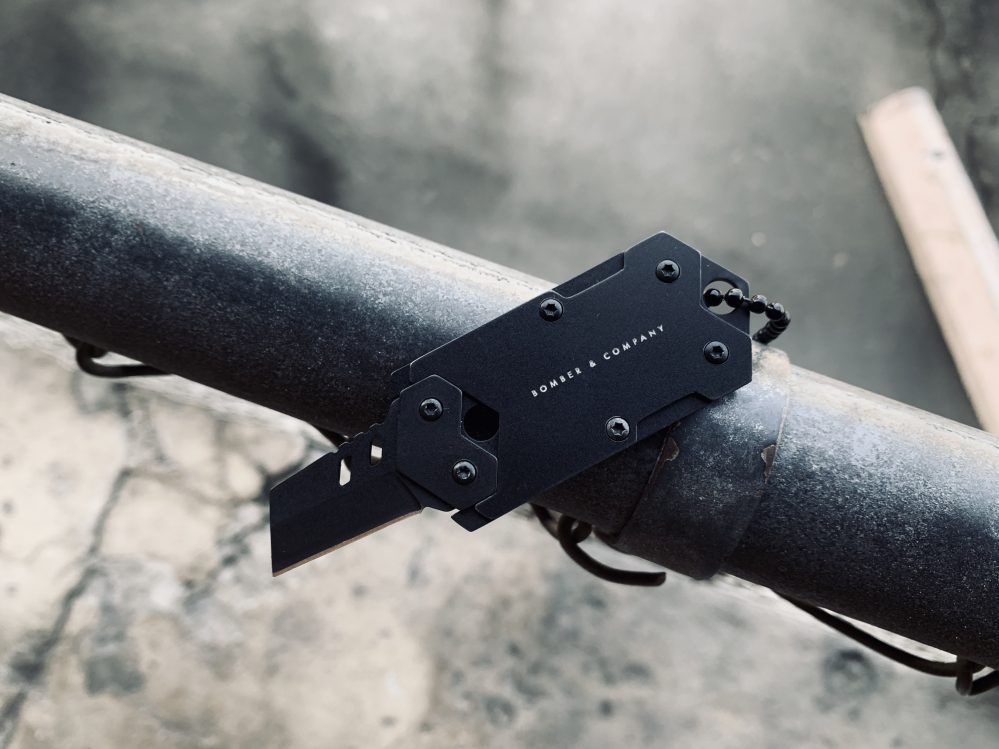 Excellently priced at just $40 during the Kickstarter campaign, you don’t have to break the bank to add this B-2 Dog Tag Concealed Nano Blade Pocket Knife to your line up of accessories. It will come in handy in all manner of day to day situations and the fact it is so robust and hard wearing means it will be a mainstay of your EDC line up for many years to come. Make sure you grab yours for a bargain price over on Kickstarter now.