We love American watchmakers here at The Coolector and it is with great delight that we see more and more of them making a name for themselves in the world of horology of late and challenging the monopoly that Swiss watchmakers have on the market. One of the finest American watchmakers we’ve come across in the last few years is undoubtedly that of Detroit Watch Co and it’s because of timepieces like the M1-Woodward® Moonphase Exhibition Watch that they are so well-regarded within what is a highly competitive industry. 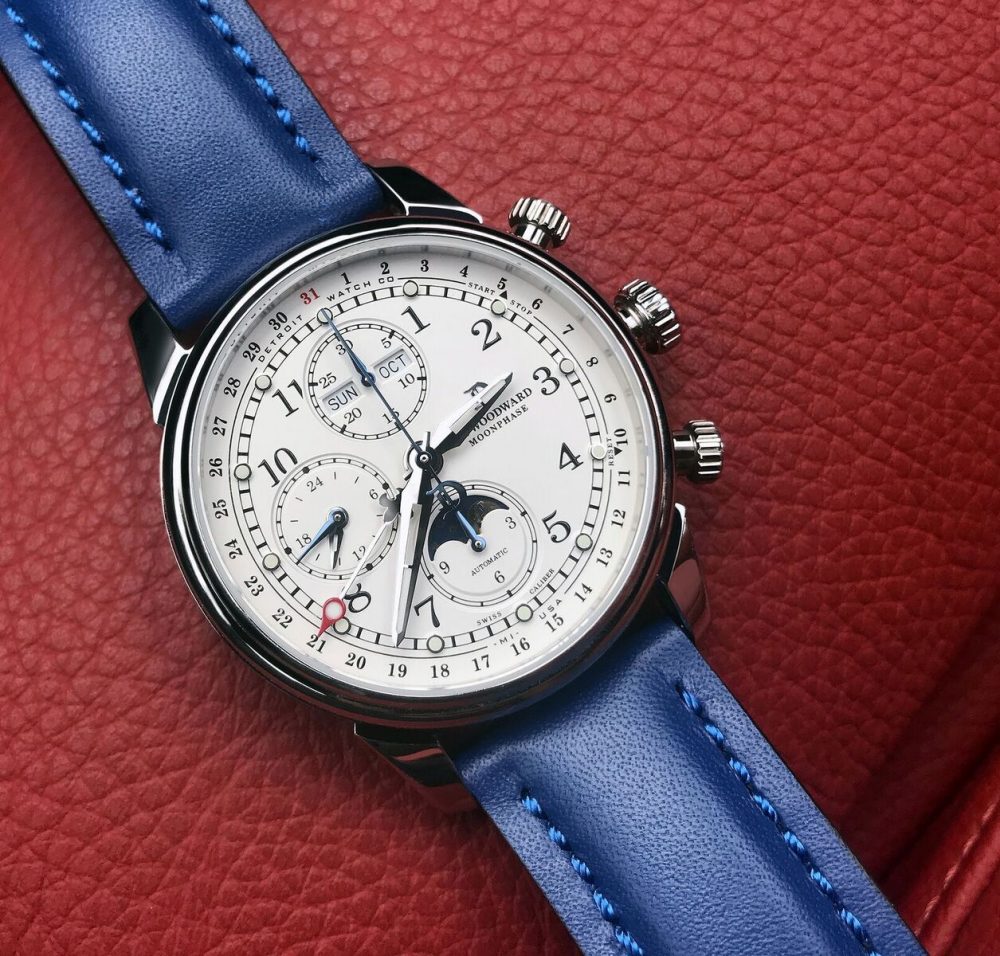 The M1-Woodward® Moonphase Exhibition Watch from Detroit Watch Co has a price tag of $2550 and this represents somewhat of a steal in our opinion here at The Coolector because, quite frankly, there aren’t many timepieces out there that offer so much for such a reasonable price tag. This majestic looking timepiece from Detroit Watch Co is a 42mm, Swiss automatic timepiece that is available in a number of different strap combinations and it boasts an unparalleled elegance and will add more than a touch of gravitas to your wrist in 2019.

There is something about moon phase watches that we find irresistible here at Coolector HQ and this M1-Woodward® Moonphase Exhibition Watch from Detroit Watch Co is definitely one of the classiest we’ve encountered to date. Named after a highway which is notably referred to as Detroit’s Main Street and follows the route of the old Saginaw Trail that linked Detroit with Pontiac, and at the time, Flint and Saginaw, this timepiece has a great inspiration and even better finish that sets it apart amongst American watchmakers. 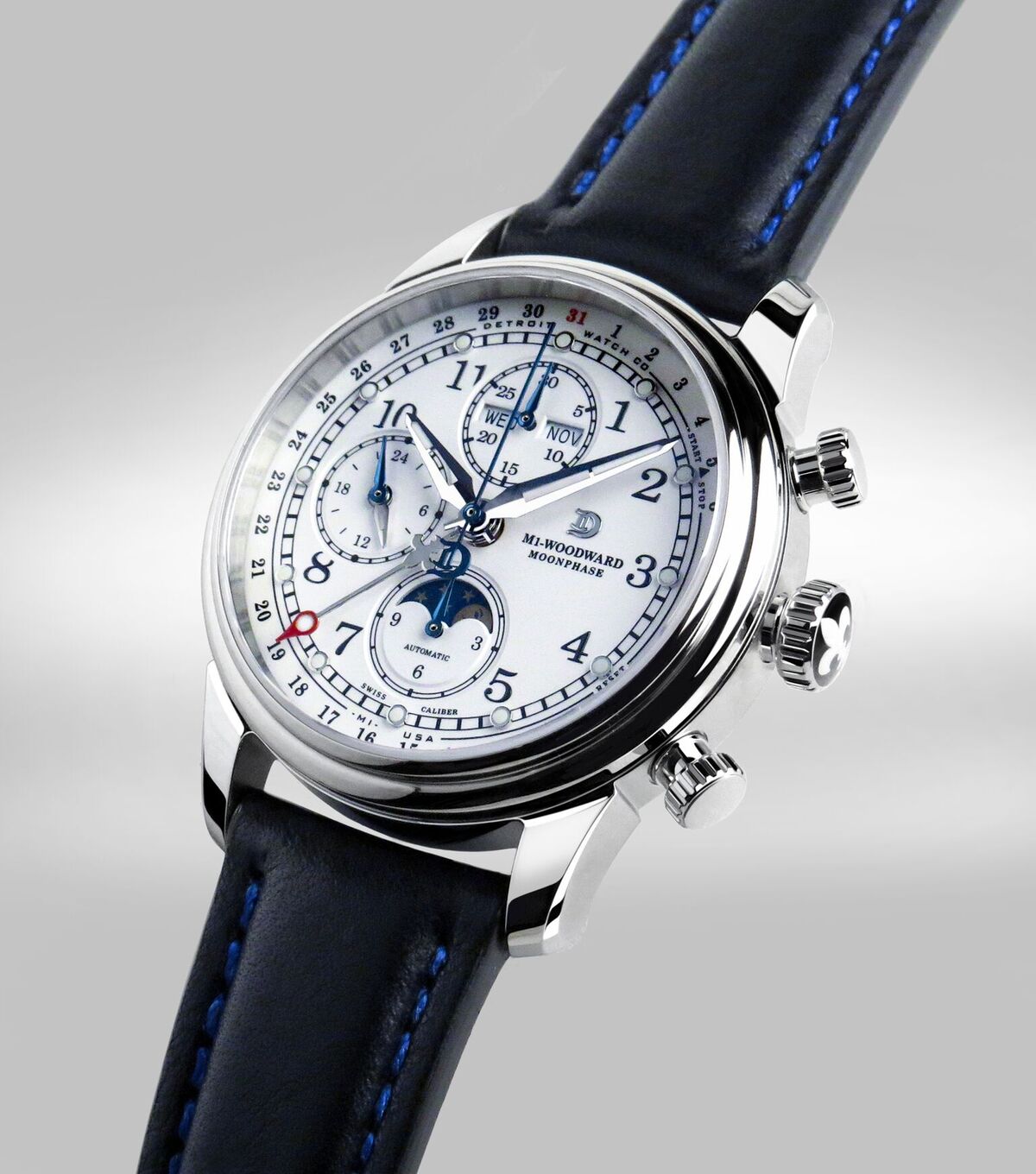 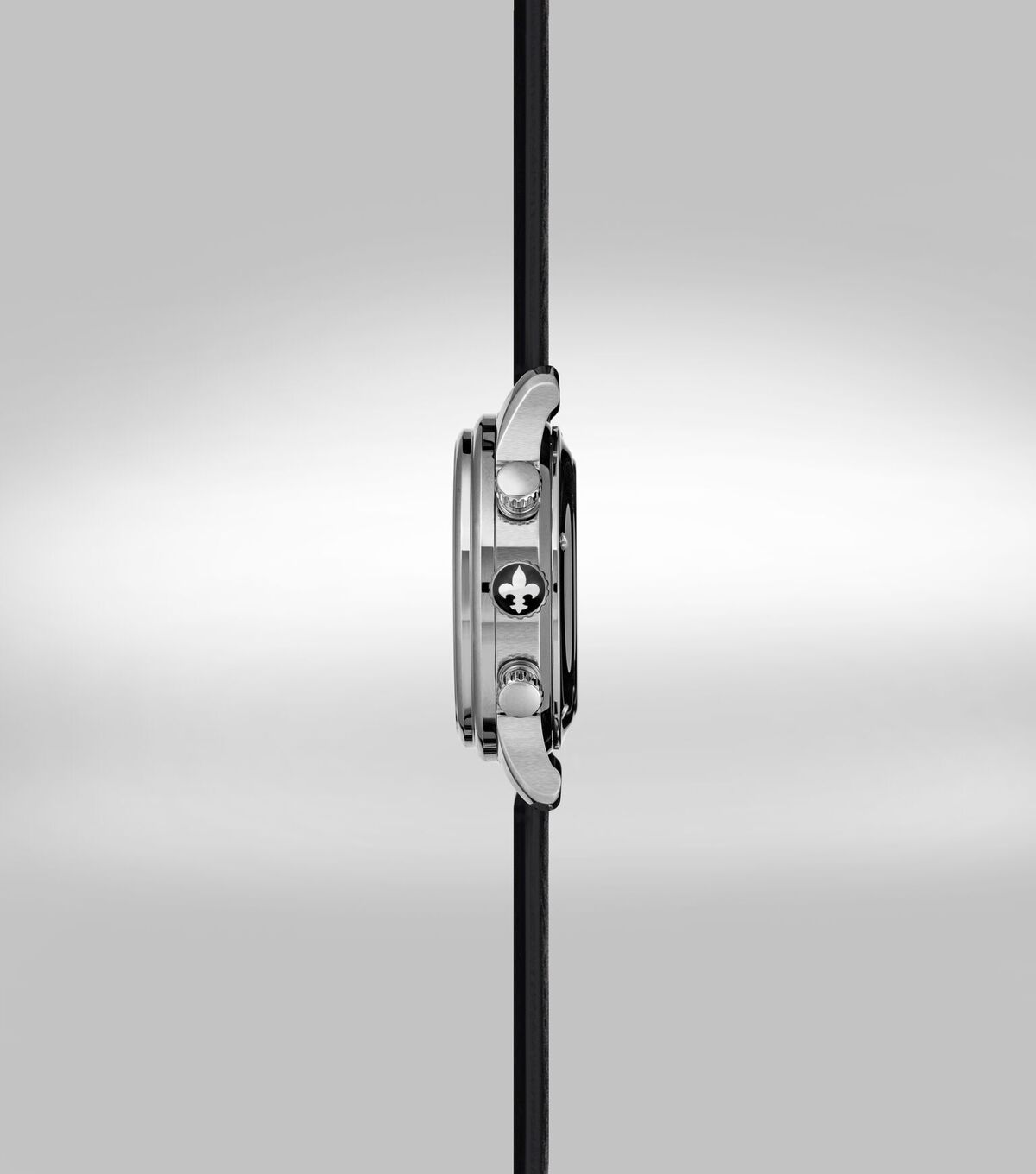 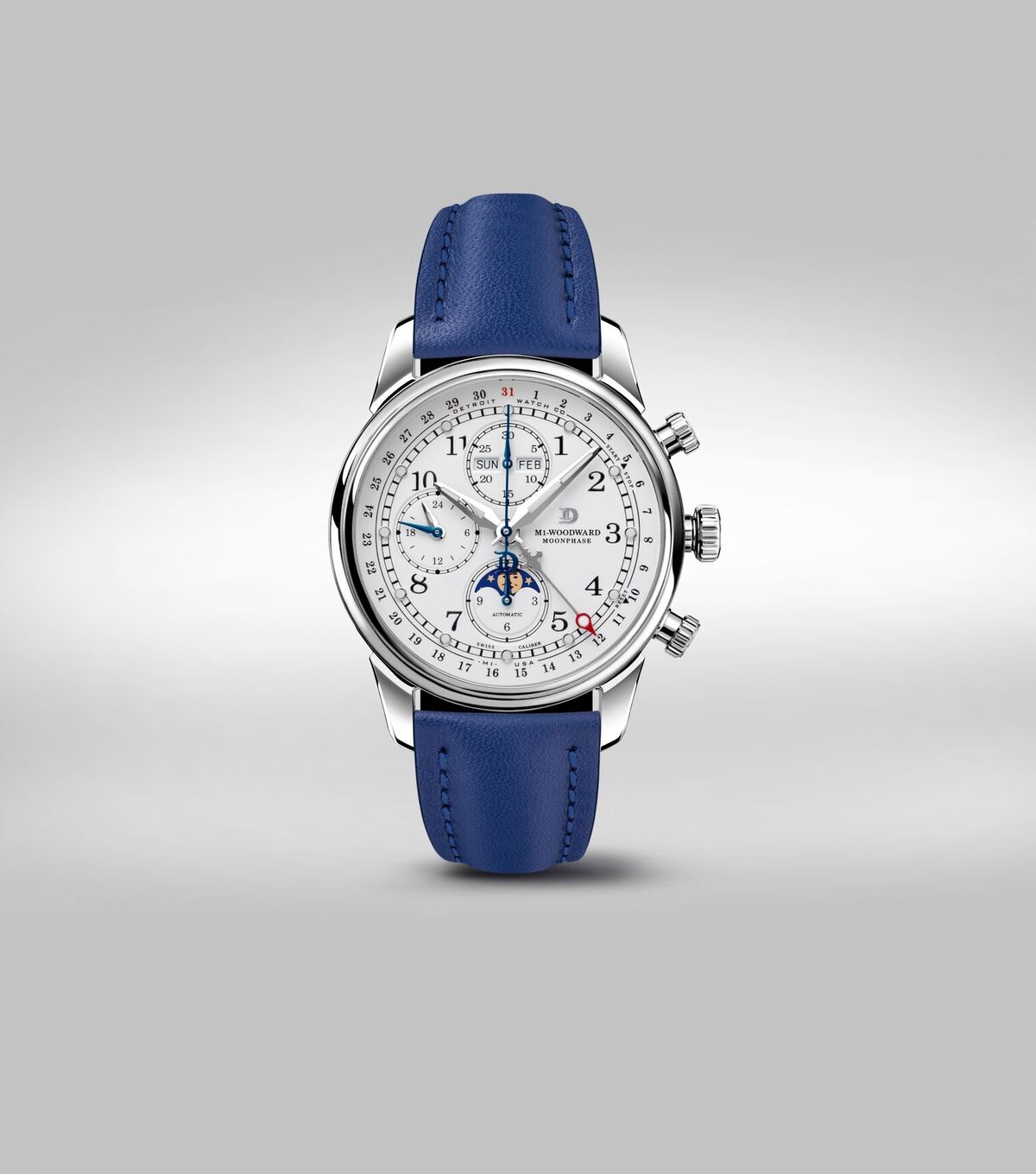 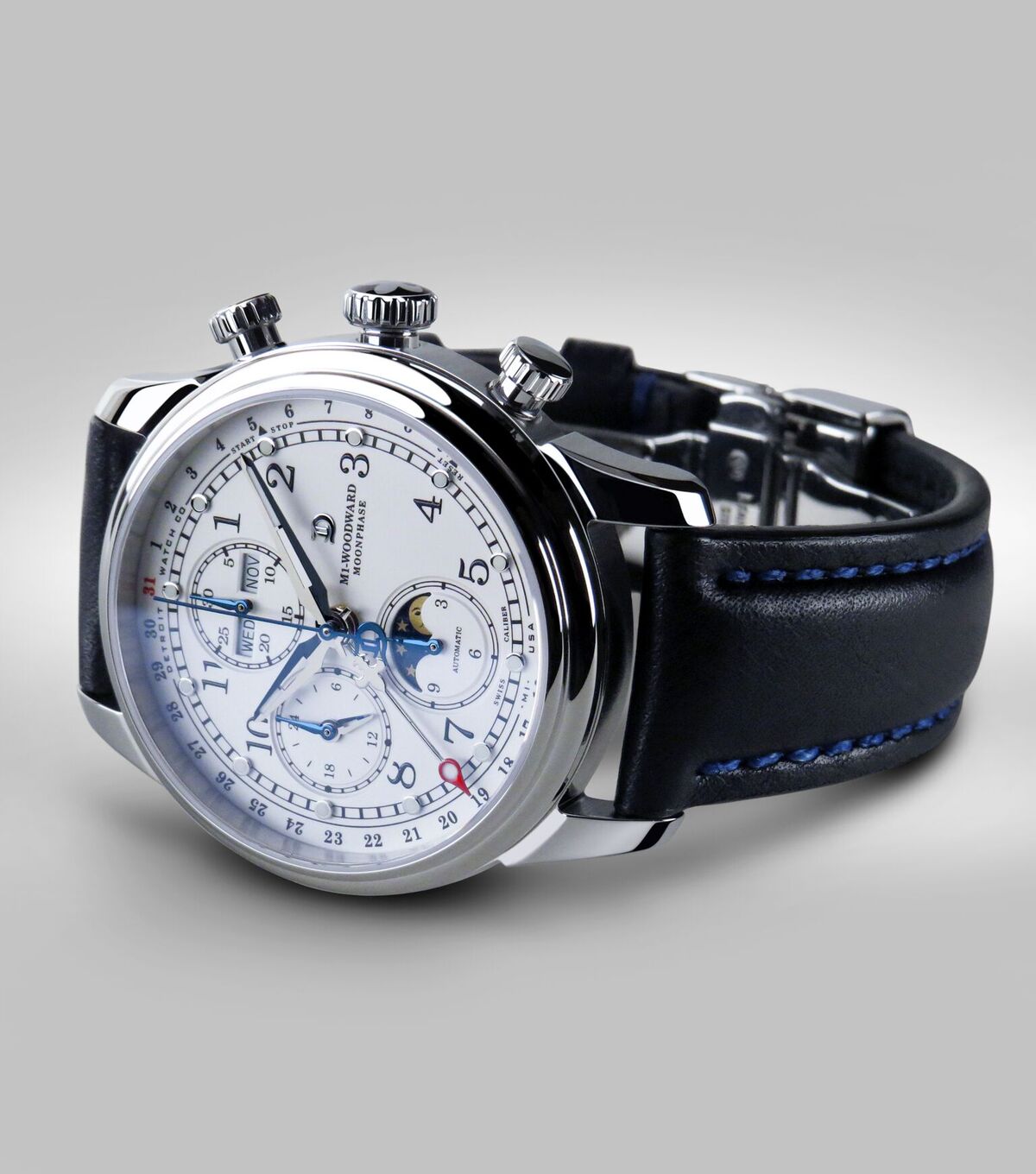 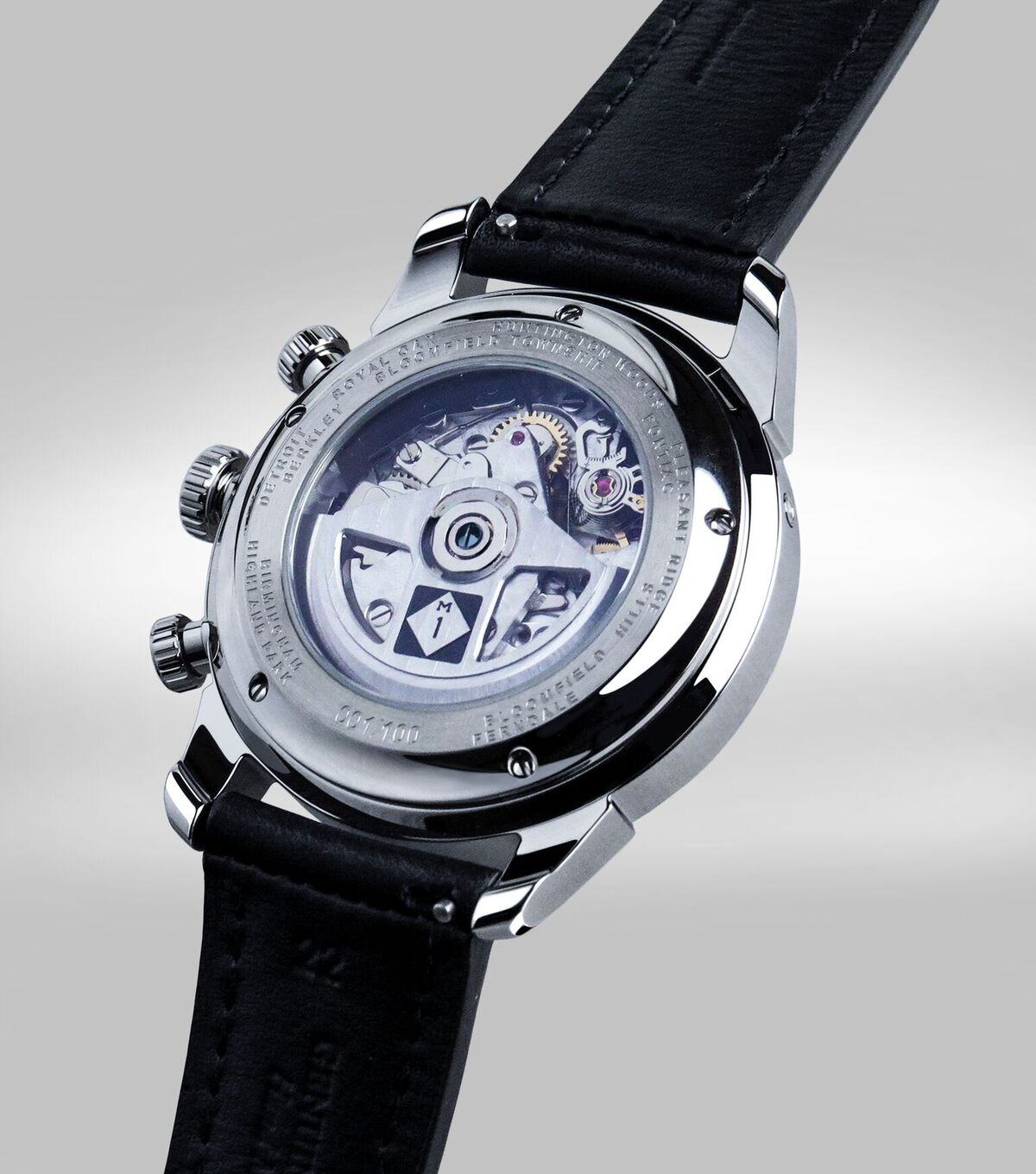 The M1-Woodward® Moonphase Exhibition Watch from Detroit Watch Co ($2250) is heavily influenced by the story of Woodward Avenue in Detroit which was created after a devastating fire in 1805 and is one of five principal avenues in Detroit devised by Augustus B. Woodward as part of a street plan intended to make Detroit the Paris of the West, by replicating it’s wide avenues. Woodward Avenue was the location of the first mile of concrete roadway in the entire country and in 1970, bore the M1 designation. By 1958, Woodward Avenue was the place to be for unofficial car racing and today continues to celebrate Detroit’s automotive history and this impeccable timepiece is a celebration of this iconic area of Detroit. 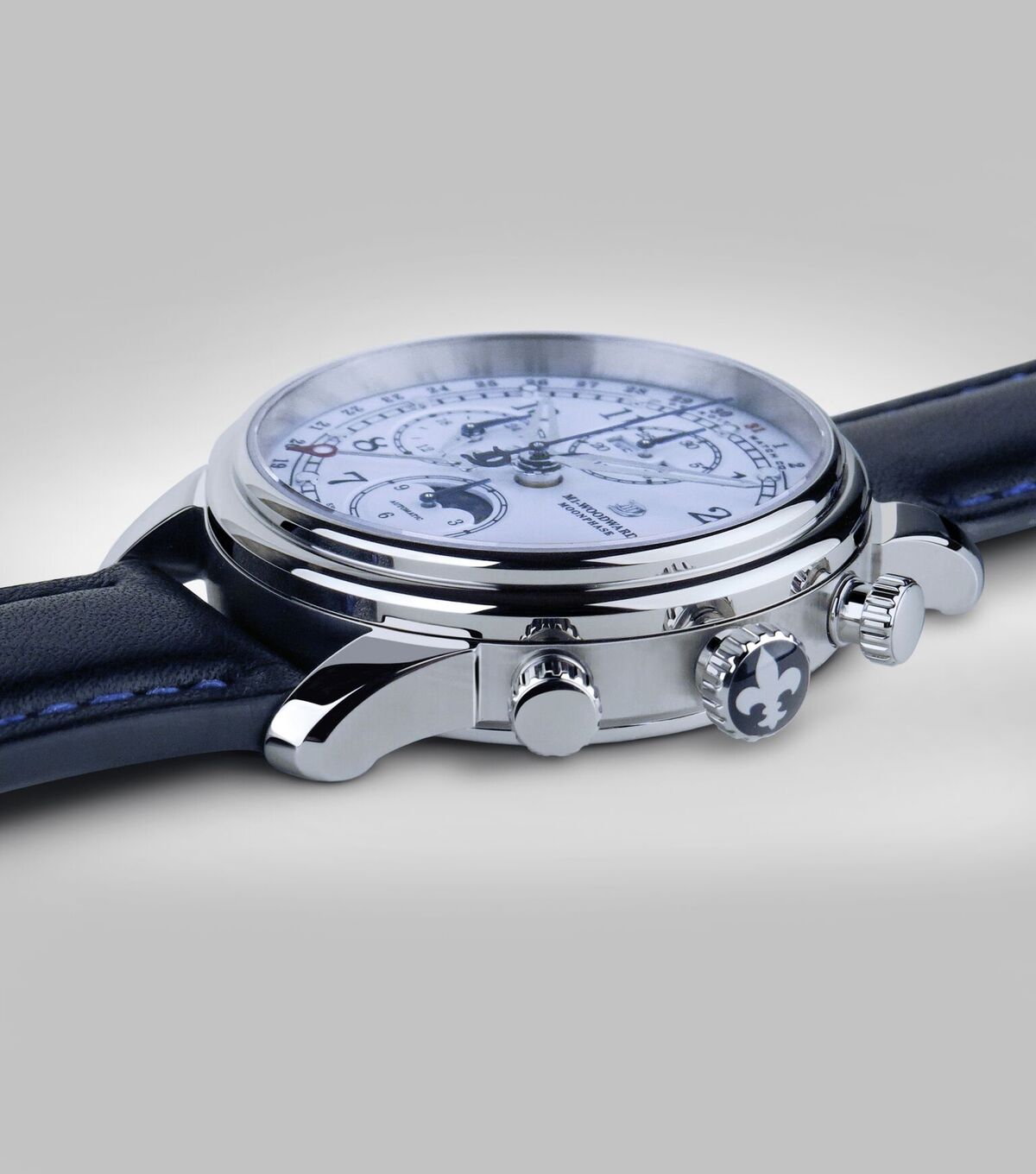 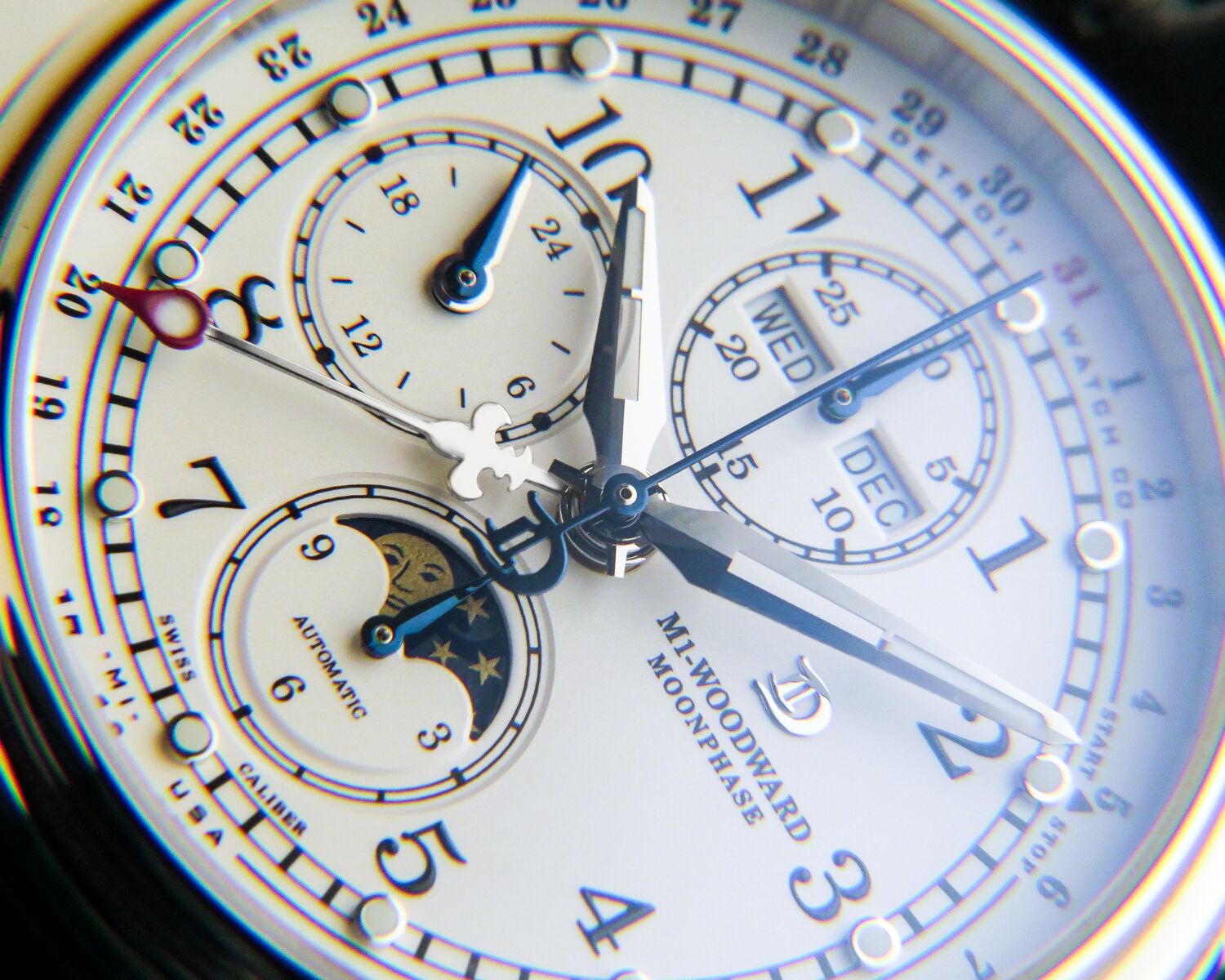 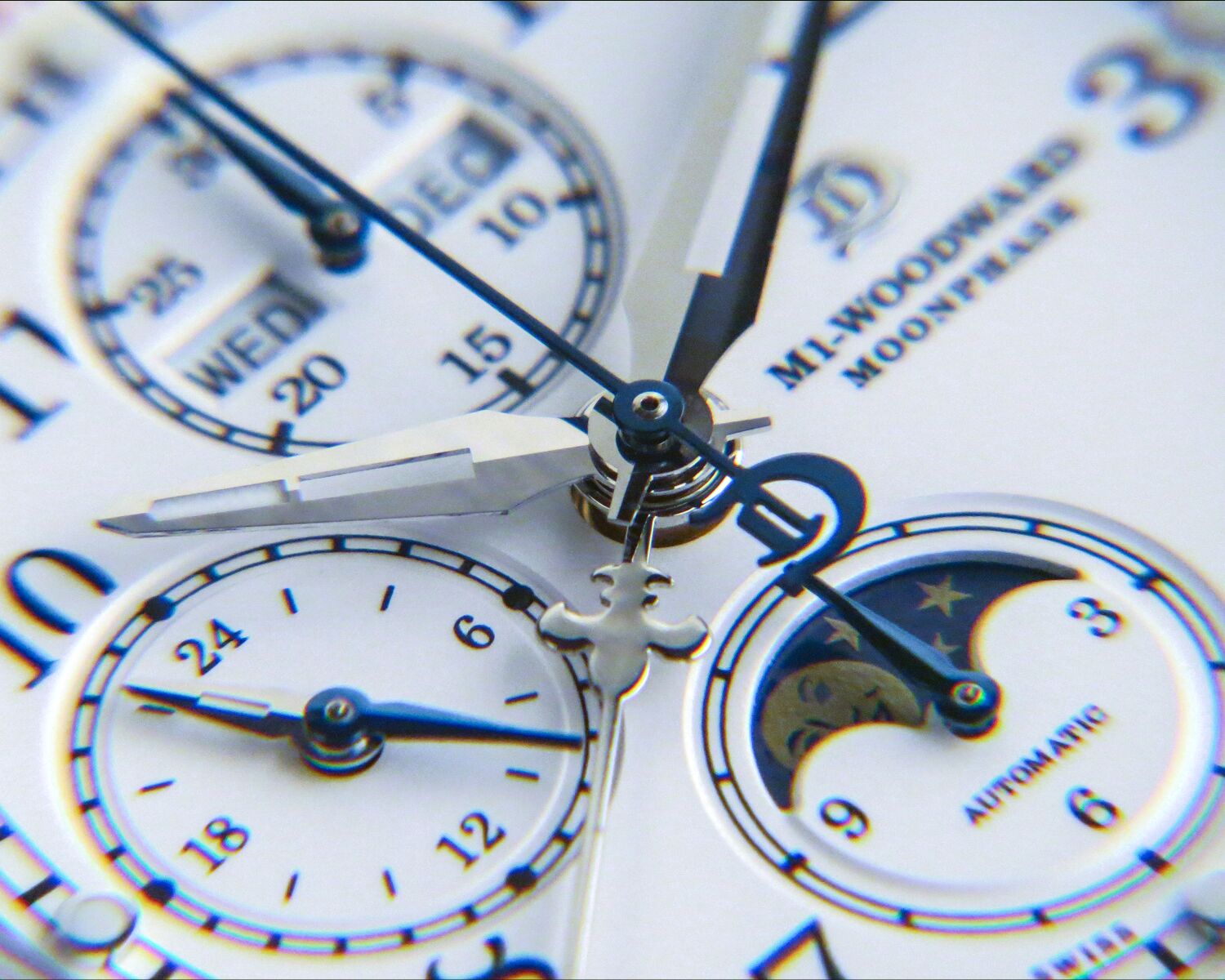 Wonderfully eye-catching, the M1-Woodward® Moonphase Timepiece as exclusively designed by the Detroit Watch Company, is a real favourite of ours here at The Coolector. It is polished with brushed accents 42mm case and an automatic self-winding 7751 movement alongside polished and blued hands, it is hard not to be won over by its considerable visual impact. The crown has the black and white Detroit Fleur-de-Lys for that extra touch of authenticity. The Woodward chronograph caseback displays all cities Woodward Avenue crosses from Detroit to Pontiac and this adds a real level of visual engagement to the already thoroughly impressive watch.

The movement incorporated within the M1-Woodward® Moonphase Timepiece is impressive to say the least and consists of a decorated Swiss Valjoux Eta 7751 Automatic & Manual Winding 25 jewels, Chronograph, Shock-absorber-Incabloc, Nivarox Hairspring, Glucydure Balance, 28800 Vibrations Per Hour, 4Hz and, last but not least, an impressive 48-Hour Power Reserve as well. It has a 50m water resistance and the strap is made of calf leather with deployant clasp and quick release spring bars so it sits perfectly on the wrist. 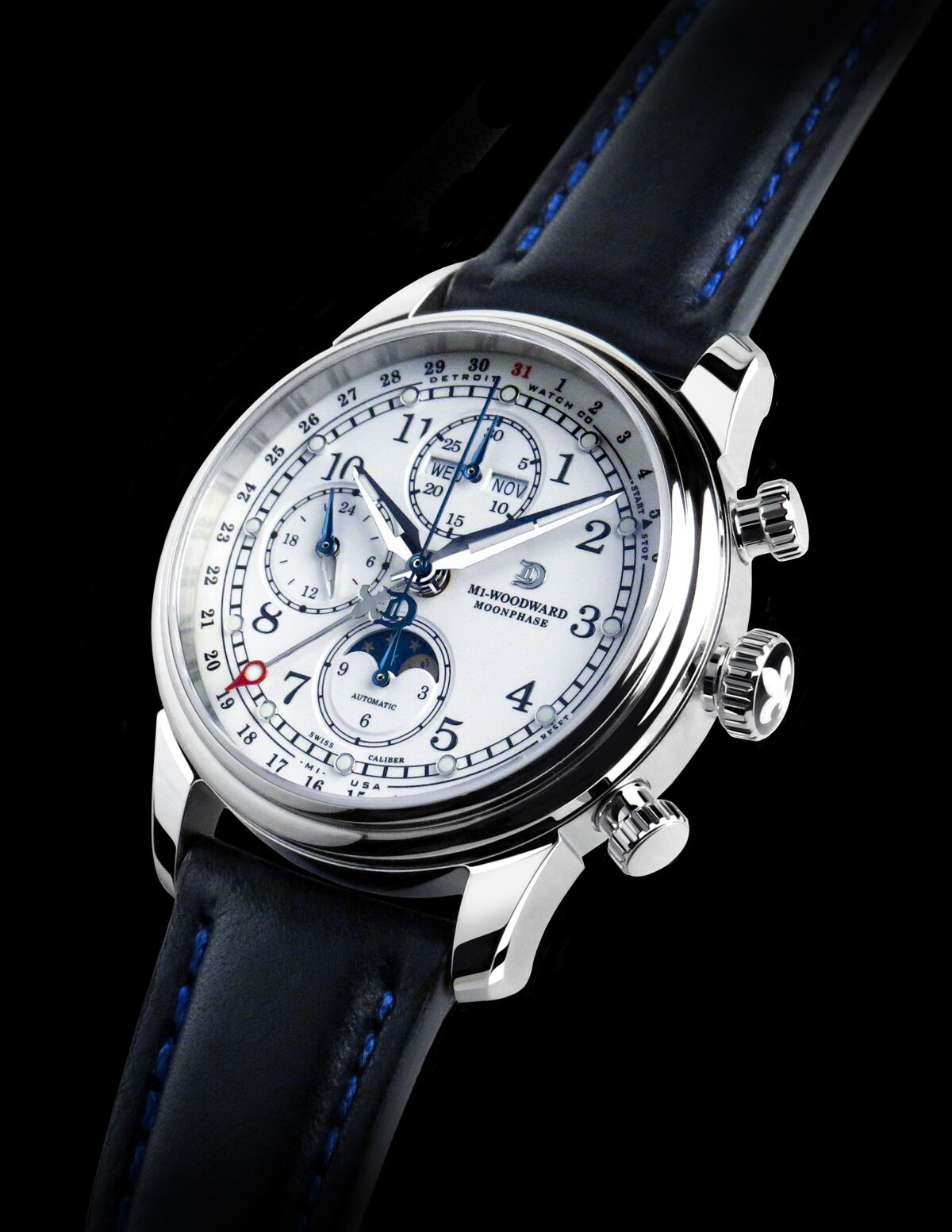 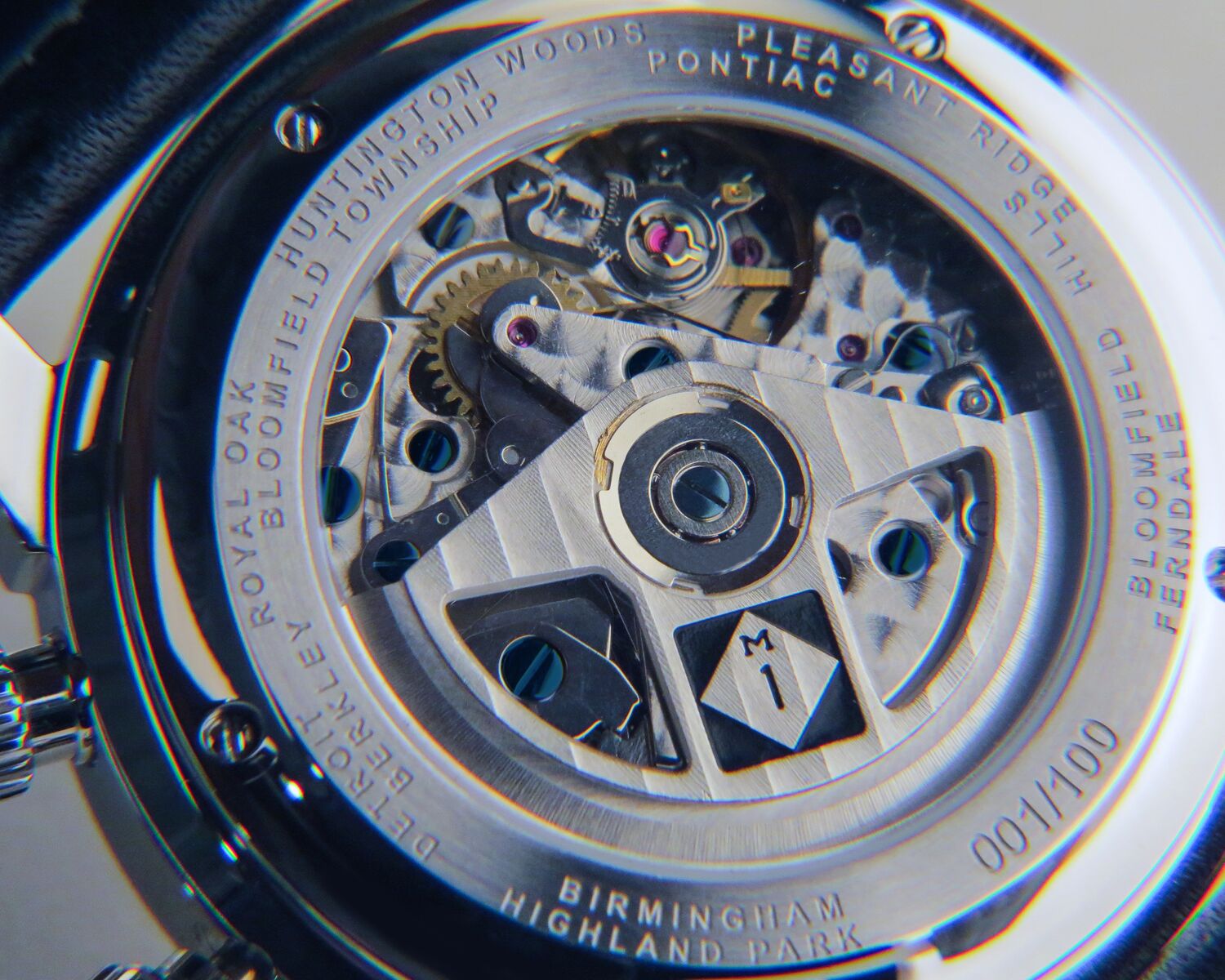 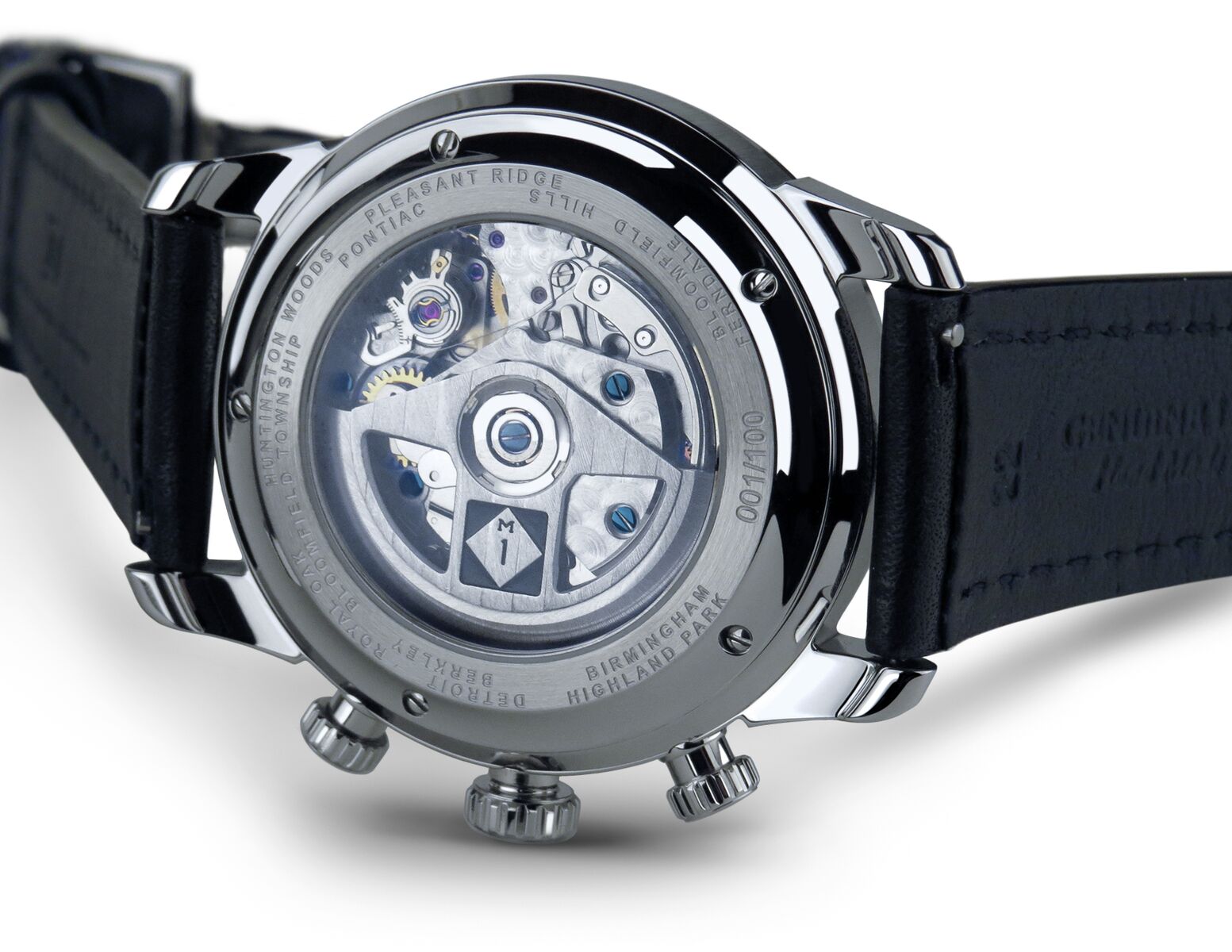 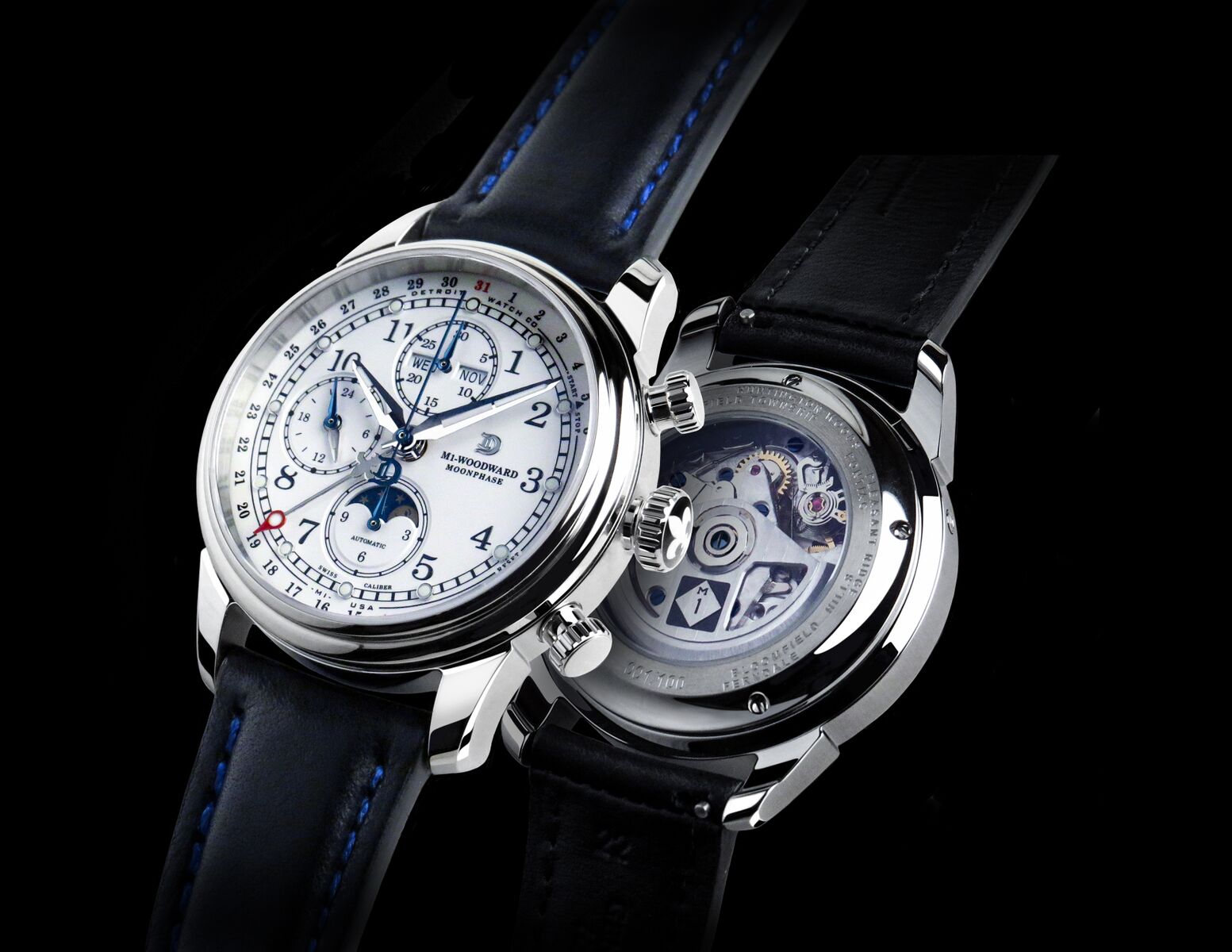 Detroit Watch Co are a brand we’ve been aware of for some time now here at The Coolector and they just keep getting better and better with the calibre of timepieces that they release. The M1-Woodward® Moonphase could just be their finest to date and it is positively overflowing with luxurious features and has one of the most striking and top performing moon phase indicators we’ve encountered. For those wanting a new luxury watch for their wrist in 2019, Detroit Watch Co have got the prime candidate.