When architects successfully intermingle old and new as effortlessly as is witnessed with this Dual Modern House from KUBE Architects, it’s hard not to be impressed and the finish here is exemplary to say the least. Completed in 2019, this first class piece of architectural design is right up our street here at Coolector HQ and 1200ft² of living space, it offers the owners an excellent and relaxing home in which to unwind. Located in Kensington, USA, the Dual Modern House from KUBE Architects has got a distinctive retro/modern vibe that’s hard to ignore and this renovation and addition to the architect’s own 1950 mid-century modern house, designed by Charles Goodman, consisted of two phases. The existing Goodman structure was renovated 5 years ago, with a new kitchen, bathroom, finishes, windows, mechanical, and electrics. The floor plan was preserved, the kitchen opened up to living space, and bedrooms/bathrooms were renovated to deliver a breathtaking contemporary living space.

The rear addition to the Dual Modern House was recently finished and boasts a cool new den, office, and kids’ hangout space, with two new full bathrooms and a laundry room. Flexibility and versatility was an important factor and was designed into the layout of the property, with flow between spaces and sliding walls that allow for a future change of use. The separate entrance allows for the possibility of an accessory dwelling unit, or in-law suite. 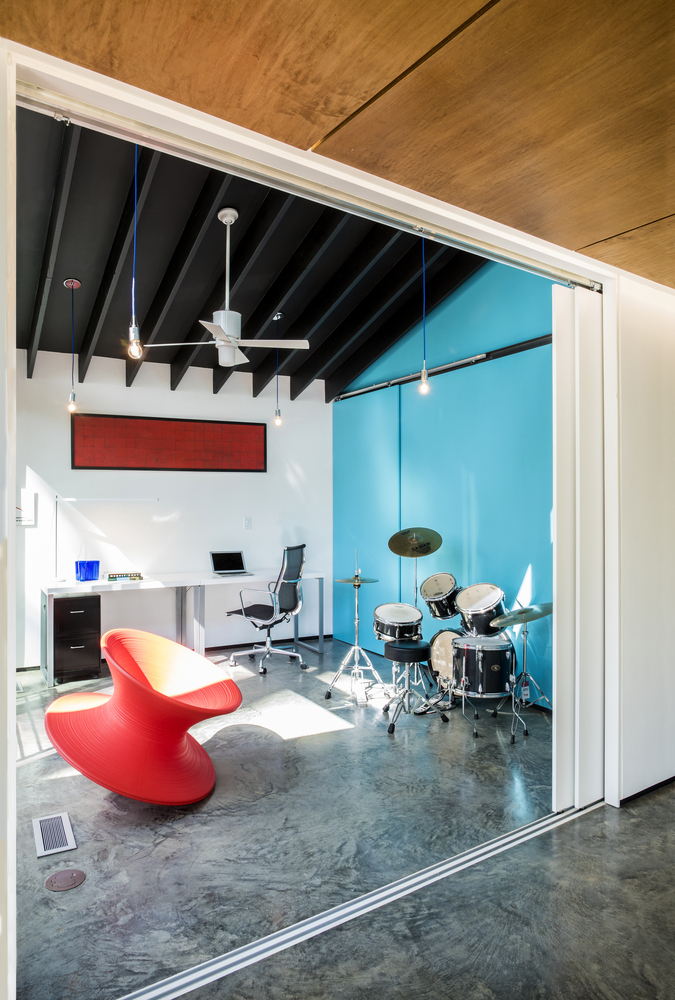 Effortlessly cool with an excellent combination of old and new design and structures, the Dual Modern House from KUBE Architects sees the new addition  separated from the existing structure with a courtyard between the two. The addition makes use of the same basic tenets of Goodman’s architecture: large expanses of glass exposed structural elements, and an indoor-outdoor relationship. It follows the size and proportions of the existing pitched roof house but consists of two shed-roofed volumes that flank a central walkway and deliver an impactful visual statement throughout. 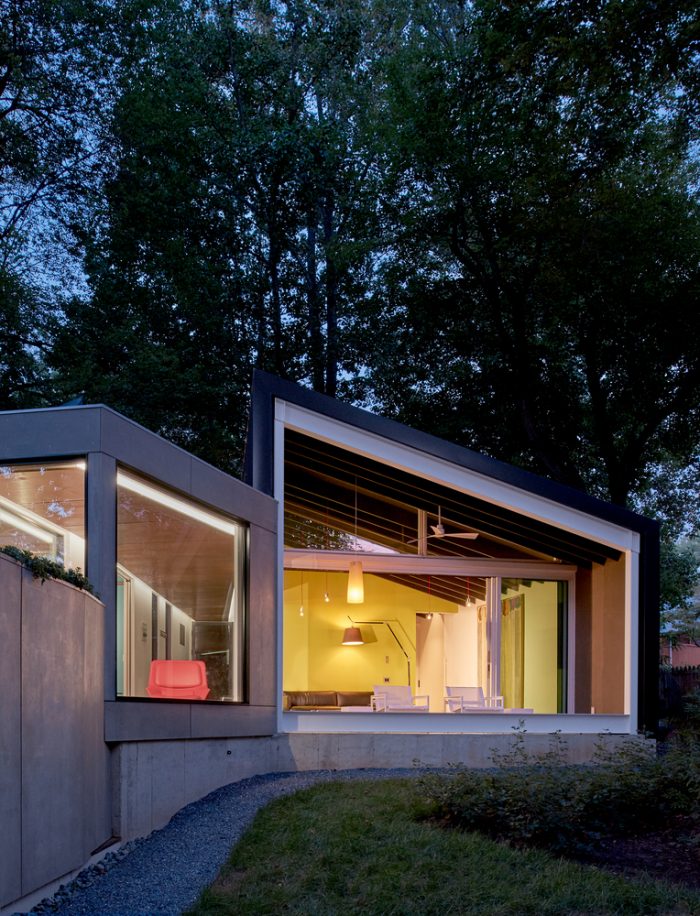 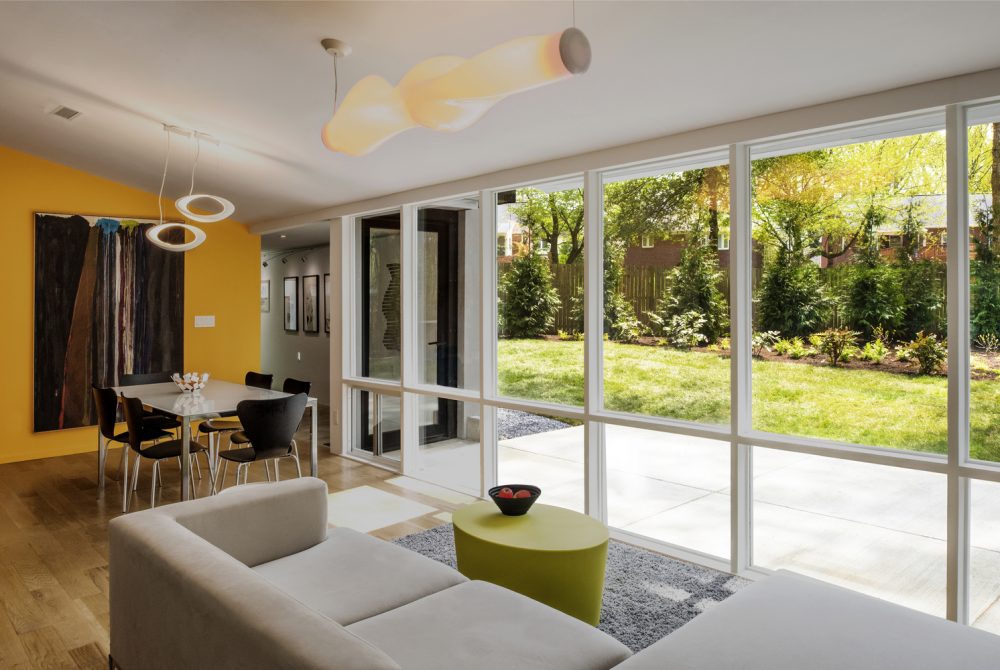 The walkway does a great job of connecting the new to the old, serves as a gallery for art display on the lower level and widens out to a seating area on the upper level. In addition, there is a “landscape wall” which defines this space from the outside, as a contrast to the glass-panelled wall of the existing living room. The pitch of the addition’s shed roofs allows for clerestory windows in all of the living spaces and delivers views of the many large trees on the site, all of which were preserved during construction.

Environmental considerations are at the forefront with the Dual Modern House and it has a green roof on the connecting walkway which acts as a focal point from the new addition while collecting water runoff from the existing house roof. It has a small basement accessed from an outdoor stairway which contains all mechanical equipment and the electrical panel. Ductwork runs underground to the new concrete floors, providing a highly efficient air supply system. Metal roofing wraps down the sidewalls of the new structure, draining water to linear gravel troughs along the perimeter – so no downspouts or gutters are required. 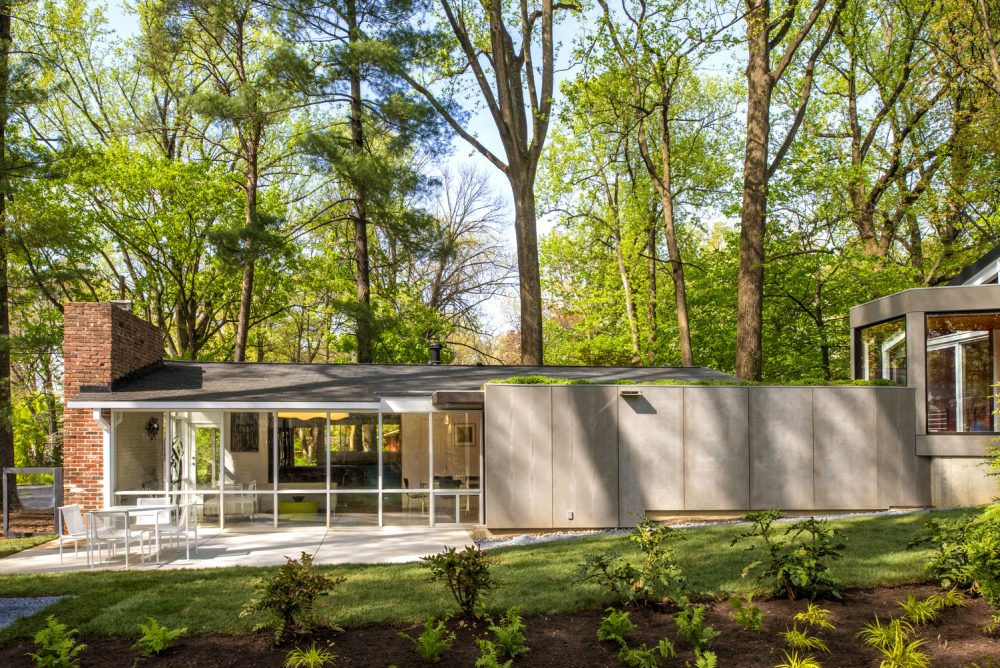 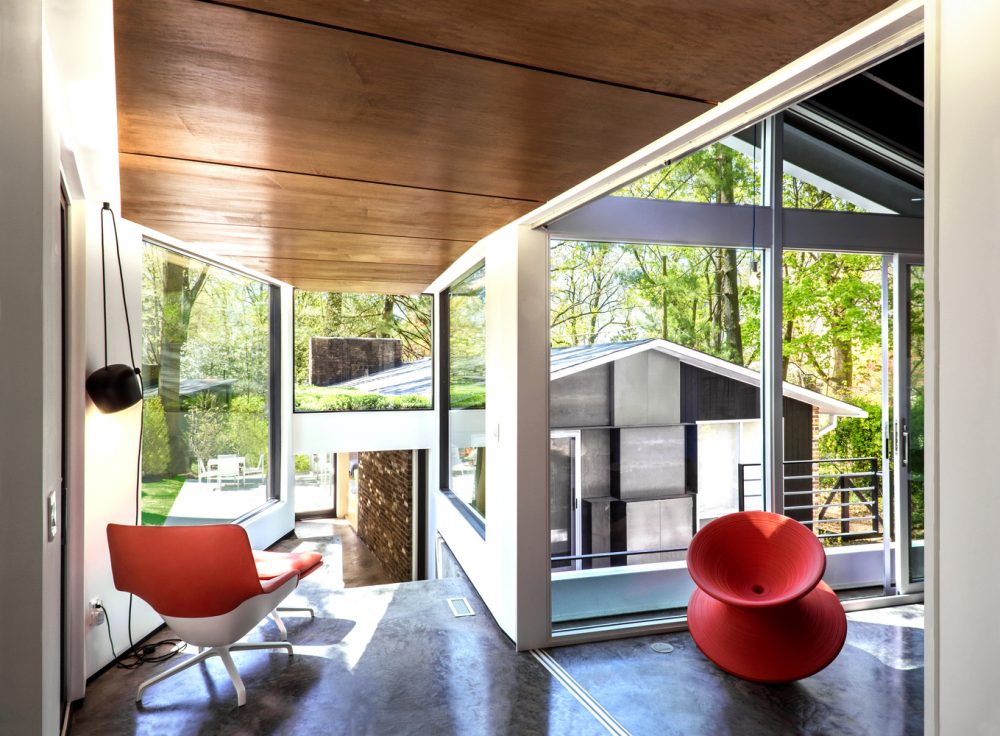 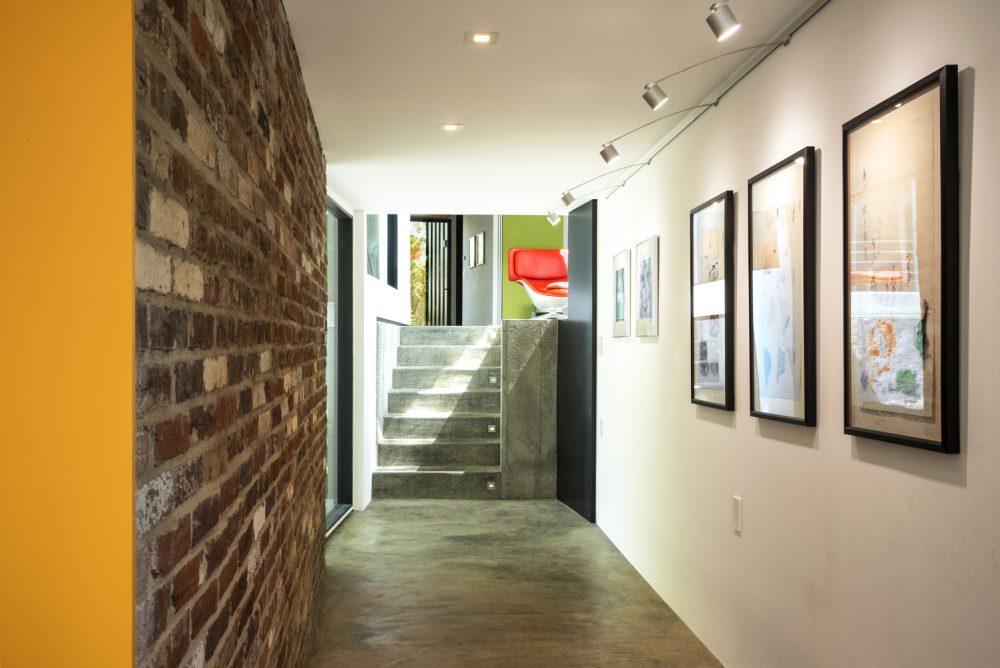 KUBE Architects have excelled themselves with the Dual Modern House which is chock full of clever and intuitive design features and ensures that it works perfectly for the family residing there. This excellent piece of architecture expertly combines different styles of property design and does so in such a way that it works perfectly.