As we’re in the midst of somewhat of a fitness drive here at The Coolector, we’re continually on the lookout for awesome looking catalysts to fitness and, truth be told, they don’t come much more epic than these decidedly ace Onnit Primal Kettlebells.

It wasn’t until recently that we realised the rather impressive array of exercises that can be executed with kettlebells but, let’s face it, most of the ones that you find on the market are pretty mundane to say the least. Well, no more, courtesy of the chaps at Onnit and their epic series of primate themed kettlebells.

Perfectly balanced and crafted from chip resistant iron, these brilliant looking Onnit Primal Kettlebells also boast enlarged handles for increased gripping strength which, given the lofty weights that they go up to, will likely come in handy.

If you’re feeling monstrously strong, you could tackle the Onnit Bigfoot Kettlebell which weighs in at a rather impressive 90 pounds but there are plenty of other sizes for mere mortals like us at The Coolector. Check out a few more shots below: 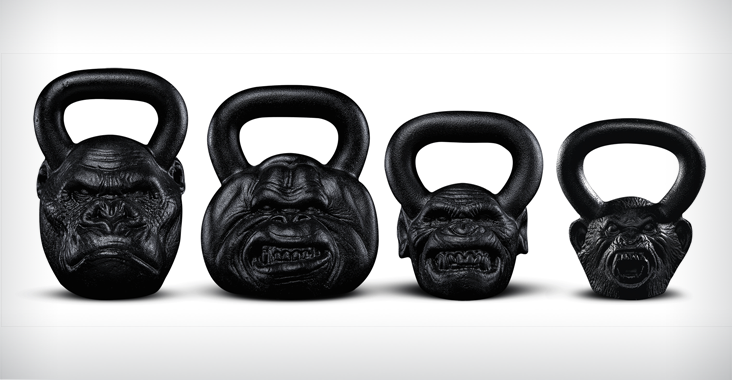 If conditioning and building muscle is top of your fitness agenda, kettlebells will likely be your new best friend and you won’t go too far wrong with these awesome offerings from the guys at Onnit who certainly know their stuff when it comes to fitness and building strength.

We’re big fans of the primate theme of these super cool looking kettlebells from Onnit and whilst we’re not yet (or likely ever) at a point to tackle their Bigfoot offering, there’s still plenty for us to get to work with.