We love luxury watches here at Coolector HQ and always have a soft spot for when the high end Swiss watchmakers collaborate with other brands to create limited edition timepieces and TAG Heuer have got in on the action with this top notch offering made in conjunction with The Hour Glass. This striking timepiece is based upon one of the luxury Swiss watchmaker’s Monaco timepieces and for those who like to stand out with their choice of accessories, this will definitely do the trick. 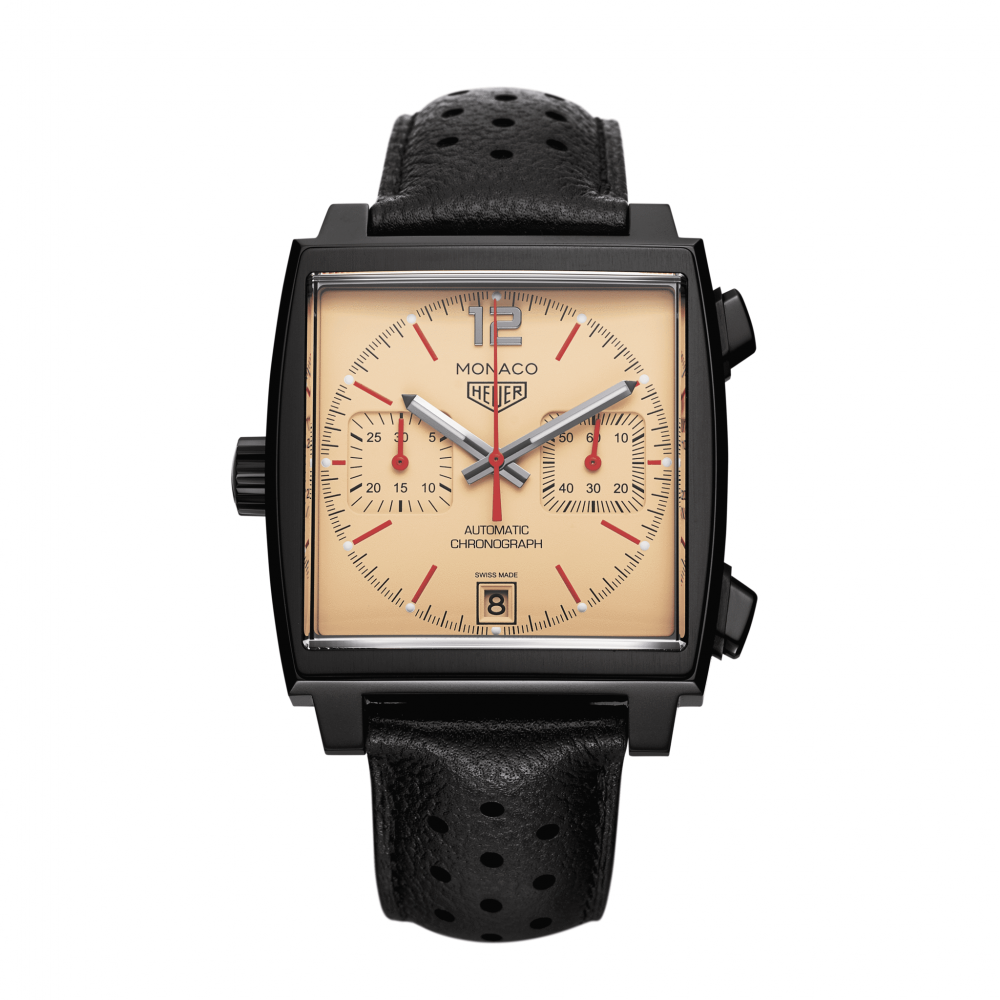 The TAG Heuer x The Hour Glass Commemorative Watch has a price tag just shy of £5k which for both a TAG Heuer Monaco and a limited edition offering to boot, is a mighty fair price in our opinion here at The Coolector. Boasting a highly pleasing and distinctive Champagne coloured dial, this watch is a celebration of the 50th anniversary of the TAG Heuer Monaco and the 40th anniversary of The Hour Glass and it is unquestionably one of the classiest looking watches you can get on your wrist in 2019.

What’s in a Name?

Though it’s a celebration of two milestones, the colour of the dial on this TAG Heuer x The Hour Glass Commemorative Watch isn’t quite champagne and is called beige opaline to be precise but it’s certainly a fitting colour for such a celebratory timepiece. Every element of the TAG Heuer Commemorative Edition from The Hour Glass has been carefully designed to maximise legibility. Its 39 mm-wide PVD case channels the wearers gaze towards a high-contrast information-rich dial that is a visual delight. 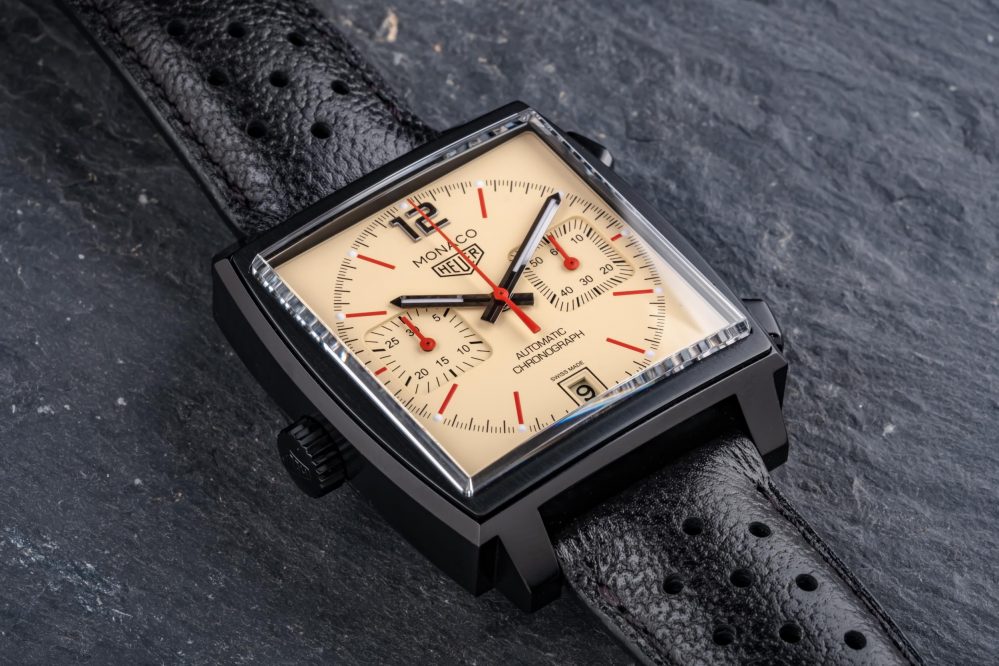 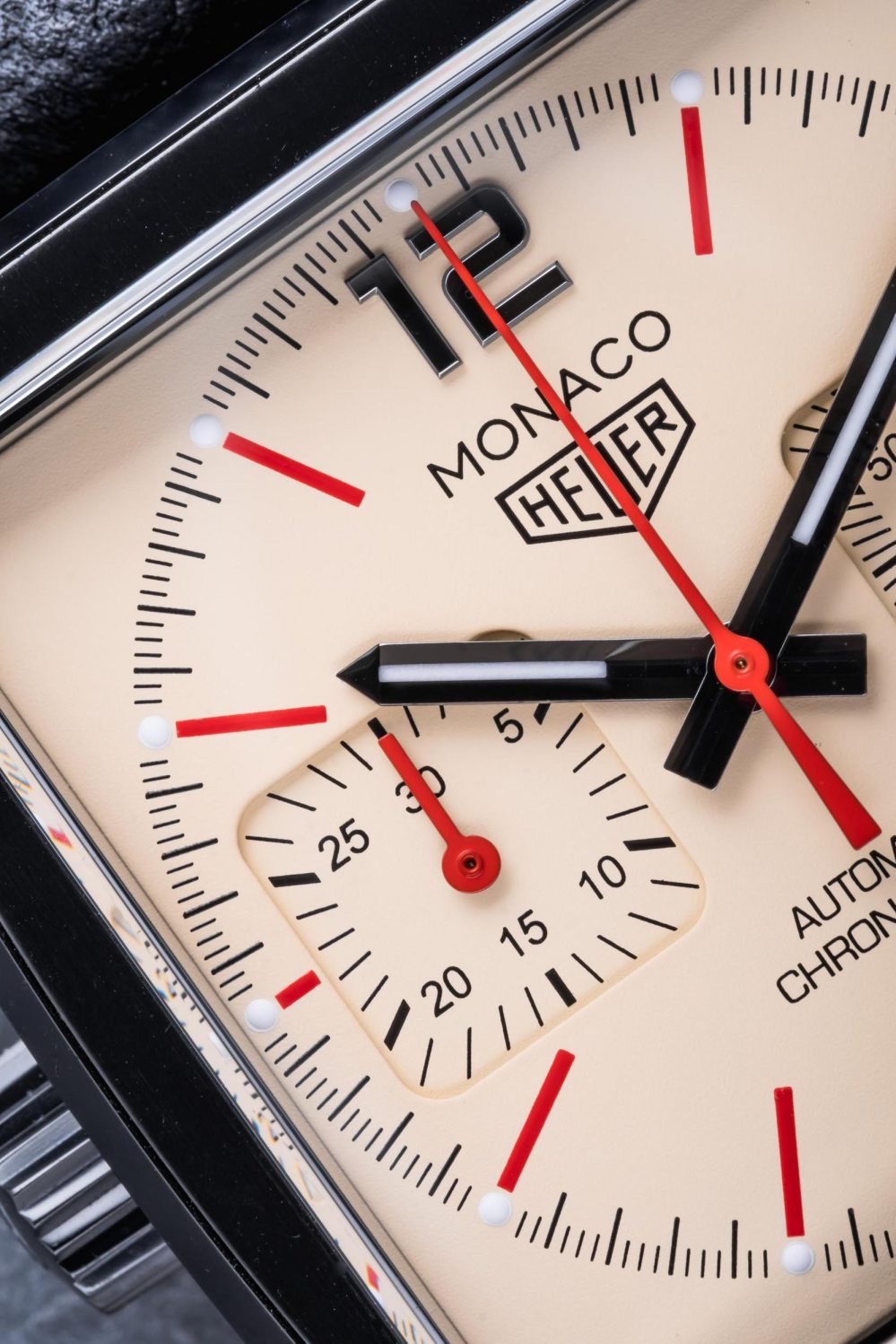 There is a real attention to detail in the design of the TAG Heuer x The Hour Glass Commemorative Watch ($5k) and the PVD case pays homage to the Heuer Monaco Ref. 740303N. Known amongst collectors as the ‘Dark Lord’, Ref. 740303N was released in very limited numbers back in 1974 and has become a mainstay of top 10 lists of horology aficionados the world over. This Heuer was released when they were still experimenting with the then-new process of physical vapour deposition and represents a landmark in the world of watchmaking. 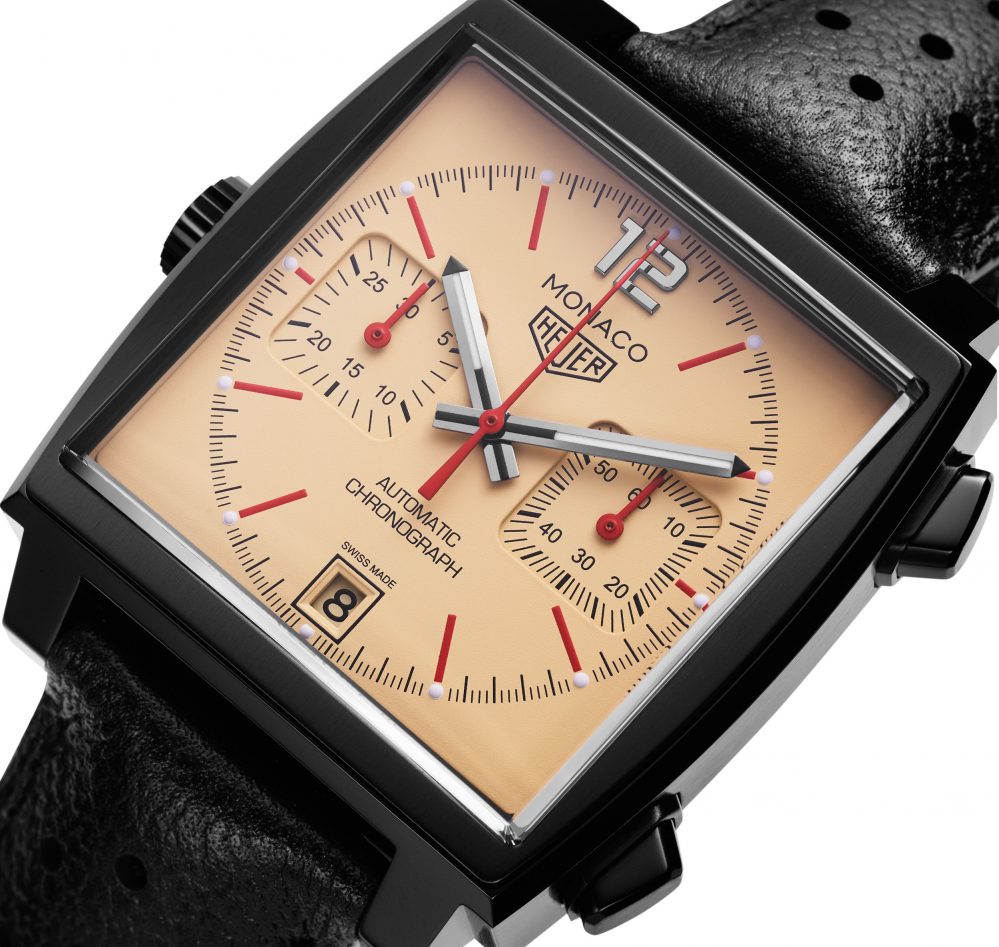 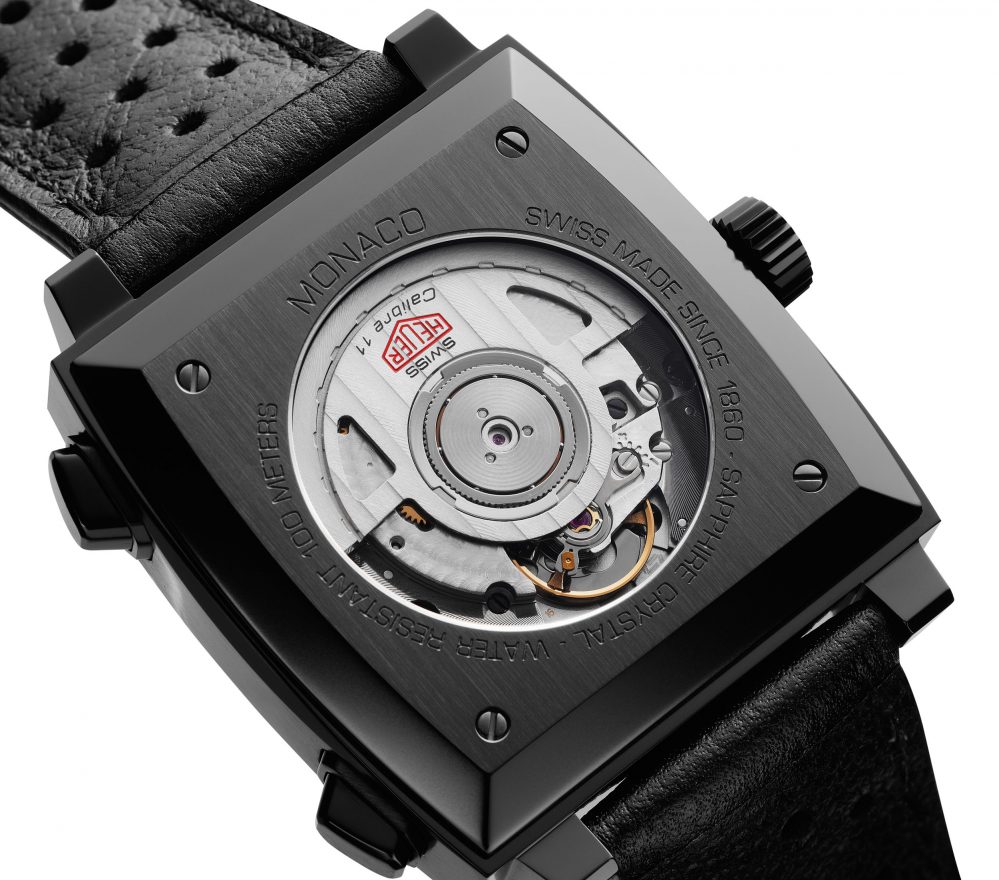 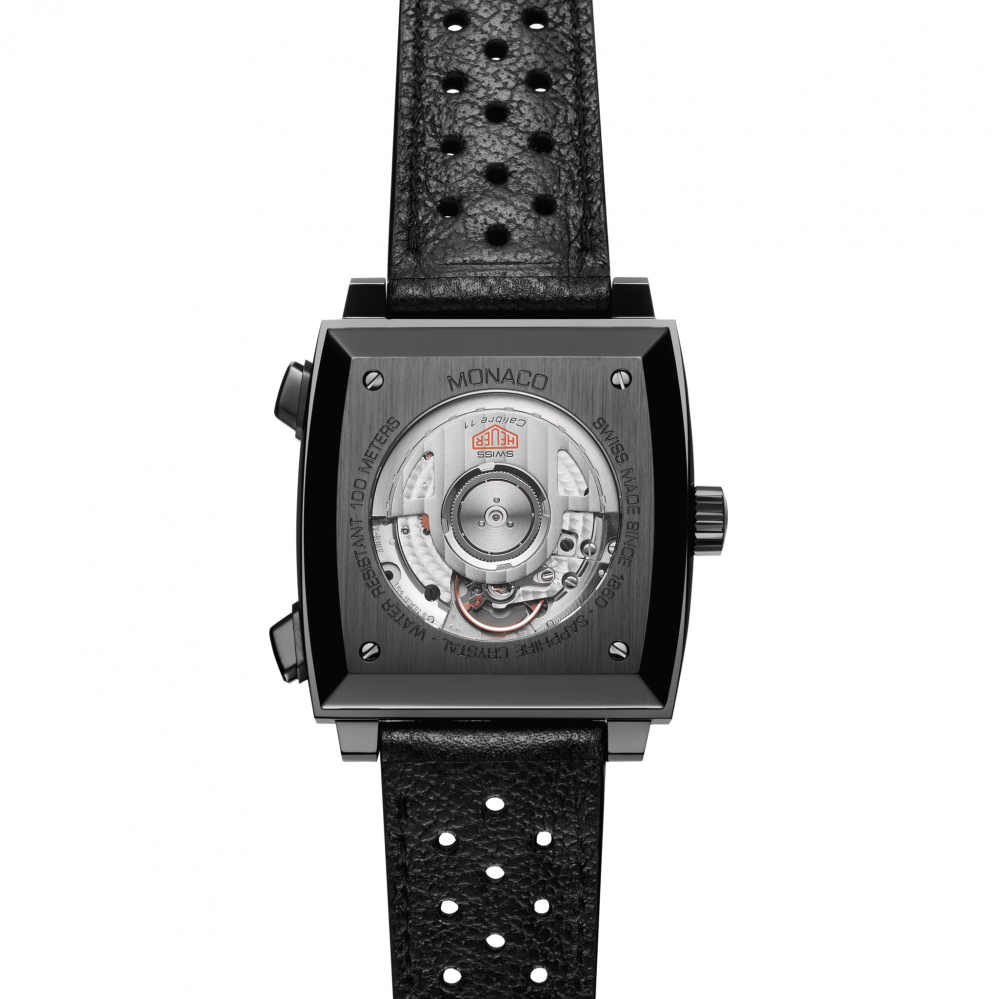 The TAG Heuer Commemorative Edition for The Hour Glass boasts a stealthy and stylish black PVD steel case (front and back), fixed bezel, left-hand signed crown and chronograph pushers (at 2 and 4 o’clock positions). The beige opalin dial can be viewed under a domed bevelled sapphire crystal glass front and is an eye-catching design to say the least. It reveals a bi-compax dial arrangement (2 counters): running seconds at the 3 o’clock position and minute chronograph counter at the 9 o’clock position. This watch is limited to a mere 50 pieces so if you’ve liked what you’ve seen, you’ll definitely have to move quickly in order to secure one for your wrist.

The Monaco is one of TAG Heuer’s most iconic series of watches and this one from The Hour Glass ramps up its old school cool even further. It has a red lacquered central hand, red indexes with SuperLuminova, a black minute track and an angular black-framed date window at 6 o’clock (with a matching beige opaline date-wheel).  A black vintage Heuer logo and the words “MONACO AUTOMATIC CHRONOGRAPH” also adorn the dial of the watch to add to the authenticity of the piece. 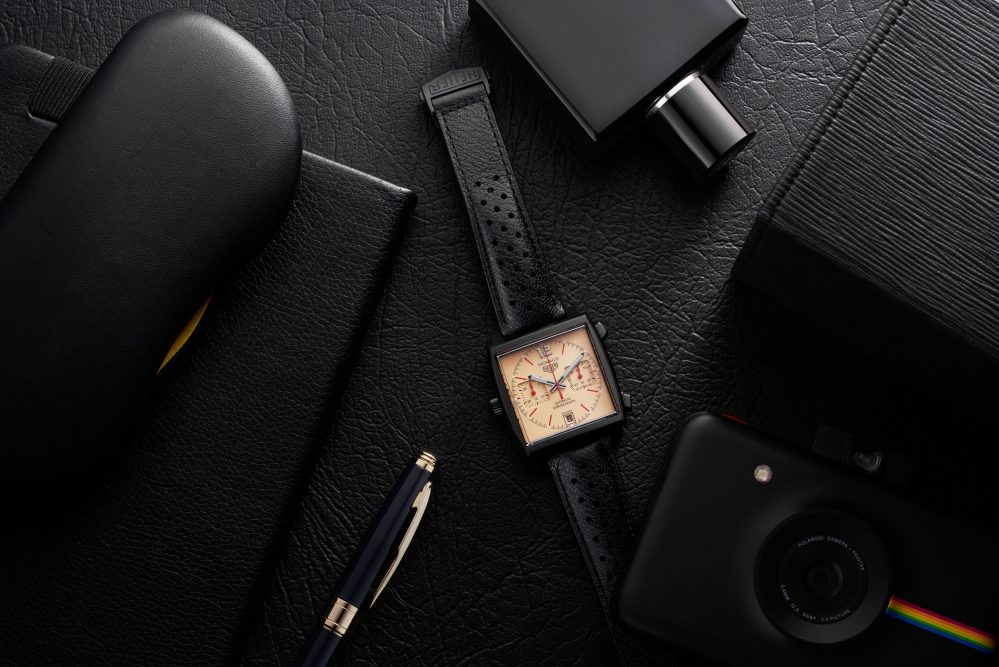 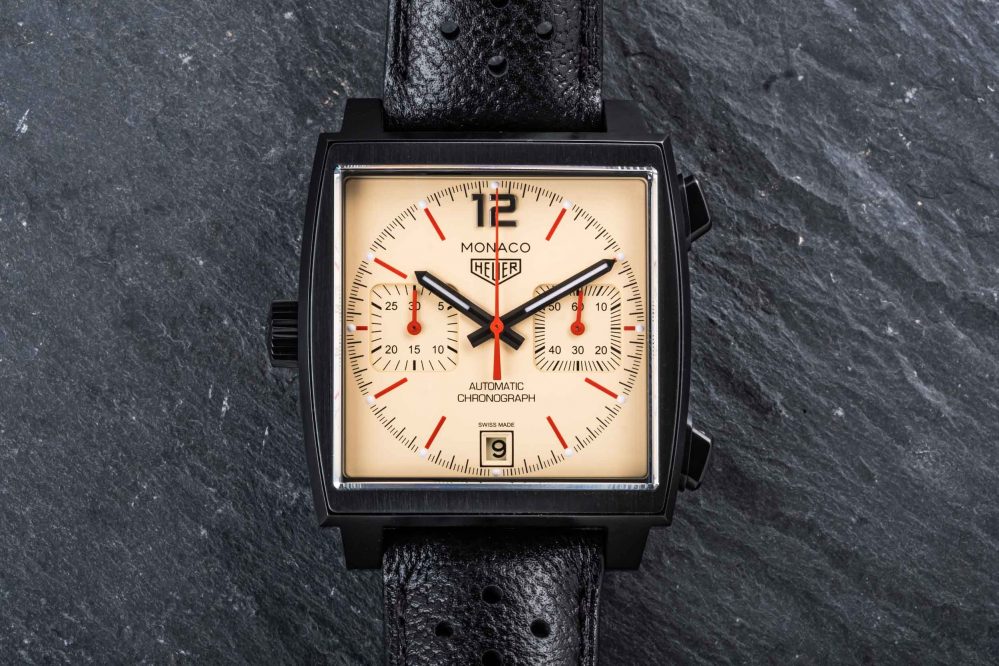 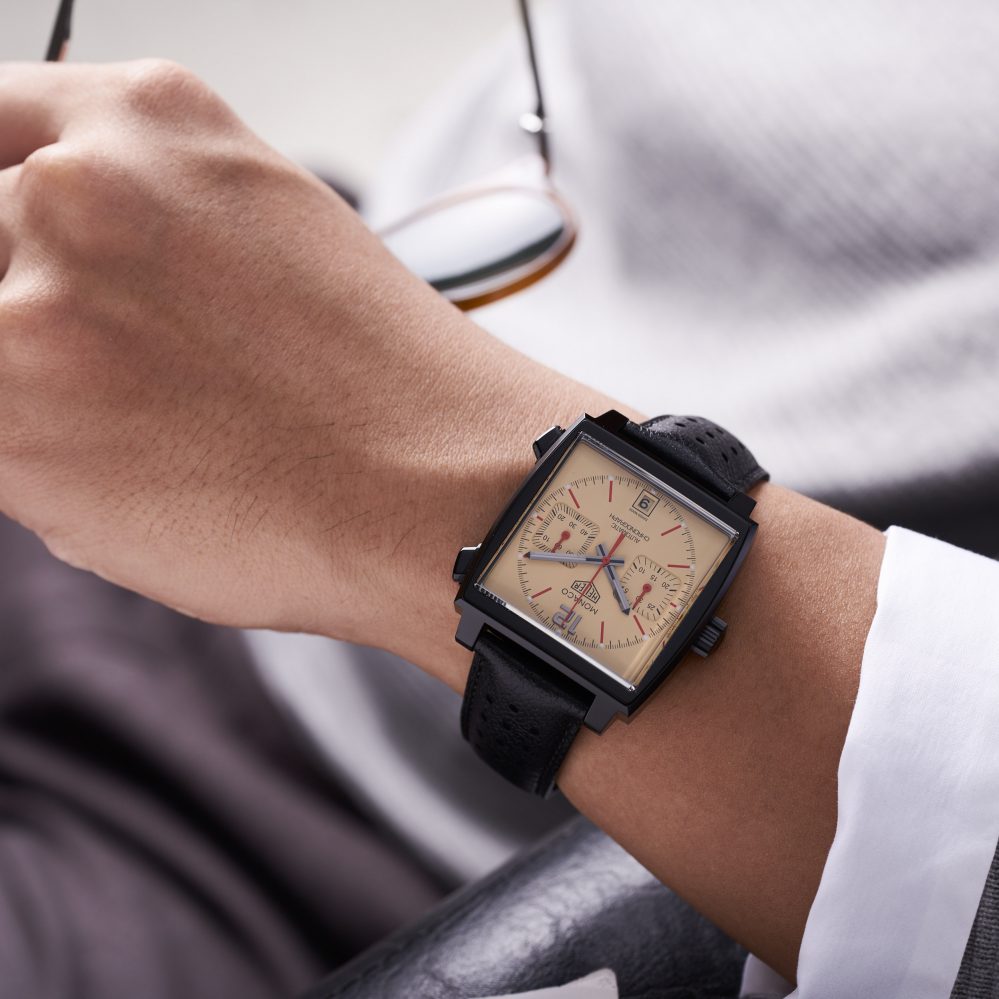 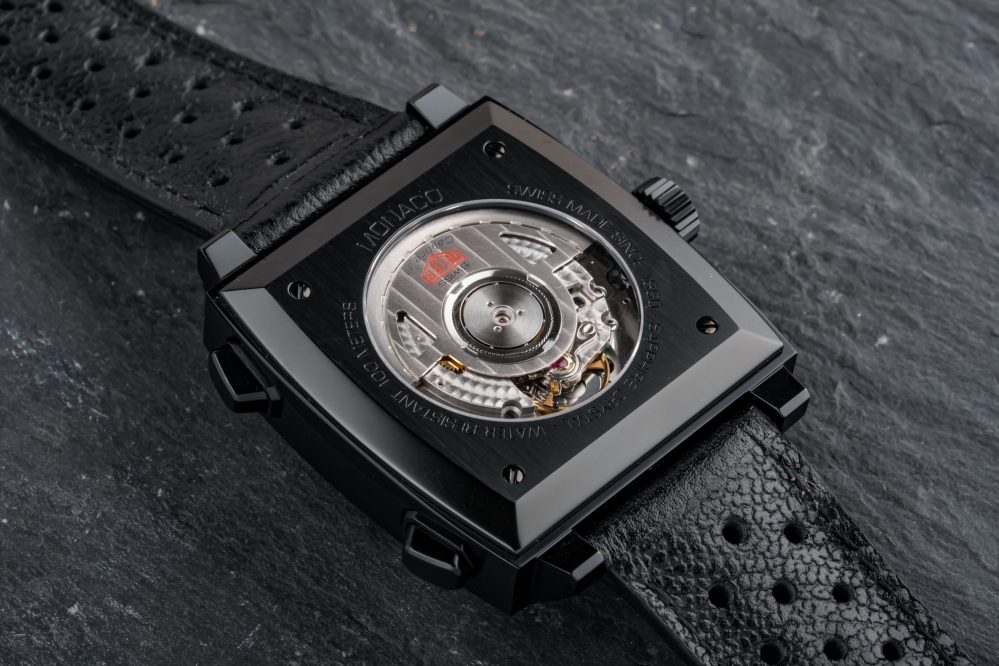 Upon turning the watch over you’ll find a black PVD case back with a self-winding Calibre 11 Automatic movement being visible under a sapphire crystal case back. The Swiss made movement ticks at 28,800 vibrations per hour (4 Hz), has a power-reserve of 40 hours and features stop-seconds and rapid date correction with an impressive water-resistant of some 100 metres. As there just 50 hitting the shelves, make sure you don’t miss out on this cracking limited edition offering from TAG Heuer.