For anyone with a love of vintage style motorbikes coupled with some of the classiest design you’re likely to encounter, this awesome looking Angry Lane Triump T140 Motorbike is certainly for you. Striking in the extreme and positively chock full of cracking features and materials, this is undoubtedly one of the best looking steeds we’ve seen in a while here at Coolector HQ and we’re blown away by its performance and aesthetic impact. 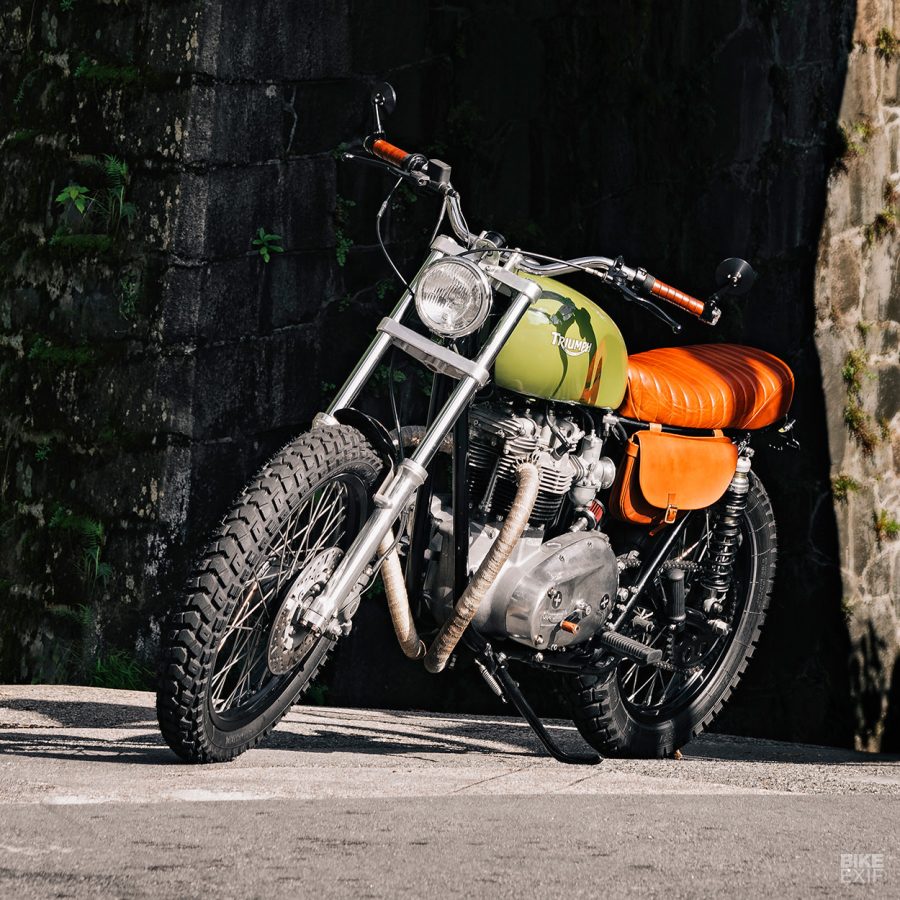 The Triumph T140 Motorbike from Hong Kong based, Angry Lane, which is run by run by Guillaume Barras, who is also responsible for organising of the region’s Distinguished Gentleman’s Ride, so he clearly knows a thing or two about vintage, dapper looking machines. This stunning steed hasn’t undergone a radical transformation, instead focusing on suitable touches that significantly enhance the overall look and feel of the machine.

With the remit of designing something “Paul Newman” would ride, Angry Lane set about restoring this vintage British Triumph motorbike and, as you can see, they have done a superb job in breathing new life into an old machine. Built upon a 1977 Triumph Bonneville T140 RV, this was an export version of the five-speed ‘V,’ with engine modifications to suit the American market. The gear lever was switched to the left-hand side to comply with regulations and there are plenty of other little design flourishes that catch the eye. 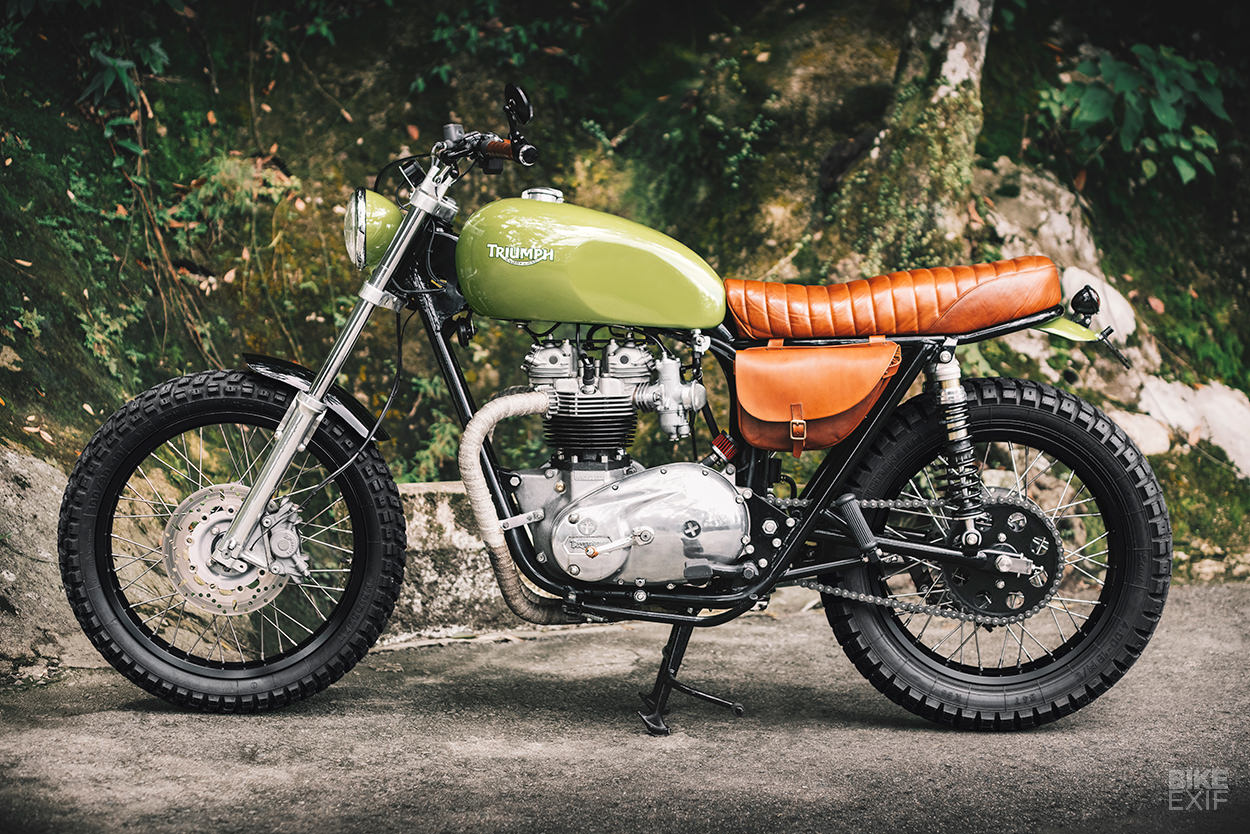 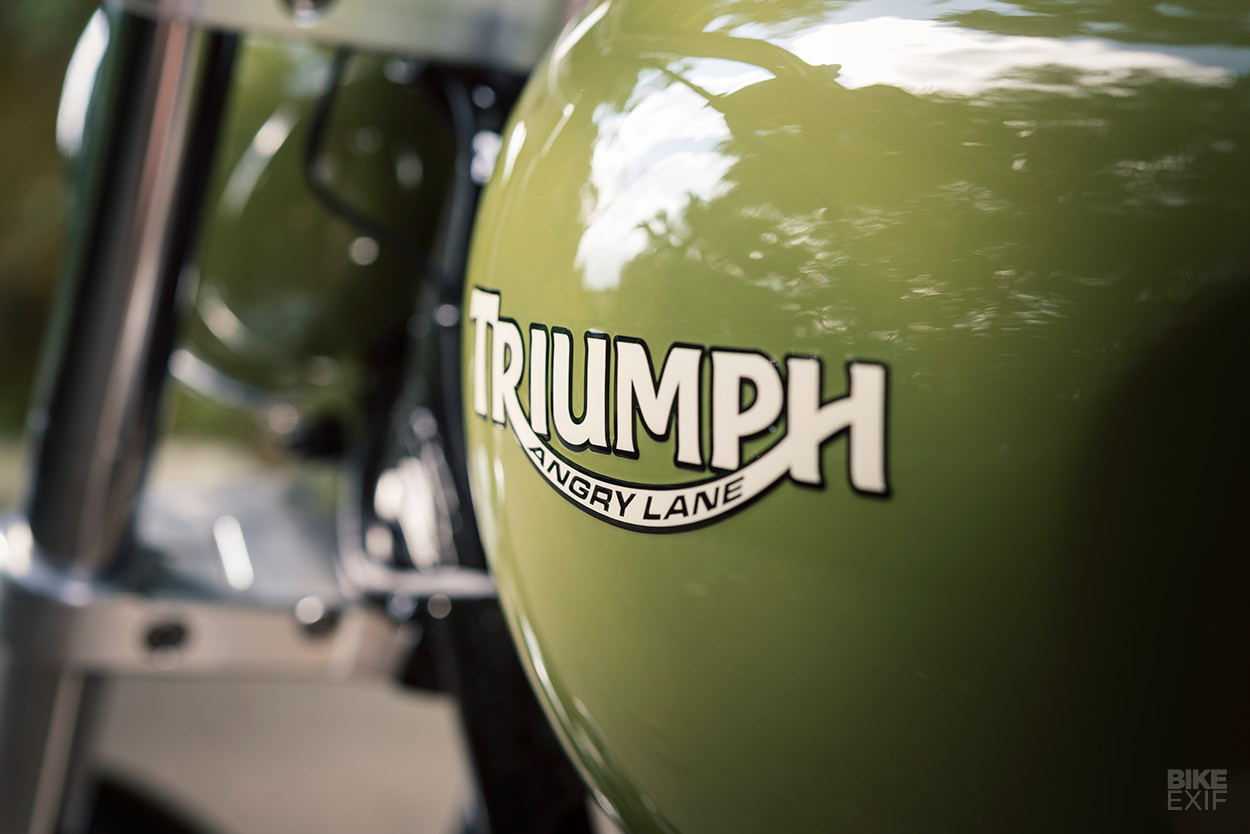 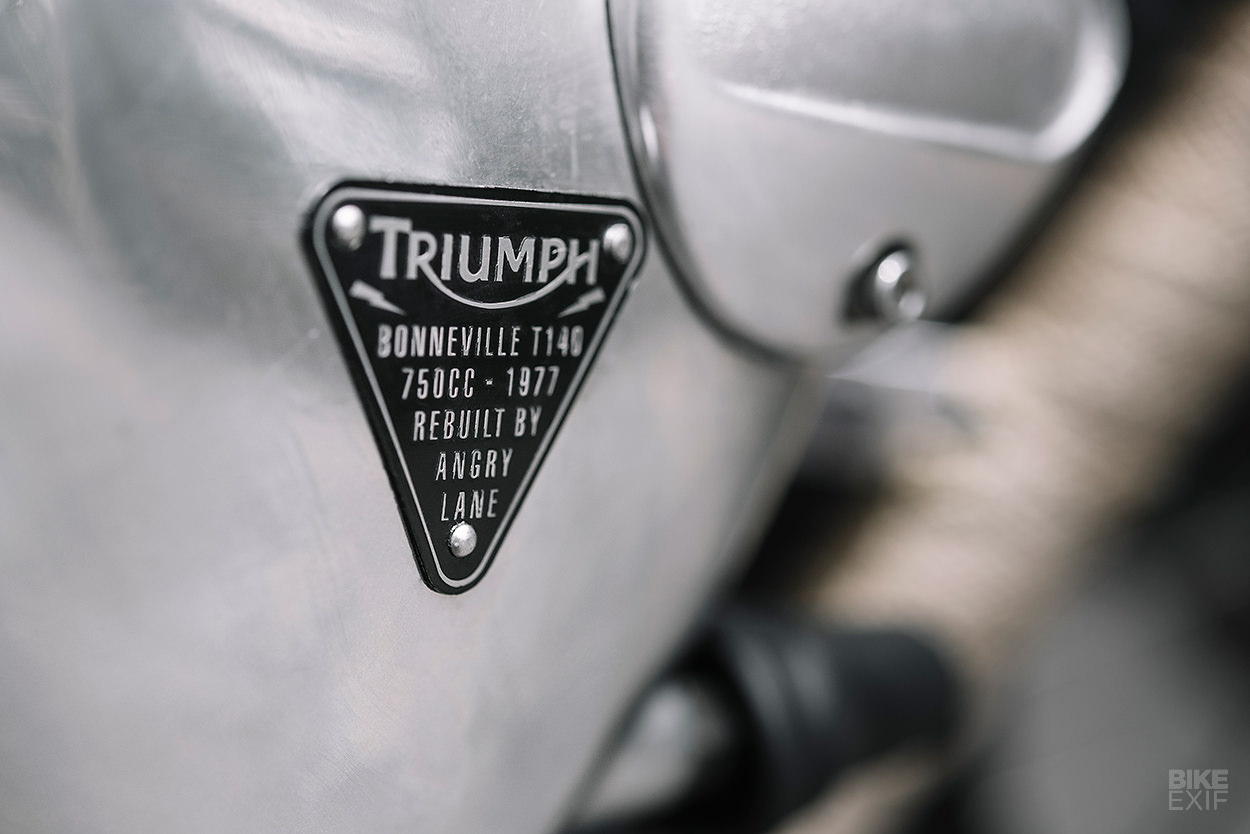 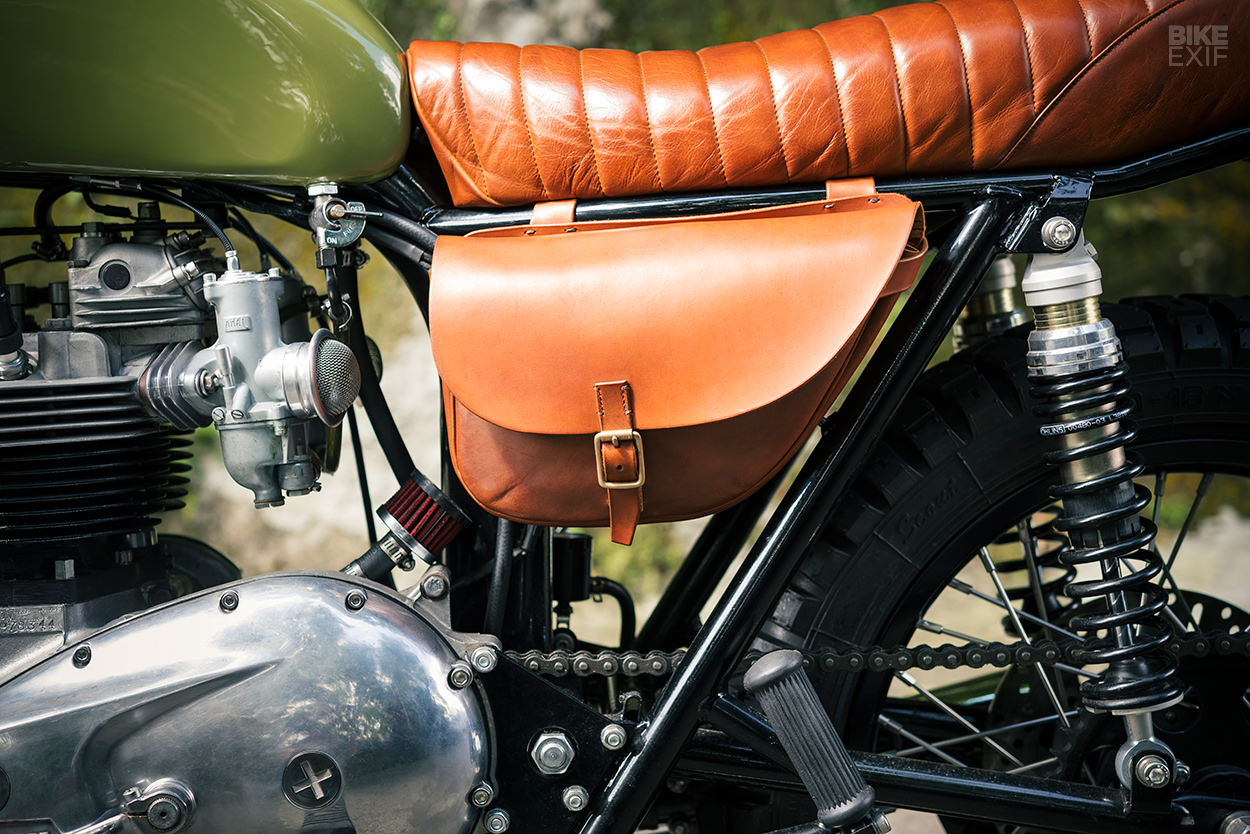 The Triumph T140 RV Motorbike from Angry Lane in Hong Kong has had an awful lot of work done in order to deliver the breathtaking finished product you see before you. The engine was stripped for a total rebuild with brand new cylinders and pistons, alongside new valve gear – all of which have combined to produce a ride that doesn’t just look great but also handles like a dream as well. It also boasts a custom 2-into-1 exhaust which has been hand crafted by New Zealand native, Paul Bryant, and the carbs have been enhanced to new Amal MKI Premier 932s, with velocity stacks. 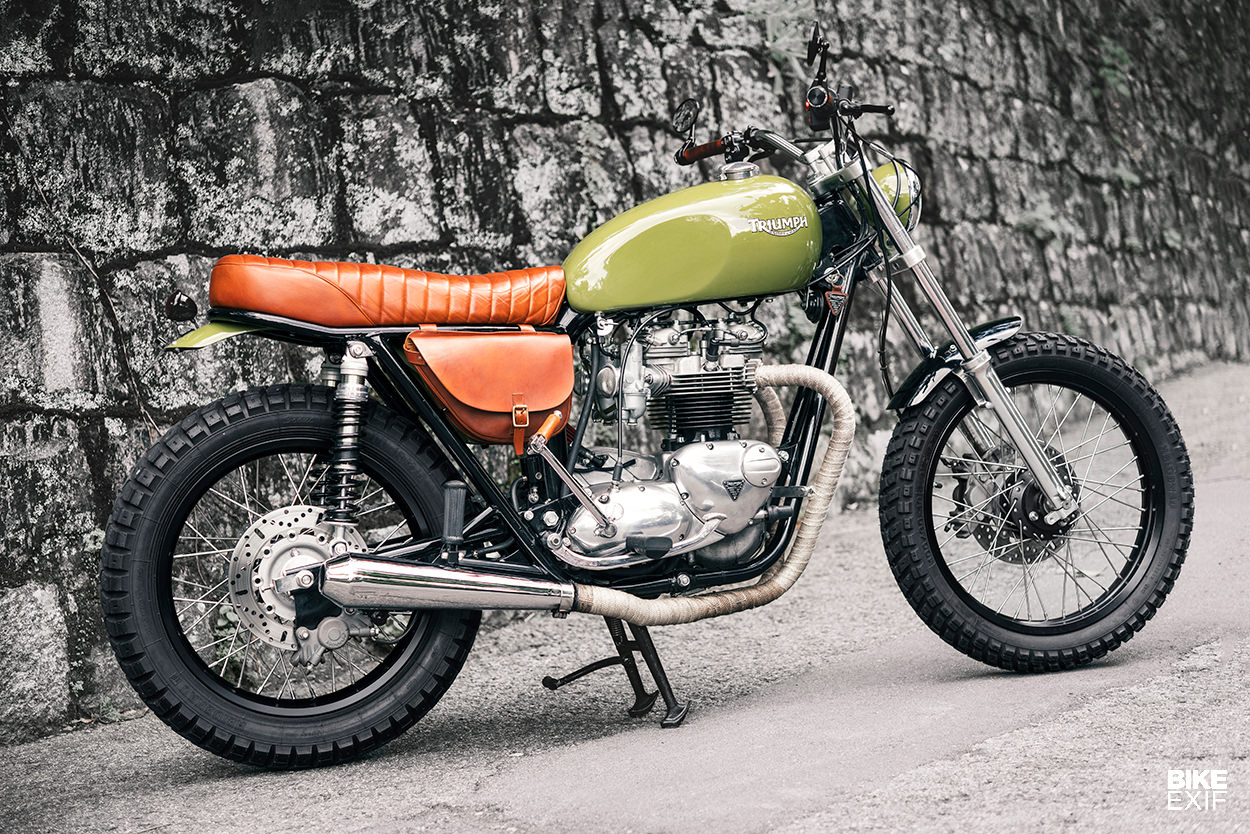 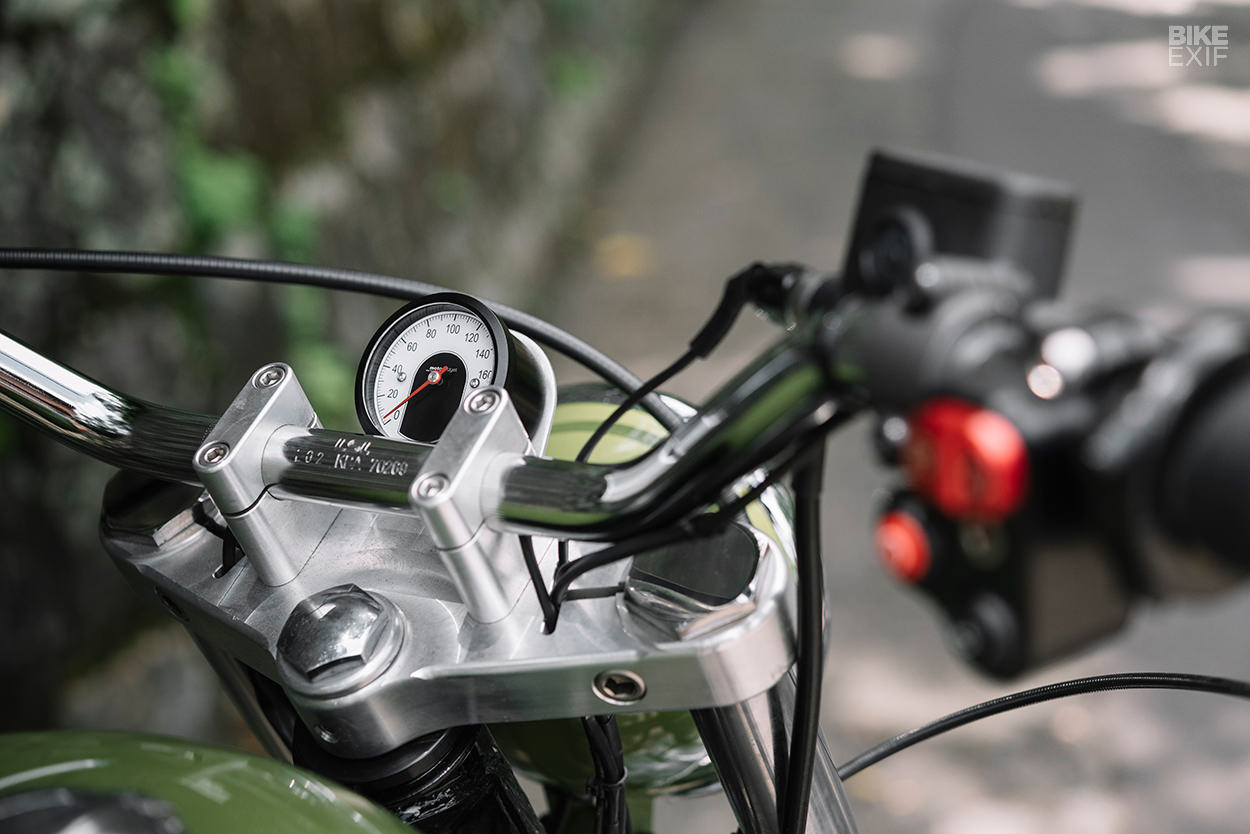 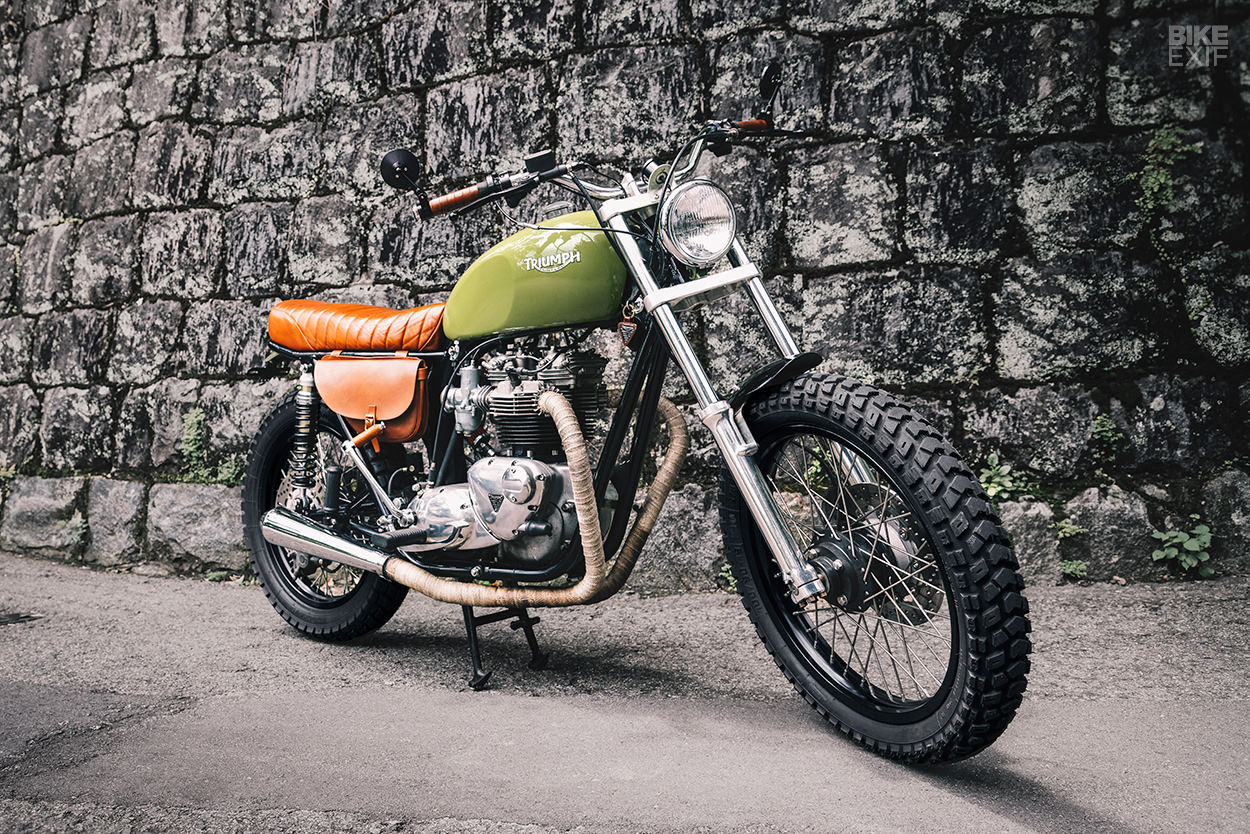 It is the engine that has undergone perhaps the most tangible improvements but Angry Lane have also installed a new (and lighter) brake system. This is joined by alloy two-piston calipers from AP Racing which bite down on floating discs from EBC, and the lines have been replaced by custom hoses from HEL. The wheels of this glorious ride are low-key: black anodised aluminium Sun Rims, with spokes from Buchanans.

The electrics on the Angry Lane Triumph 140 are a mix of old and new and this includes a modern Antigravity lithium battery which provides the power, and there’s also an electronic ignition from the New Zealand company Pazon which ensures an efficient start every time. Last but not least, there is a new high output 12V 3-phase stator-rotor and regulator rectifier which makes sure it sounds great out on the road. 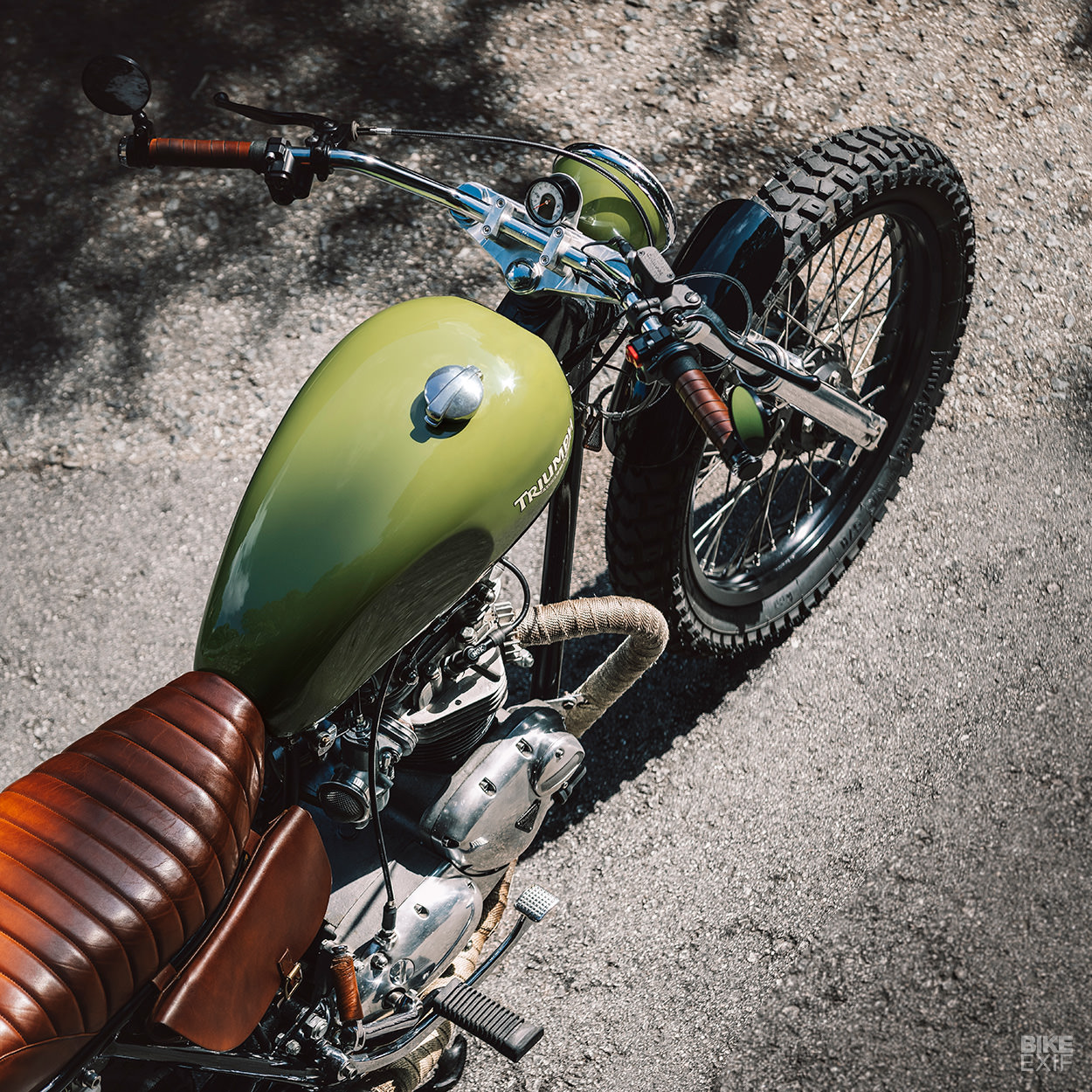 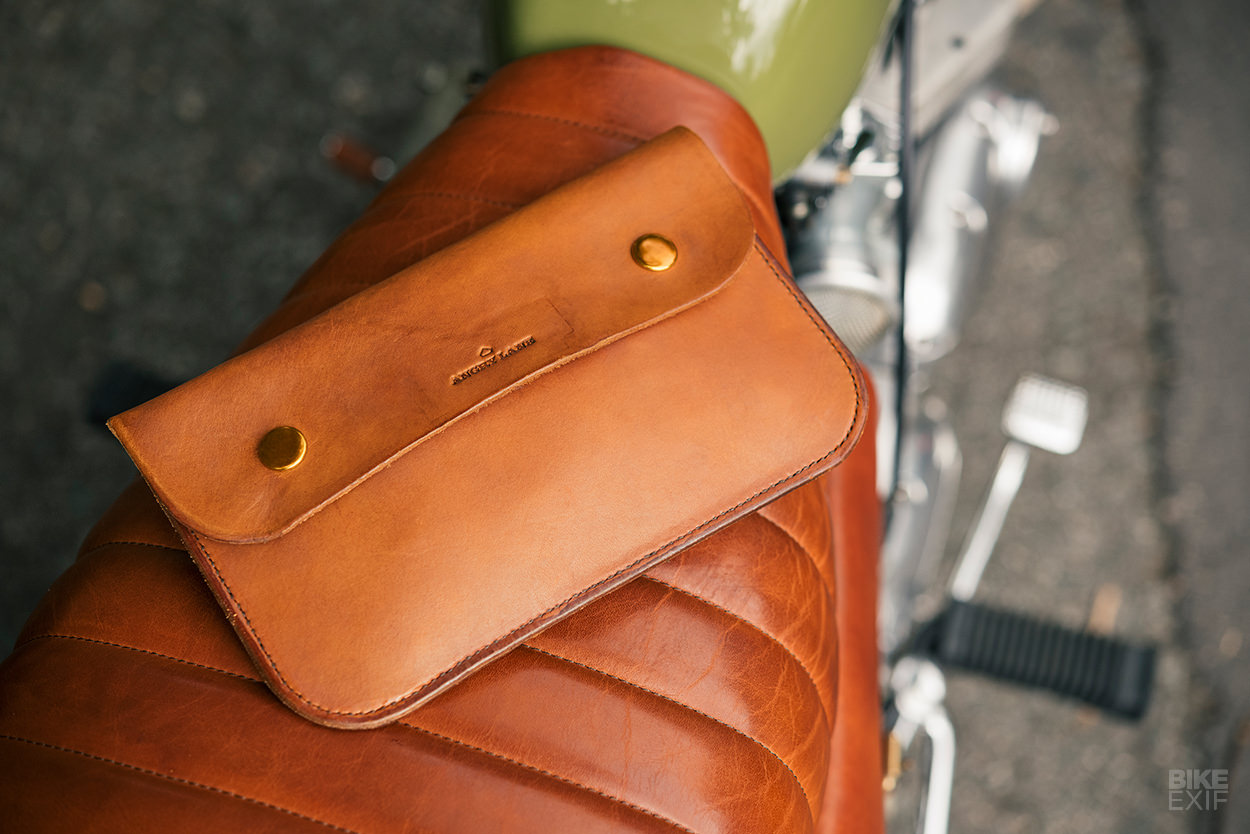 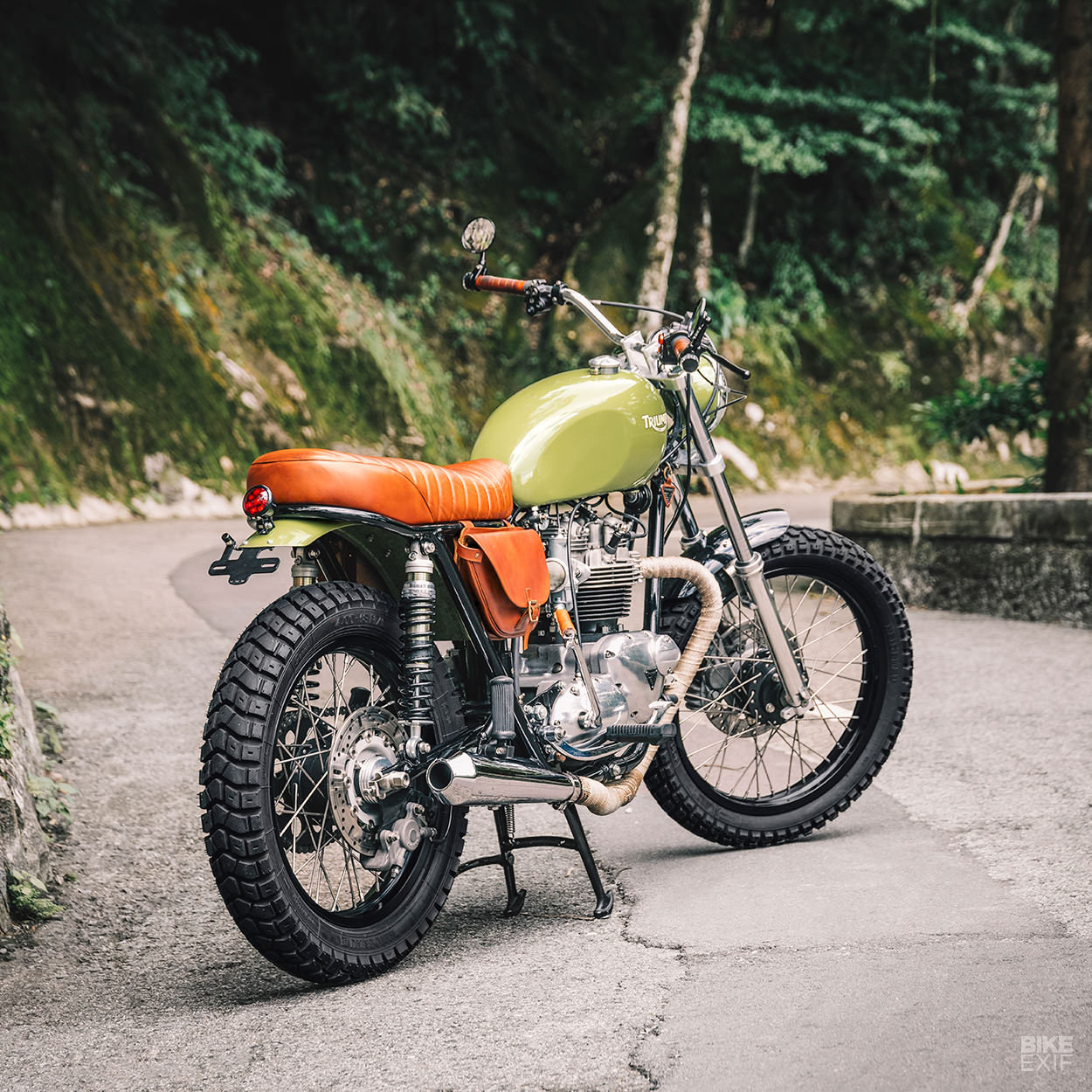 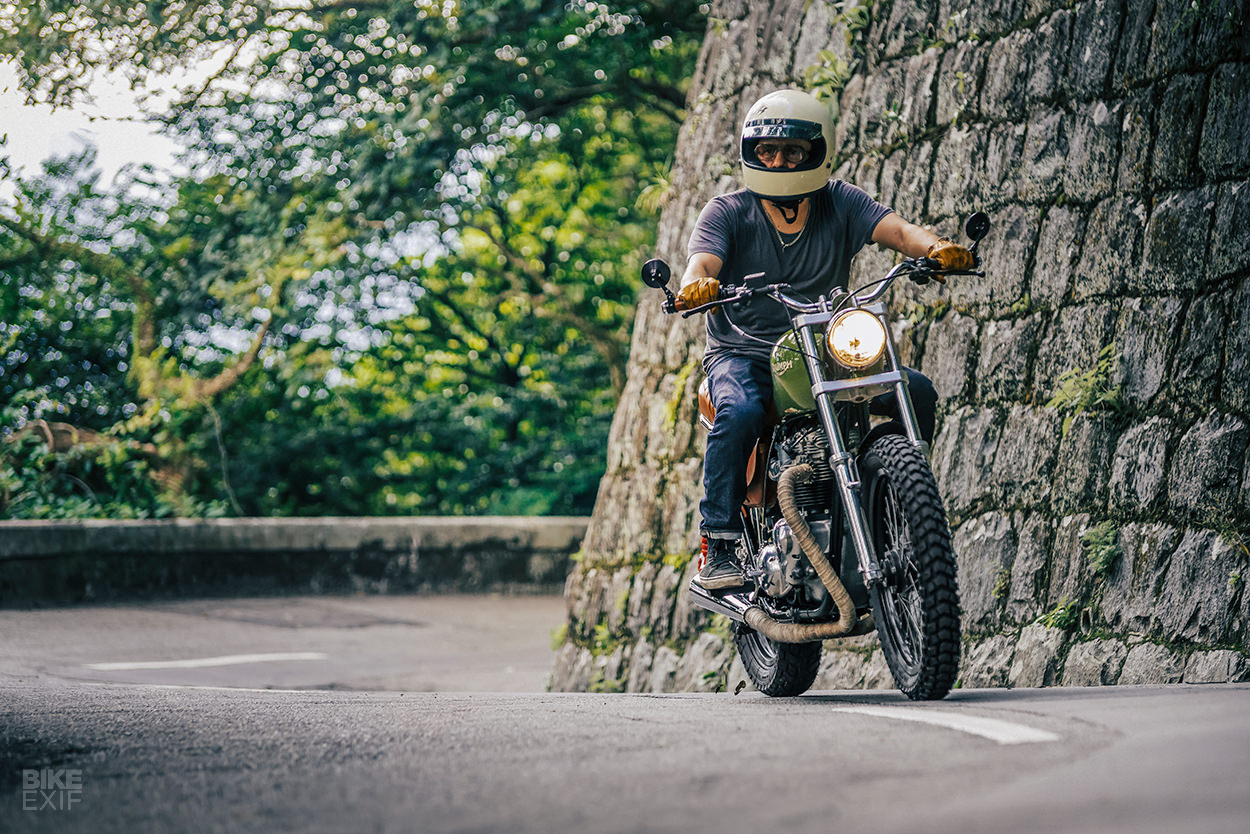 For anyone with a love of vintage British motorbikes, without the inventible troubles that go hand in hand with them, this contemporary renovation project from Angry Lane will be right up your street. Unparalleled from a visual point of view and a vast array of brand new additions, this mesmerising steed has been brought well and truly into the 21st century.