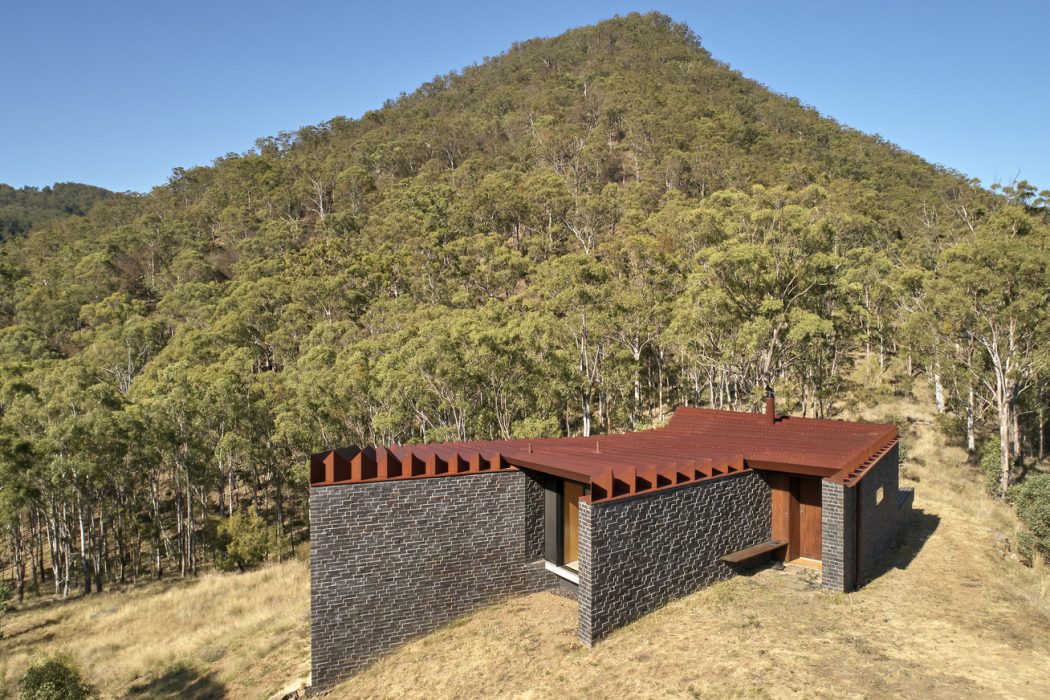 Remote living might not something that appeals to everyone but it’s certainly to our liking here at Coolector HQ and when we see stunning pieces of architecture like the Bellbird Retreat House in the wilds of Australia, it ramps up the sentiment still further. Designed by Steendijk Architects, the Bellbird Retreat House was completed last year and has a relatively compact 62m² of living space but it has been so cleverly used that it feels much more spacious than it perhaps looks. 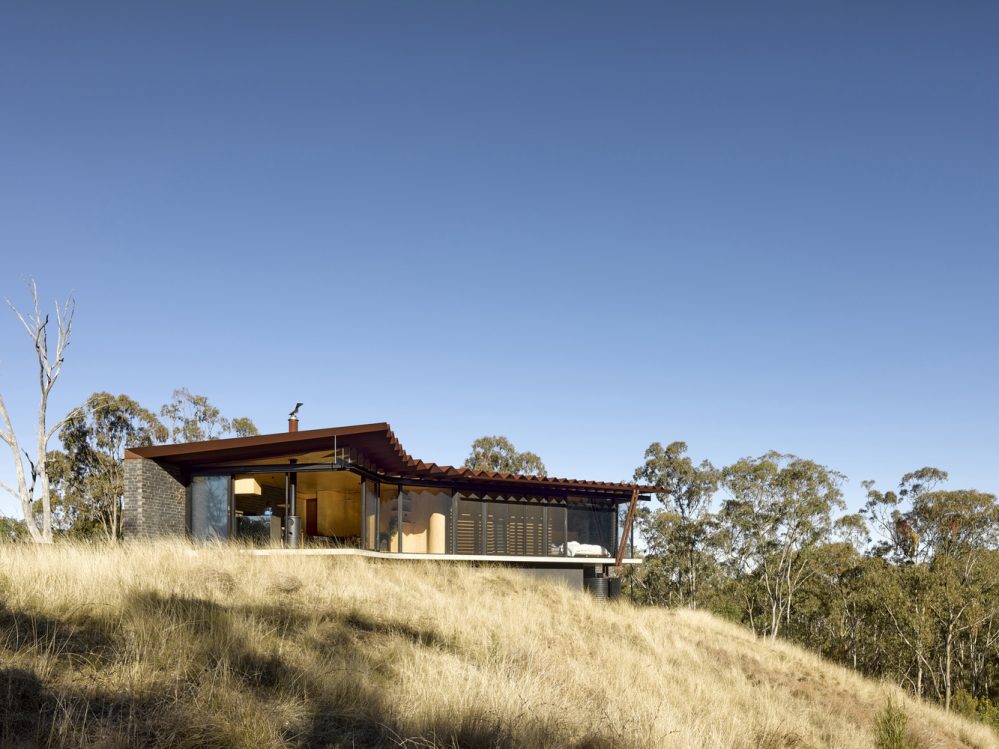 The Bellbird Retreat House from Steendijk Architects can be found in Killarney in Australia and it has been designed as a weekend escape to a breathtaking rural setting.  The understated and contemporary dwelling sits in a pristine bushland reserve and encourages a dialogue between man-made and natural environments. Connection to place is embraced through building form and the materials chosen, climatic sensitivity, and the framing of glorious views that surround the property.

Serenity and relaxation are the call of the day with the Bellbird Retreat House and its design has been carefully considered to make the most of its unique and welcoming location in the Australian bushland. Tempering the remote rural land upon which it sits, the Bellbird Retreat House affords its occupants comfort and safe haven and a relaxing retreat away from the hustle and bustle of the daily grind and city living. 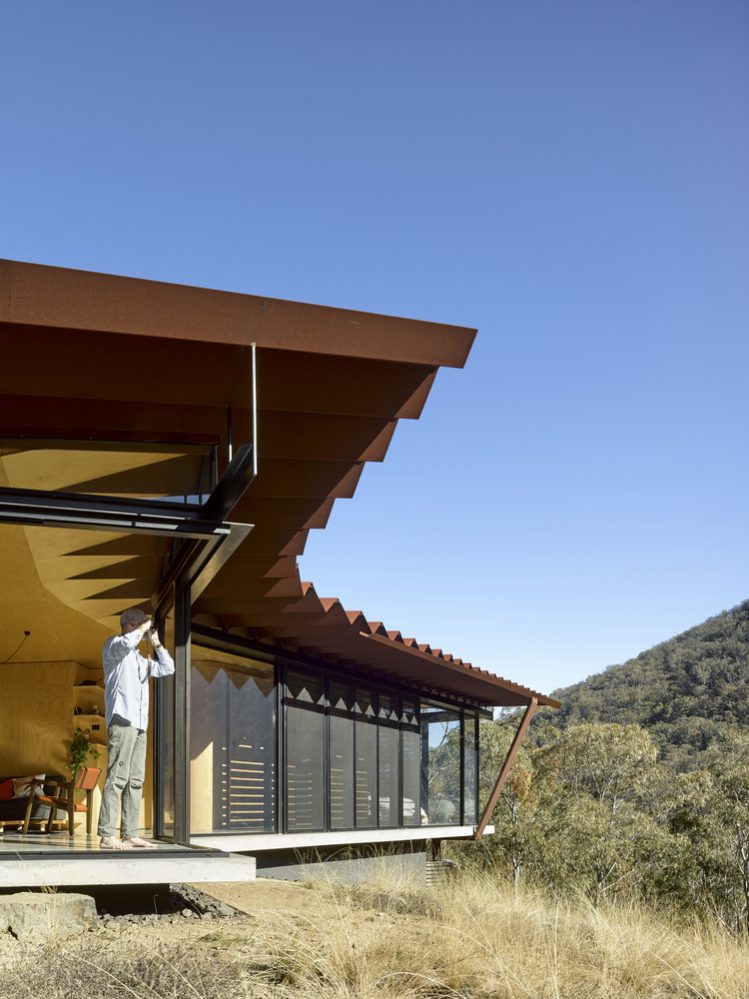 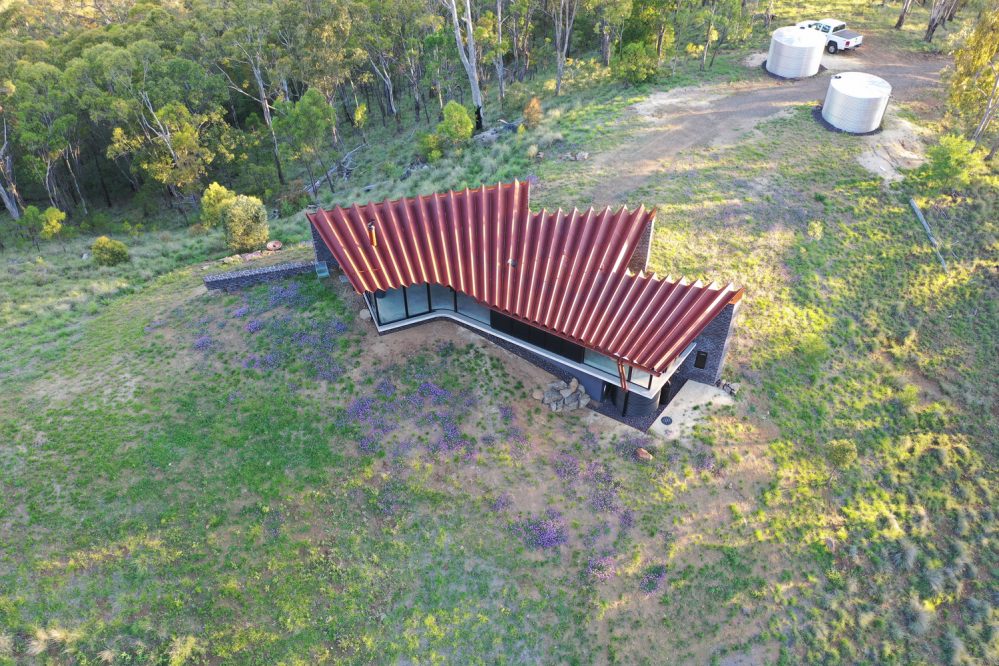 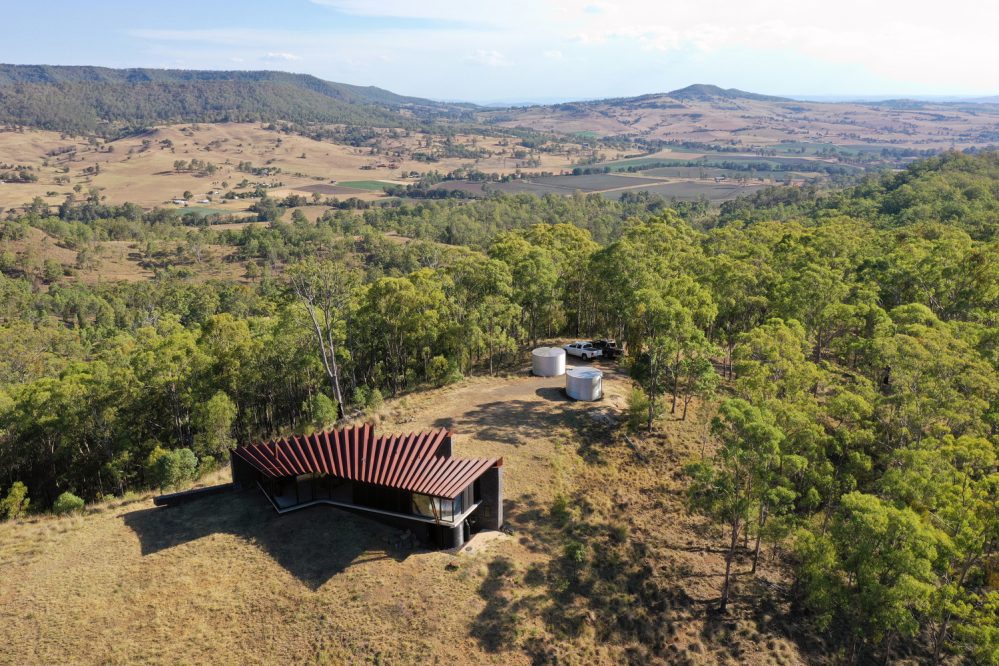 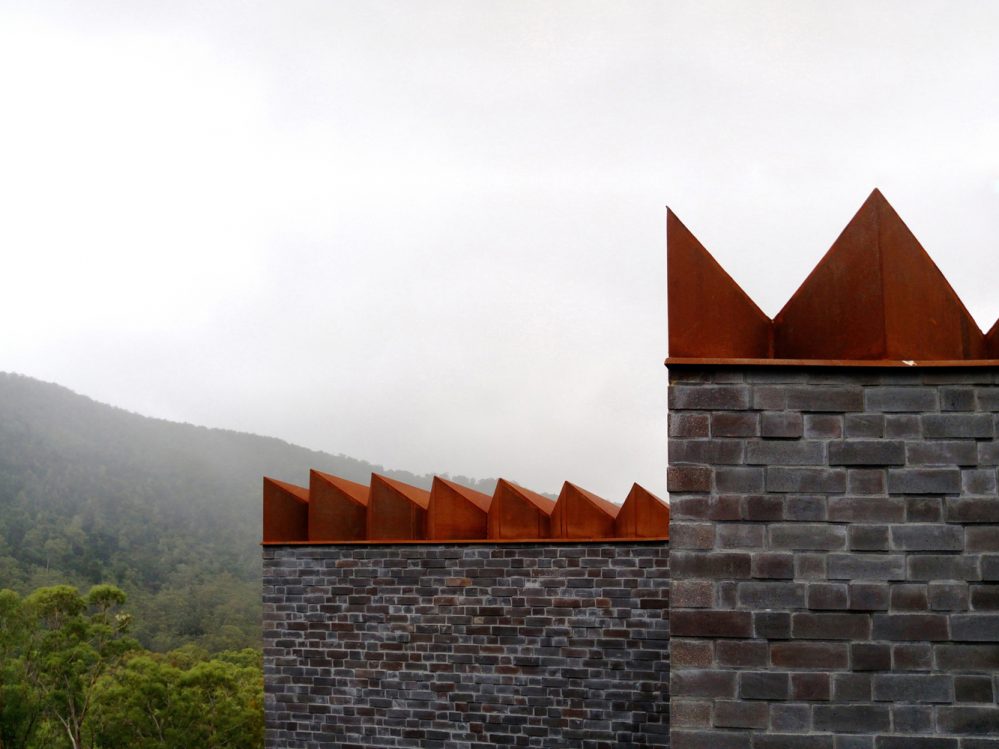 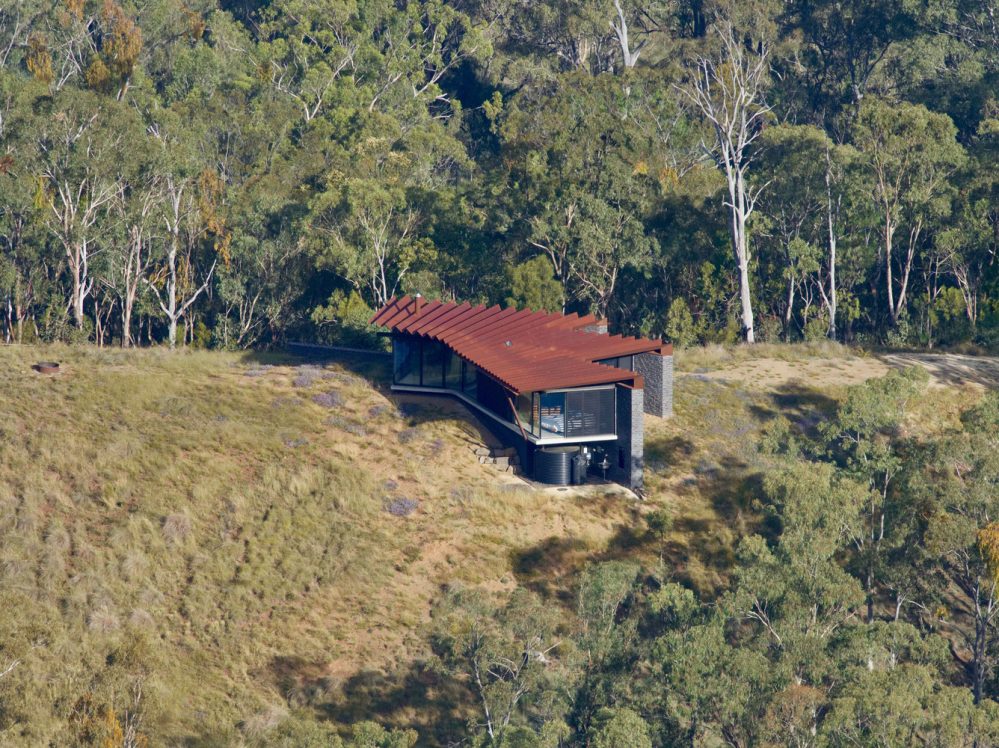 The Bellbird Retreat House from Steendijk Architects puts a lot of emphasis on sustainability and boasts plenty of design features that make this weekend retreat as environmentally friendly as possible. From rainwater and electricity harvesting to passive design measures which use the building’s mass and orientation to deliver year-round thermal comfort, it’s clear this is a house with an eco-conscience. With a site susceptible to devastating bushfires, the inspired fire-resistant roof design eliminated combustible timber rafters by utilising the structural capacity of steel pleats to create a single span structure with unsupported cantilevered eaves. 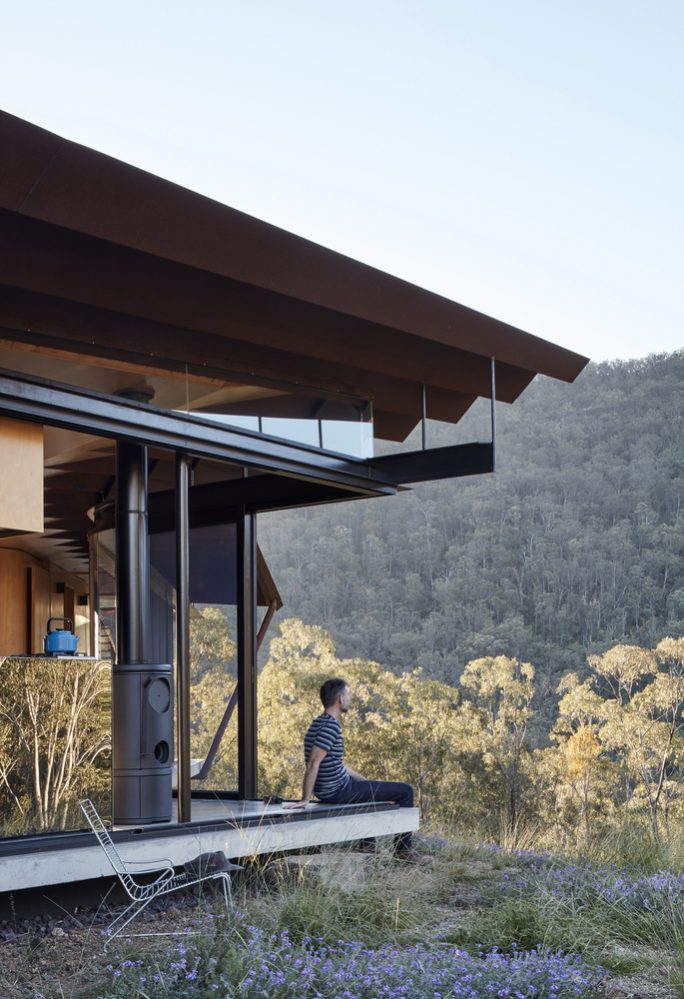 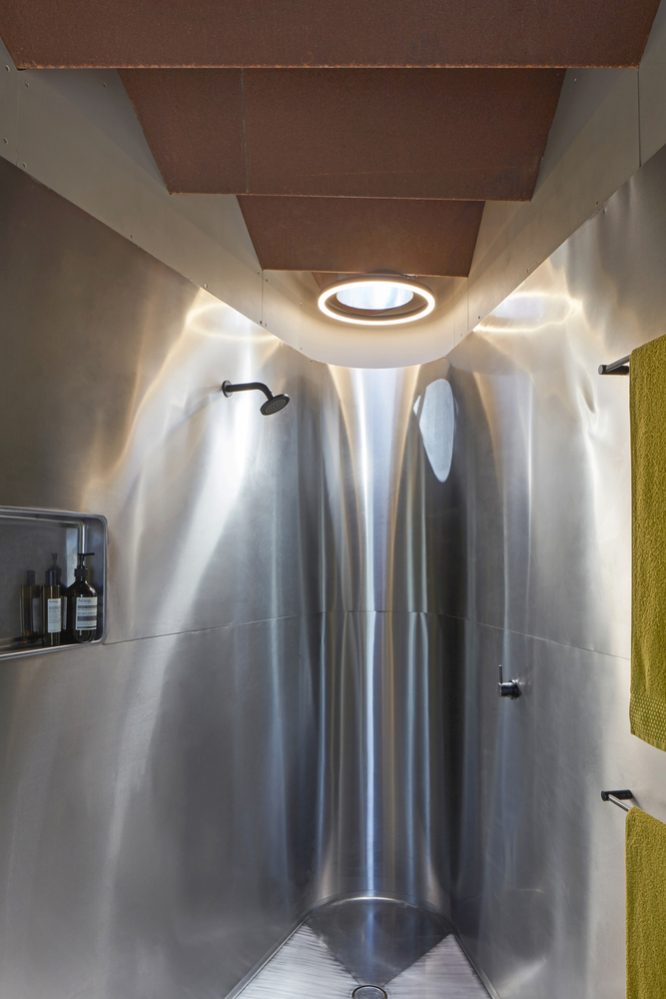 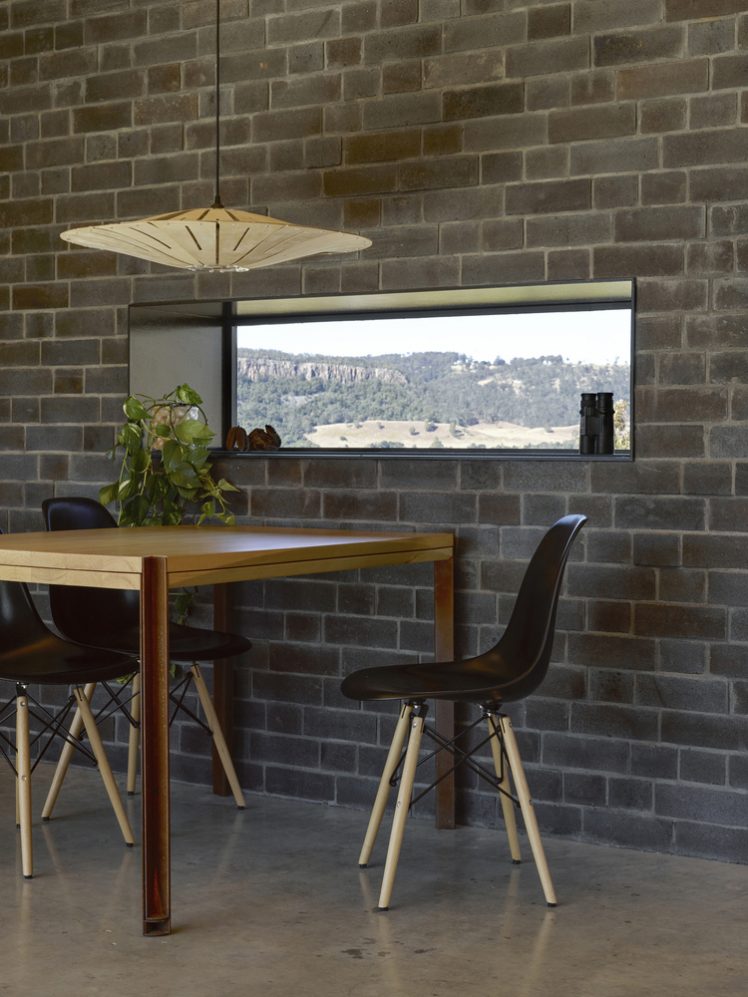 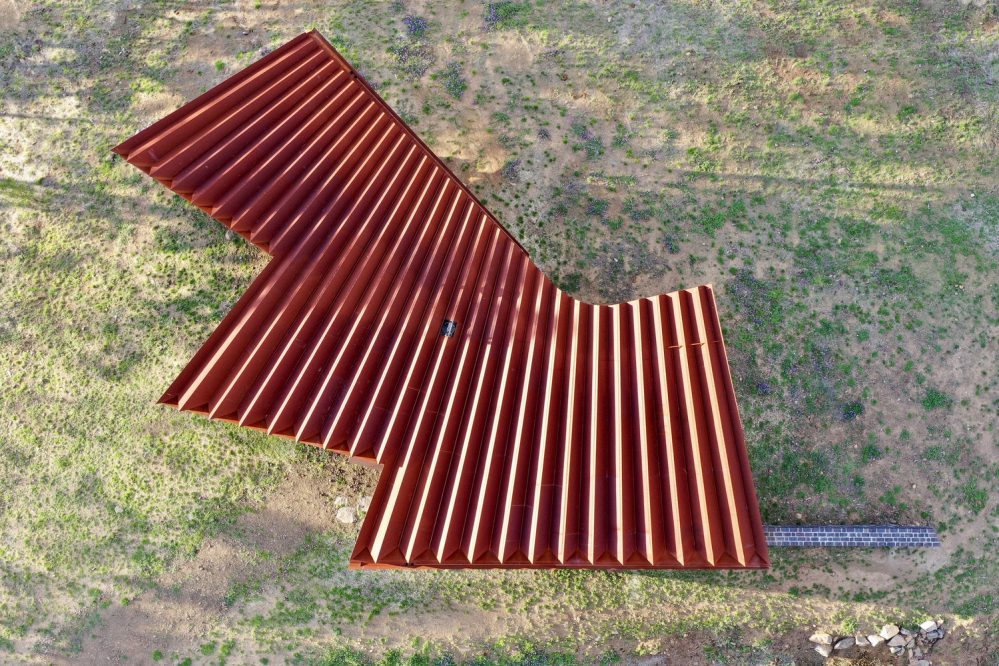 As you walk up to the Bellbird Retreat House you’ll notice it has an almost fortress like aesthetic and this was a conscious decision on the part of the architects. It has a pleated steel roof with three pivoting brick blades that tie the dwelling inextricably to the site and provide shelter from the wind, sun, and fire. Positioned to maximise the mountain saddle for recreational use, enticing the occupant through sliding corner doors that peel back. The concrete floor slab cantilevers to provide an impromptu seat and discourages wildlife accessing interior spaces.

This weekend retreat gives the owners the opportunity to relax and unwind in some of Australia’s most mesmerising bushland and it has been so cleverly designed so as not to detract from its unique, wilderness setting. It boasts monolithic brick blade walls which are continued inside, and triangular roof pleats which penetrate the northern glass facade, with their patina resonating with the bark of surrounding gum trees. 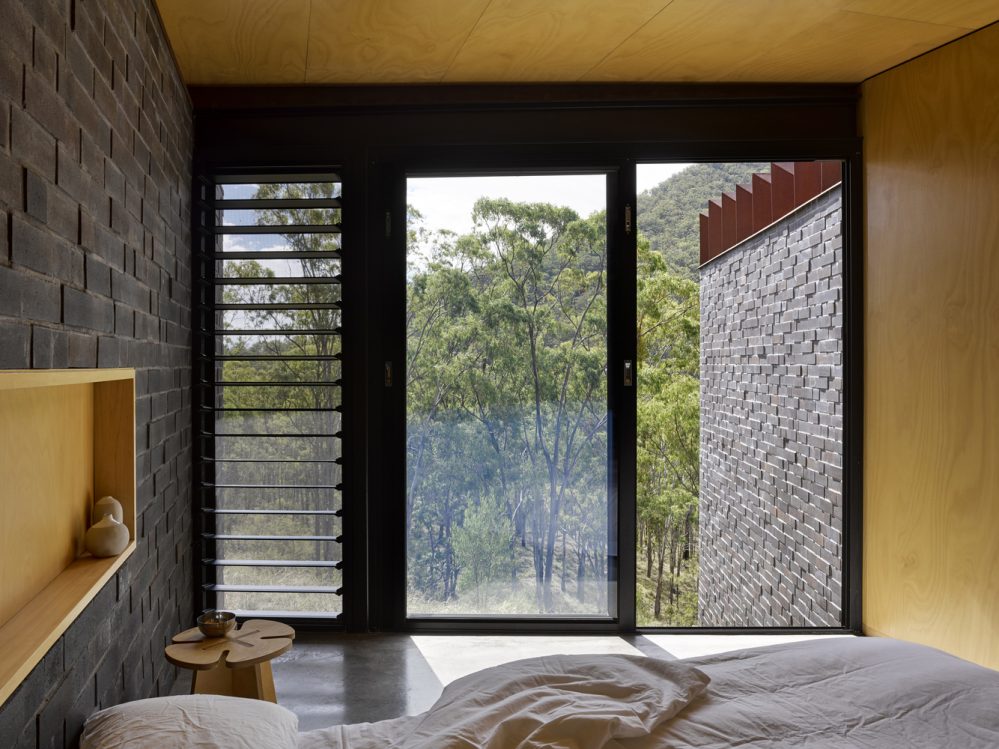 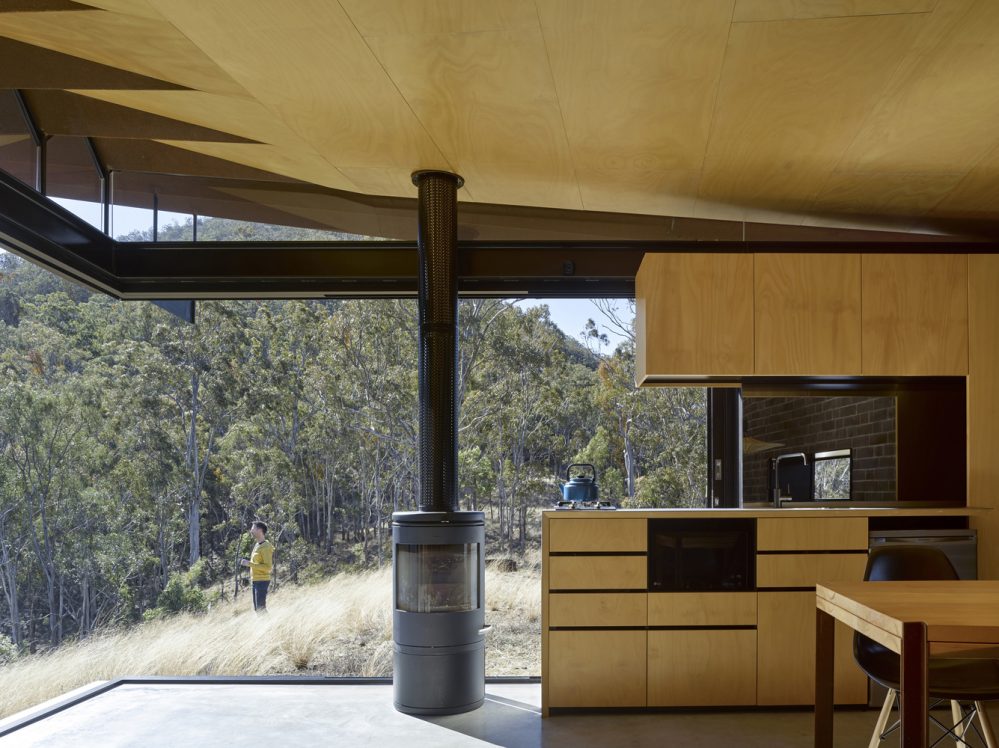 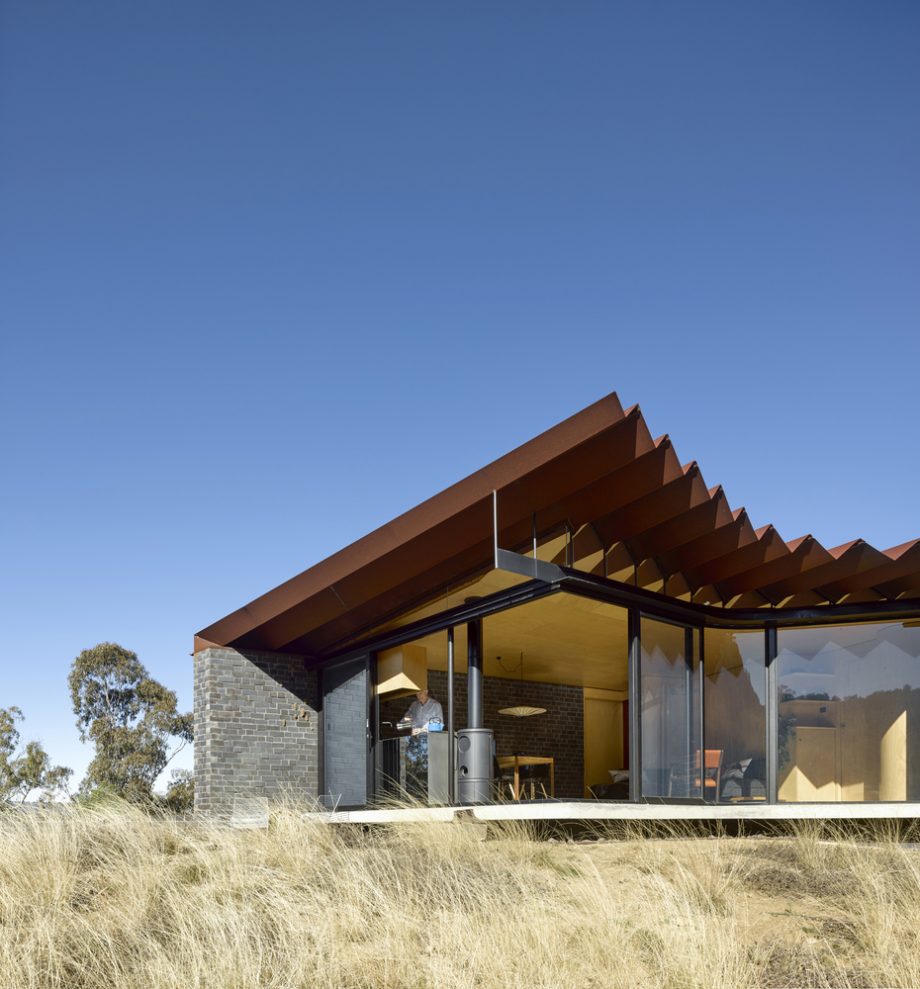 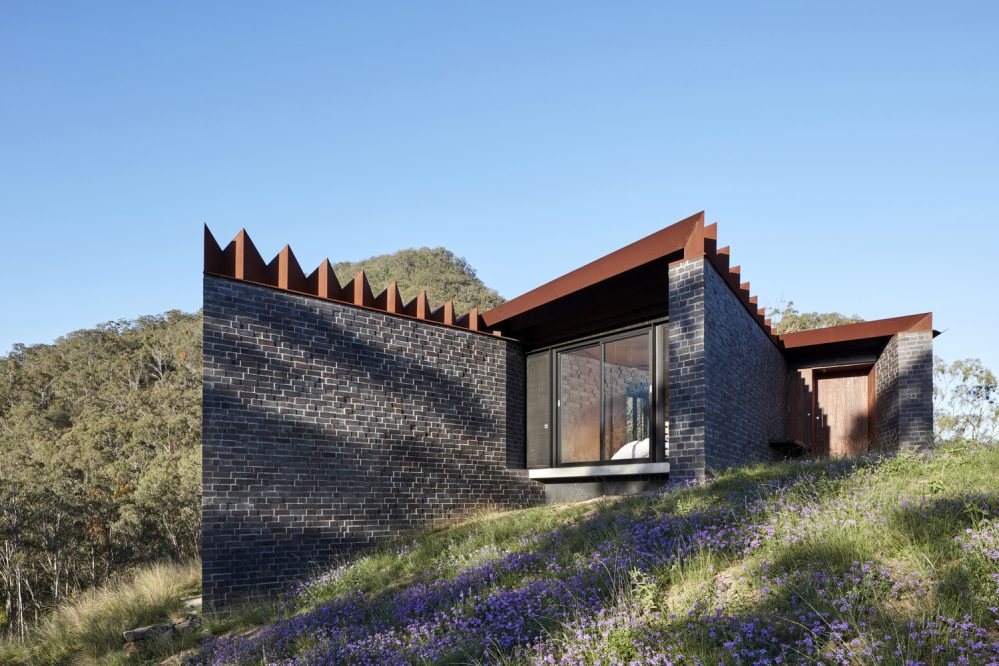 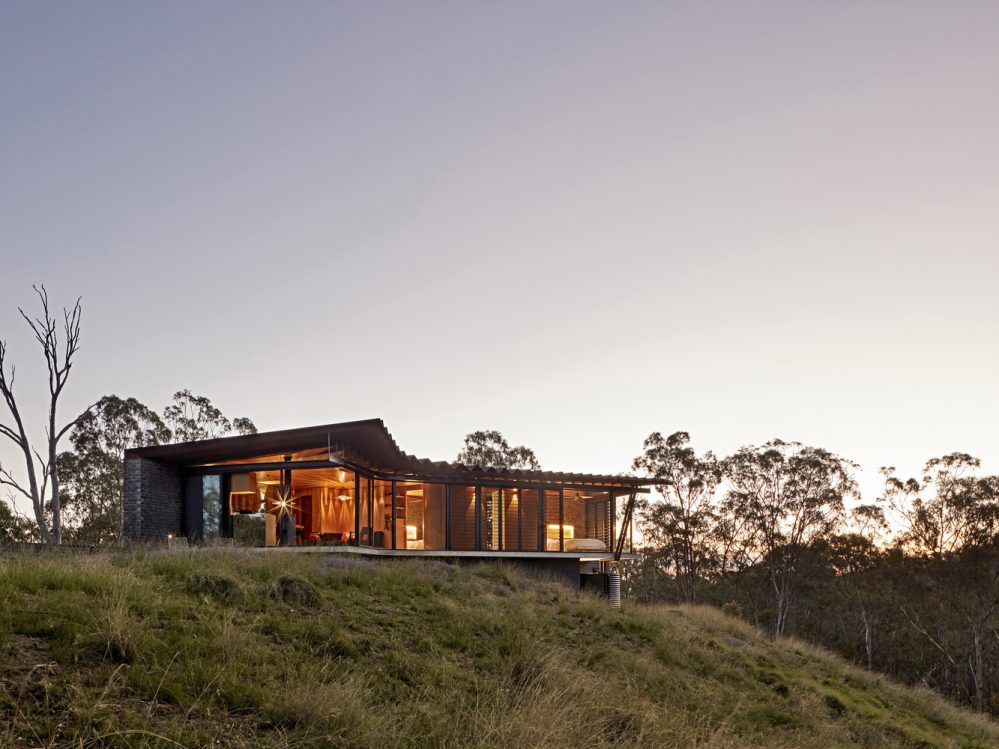 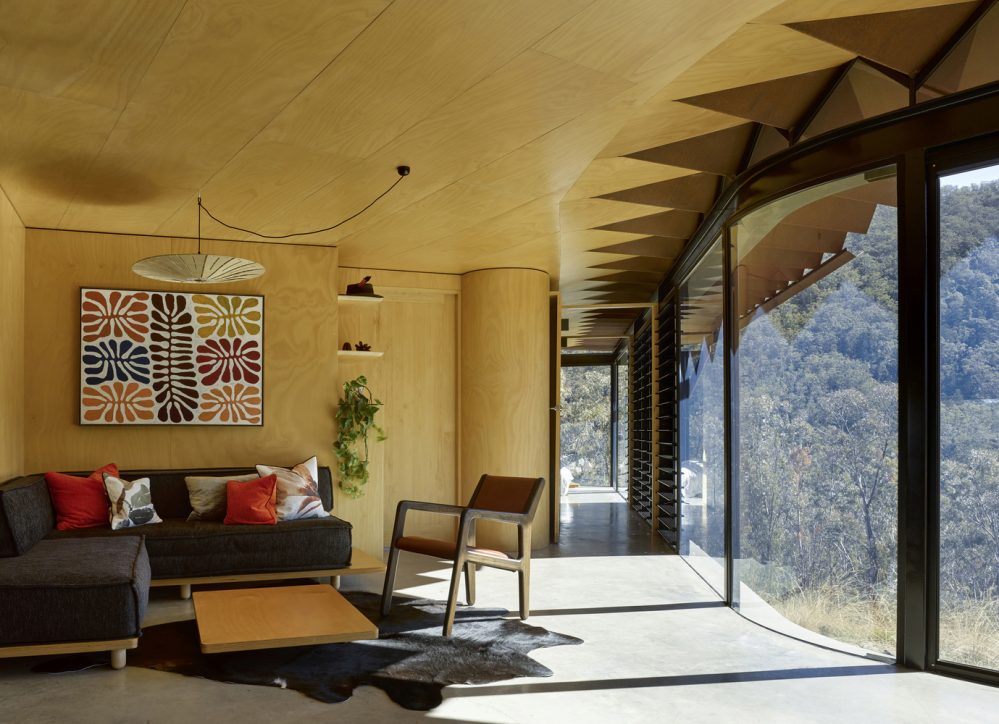 On the inside, the Bellbird Retreat is no less impressive and has the rich golden hues of locally grown indigenous hoop pine which has been used throughout the property for things like joinery, doors, walls, and the ceilings. The bedroom windows are orientated towards the spectacular ‘morning’ views, with living spaces capturing the just as eye-catching ‘evening’ views as the last rays illuminate the stunning Condamine Gorge escarpment. A breathtakingly brilliant piece of Australian architecture from Steendijk Architects. 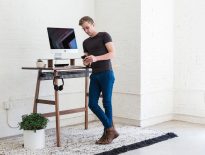 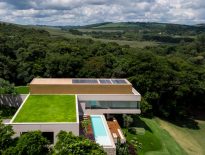