There are some absolutely cracking examples of collaborations in the motorcycle industry but this brilliant looking, decidedly retro, Gasoline Motor Co x Sailor Jerry Custom Triumph Scrambler is undoubtedly one of the most aesthetically appealing we’ve encountered here at Coolector HQ. Two excellent brands in the shape of Sailor Jerry and Gasoline Motor Co have joined forces to deliver an eye-catching and uncompromising steed that will turn heads aplenty. 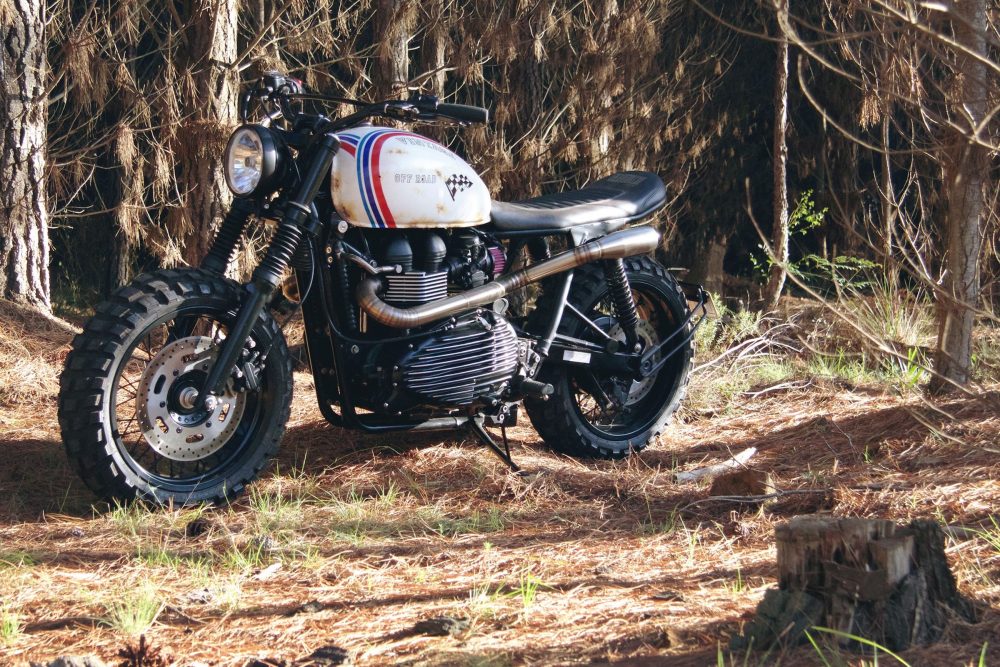 The Gasoline Motor Co x Sailor Jerry Custom Triumph Scrambler is one robust looking machine that looks like it has already seen plenty of adventure in its lifetime. This stunning ride is crafted upon a Triumph Scrambler which was first released back in 2006 and takes design inspiration from the already popular Triumph Bonneville, but it has included an array of modifications to give it some off-road ability and highly distinctive visual impact.

With a number of cleverly conceived design alterations, the stand out one with the Gasoline Motor Co x Sailor Jerry Custom Triumph Scrambler is the addition of twin high exhaust pipes down the side – which would have been a common sight on classic scramblers from the 1950s and ’60s – as it keeps them up and away from the terrain, which has the added incentive of keeping them dry when working your way across water. 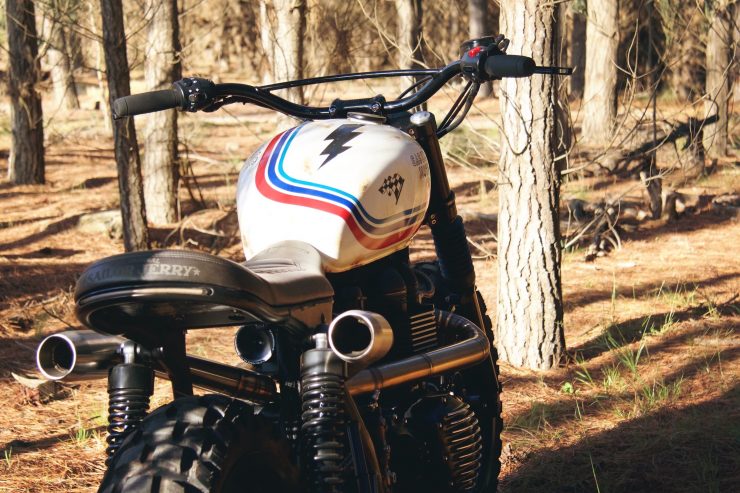 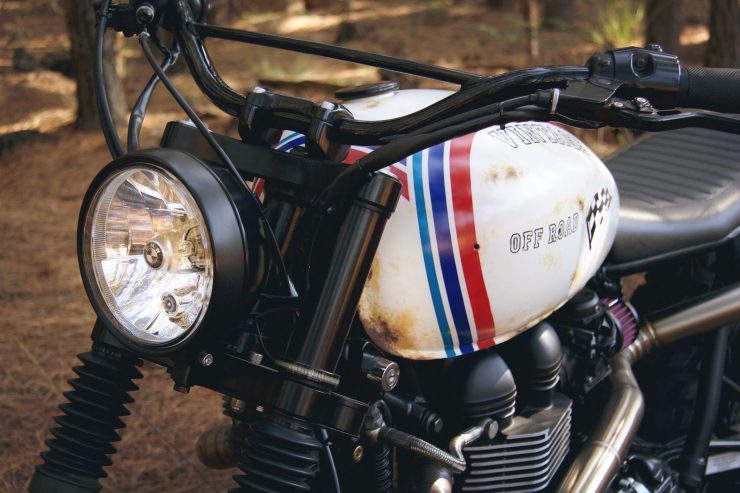 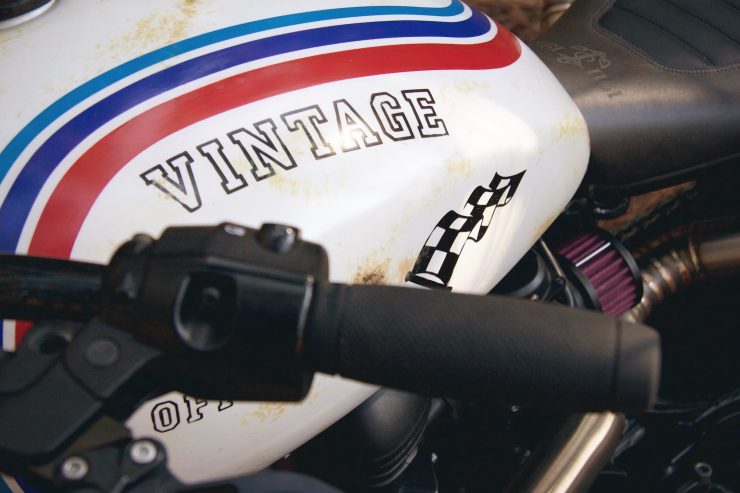 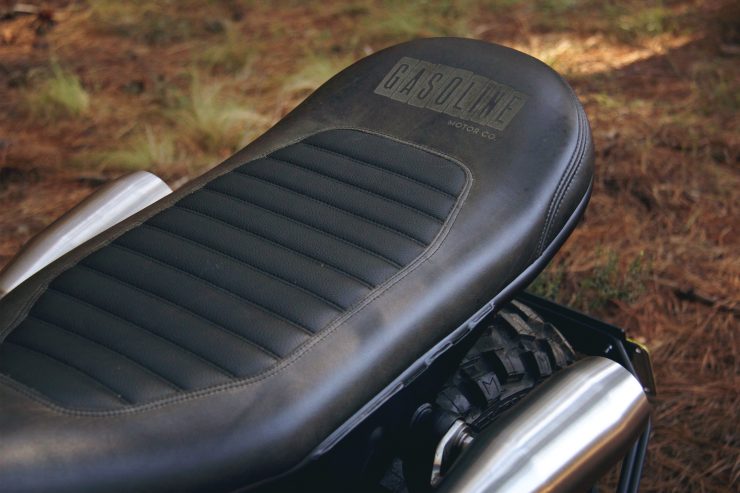 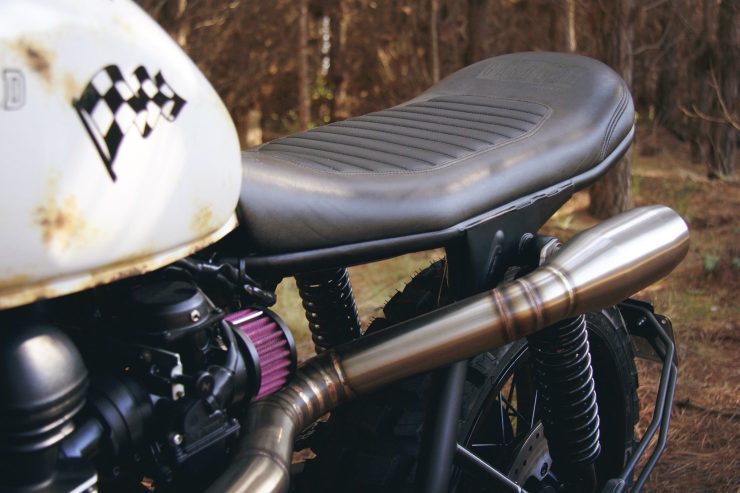 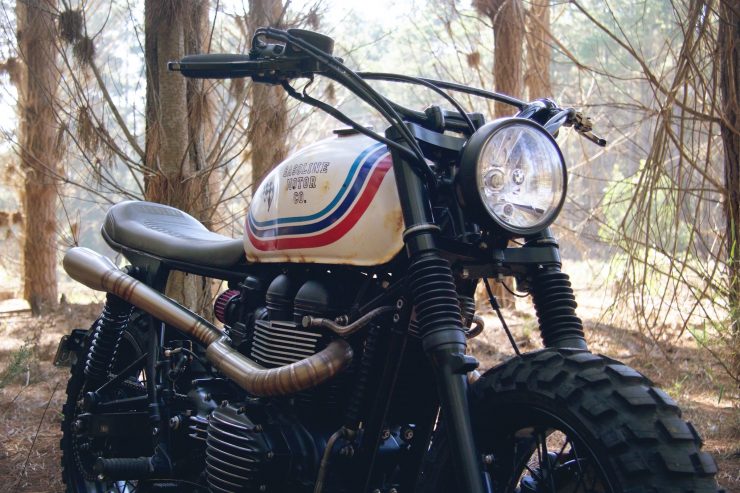 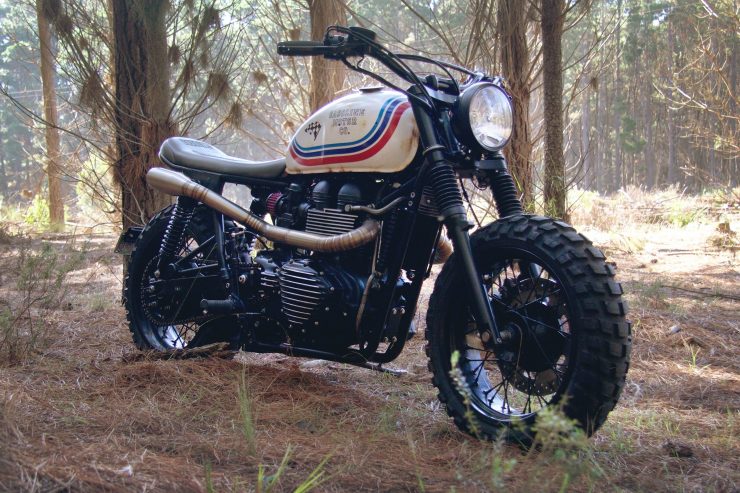 The Gasoline Motor Co x Sailor Jerry Custom Triumph Scrambler is also fitted with a 270° crank rather than the 360° crank which has helped shift torque down the rev range, and delivers more bottom end power albeit at the expense of some of the high end horsepower. This has been mitigated however, as Gasoline Motor Co quickly noticed they could get back this horsepower and gain quite a bit more with a few carburetor and exhaust upgrades so it boasts an unparalleled performance that has to be seen to be believed. 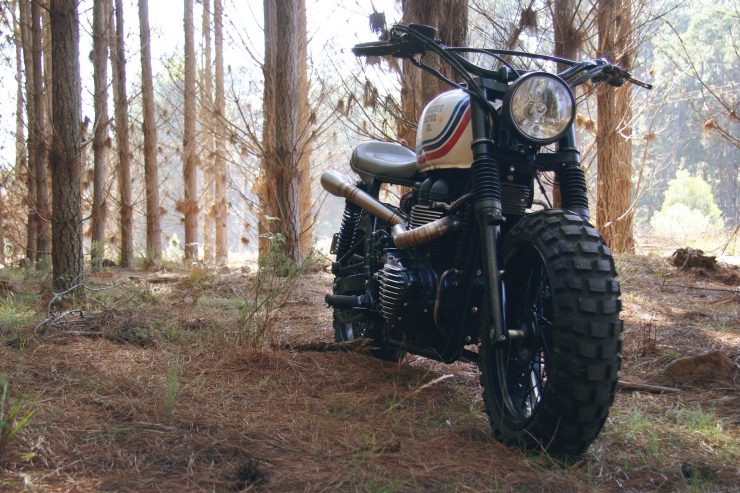 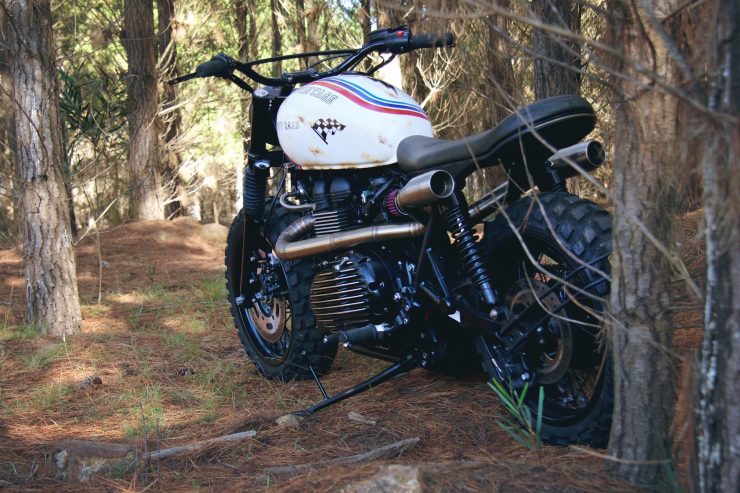 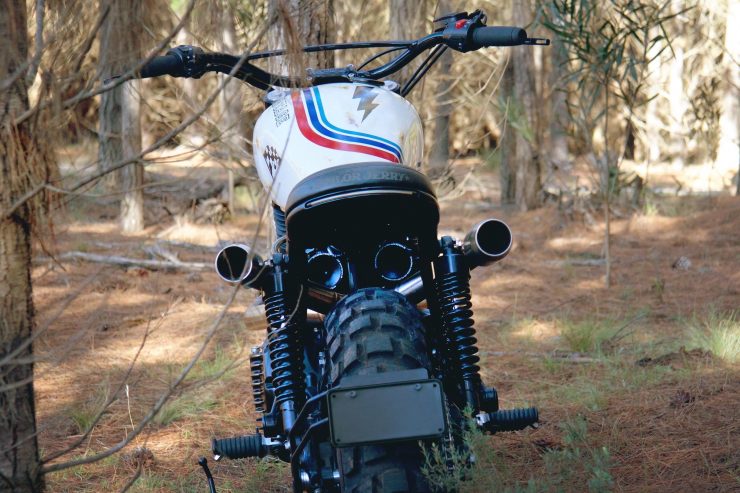 To achieve the great look and feel with this bike, the subframe was modified for the new seat and an LED taillight was added (with built-in indicators). In addition to this, wider rims were laced to the original hubs, before these were fitted with new chunky off-road tires, and the stock fenders to deliver a superior riding performance. New scrambler-height rear shocks were added to the machine to lift the tail a little and enhance ground clearance over the stock road shocks. There were also new off-road handlebars added, and twin high-performance exhausts, high-flow pod air filters, and a new lower profile headlight which was borrowed from a BMW bike.

When the build was finished, the bike was fitted with a tank by Retroline in Australia based on the racing stripes used on Premier motorcycle helmets. Following this, a second tank was created by celebrated tattoo artist Rhys Gordon, and this will be the tank that is fitted to the bike when it is being used day in, day out. 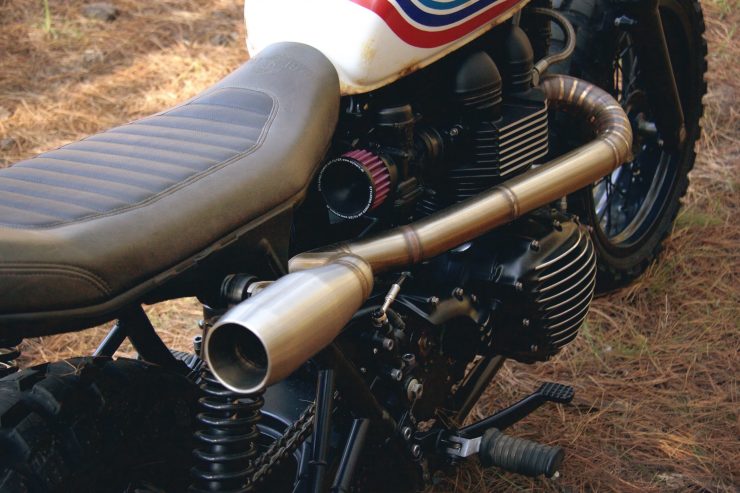 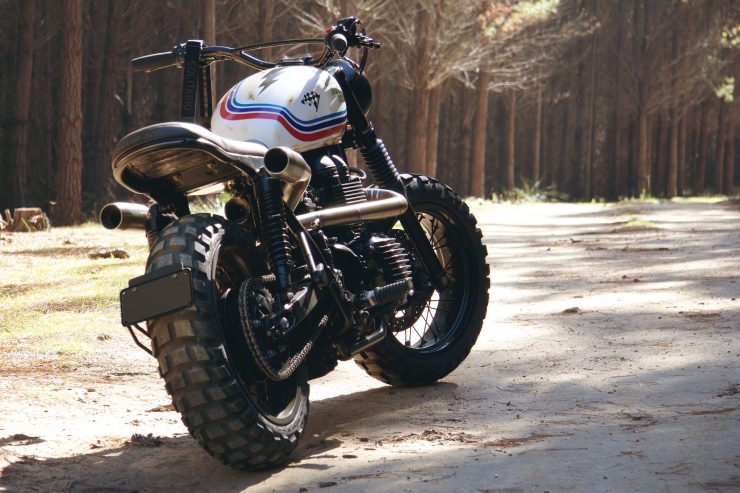 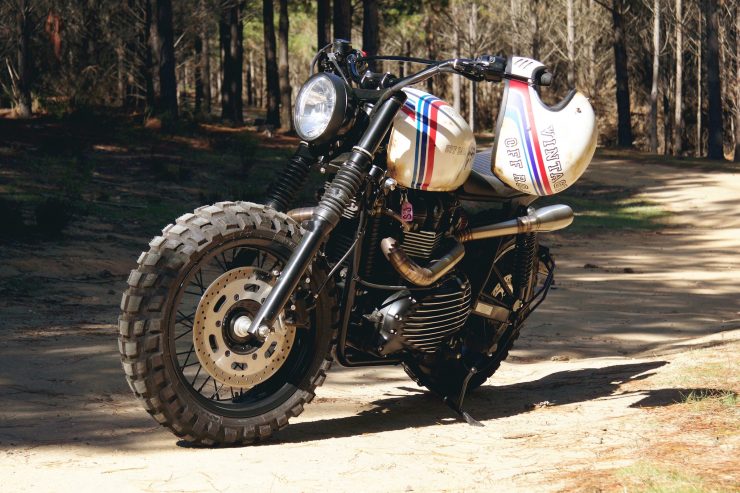 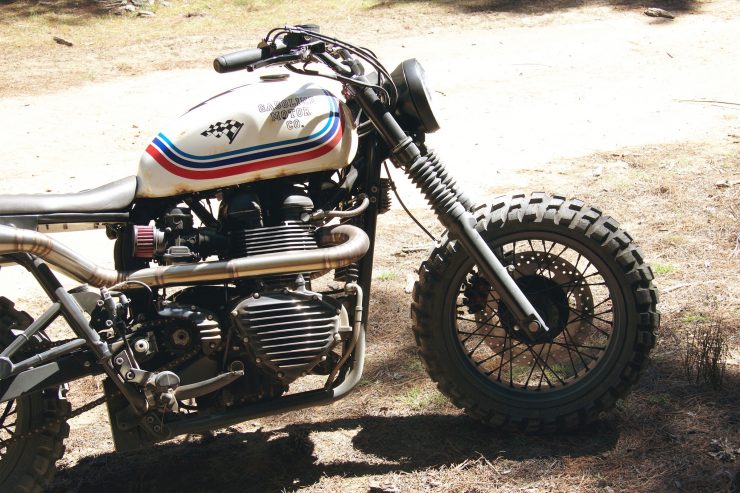 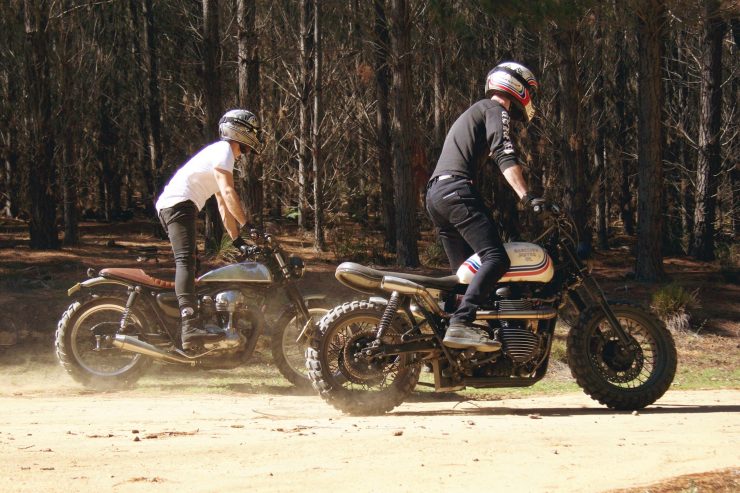 Designed to be given away as a prize by Sailor Jerry, this magnificent looking machine has certainly captured our imagination here at Coolector HQ. It is unquestionably a cool looking ride that has been superbly conceived and crafted by Gasoline Motor Co to deliver the sort of superb motoring performance which they have become synonymous with.