When you think of sandy beaches, it’s probably not Canada that is the first country to spring to mind but this eye-catching Leblanc Residence from Atelier Pierre Thibault Architects is situated in the harsh climate of Canada’s Atlantic coast and this is something which influenced the architecture studio with the maritime style design of the home which is raised on pilotis above a sandy site. 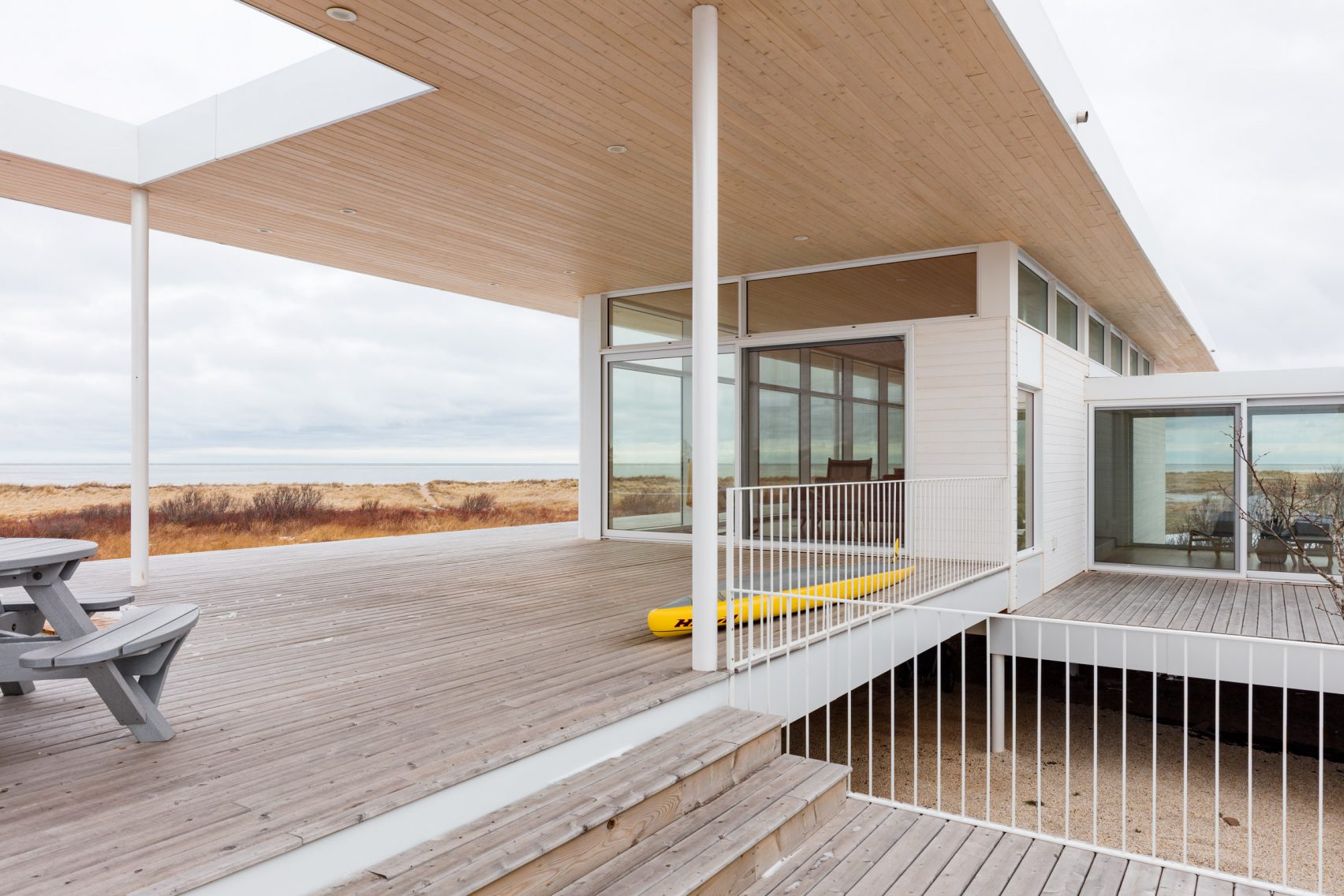 The Leblanc Residence has a very low slung profile that doesn’t impact at all upon the rural, relatively baron landscape in which it is located. It can be found in Grand-Barachois, a remote village in the province of New-Brunswick which overlooks Canada’s Northumberland Strait. The reason Leblanc Residence is elevated is to allow for the pools of water that gather around the house to flow underneath without damaging the interiors and the wooden clad the exterior and these are painted white to help protect them from the sea air.

It’s fair to say the Leblanc Residence is more suited to those who love the bracing sea air of the Atlantic as opposed to beach days in the sun and it has a cleverly designed layout that makes the most of its unique spot on the Canadian coast. All the materials used in the build had to be carefully chosen so as to age well in a challenging climate and the long exterior deck that fronts the house has been left untreated so that it will turn to a silvery grey colour over time. 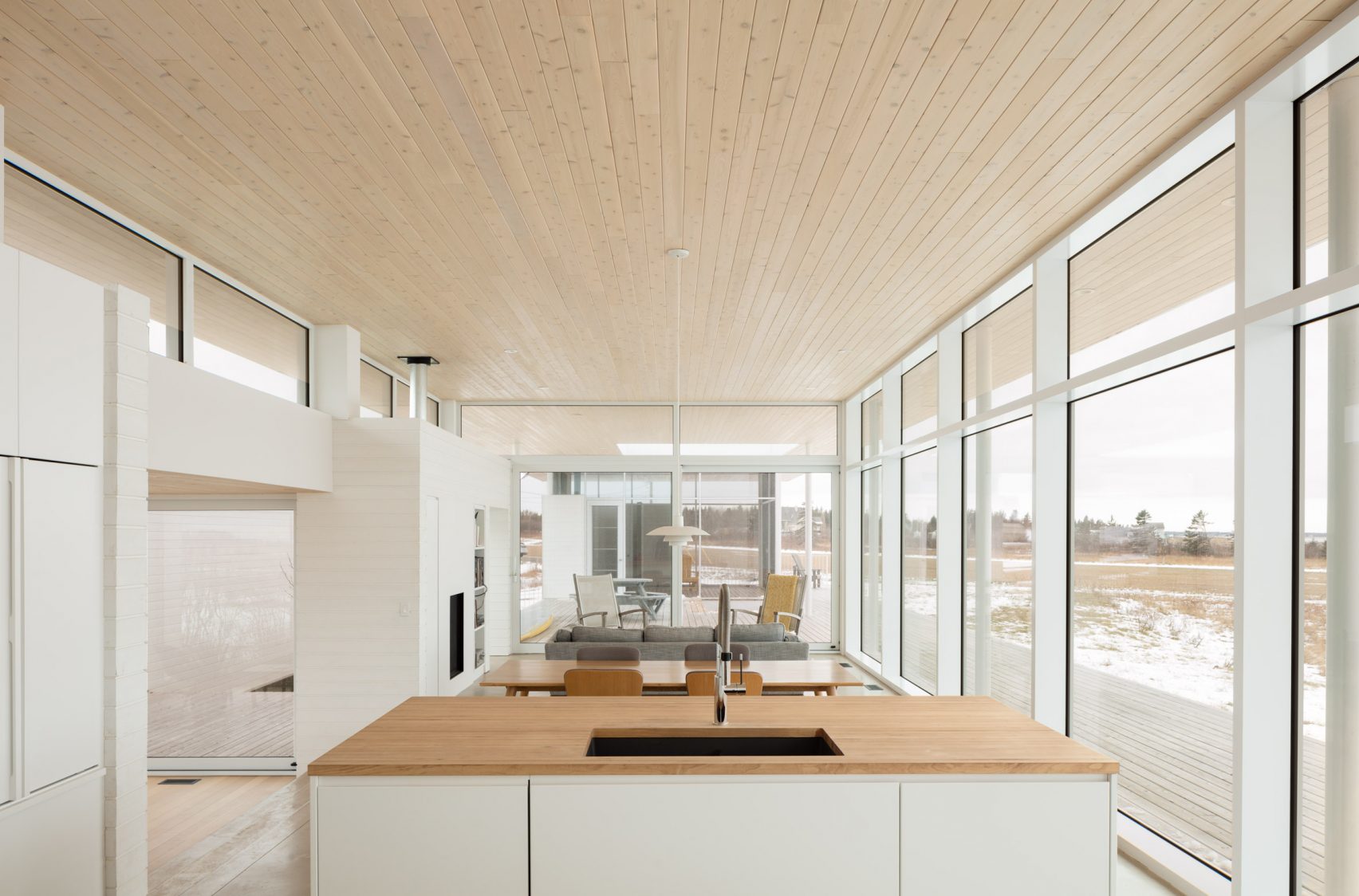 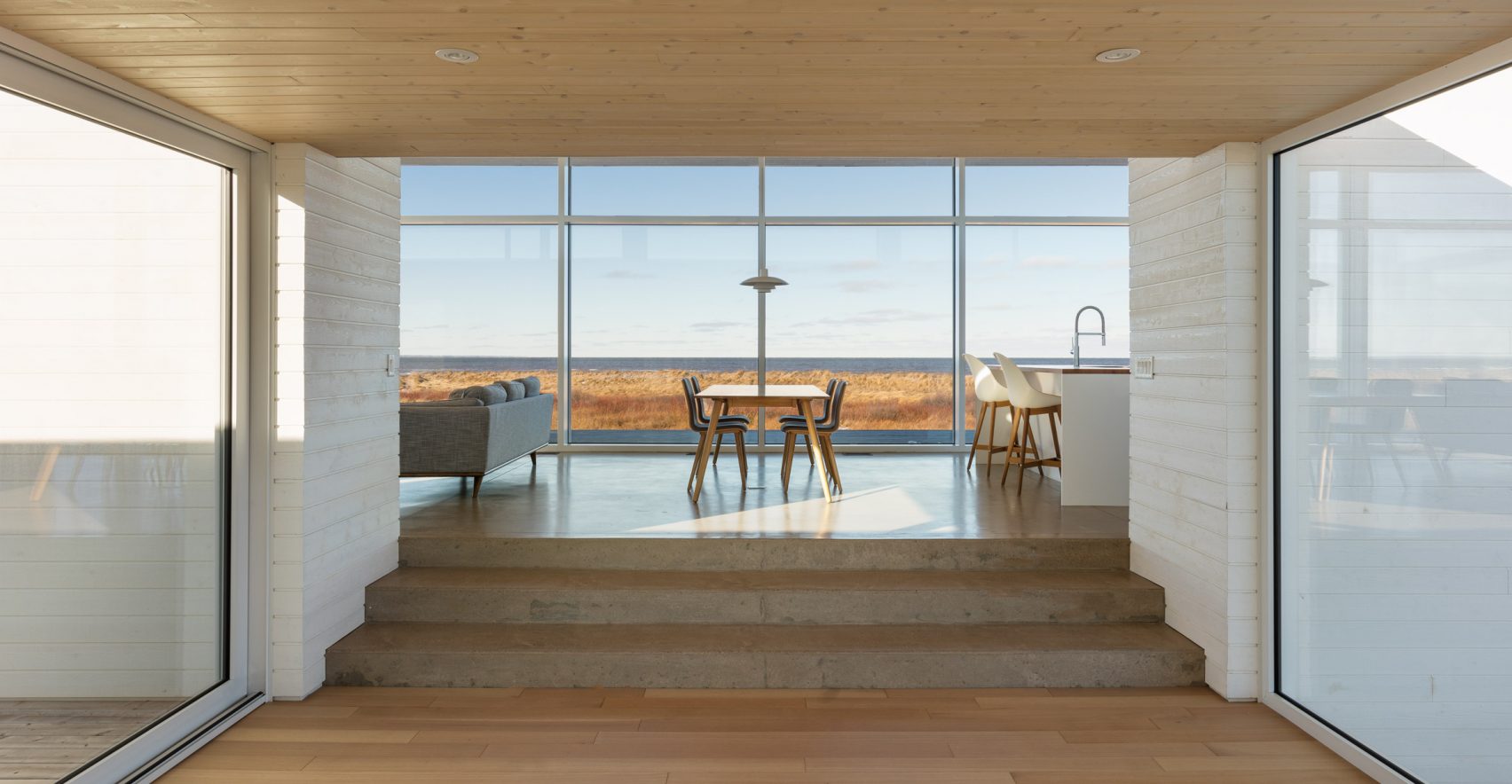 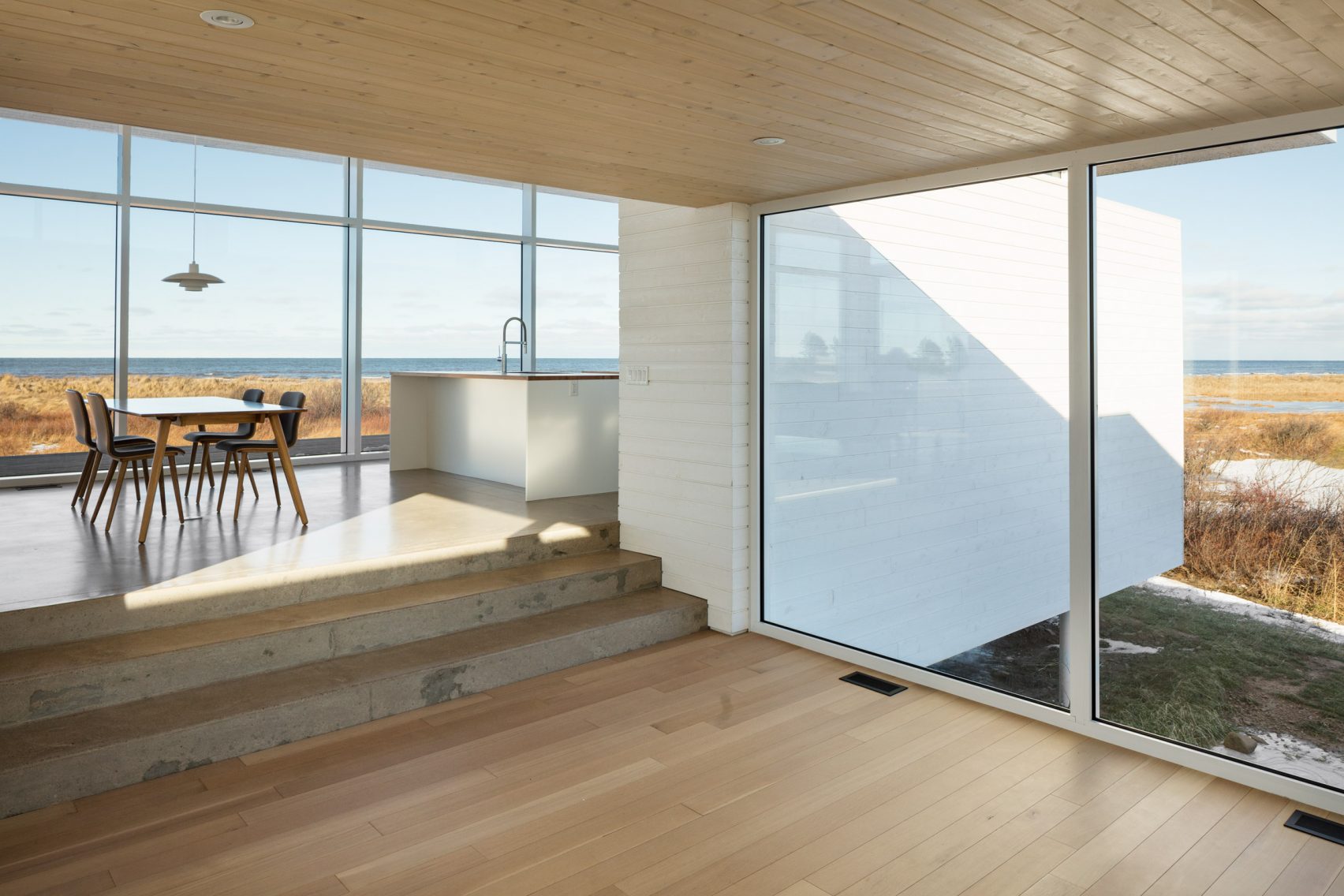 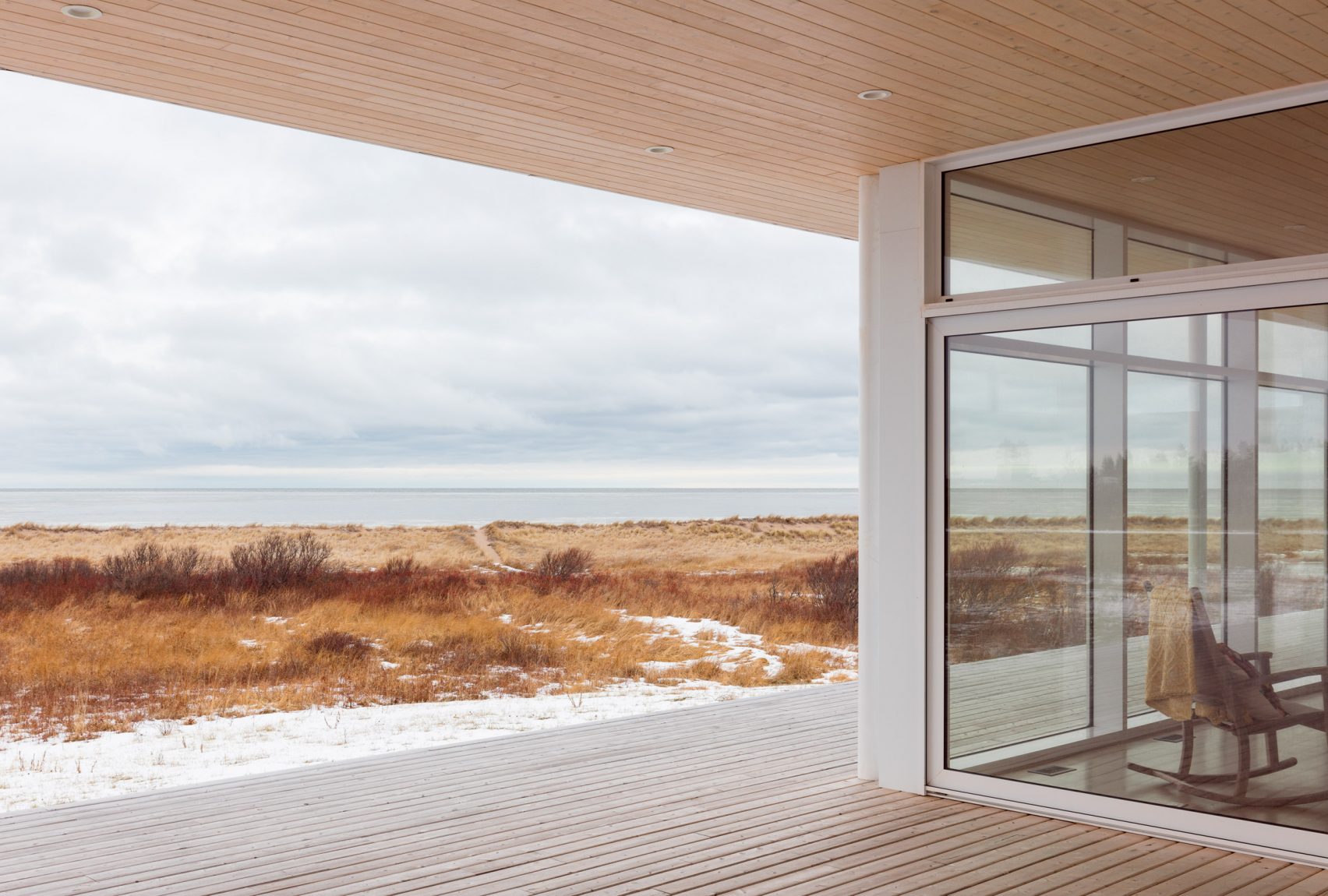 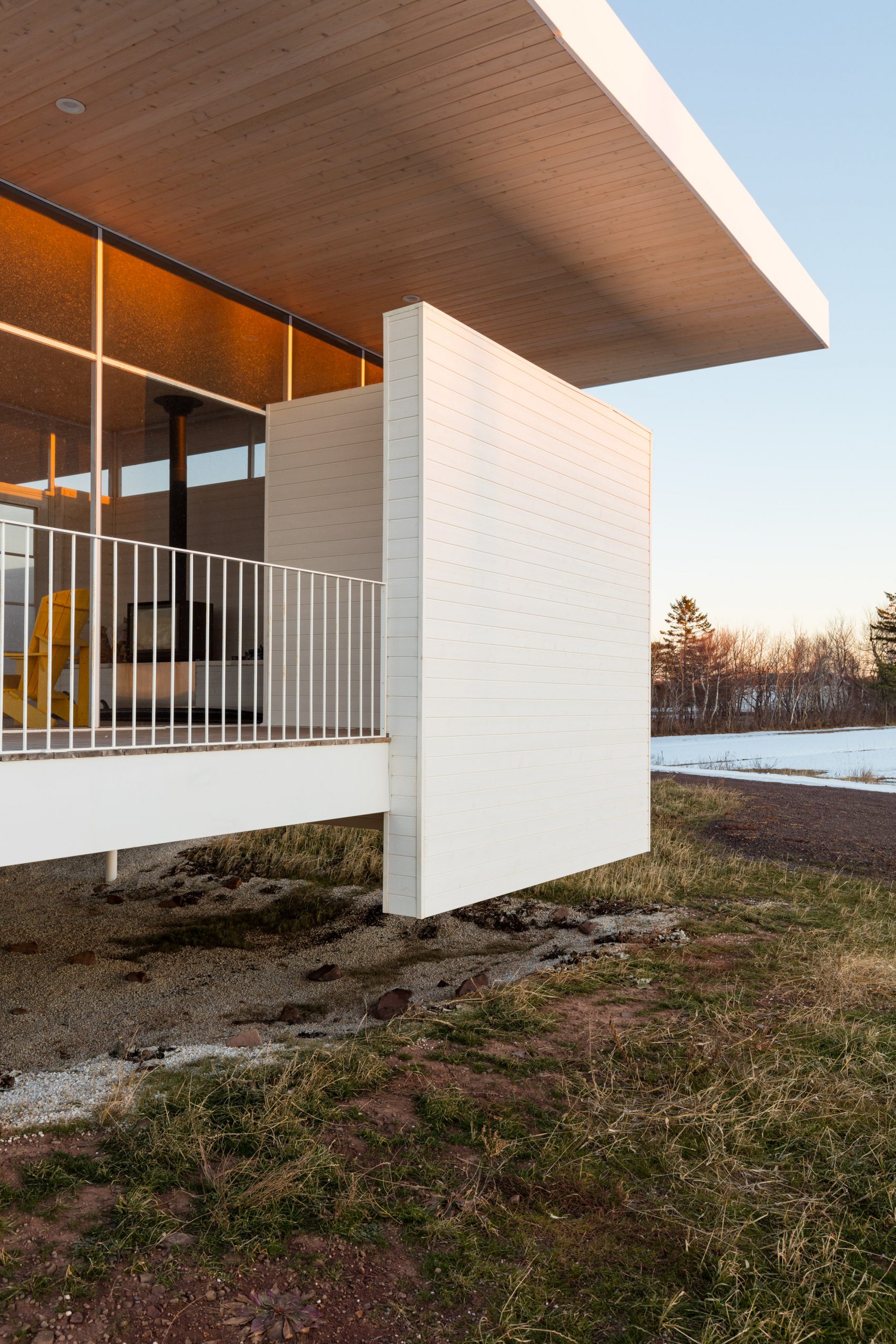 The architects behind the Leblanc Residence designed the home as two separate pavilions that are protected by a wide, overhanging roof – a form that is intended to blend in with the horizon beyond. It has steel columns which are there to support the roof and are painted white to bolster them against the salty Atlantic air’s corrosive effects. The first of the structures is more opaque and enclosed, and is where you’ll find the home’s three bedrooms along a corridor. It also has the main entrance, which features a glazed passageway that offers views to the ocean. 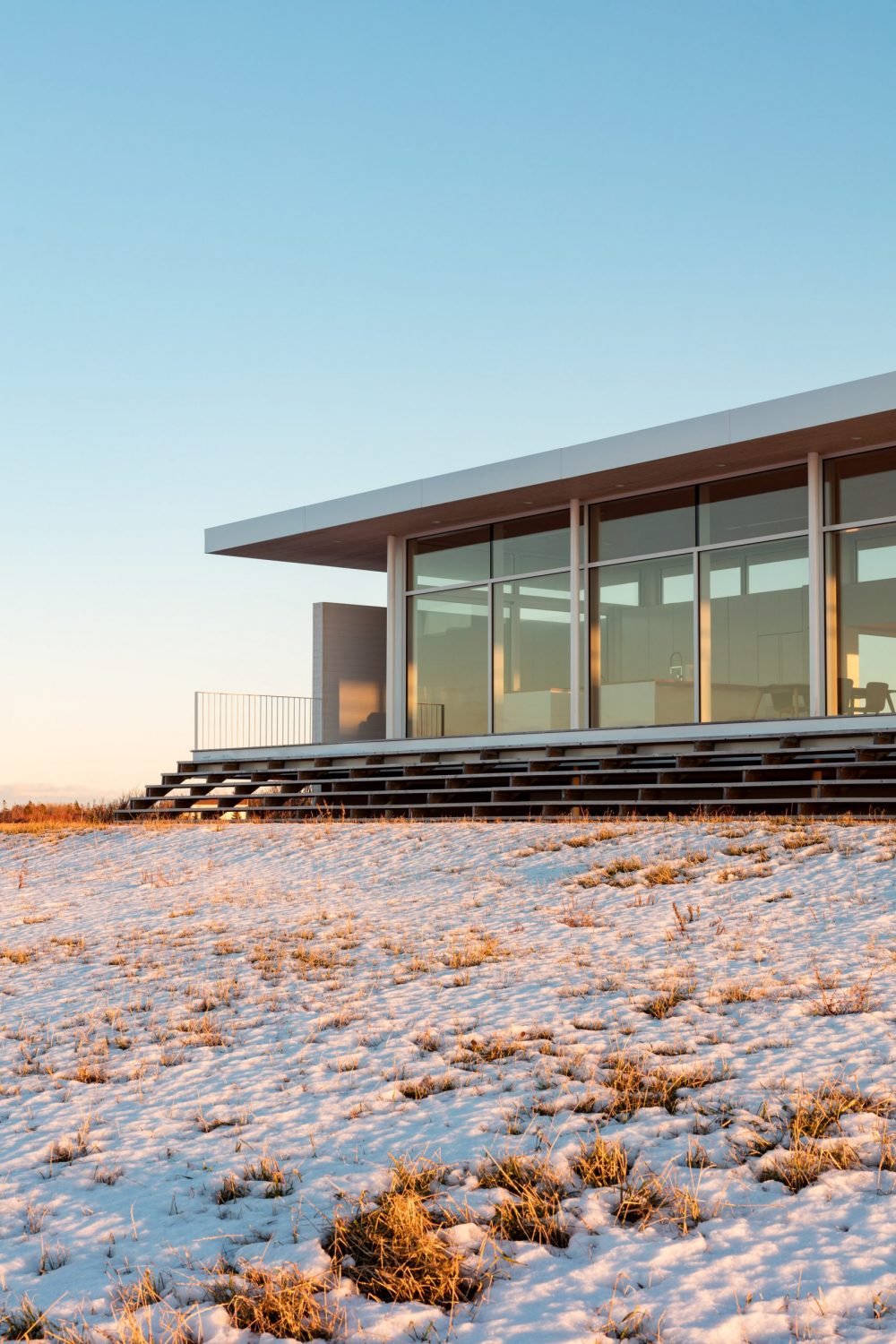 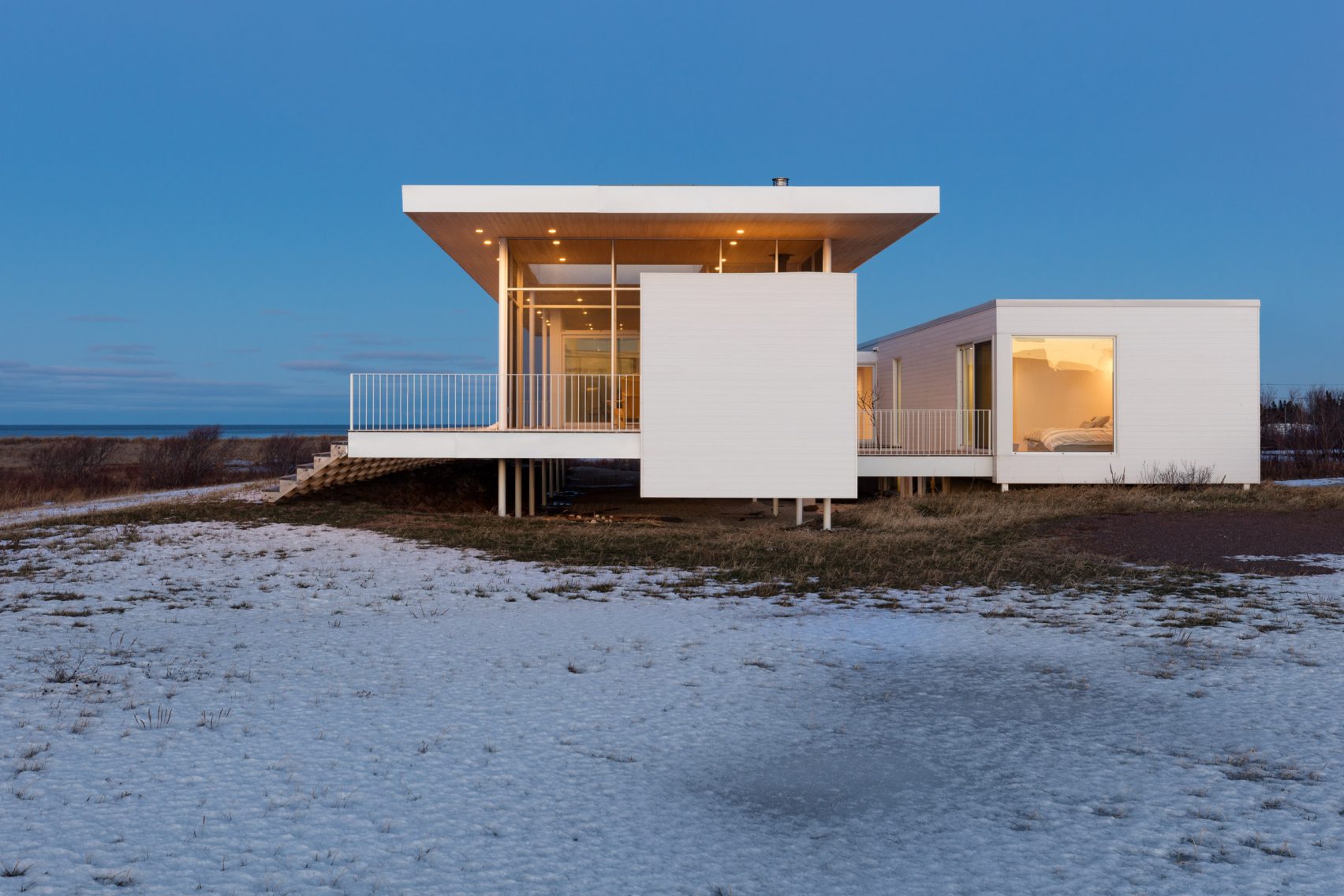 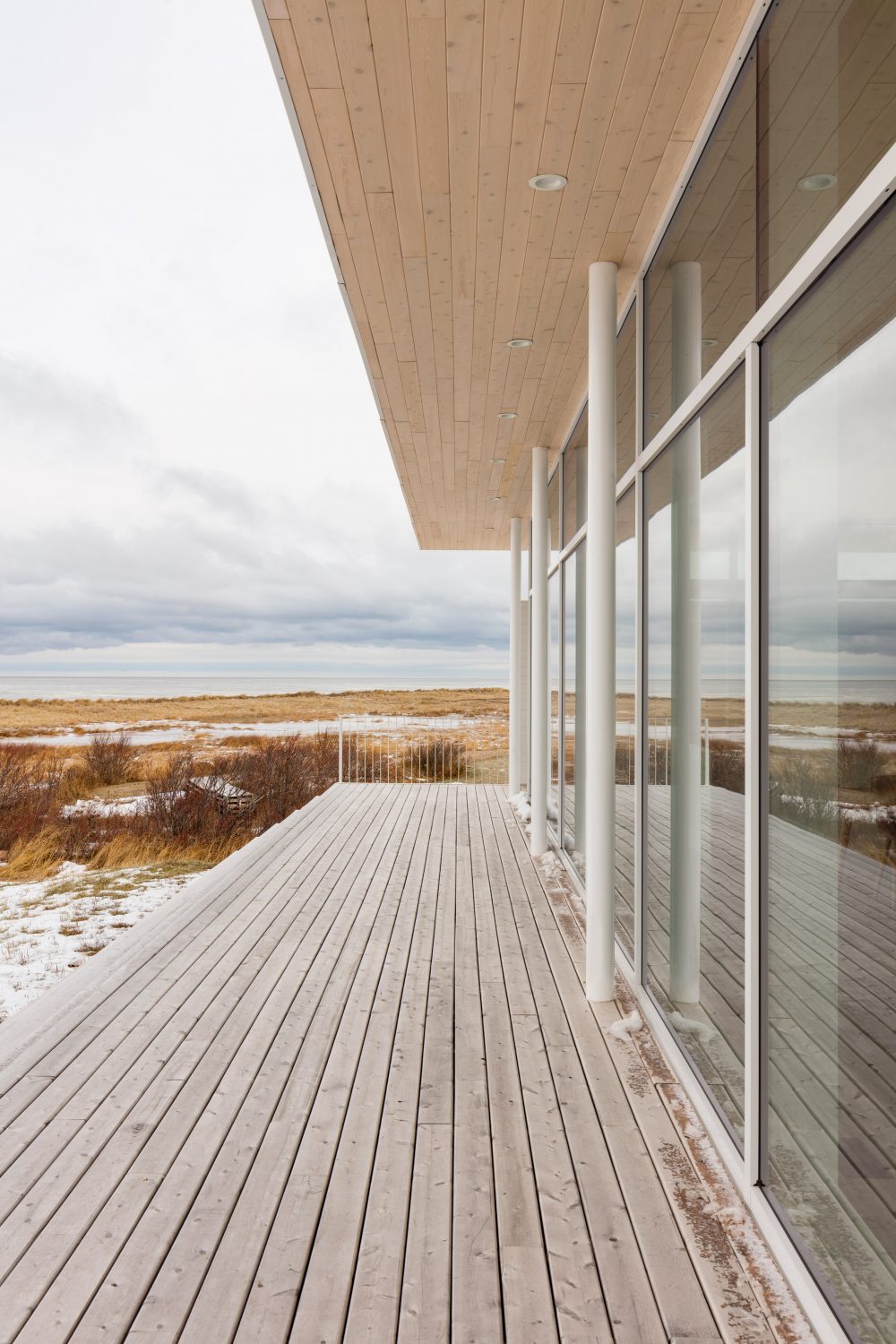 In order make the Leblanc Residence as private as possible given its beachside location, the bedrooms have limited openings to the landscape. Instead, they overlook a courtyard between both halves of the homes, which is where you’ll also find an interior garden, which is built around a tree to add a striking aesthetic impact to the home. The second pavilion, which is amply glazed and faces out towards the Atlantic Ocean, is the perfect counterbalance to where the bedrooms are found. Three concrete steps lead from the entrance foyer to an open kitchen, living and dining room with expansive views of the maritime landscape.

It is the living spaces of the Leblanc Residence that really excel and they open out onto a wide deck, which is partially covered by the projecting roof structure. The outdoor space of the home benefits from a screened porch which occupies the eastern end of the terrace and allows for a sense of outdoors when you’re sitting within. A series of steps runs the entire length of the home to provide additional seating overlooking the glorious views of the Atlantic Ocean. 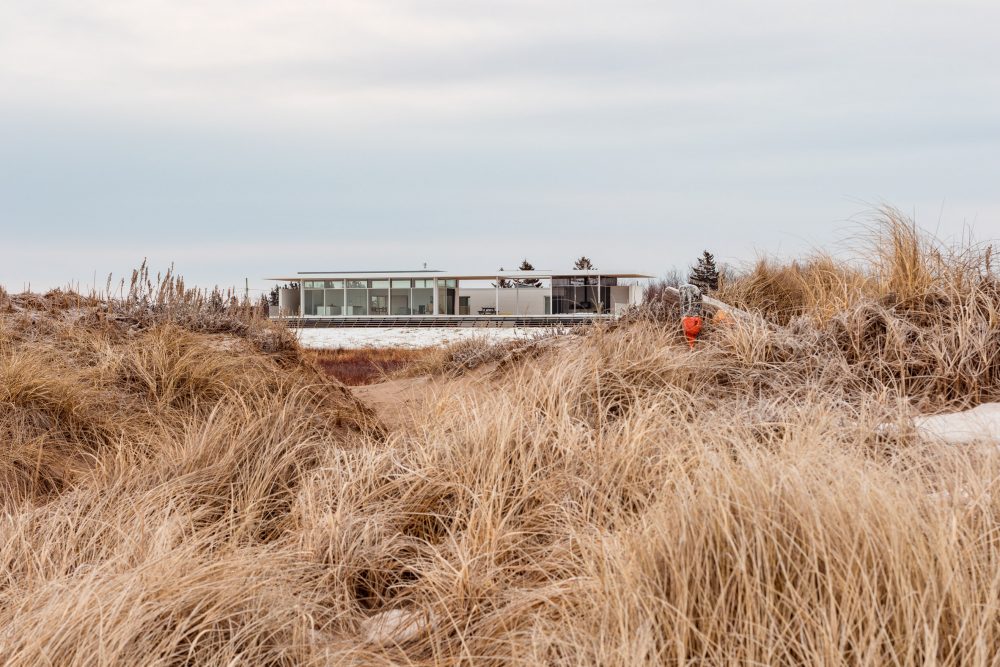 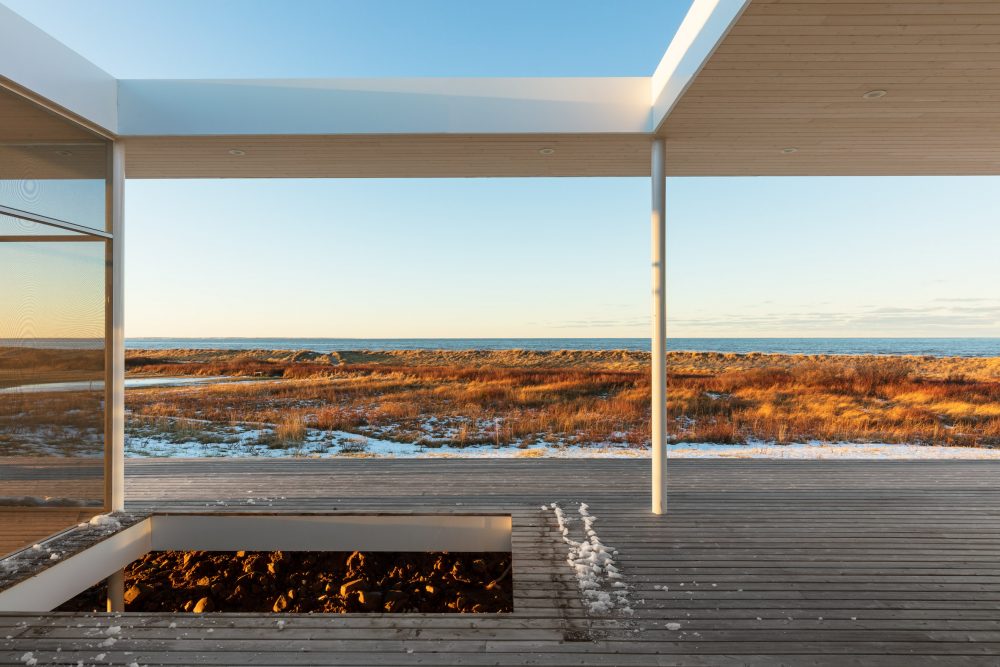 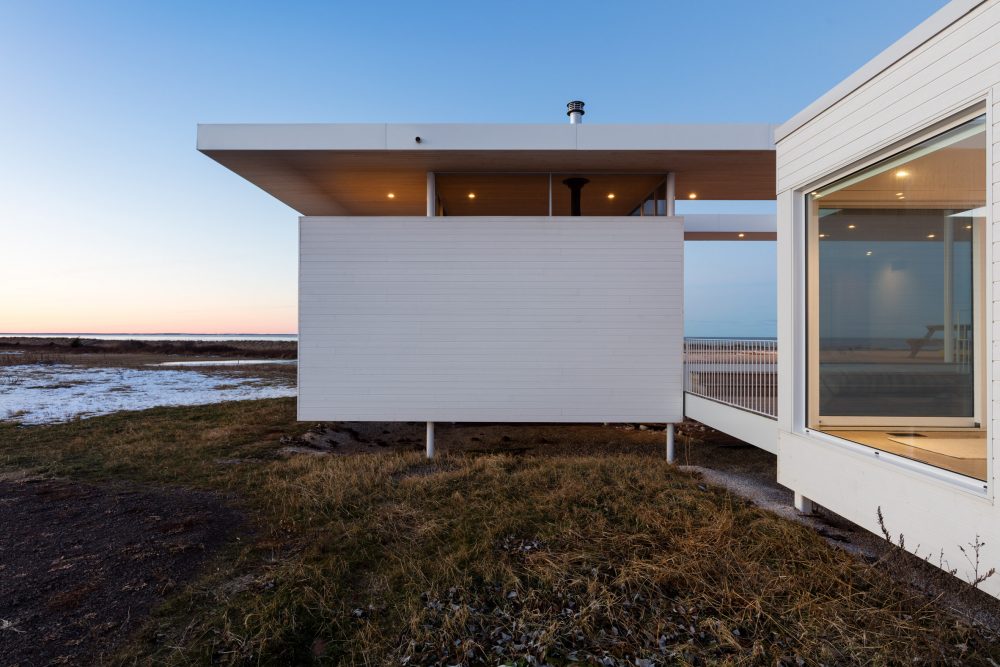 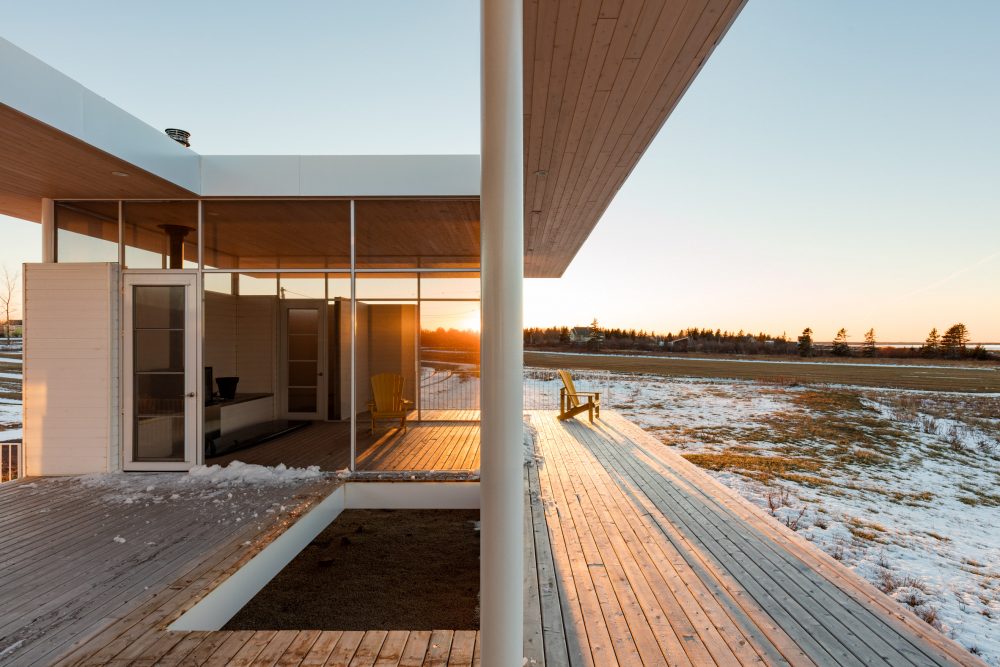 The Leblanc Residence has got a mighty restful position in the world and time spent on the Canadian coast overlooking the Atlantic is certainly going to offer a relaxing spot for the lucky owners. The architects have done a first class job of not impacting on its privileged spot and have filled it with clever design features and materials that mean it will be a great home for many years to come.