When we think of desktop computers here at Coolector, it’s fair to say our first thoughts will typically gravitate towards Apple and their fantastic machines but, lately, we’ve begun to consider alternatives and one of the most astounding that we’ve encountered is this Microsoft Surface Studio – which, having looked at both its aesthetics and capabilities, might just put an end to Apple’s dominance.

The Microsoft Surface Studio has really pushed the boat out from a specifications point of view in an attempt to end Apple’s stranglehold on the industry and, from what we’ve seen so far, there’s every chance that this amazing looking machine might just convert a fair from Mac lovers over to a whole new operating system and way of working.

It’s difficult to know where to begin with the Microsoft Surface Studio such is its extensive array of eye-catching features but perhaps the most impressive amongst them is the 28” PixelSense™ Display which gives you a vast canvas on which to operate and it is made all the better by the ability to use it upright or, if you prefer, draw on it like a drafting table. It is a highly versatile solution that is immediately going to make the Microsoft Surface Studio appeal to a lot of people working within the creative industries. 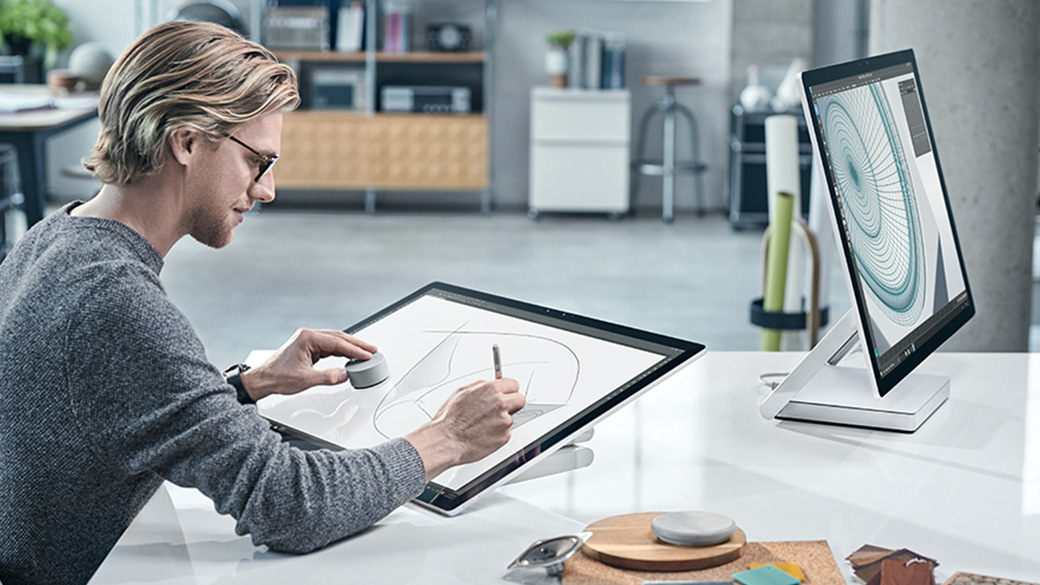 With 13.5 million pixels of true-to-life colour and clarity positively jumping off the PixelSense™ Display, you’ll be mesmerised by the sheer quality of the imagery throughout and with i5/i7 Intel® Core™ processors and an NVIDIA® GeForce® dGPU, the Microsoft Surface Studio superbly brings all of your creations to life and won’t let you down at all from a performance point of view.

Aesthetically speaking, minimalist design features abound with the Surface Studio from Microsoft and the understated, sleek finish, despite the large screen, leaves only a small footprint and won’t take up an abundance of desk space. Clever design features help it to be as functional as possible and if you’re working within a creative environment, the Microsoft Surface Studio could just be the perfect device for you.

It’s not just the impressive specifications of the Microsoft Surface Studio that help to set it apart, it also has plenty of additional extras which include a new tool called Surface Dial. This allows you to press and hold to bring up a radial list of tools to do the tasks you love in programmes like Adobe CC, Bluebeam and more. Or, if you’d rather, you can simply place Surface Dial directly on the screen and watch as a colour picker or a ruler magically appear for you to use. It’s all mighty impressive stuff.

For anyone looking to make the transition from Apple computers onto something else as seamless and rewarding as possible, it looks like the Microsoft Surface Studio could just be the machine that you’ve been waiting for. Impeccably well designed, filled with first rate features, this might just be the Mac killer that Microsoft hope it can be.