There are certainly no shortage of luxury vintage cars that enthusiasts can get their hands on but, truth be told, you’ll find it difficult to find one that has quite as much old school cool and out and out charm as this Alfa Romeo Giulia Spider 1600 Veloce which is up to buy from the guys at Auxietre & Schmidt. With a price tag of €145k it obviously doesn’t come cheap but you’ll be getting your hands on a piece of automotive history if you add this to your classic car line up. 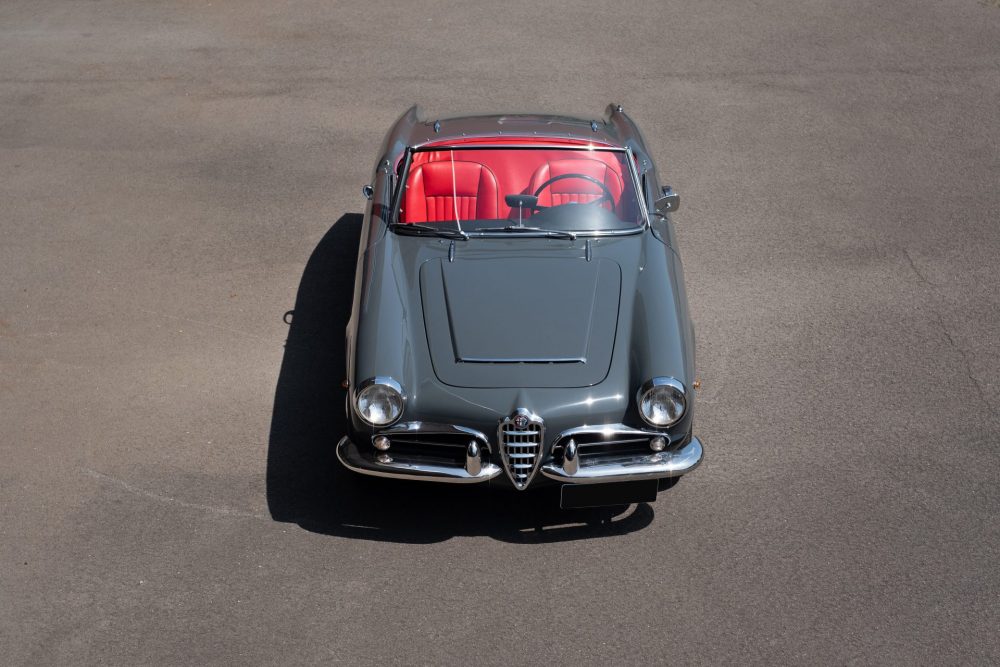 The Alfa Romeo Giulia Spider 1600 Veloce from Auxietre & Schmidt is, without question, the most sought-after variant of the Giulia and this one comes in the eye-catching, original colour combination that will turn heads every time the one makes it out of your garage. It is a European model with matching number engine and it is the last year of the iconic post-war design and this one comes with an extra set of wheels as well.

Boasting elegant coachwork which was designed and built by Pininfarina, the 1.3-litre Giulietta Spider was a huge success and continued virtually unchanged in 1.6-litre Giulia guise when the latter joined the Alfa line-up in 1962. A bonnet air scoop, which was necessary to clear the larger engine’s taller block, could be used to readily identify the new model. The capacity increase boosted maximum power of Alfa’s classic twin-cam four from 80 to 92bhp and the car’s top speed to 109mph. 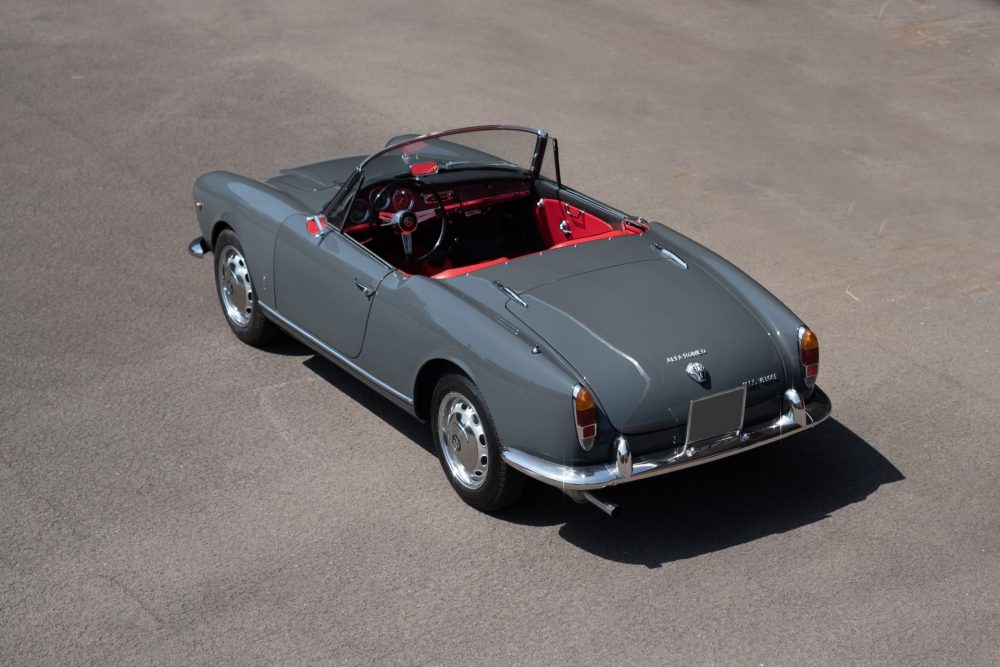 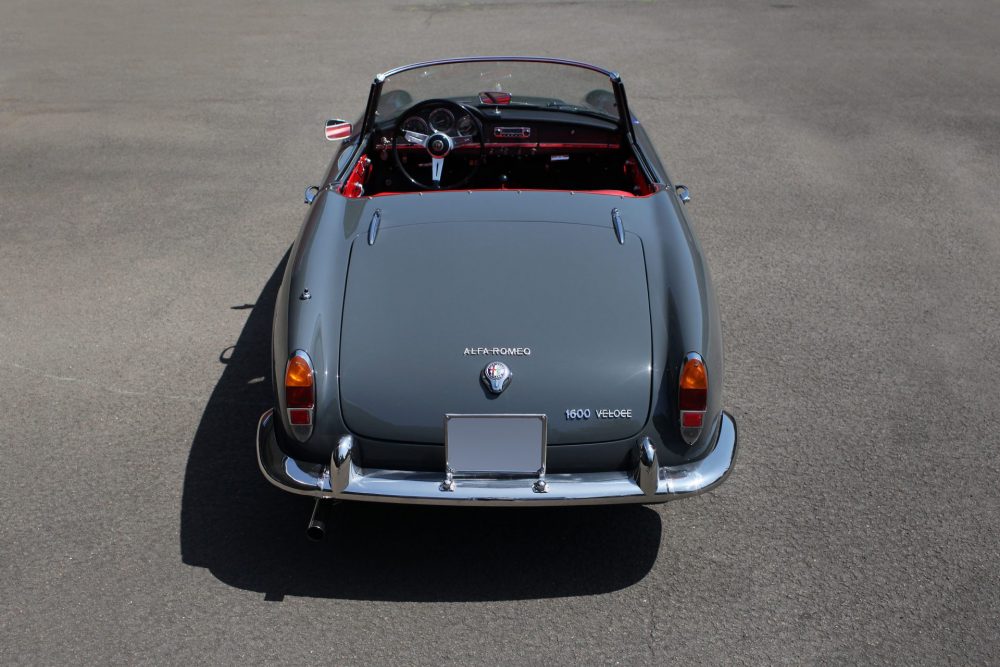 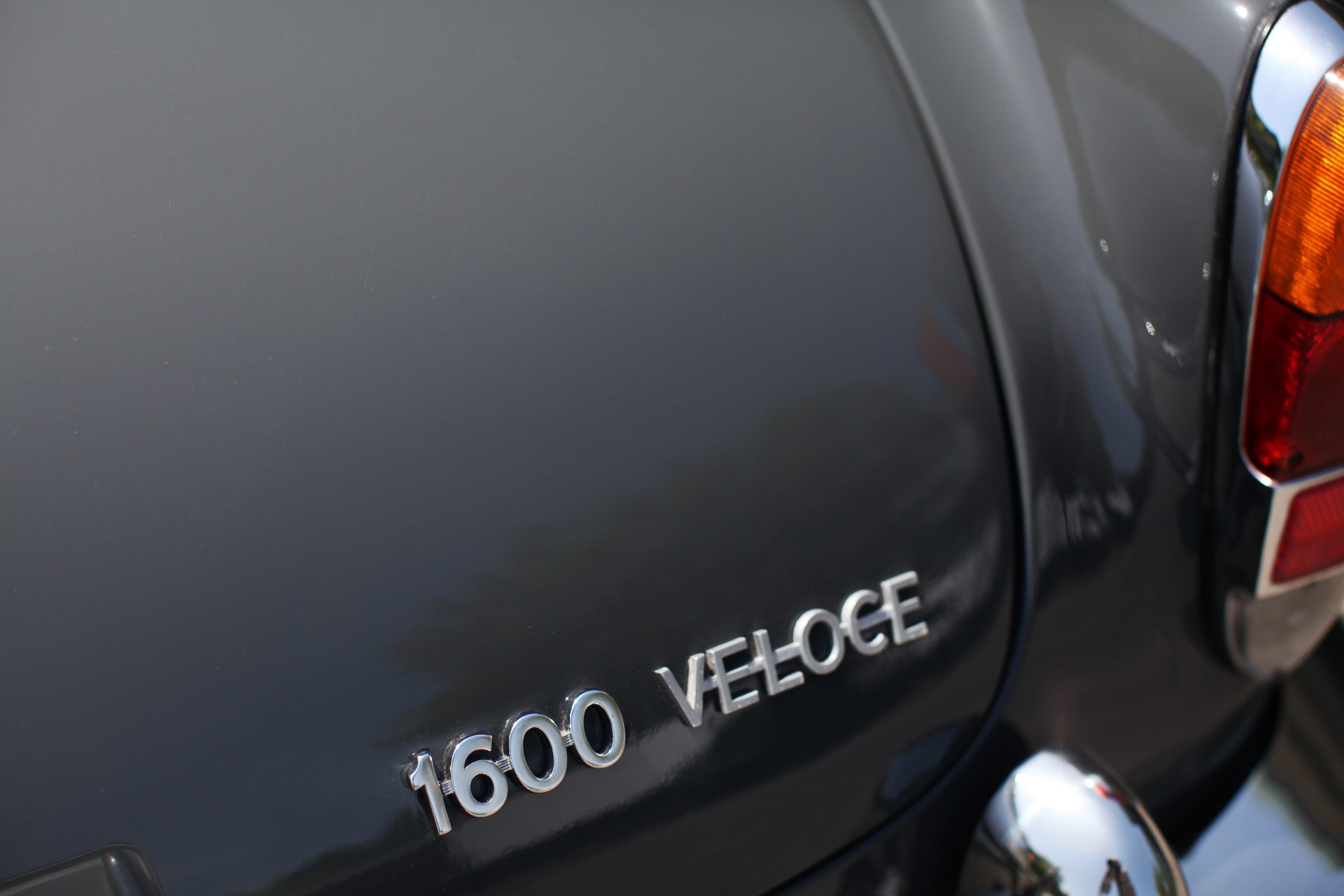 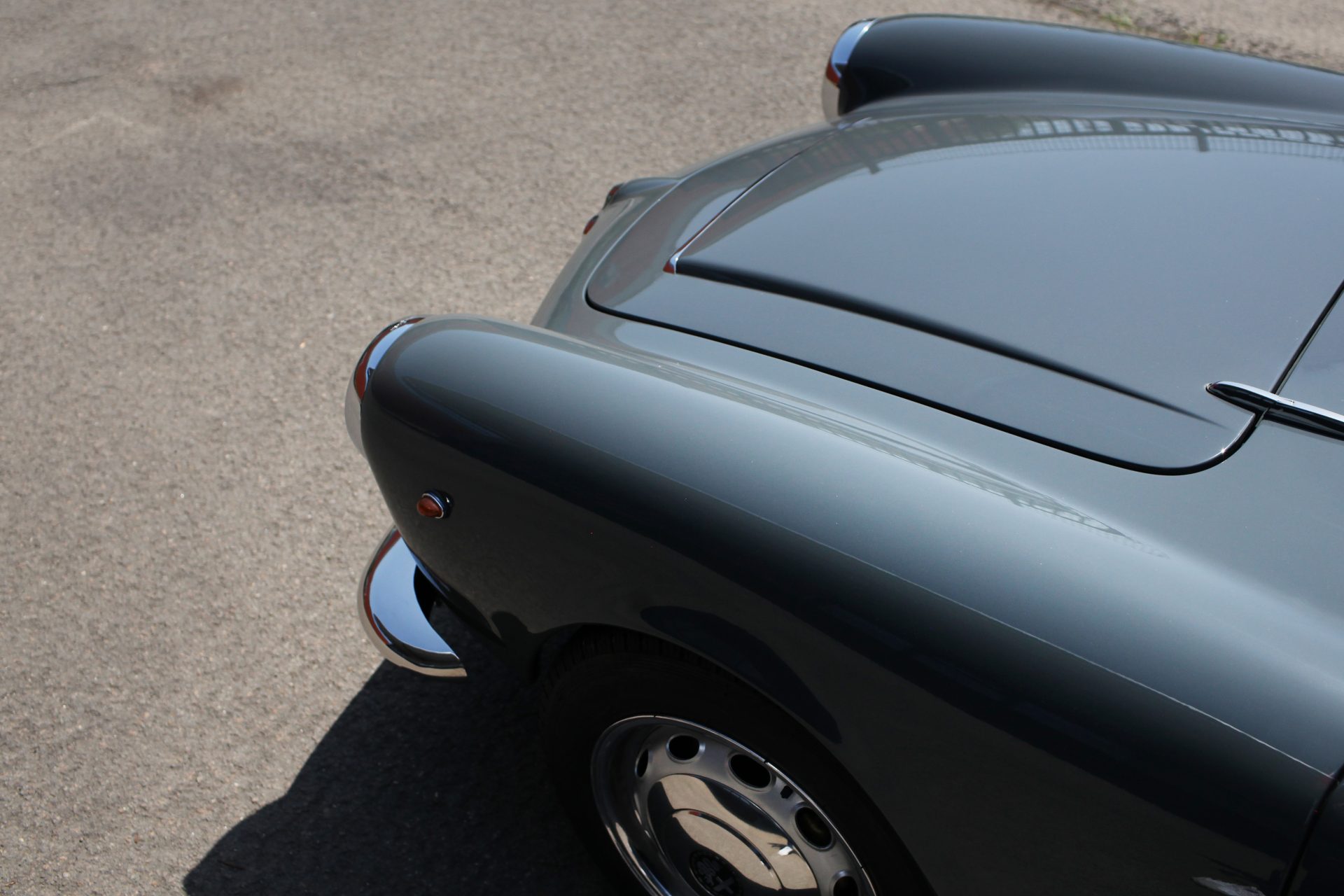 A five-speed gearbox was standard on the Giulia Spider, which remained in production until 1966. Towards the end of production the up-rated Spider Veloce was introduced, and this came with the Sprint Speciale’s 129bhp engine included, which made it the most rapid of the mainstream production Giulias. The Giulia Spider is definitely one of the most striking Alfa Romeos of its day and remains celebrated to this day, especially in its ultimate Veloce specification. 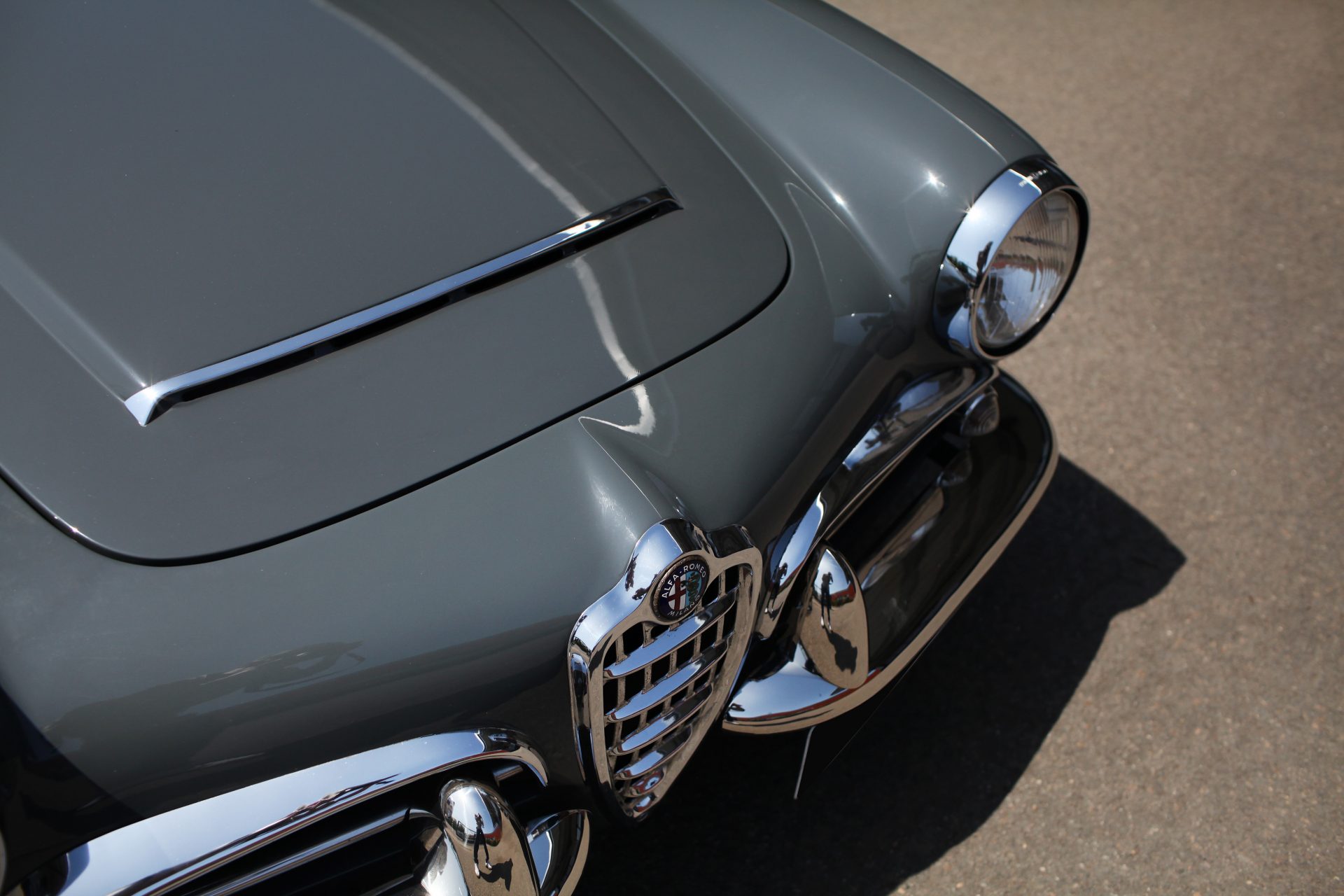 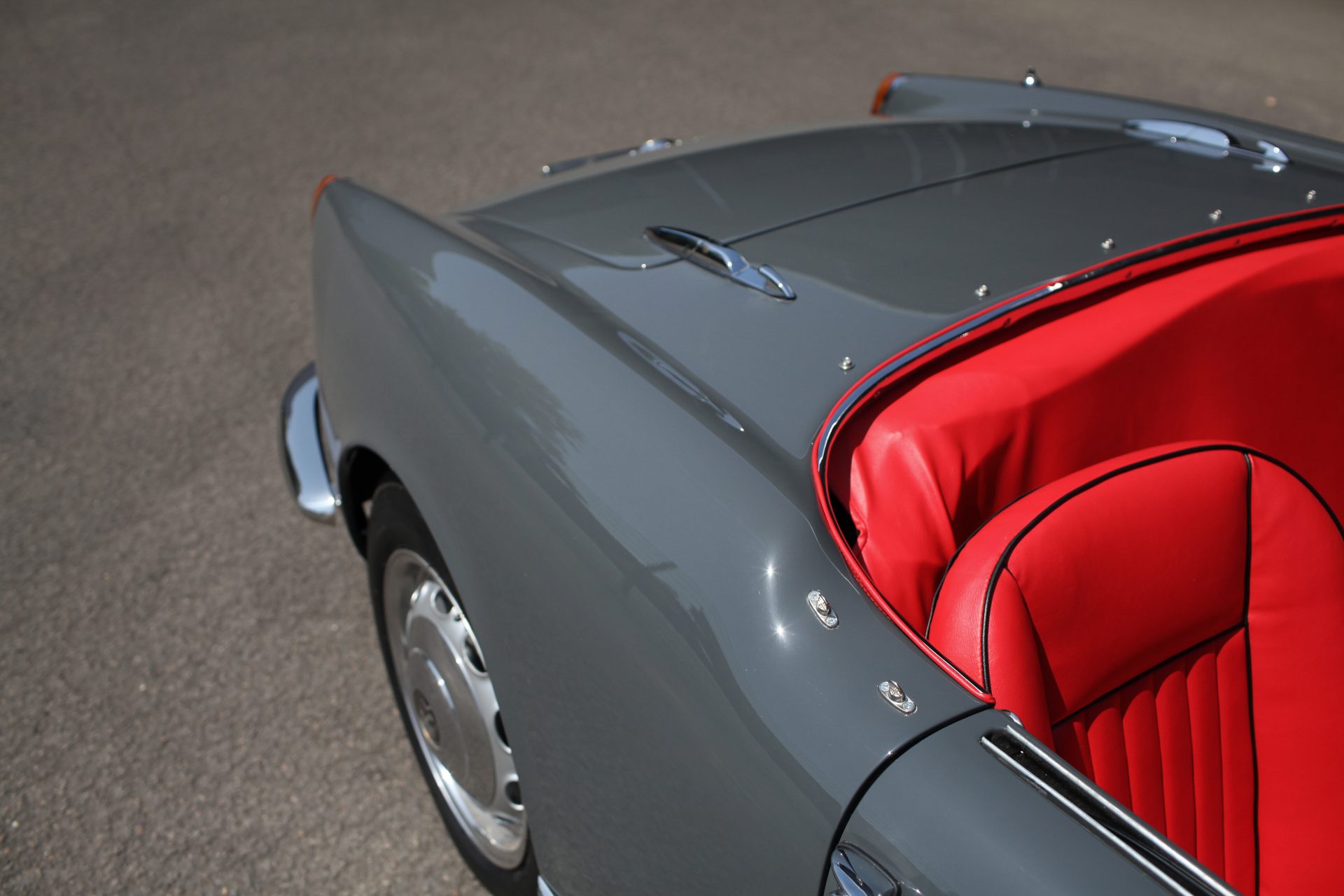 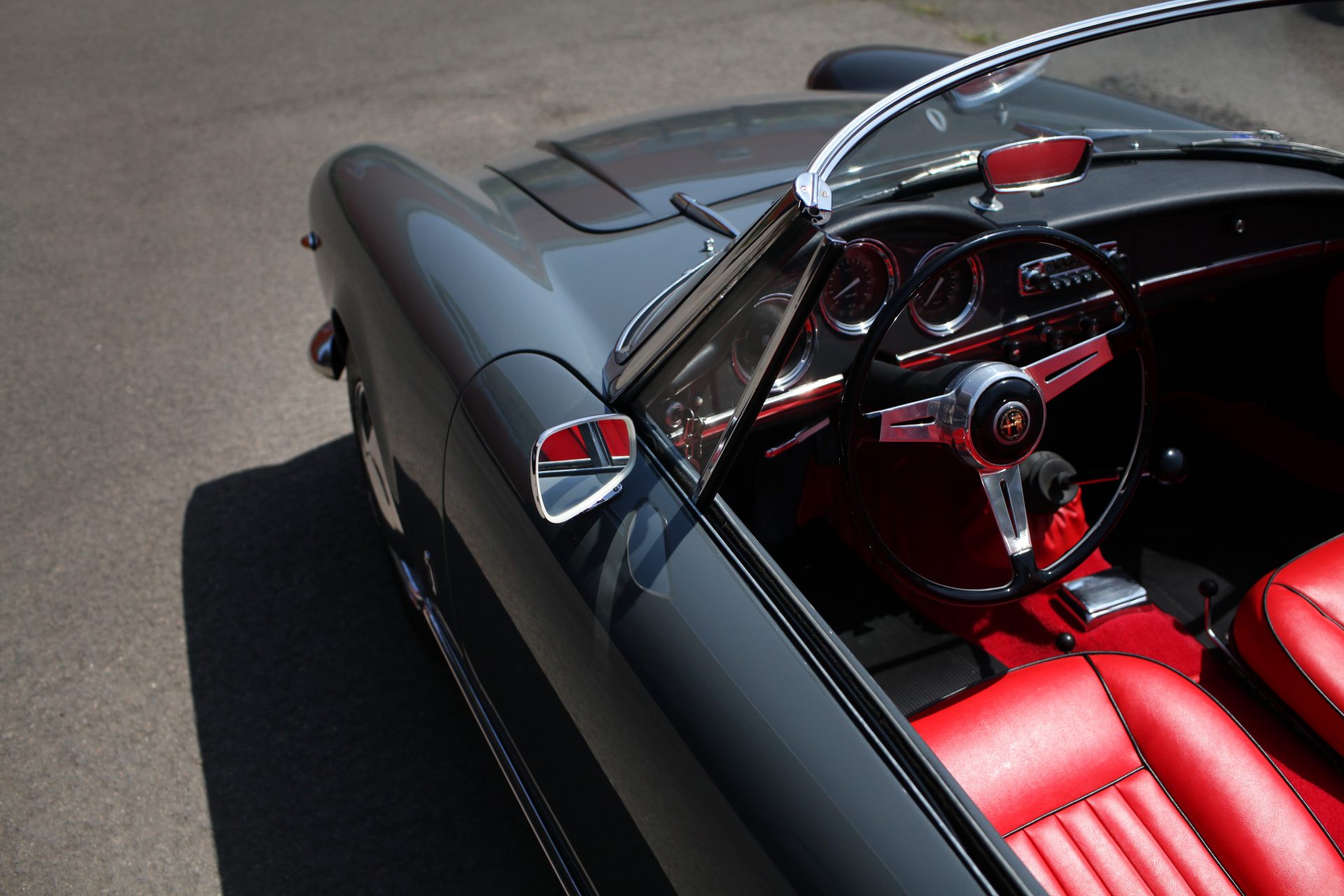 Originally finished in a breathtaking Grigio Grafite with red interior – a colour combination which the car still retains today -, this Alfa Romeo Giulia Spider 1600 Veloce from Auxietre & Schmidt benefits from the uprated front disc brakes from new. During the early 90s it was exported to Italy and bought by a local collector called Marco Nivolo from Torino, who had the car registered with ‘TO30909W’ plates. By June 1997 the car was sold to another collector, Giovani Tissara of Torino, who kept the car for nearly 10 years. At this stage the car underwent a restoration to exacting original standards.

By March 2006 Gianfranco Milani from Milan had purchased the car and then sold it a year later to a lady, Hella Van der Heuvel, also from Milan. Six years after this, the car was bought by a dealer from northern Italy specialised in vintage Alfa Romeo, who performed a service on the car before selling it to its current owner. It comes with its books, original tool roll, ASI gold plate and finished to exact original standards, this example is definitely one of the most sought after Alfa Romeo of its time. 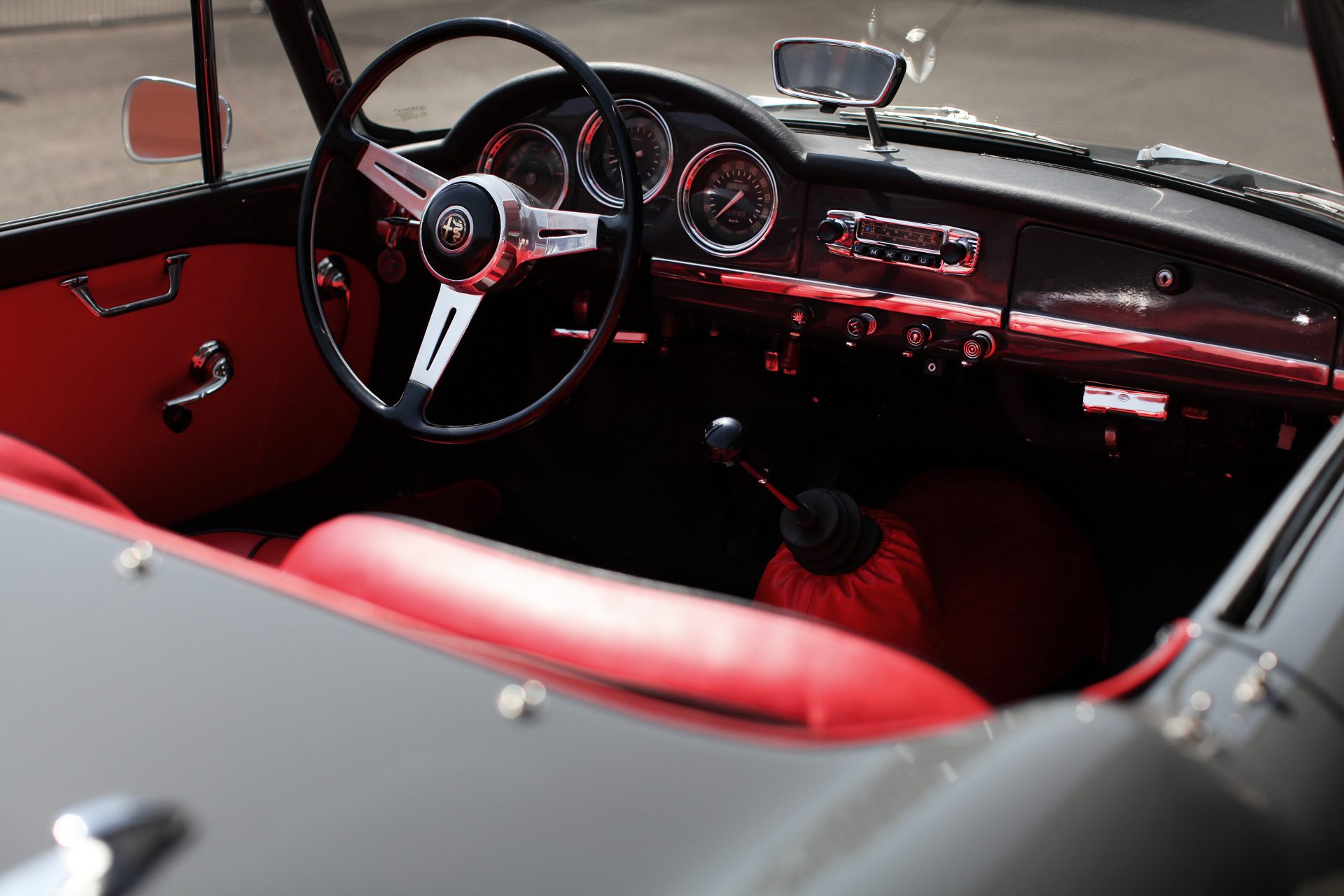 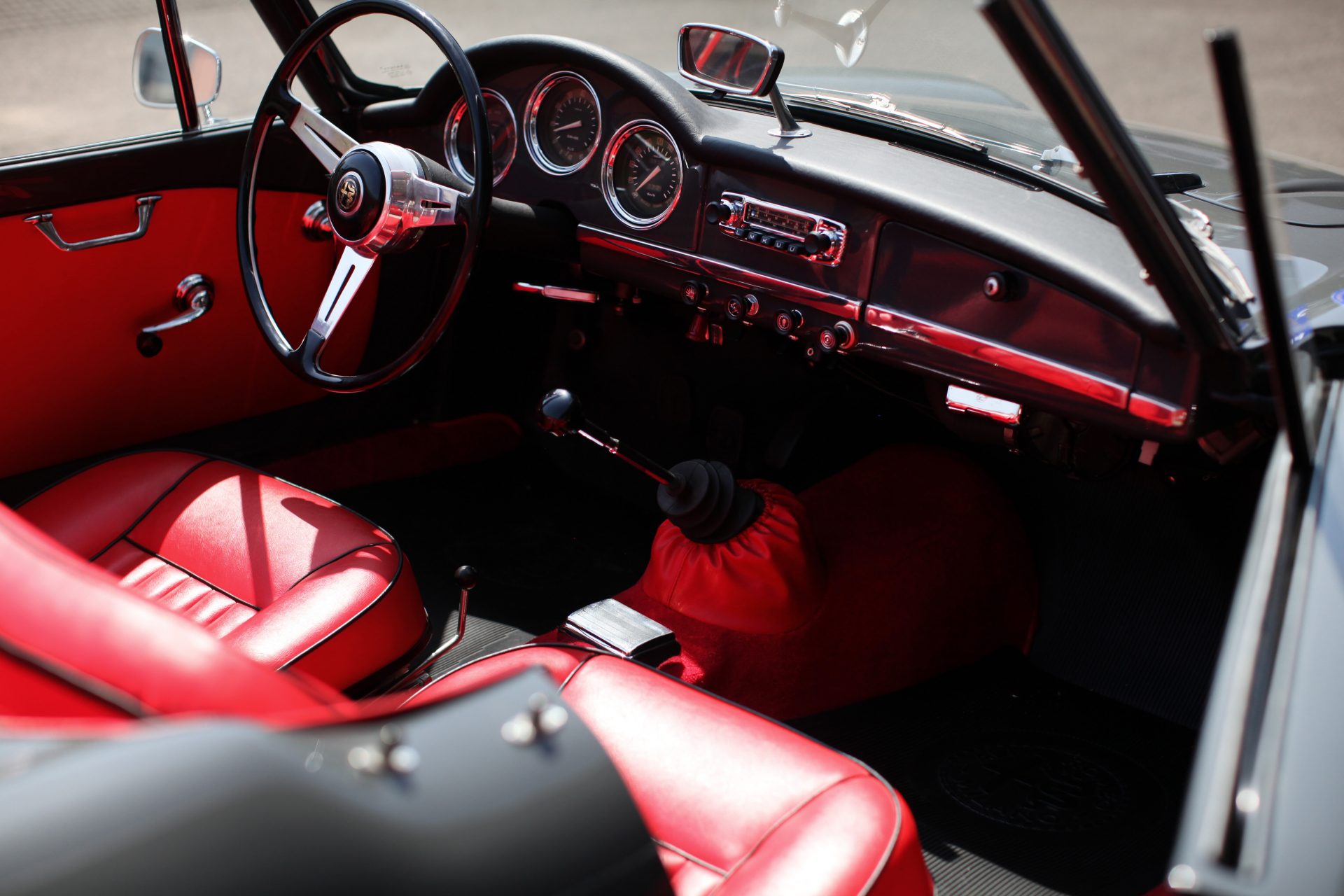 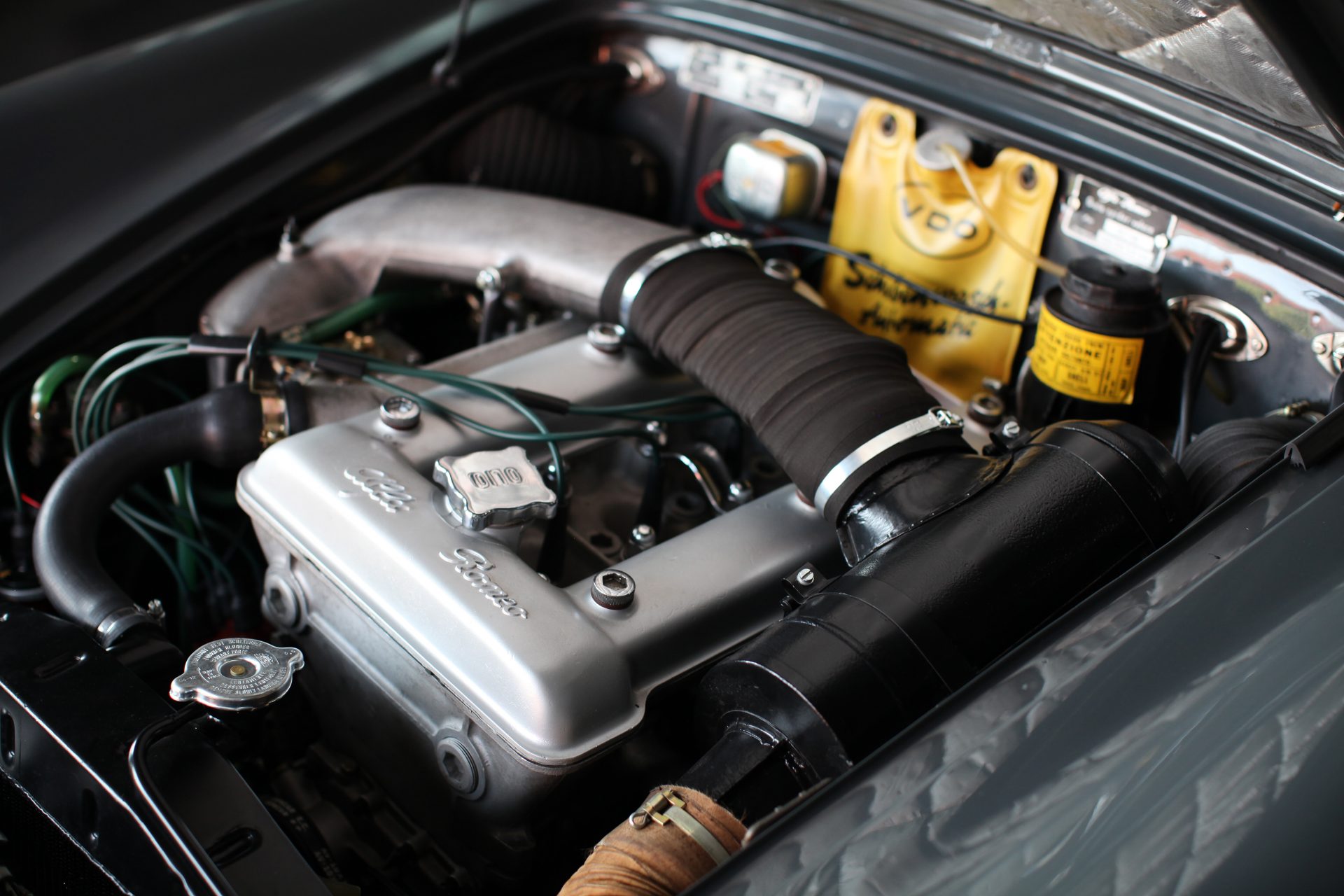 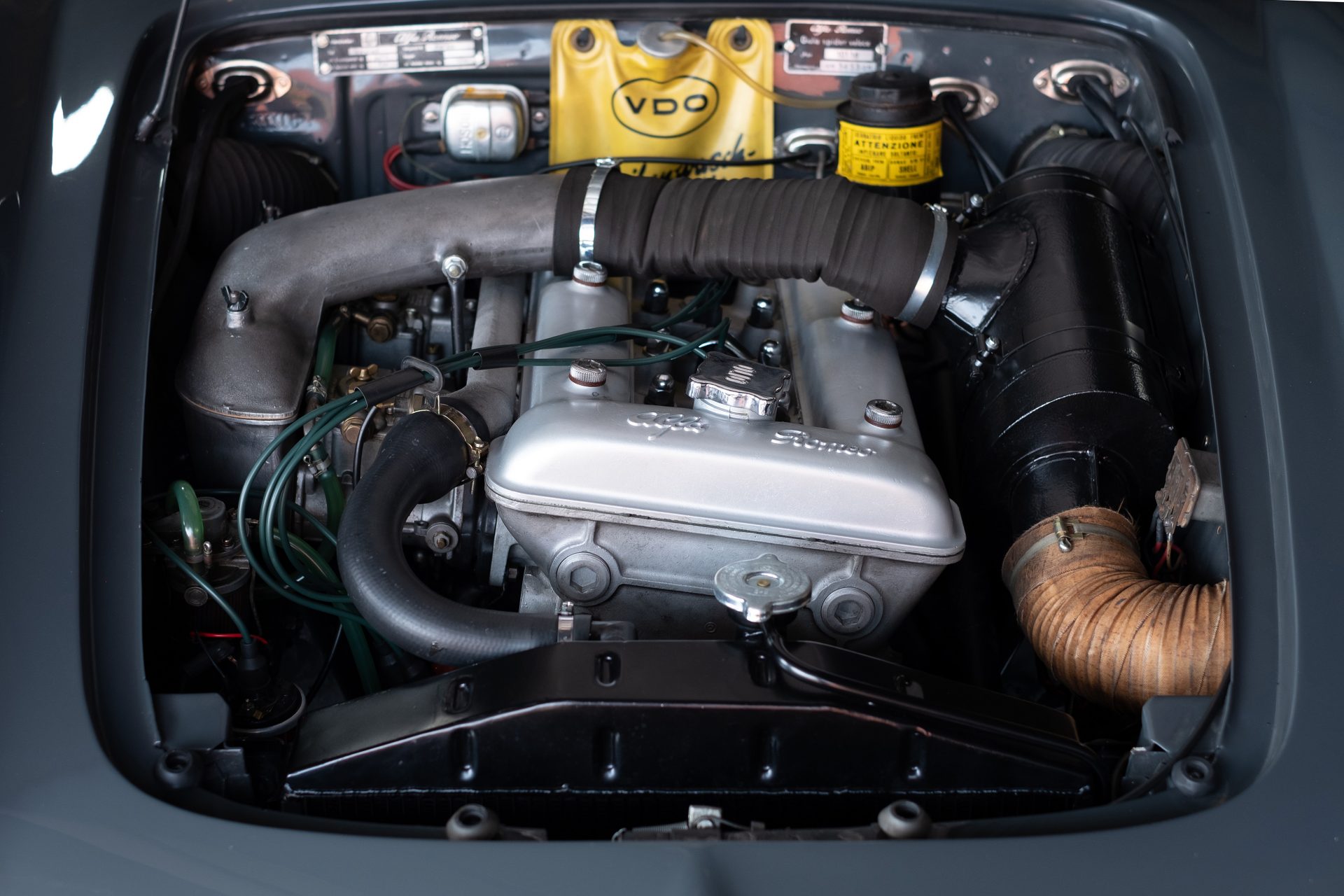 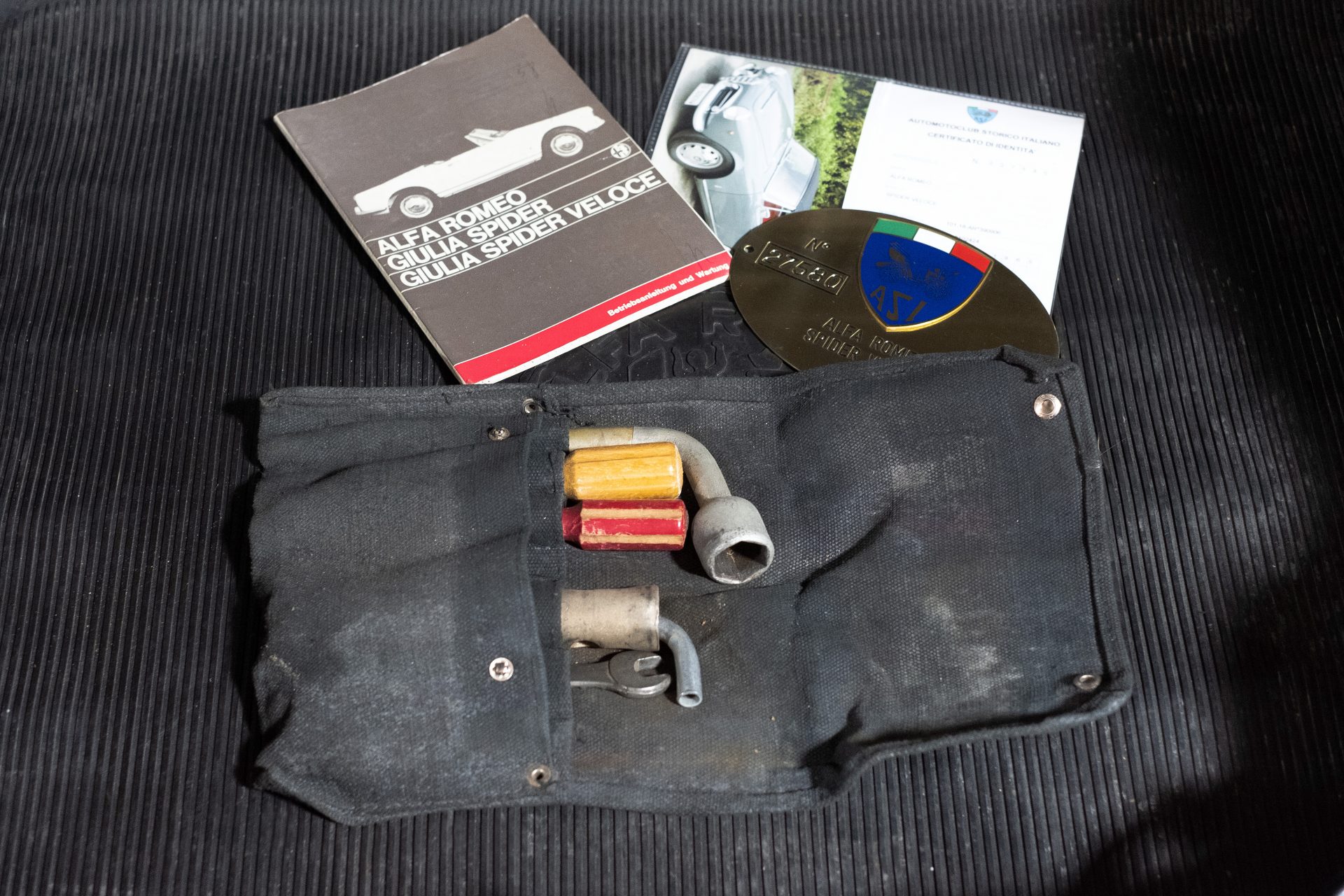 Auxietre & Schmidt are specialist in offering some of the finest looking classic cars we’ve seen here at Coolector HQ and this Alfa Romeo Giulia Spider 1600 Veloce is one of the most stunning to date – hence the punchy price tag of some €145k. If, however, you’ve got deep pockets and a particular penchant for vintage, 60s Alfa Romeos then you’ll be hard pressed to find one in such remarkable condition as this.

Written By
Leo Davie
More from Leo Davie
When looking to enjoy some amazing classic cars which, if you’re anything...
Read More