Though we don’t have much space going spare here at Coolector HQ, every now and then you’ll come across some artwork which is simply too good to be ignored even if it’s much larger than something we could accommodate. One such example of this is the, frankly astounding, Ben Young Broken Liquid Sculptures which are inspired by the waves and are amongst the most mesmerising pieces of art we’ve encountered to date. 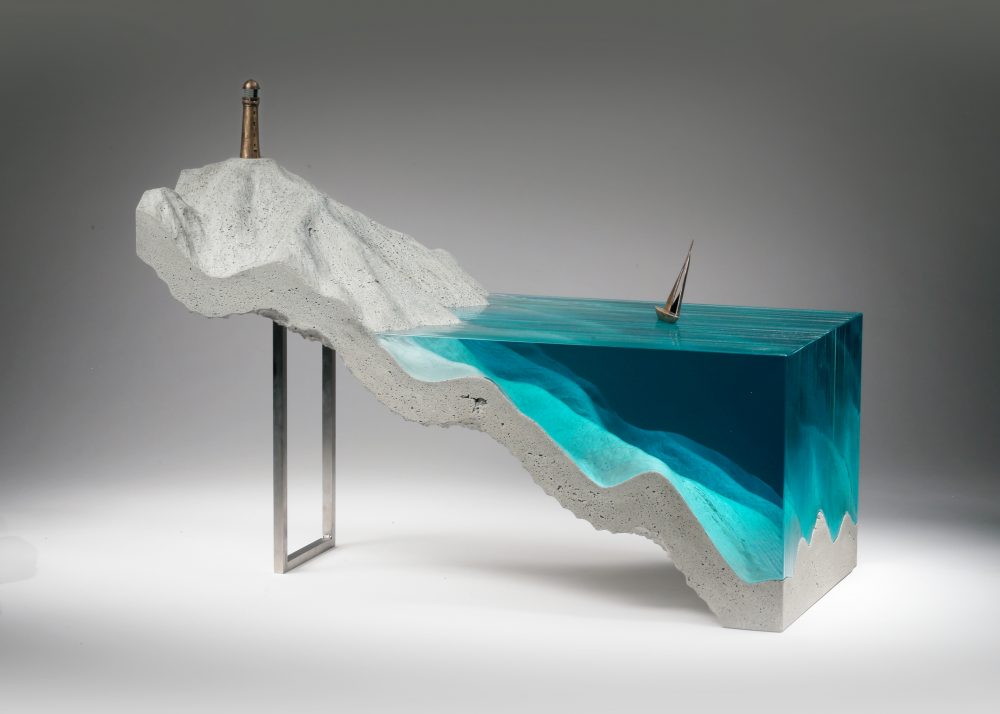 The Ben Young Broken Liquid Sculptures are so immeasurably popular that they don’t hang around on the shelves for long and are snapped up almost as quickly as the immensely talented sculptor can create them. Ben Young is currently residing in Mount Maunganui, New Zealand, and he is a self-taught artist who has been making glass sculpture for some 15 years and has exhibited alongside well-known glass artists both internationally and in Australia.

Inspired from exploring the local landscape and surroundings, Ben Young is a keen surfer and a boat builder by profession, and he has been heavily influenced by the ocean and brings these passions together in his evocative glass forms in the shape of these astounding Broken Liquid Sculptures. Each one is hand drawn, hand cut and handcrafted from clear sheet float glass, before being laminated layer upon layer to create the final form and needless to say, this is a time consuming process but worth it when you see the finished products. 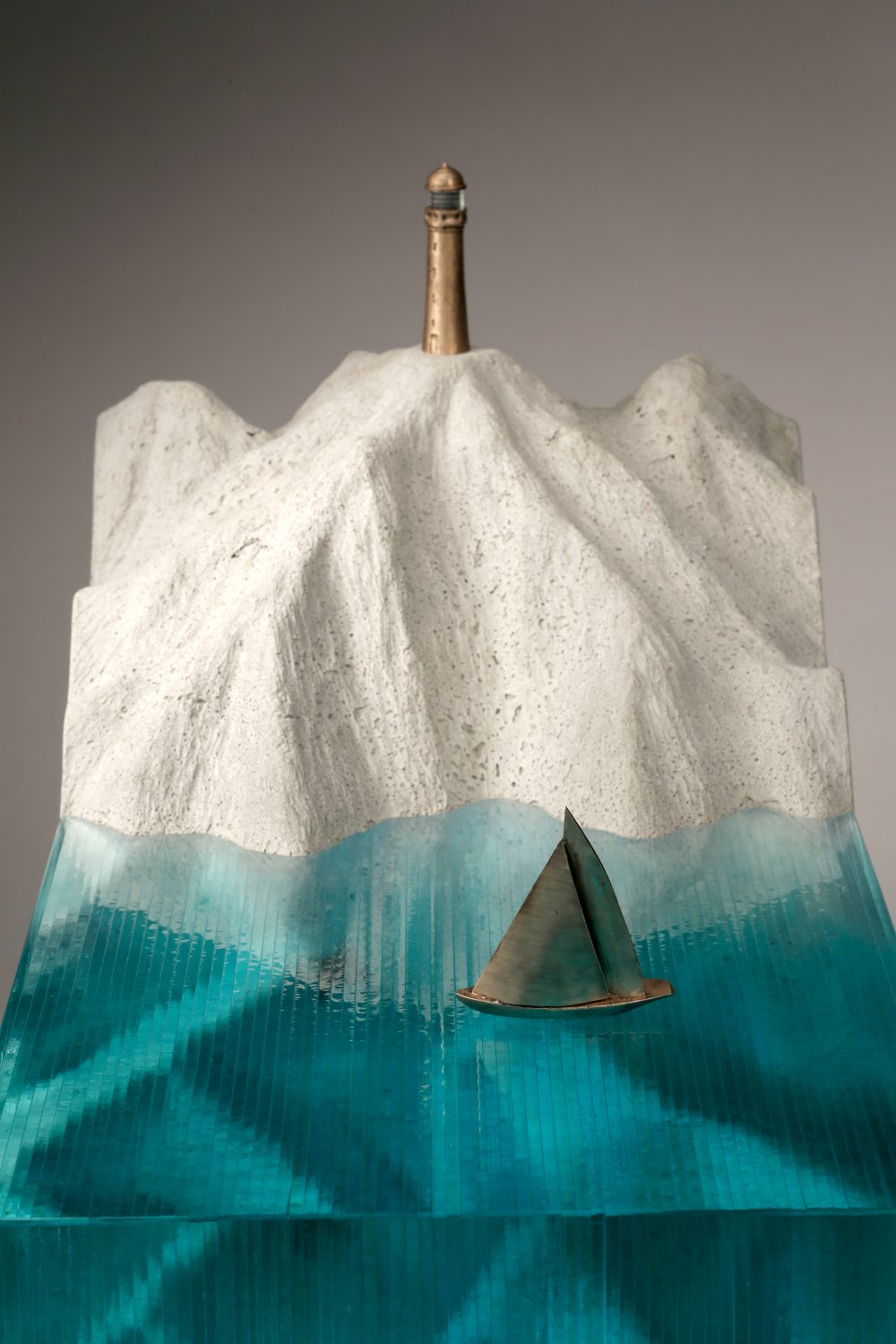 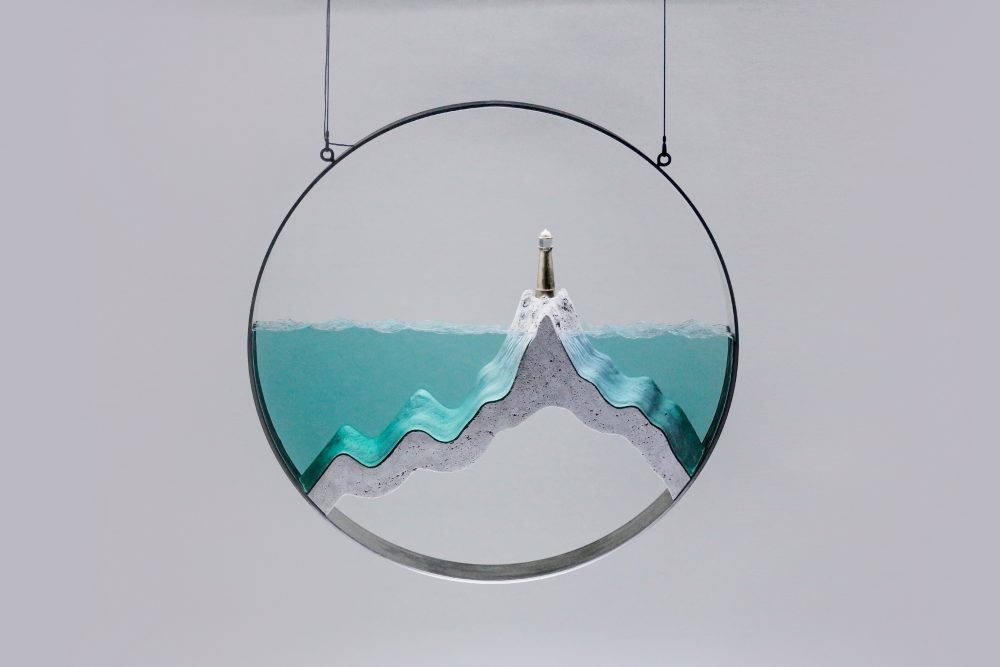 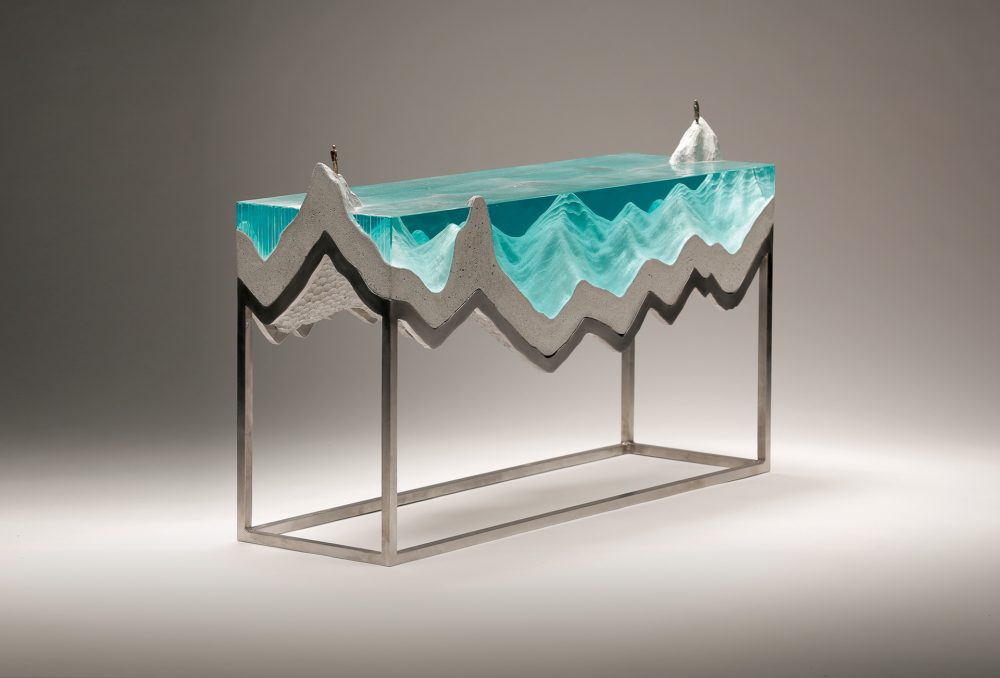 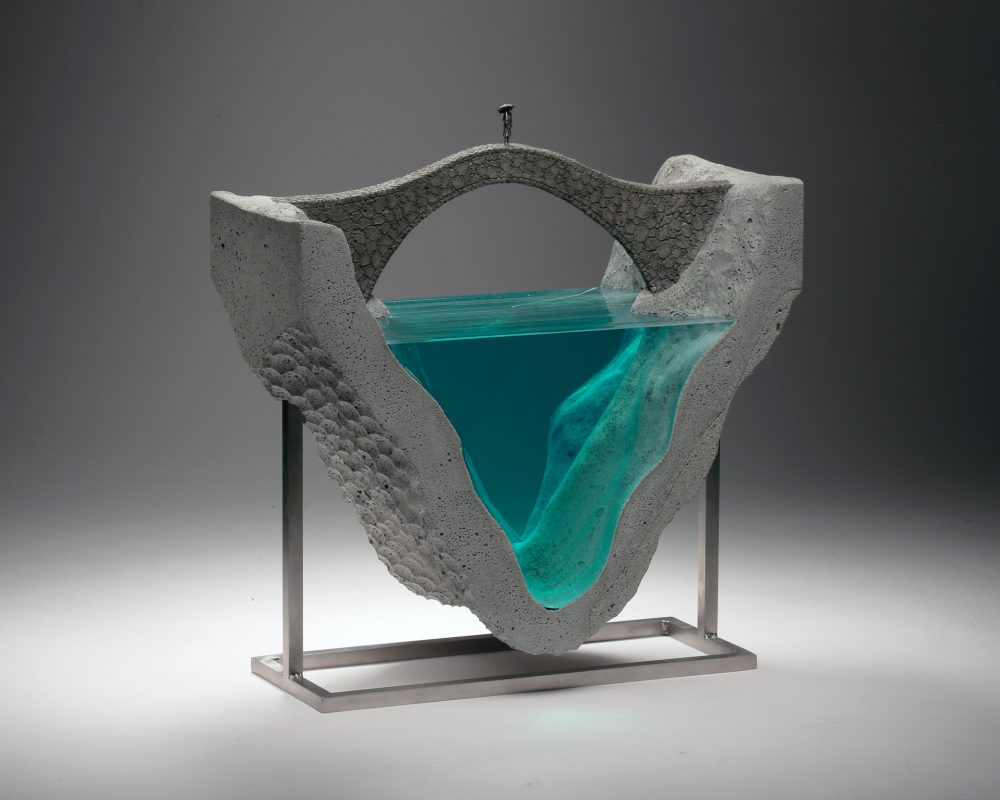 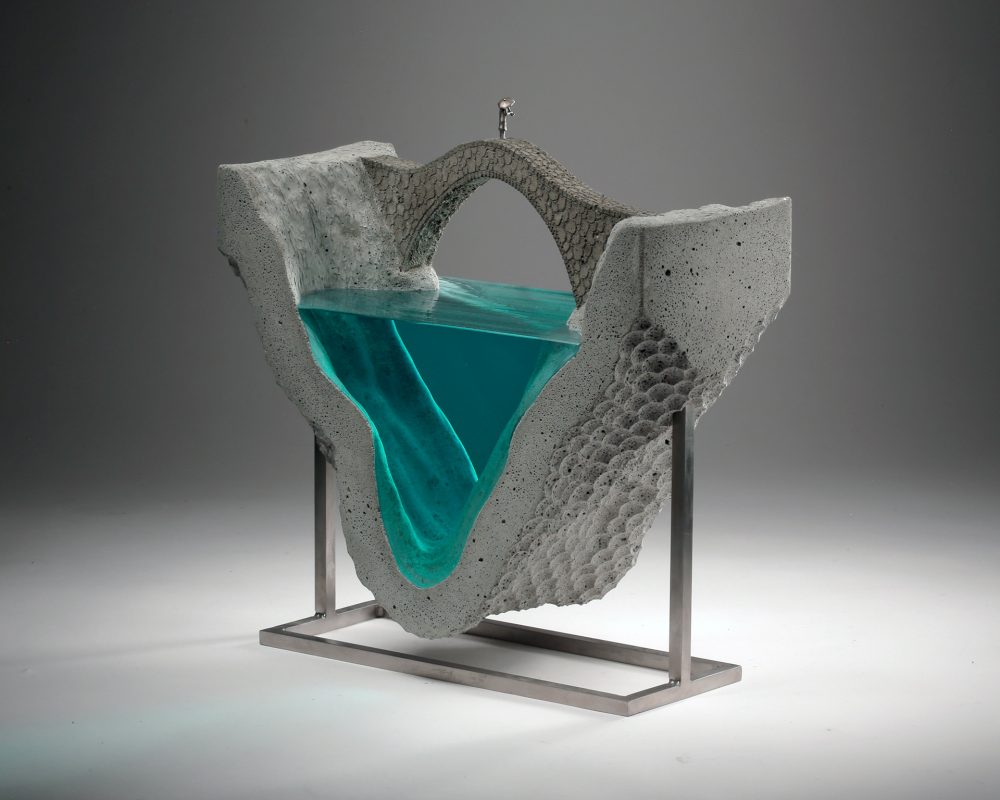 With the Broken Liquid Sculptures, Ben Young constructs models, draws templates, makes custom jigs and then cuts the layers with a glazier’s hand-tool. The considerable complexity comes from the planning phase, where he says ‘I do a lot of thinking before I even start to draw or cut’. He then sketches the concept by hand and creates a plan through the use of traditional technical drawing techniques. He works with 2D shapes and have to figure out how to translate that into a 3D finished piece and the immensely eye-catching finished products really do need to be seen to be believed. 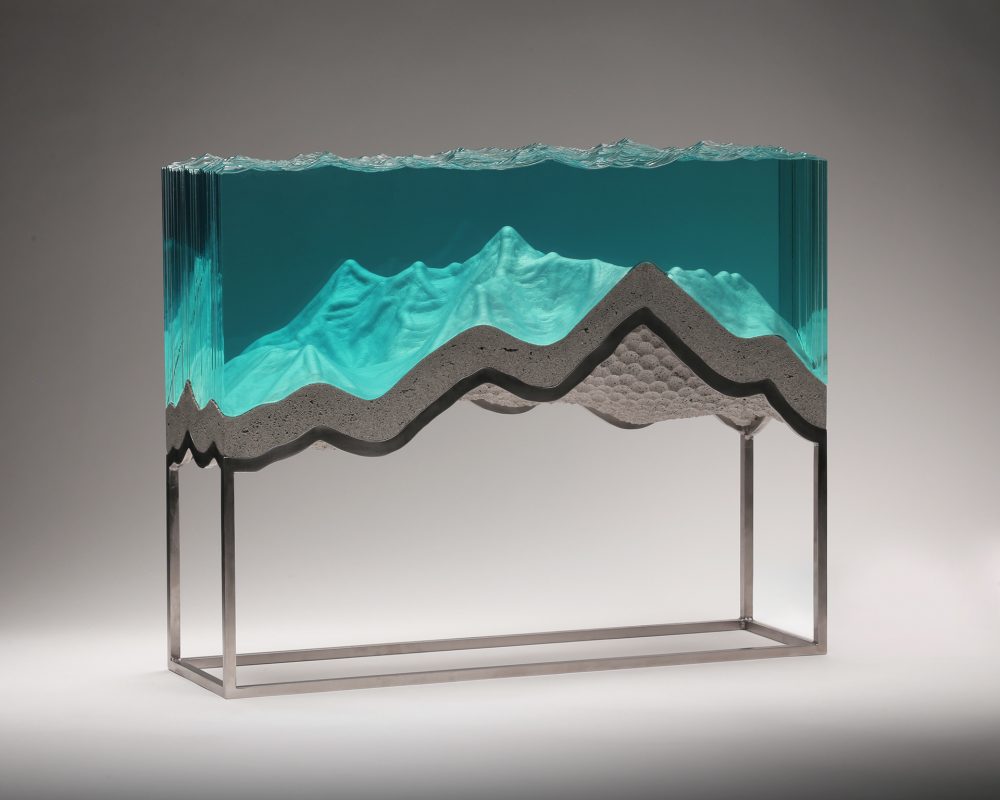 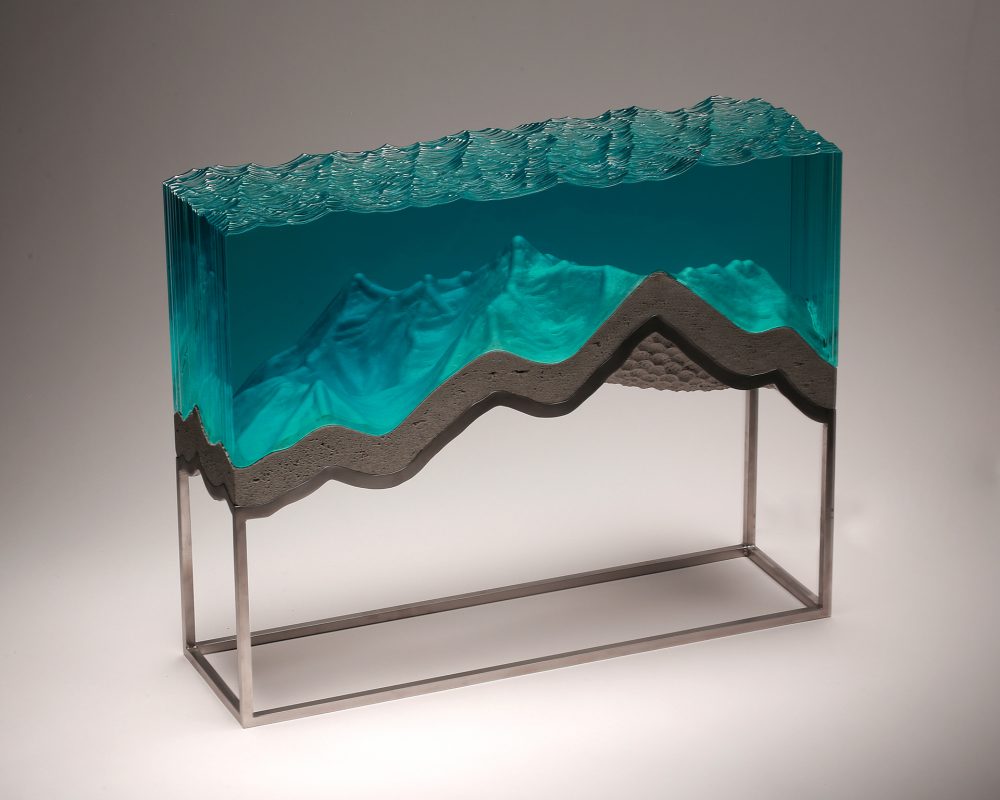 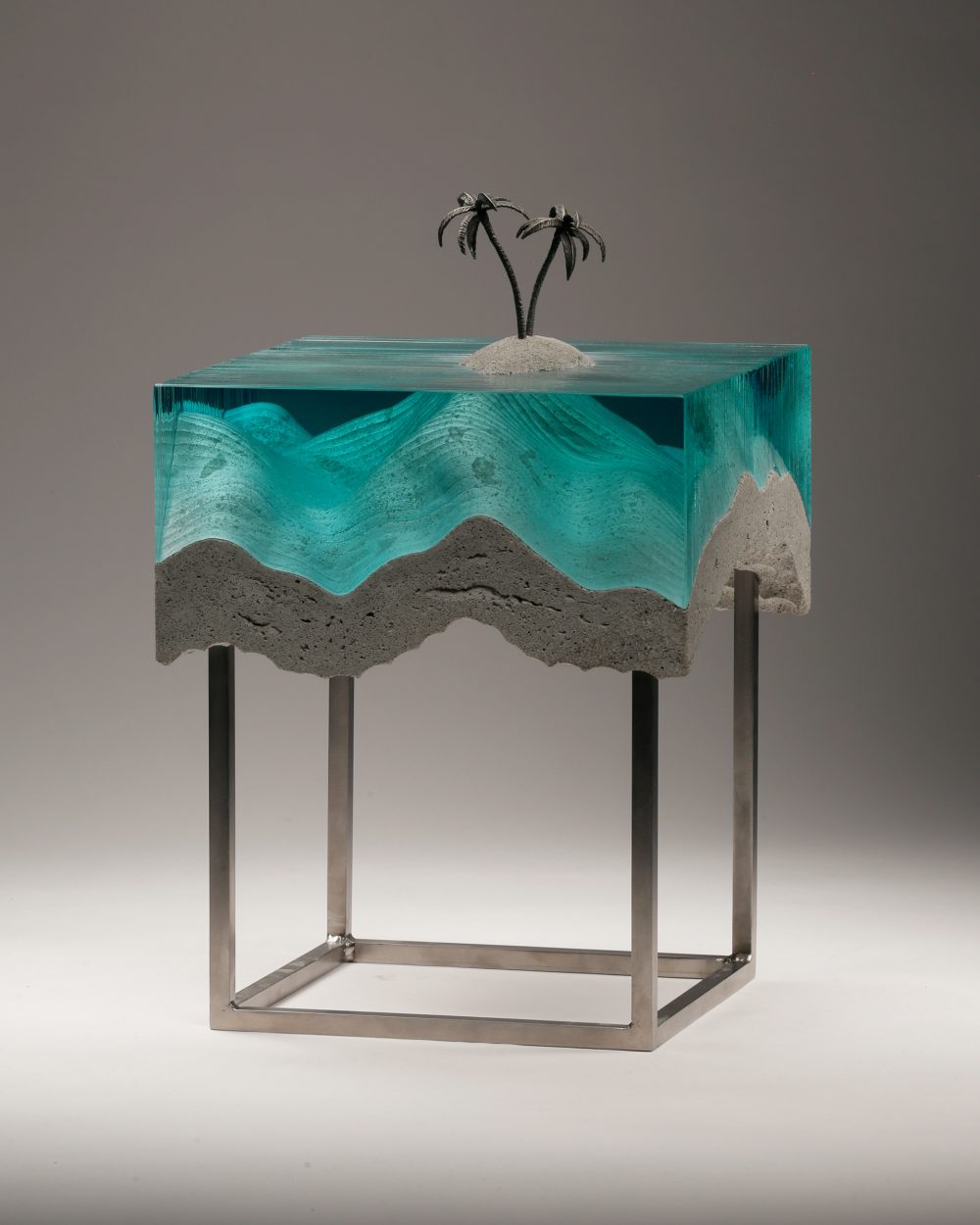 All the sensational Broken Liquid Sculptures from Ben Young explore the use of industrial materials to compliment the organic glass shapes that form the basis of his designs. He likes the idea that concrete is a basic construction material, and also the physical and visual contrasts between the textures and colours of both materials. Clearly influenced by the ocean and bodies of water – the concrete forms have become an essential part of his art forms as have the small bronze carvings which he sculpts initially from wax and uses to help portray the narrative suggested by his landscapes.

These creations from Ben Young are the sort of cornerstone pieces of artwork than underpin any art lover’s collection and though they are understandably pricey in nature, you are getting a one in a million creation that will turn heads wherever it goes. The phenomenal, aquatic inspired creations of Ben Young are some of our favourite sculptures to date here at Coolector HQ and it comes as no surprise to us whatsoever that they sell like hot cakes whenever they are released. 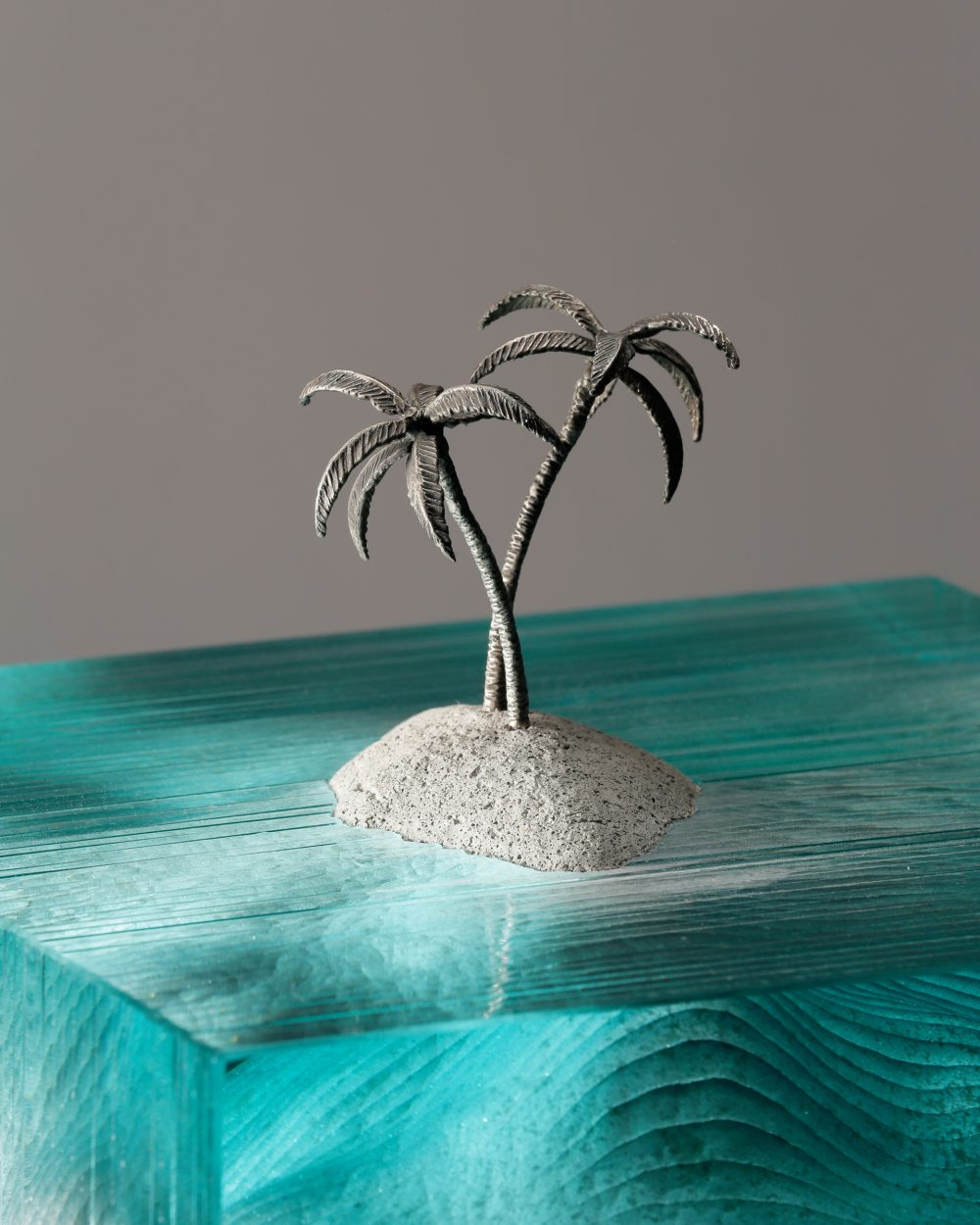 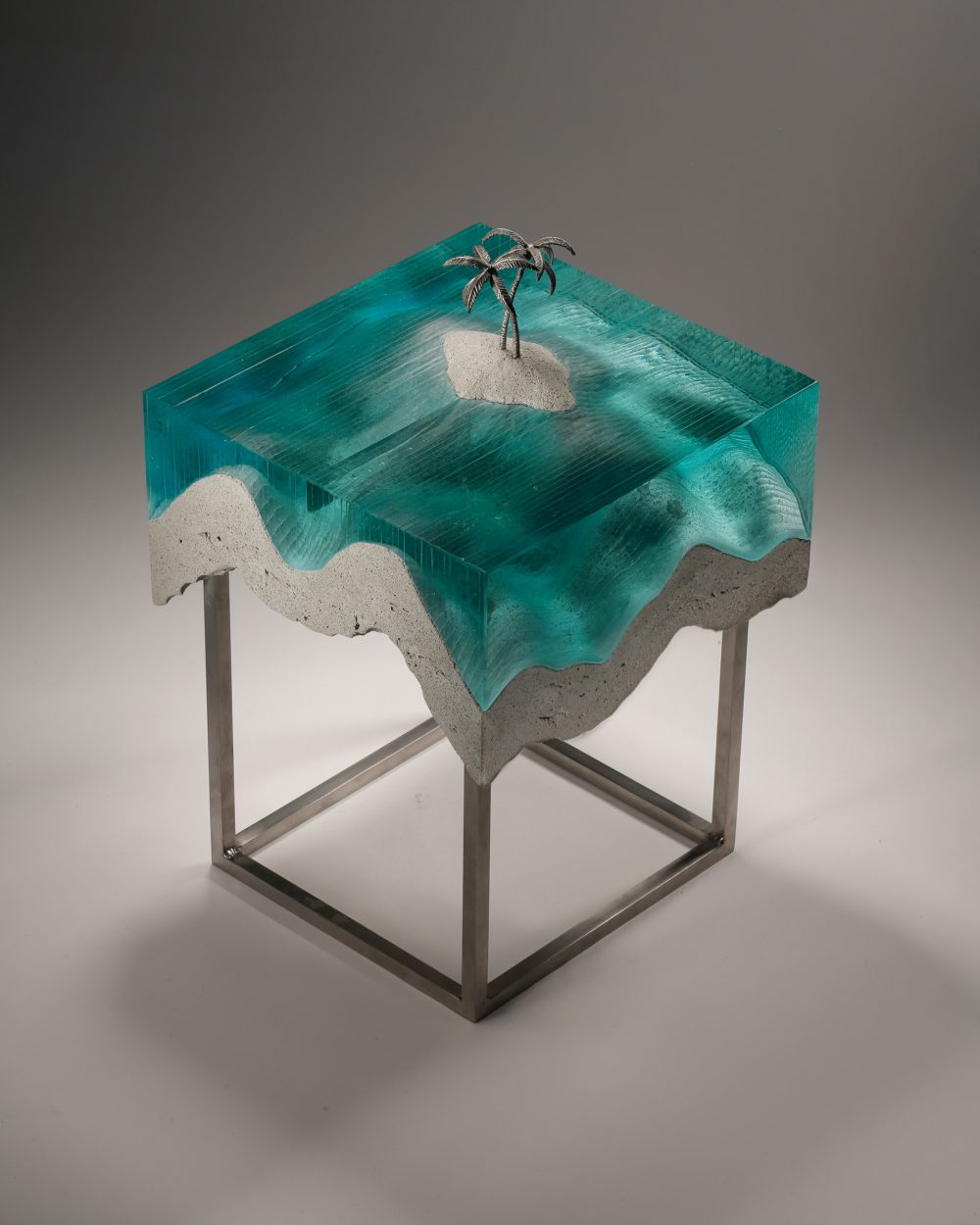 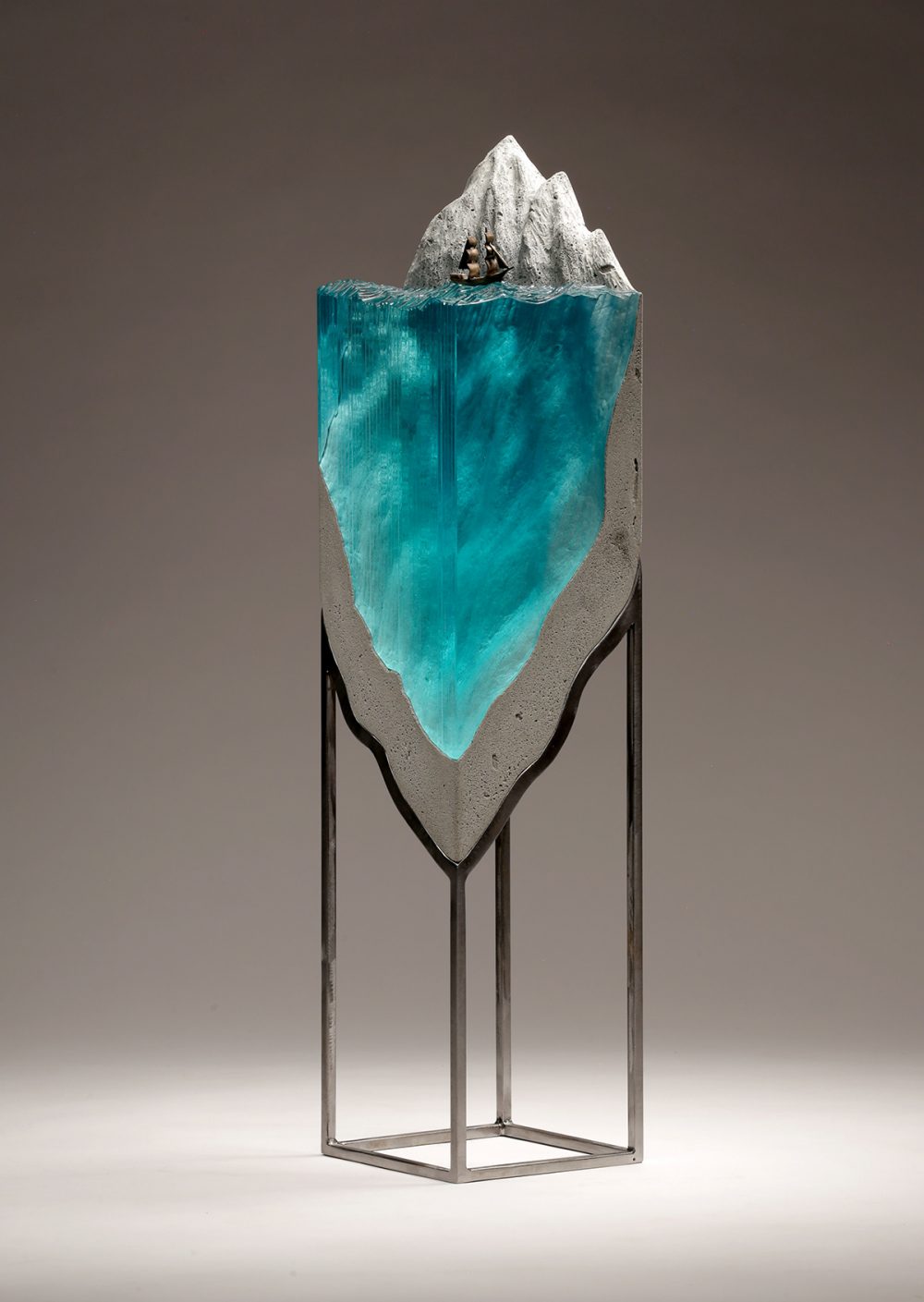 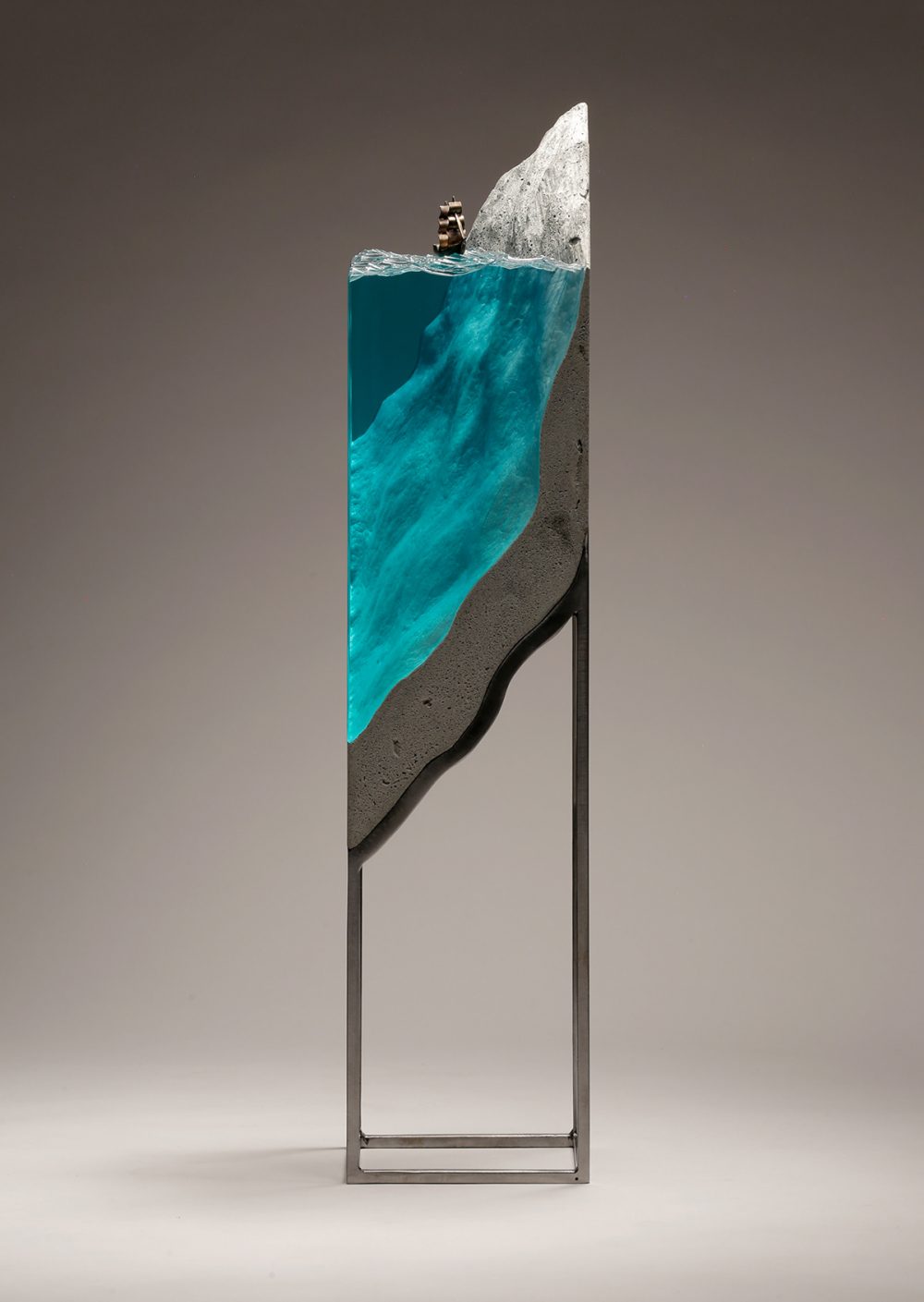 With artwork of this calibre, it really is impossible not to be impressed and we often find ourselves gravitating back to Ben Young’s site to see what new Broken Liquid Sculptures he has created and we never leave disappointed. Phenomenally detailed and painstakingly crafted, this exemplary creations are some of the finest pieces of sculpture you’re likely to come across anywhere out there.

Written By
Leo Davie
More from Leo Davie
Whilst you’d be well within your rights to think the IT House...
Read More