You know when a guest house is probably preferable to living in the main house that you’ve got a mighty impressive design on your hands and that’s exactly the situation we find ourselves in with the incredible looking, The Hive Guest House in Austin, Texas. Designed by Studio 512, this small but perfectly formed structure actually has more space than meets the eye and we’re loving the whimsical, fantasy style of the design here at Coolector HQ. 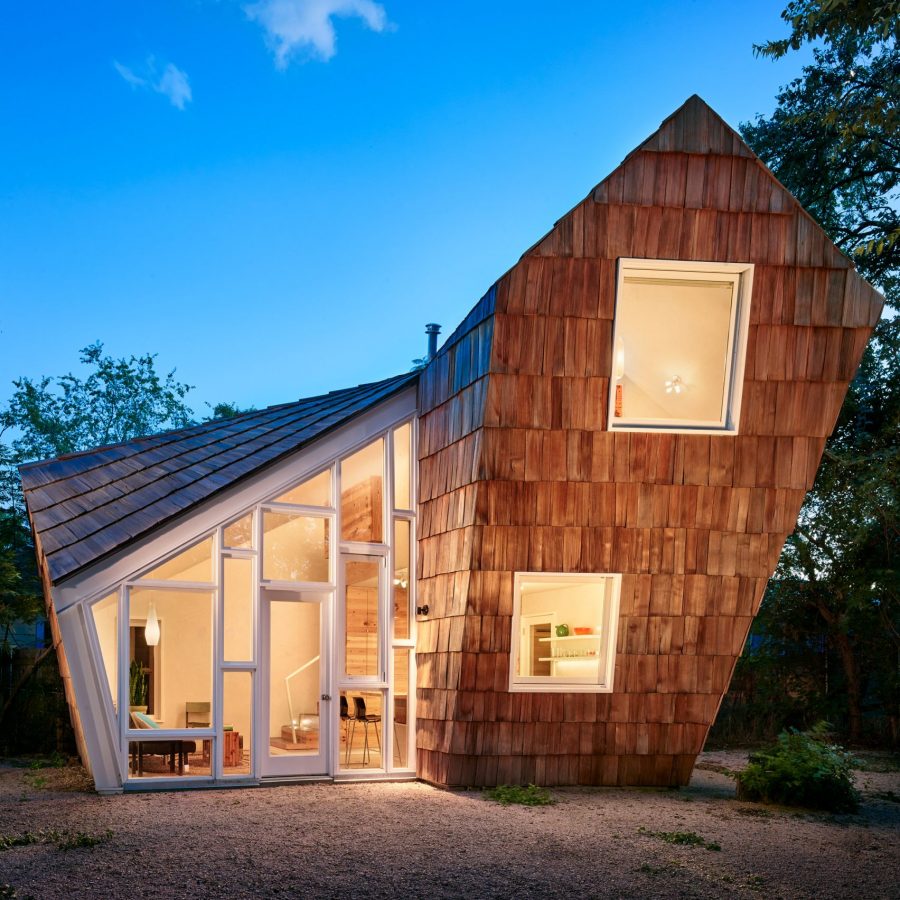 The Hive Guest House from Studio 512 is undoubtedly one of the most unique looking structures in Austin and it boasts angled walls which have been clad in oversized shingles for a highly striking visual impact. The are also a variety of interior spaces that narrow and widen based on how they are used to add a real sense of space to the interiors that you might not expect when viewing the property from the outside.

As you might have guessed from how the property has been designed, it has been created for a television and documentary film producer, and can be found behind a bungalow-style main residence in Austin, Texas. In total, The Hive has a footprint of some 550 square feet (51 square metres), the two-storey guest dwelling has a kitchen and living room on the ground floor, and a bedroom and office on the second floor. The eye-catching building was designed and built by Studio 512, which is a local architecture practice headed up by architect Nicole Blair. 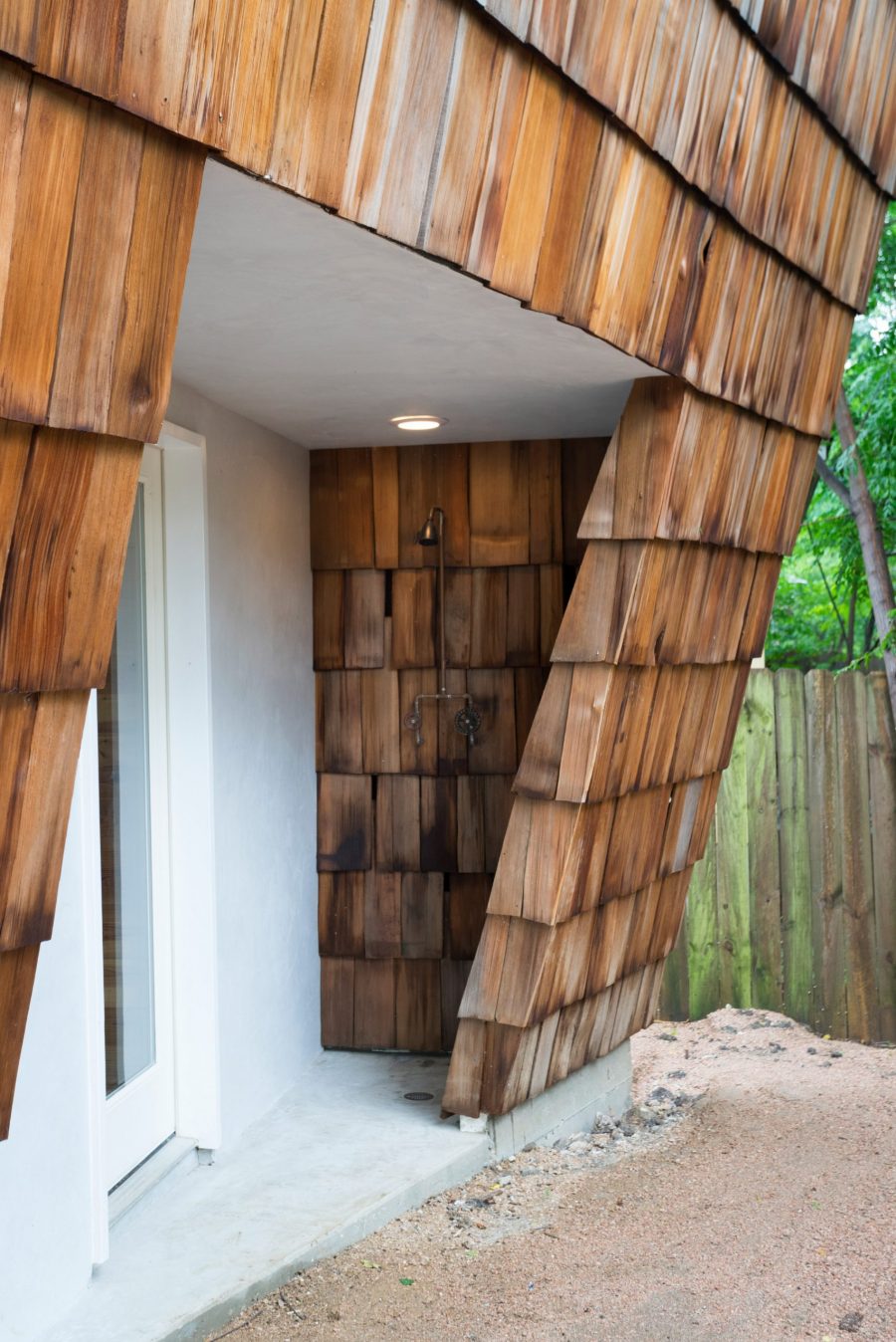 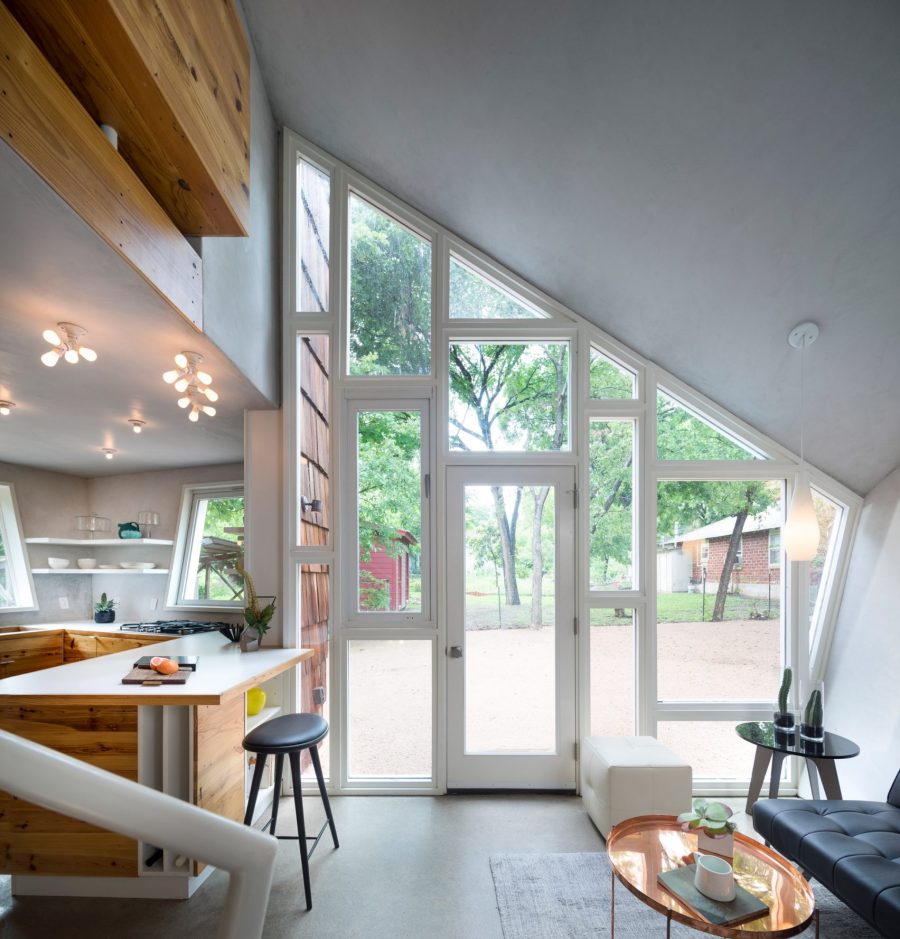 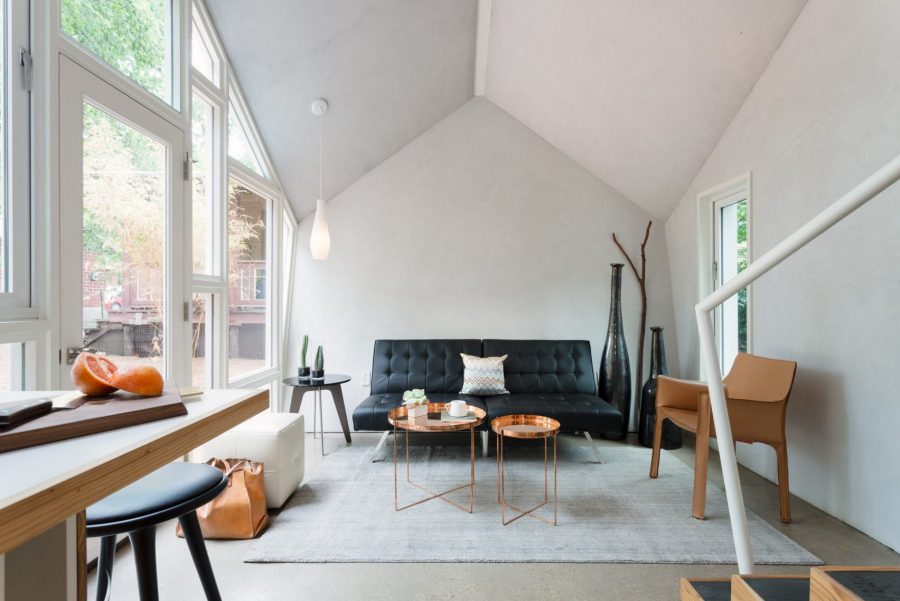 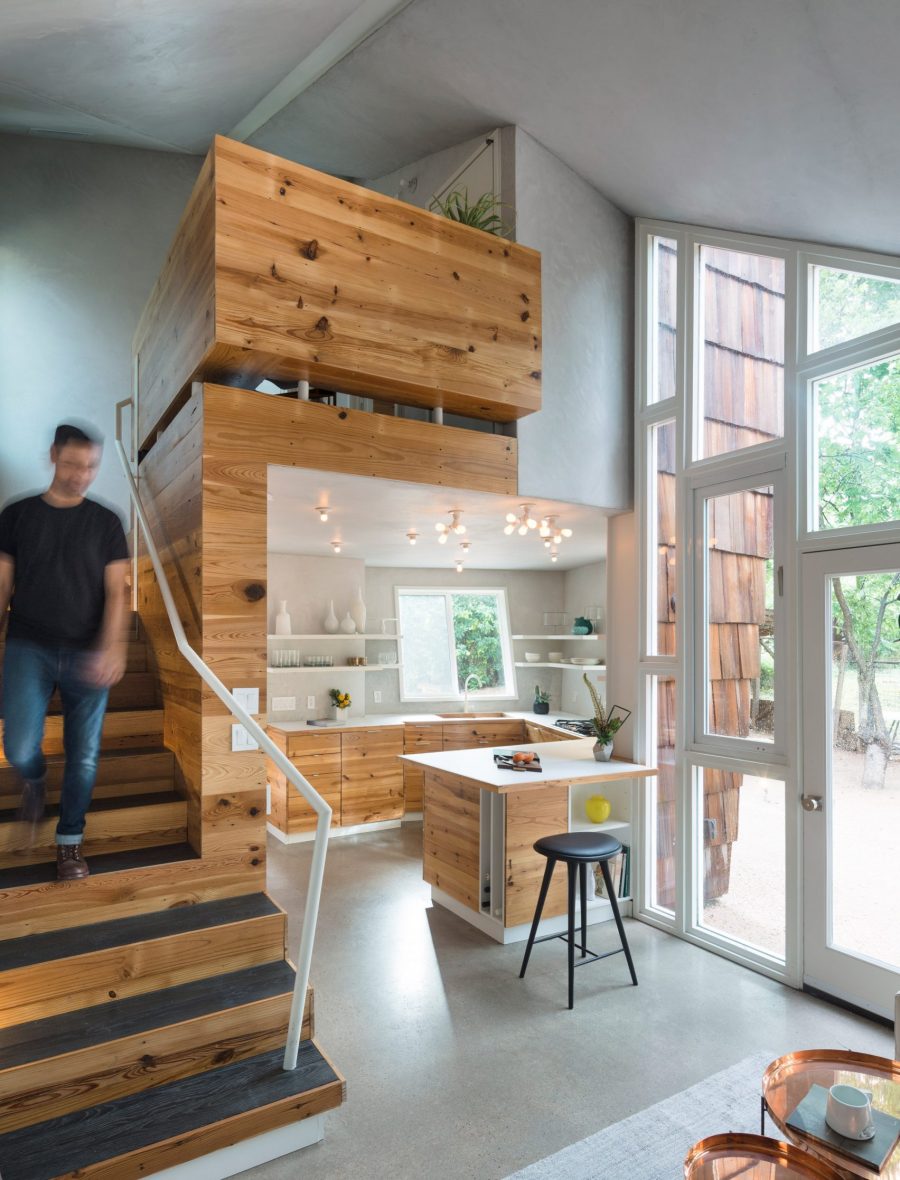 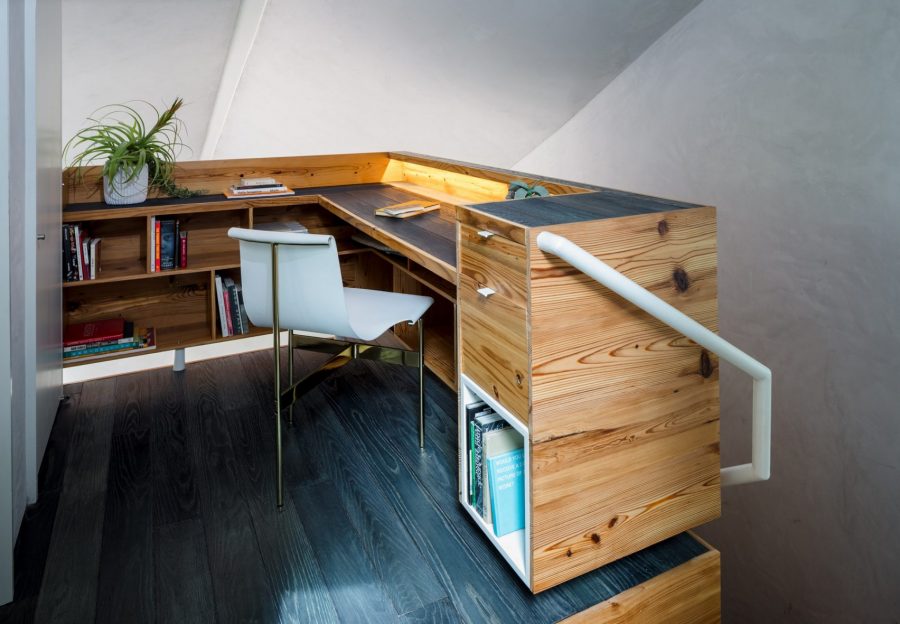 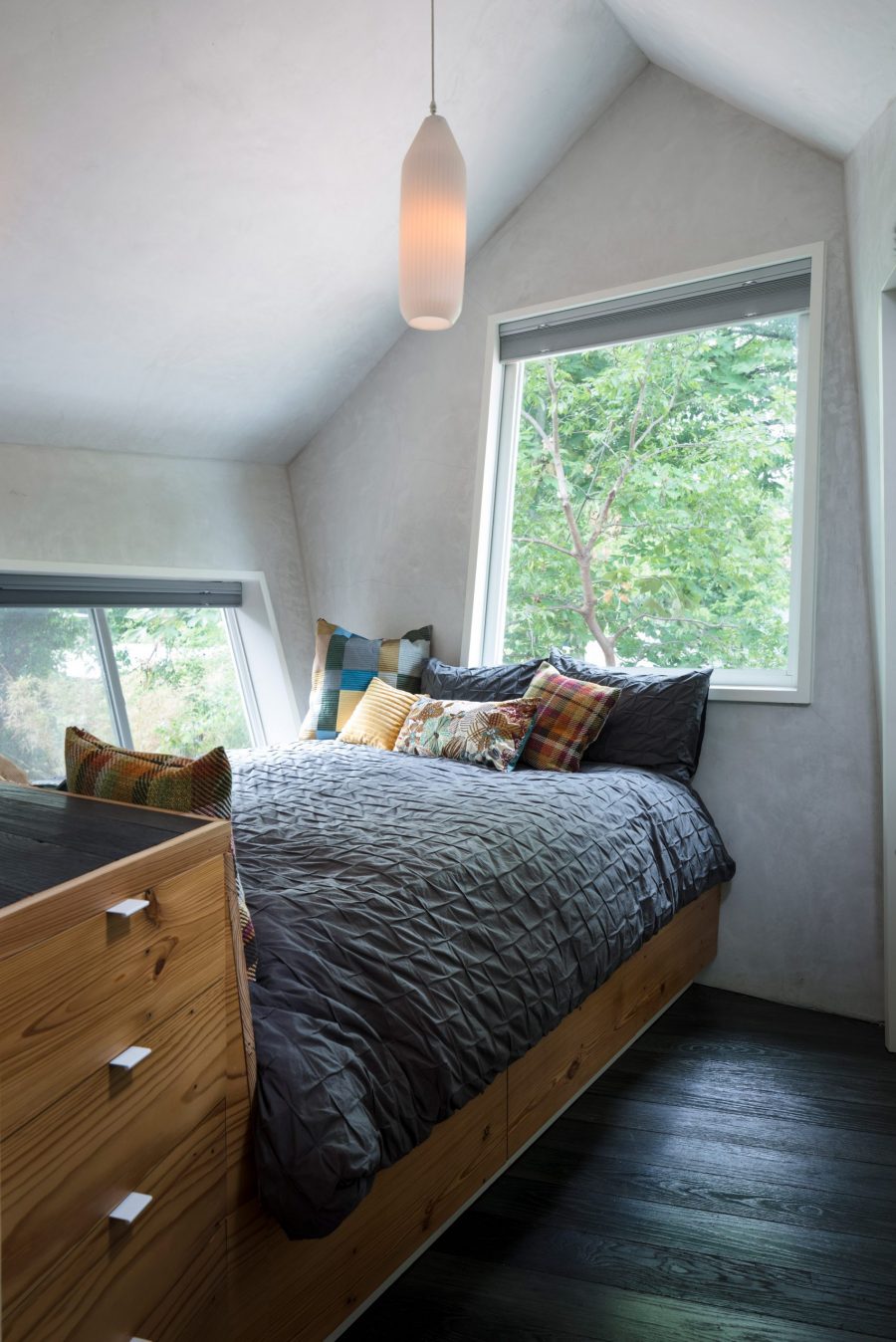 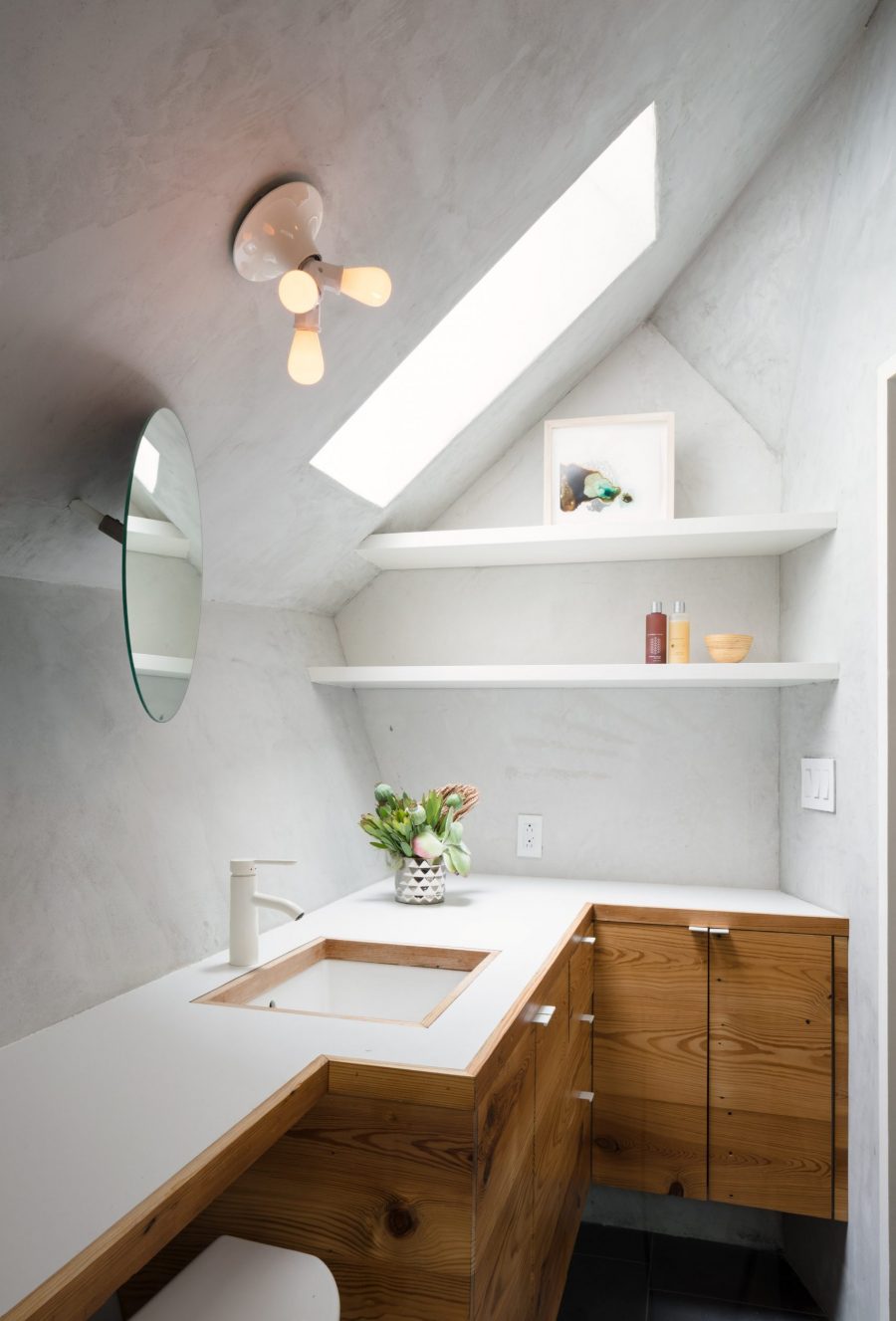 The Hive Guest House in Austin has a highly irregular shape which was conceived as an intriguing response to local design rules – namely, the fact that the city required that the footprint of this guest house be no larger than 320 square feet (30 square metres). To facilitate the creation of a larger dwelling, Studio 512 added a floor and incorporated walls that slant outward and thereby not counting as part of the building’s overall footprint. The Walls tilt from the slab, which hug the building setback planes and an angled utility easement at the rear of the structure, to add volume where needed and given the impression of a beehive. 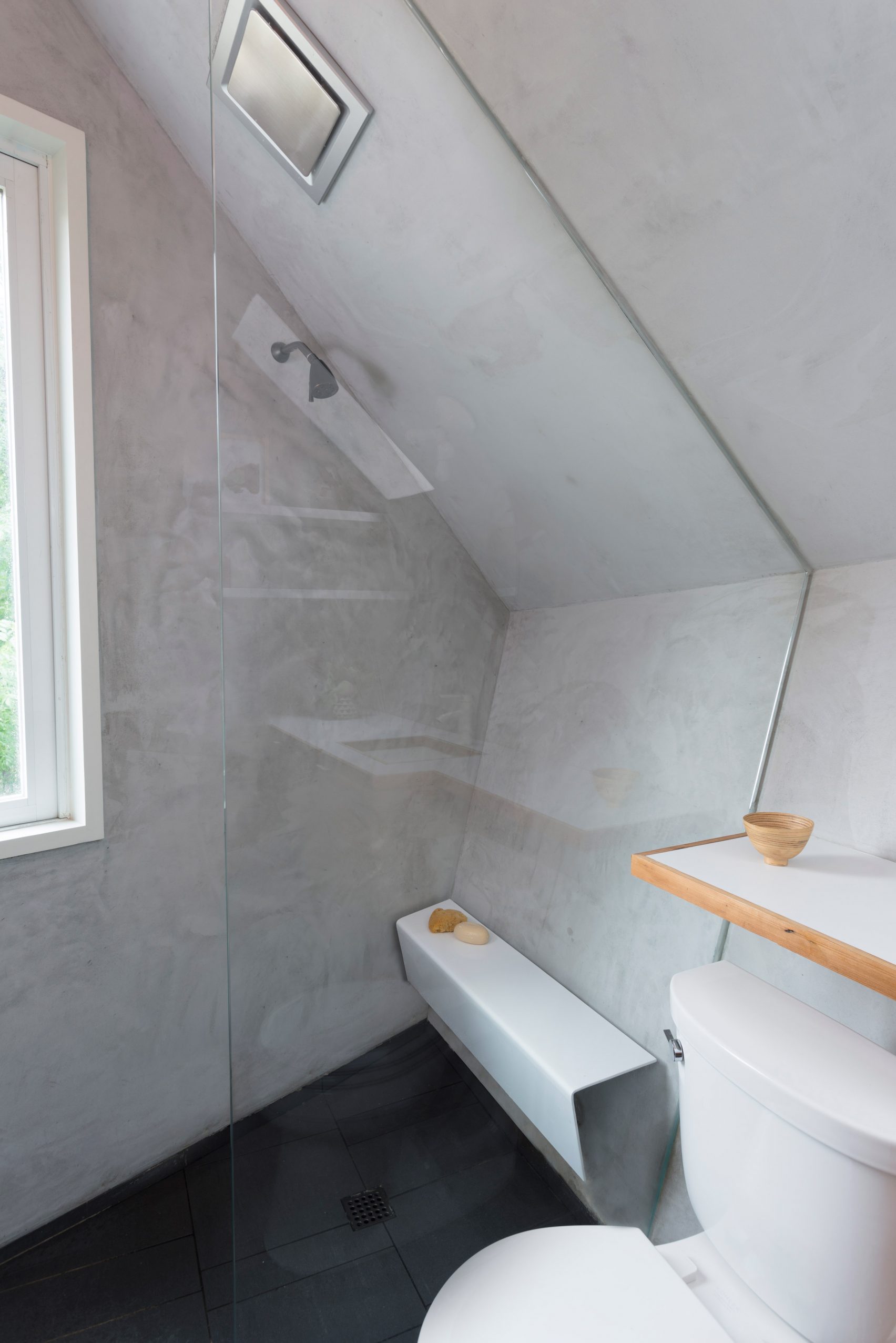 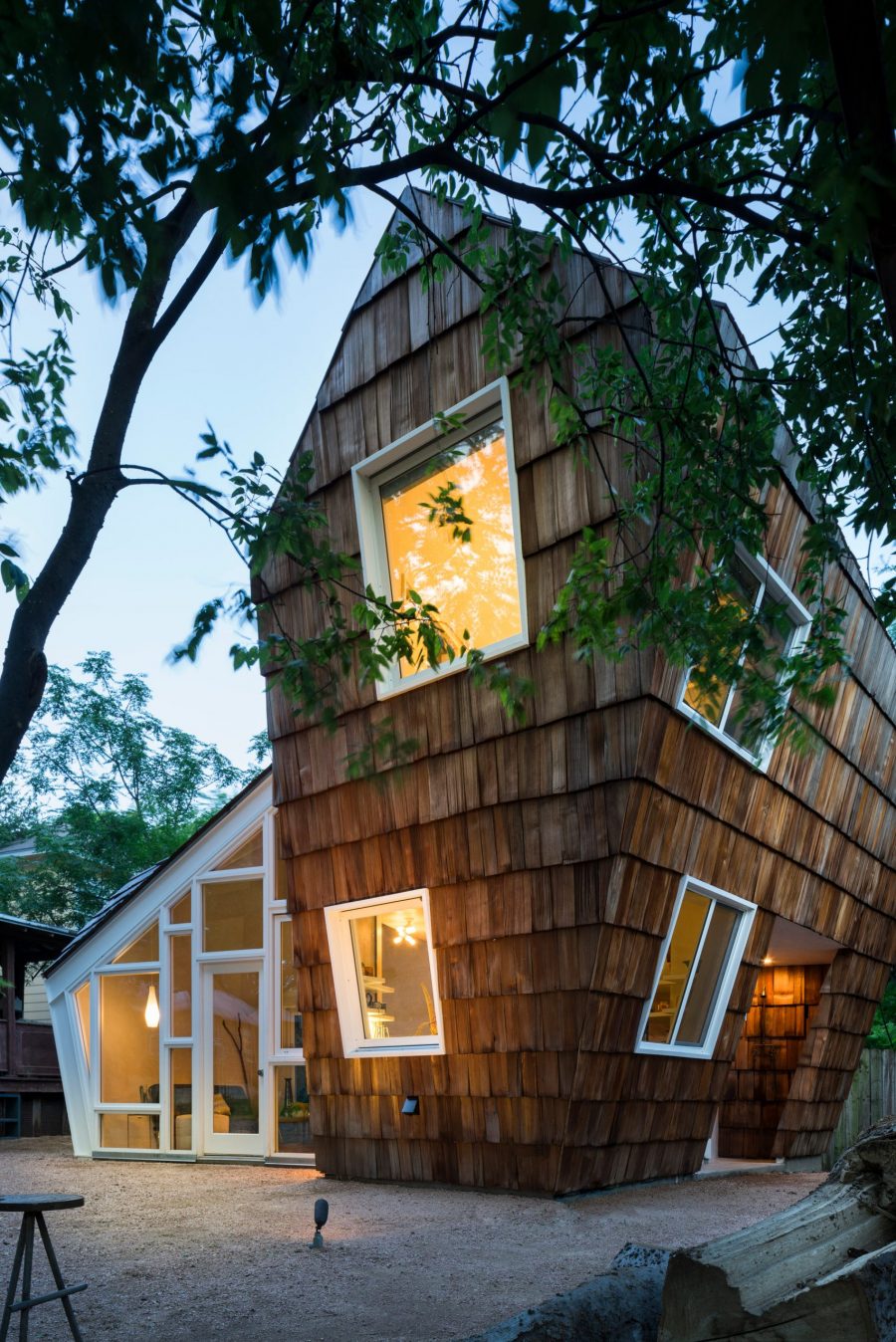 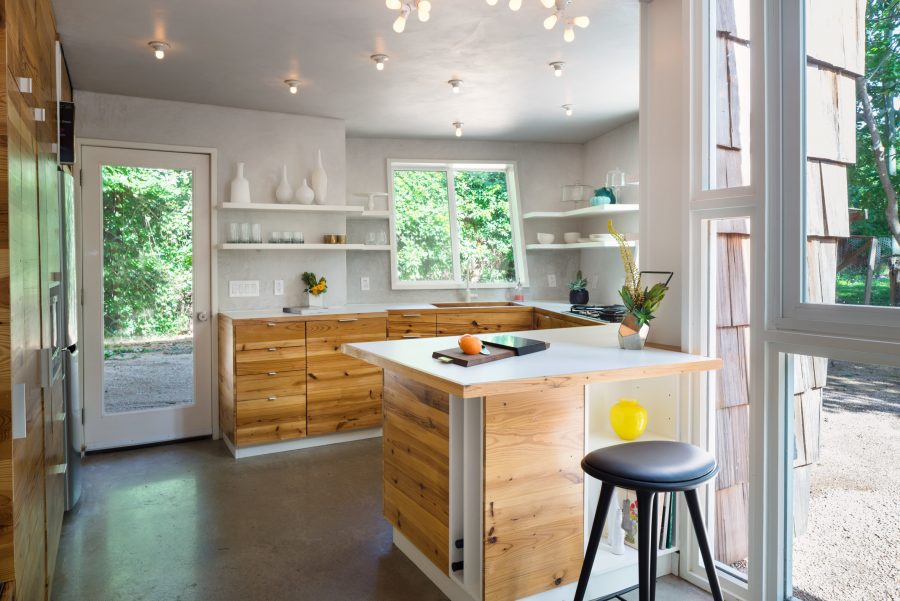 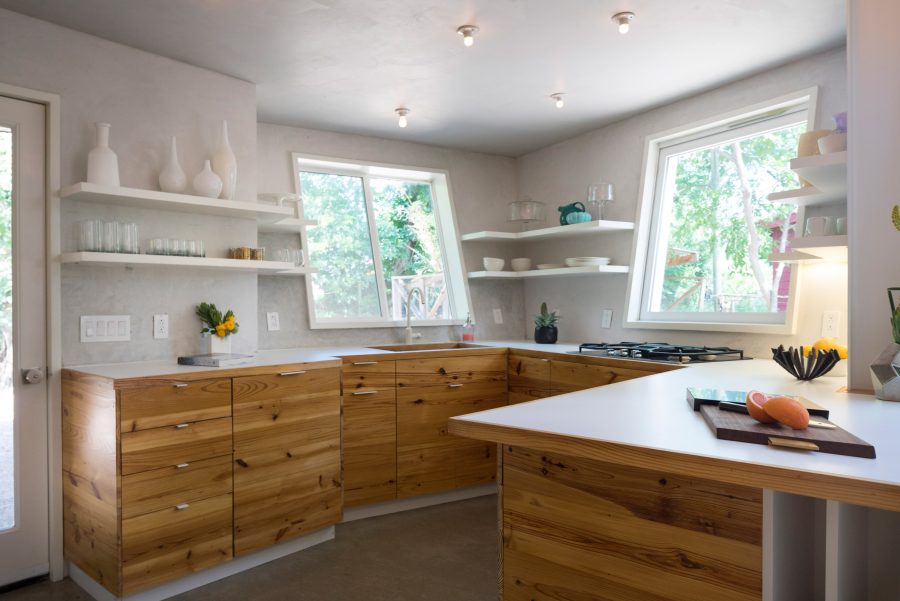 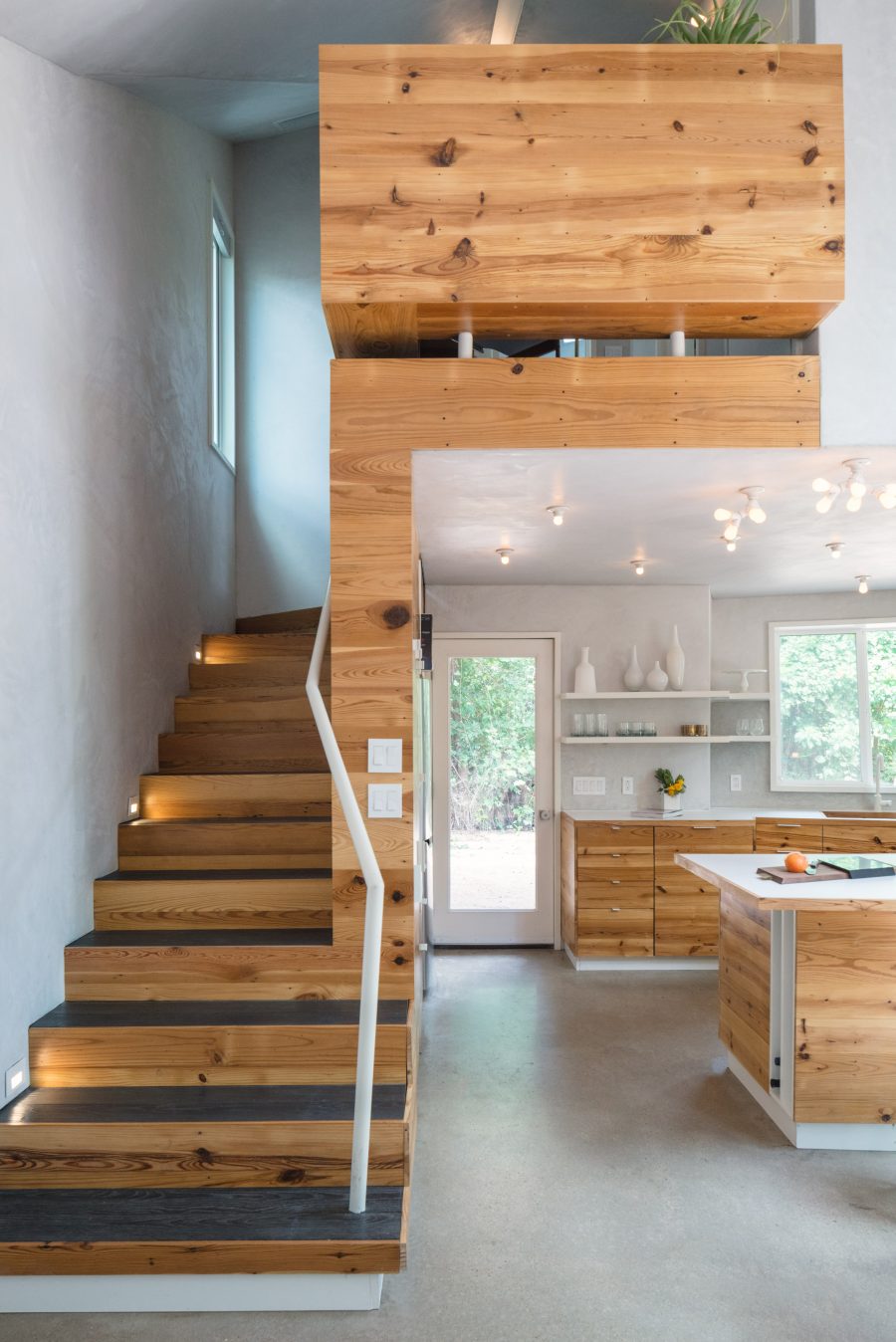 With the exterior walls being clad in large cedar shakes that were crafted using old roofing material, there is an aesthetic appeal to The Hive quite unlike anything else out there. It has differently-sized windows which have been framed in white and bring a pleasing amount of daylight into the compact guest home. The rooms within widen and narrow, depending on how the space is being used and according to Blair, this strategy was influenced by the principles represented in the Vitruvian Man, the famous 15th-century drawing by Leonardo da Vinci.

It is clear that the Hive Guest House looks incredible from the outside but it maintains this superb aesthetic throughout the property. In the kitchen, the walls lean outward which allows for more counter space than you’d expect and makes cooking a pleasure. Moving into the bedroom, the room widens at knee-height, which allowed for the placement of a queen-sized mattress and there are even clever uses of space in the bathroom. 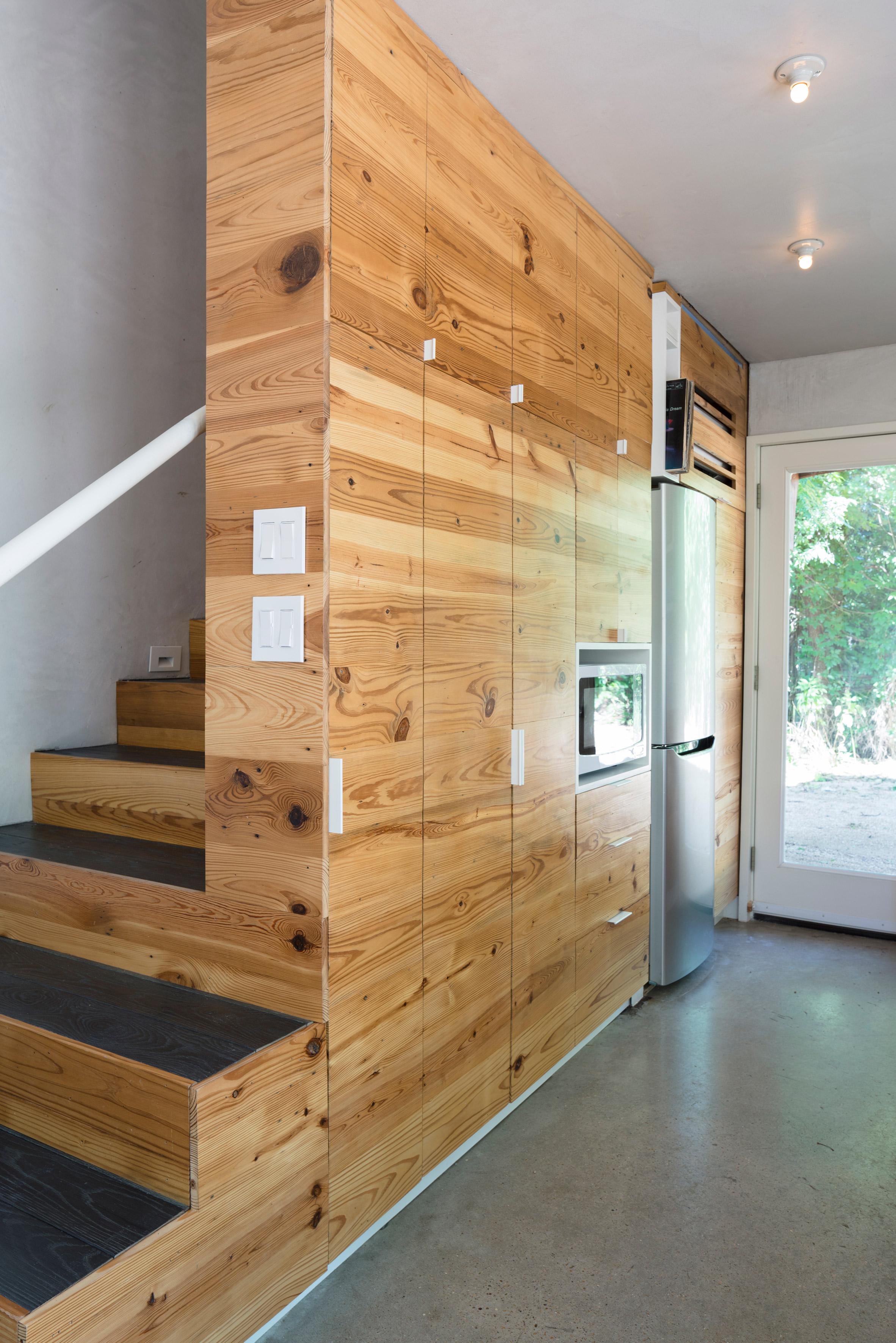 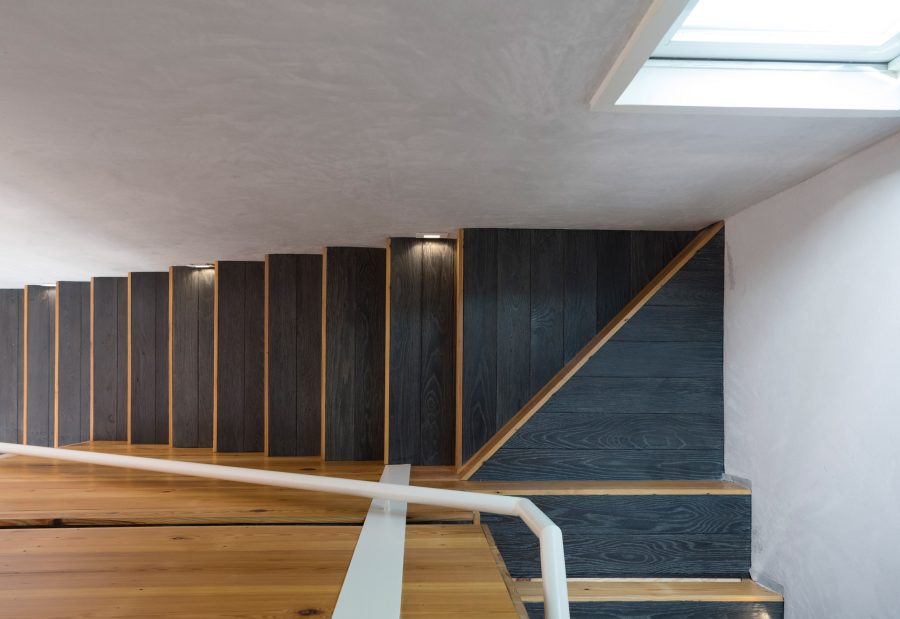 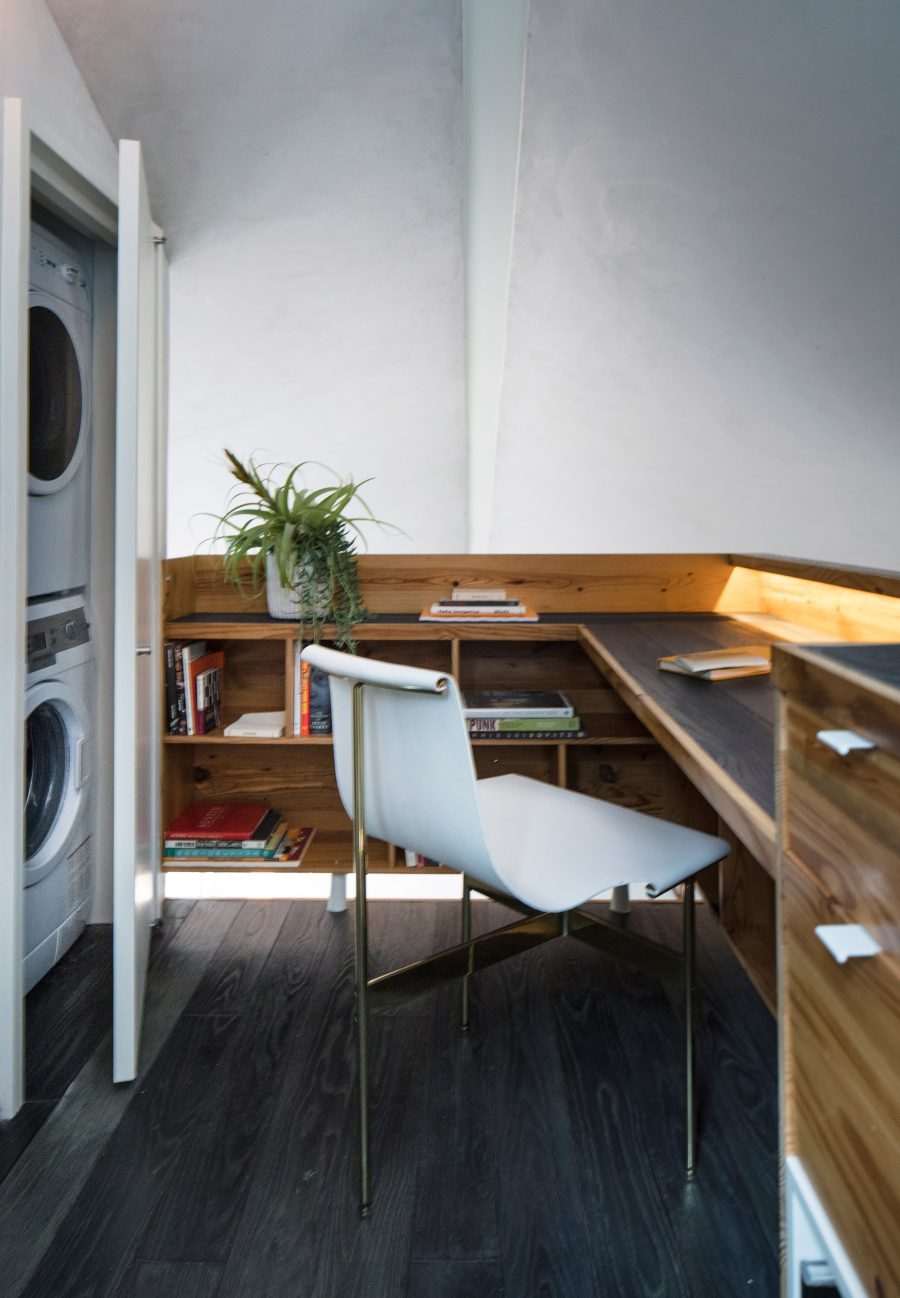 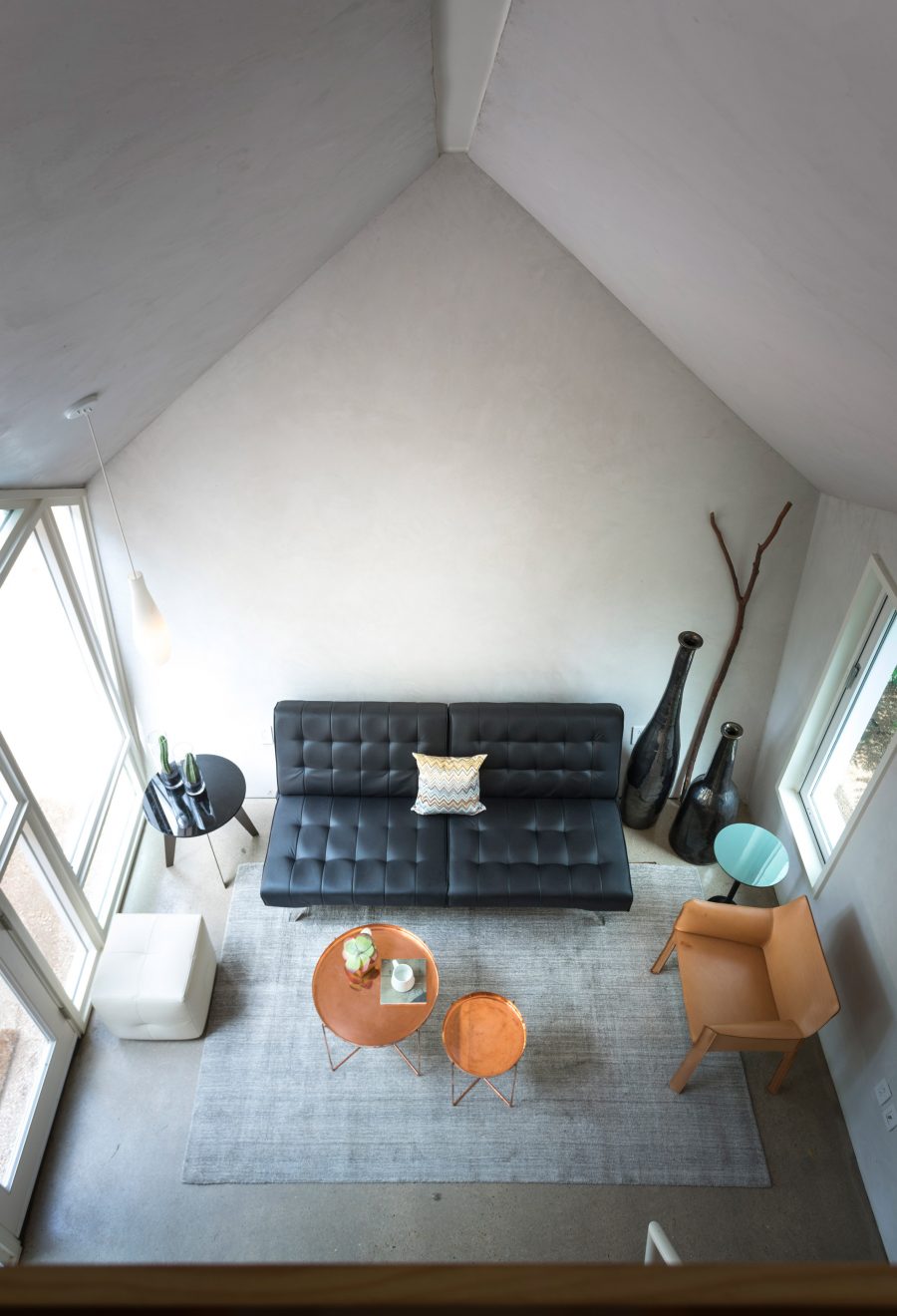 There are an eclectic mix of finishes throughout the Hive Guest House and this includes stucco walls, concrete and blackened wooden flooring, and cabinetry fronts which have been crafted from reclaimed longleaf pine. There are a variety of bespoke features in the property, such as exposed copper pipes in the bathroom and an outdoor shower to be found in the home’s covered entryway. For those with a love of quirky architecture, this is a property for you.