There are plenty of adventure motoring events that stand out in the calendar but, for us here at Coolector, it is the Distinguished Gentleman’s Ride that is impossible to ignore – especially when you consider it has vehicles like this 400HP Turbo-Charged 13-B Powered Mazda RX-7 taking part in it. This spectacular machine is the ride of Mark Hawwa, the organiser of the Distinguished Gentleman’s Ride, and this year’s event will cover 585 cities across 93 countries with close to 100,000 riders and many millions of dollars raised for men’s health issues including prostate cancer and men’s mental health. 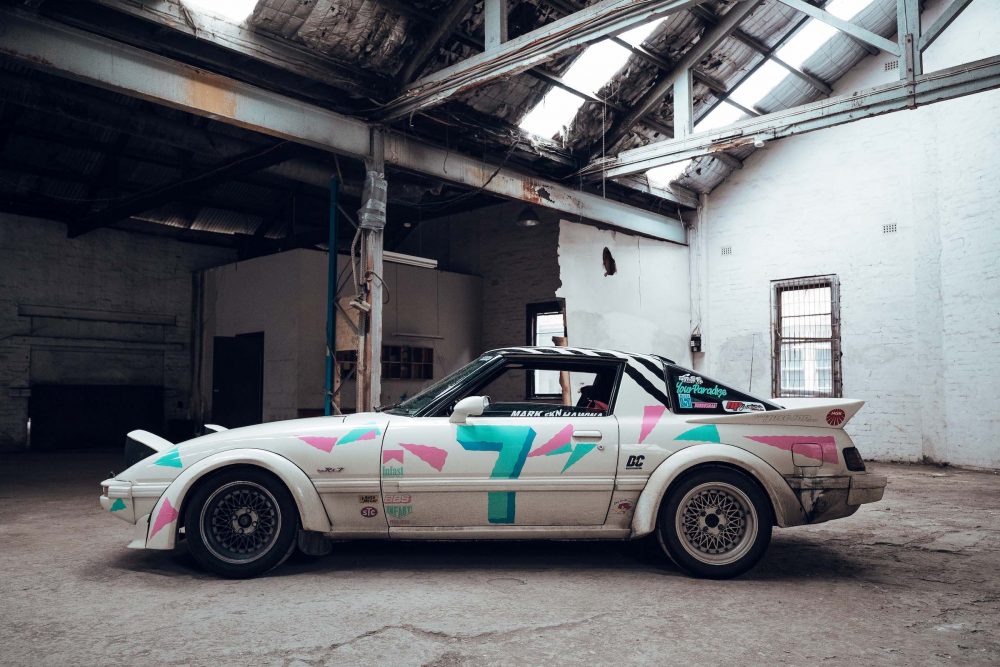 Needless to say, the man behind the Distinguished Gentleman’s Ride needs a steed fitting of his position and this 400HP Turbo-Charged 13-B Powered Mazda RX-7 is surely that. Definitely an affront on the senses, a pleasant one of course, this breathtaking machine will certainly be turning heads aplenty as it makes its way across countries and continents in this fantastic motoring event which raises money for some excellent causes.

Mark Hawwa’s 400HP Turbo-Charged 13-B Powered Mazda RX-7 is no shrinking violet in the visual department and boasts some of the most striking bodywork that’s likely to be witnessed in the Distinguished Gentleman’s Ride. Mazda first released the RX-7 back in 1978 and it was supposed to be a replacement for the RX-3. The eye-catching contraption was designed by Matasaburo Maeda as a competitor to the likes of the Porsche 924 and it had a performance that was very well regarded. It was immediately popular in Japan and in the global markets where it was offered, it combined a relatively low kerb weight of 1,000 to 1,100 kgs with a punchy rotary engine in capacities from 1,146cc (12A) up to 1,308cc (13B-RESI). 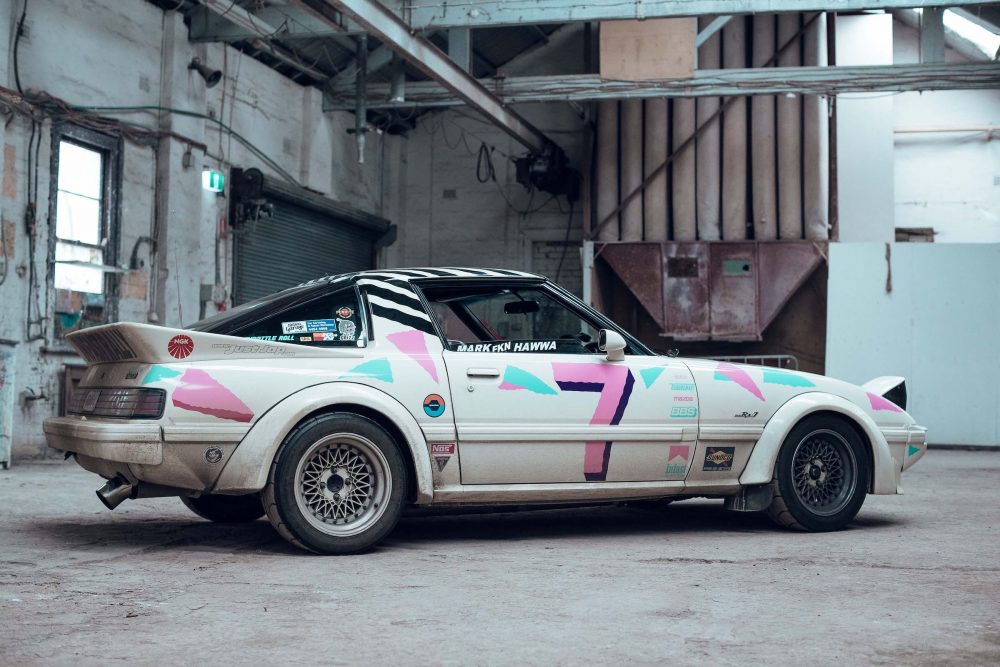 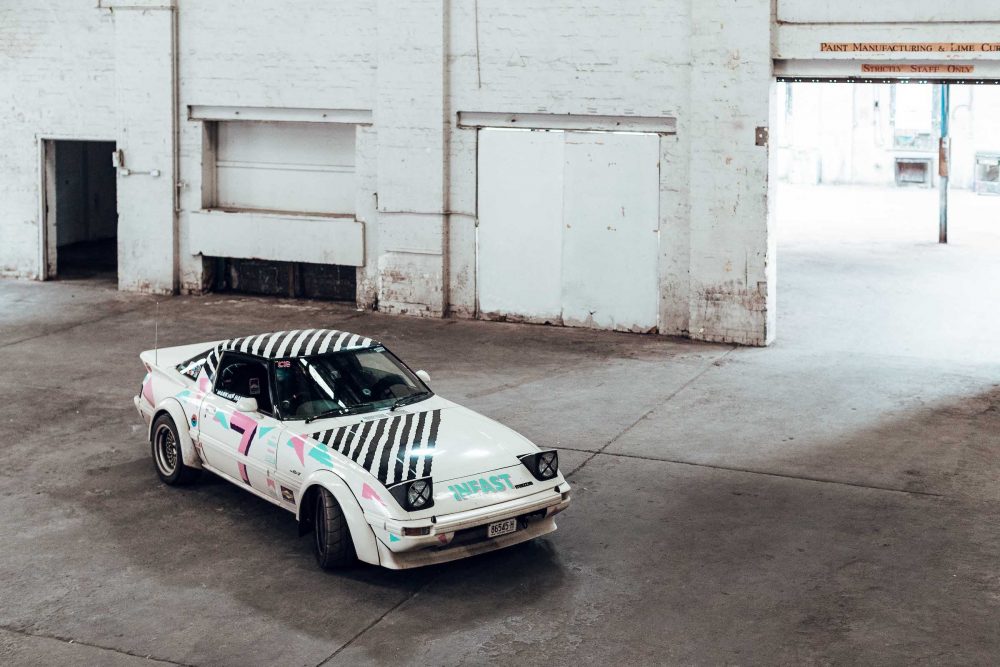 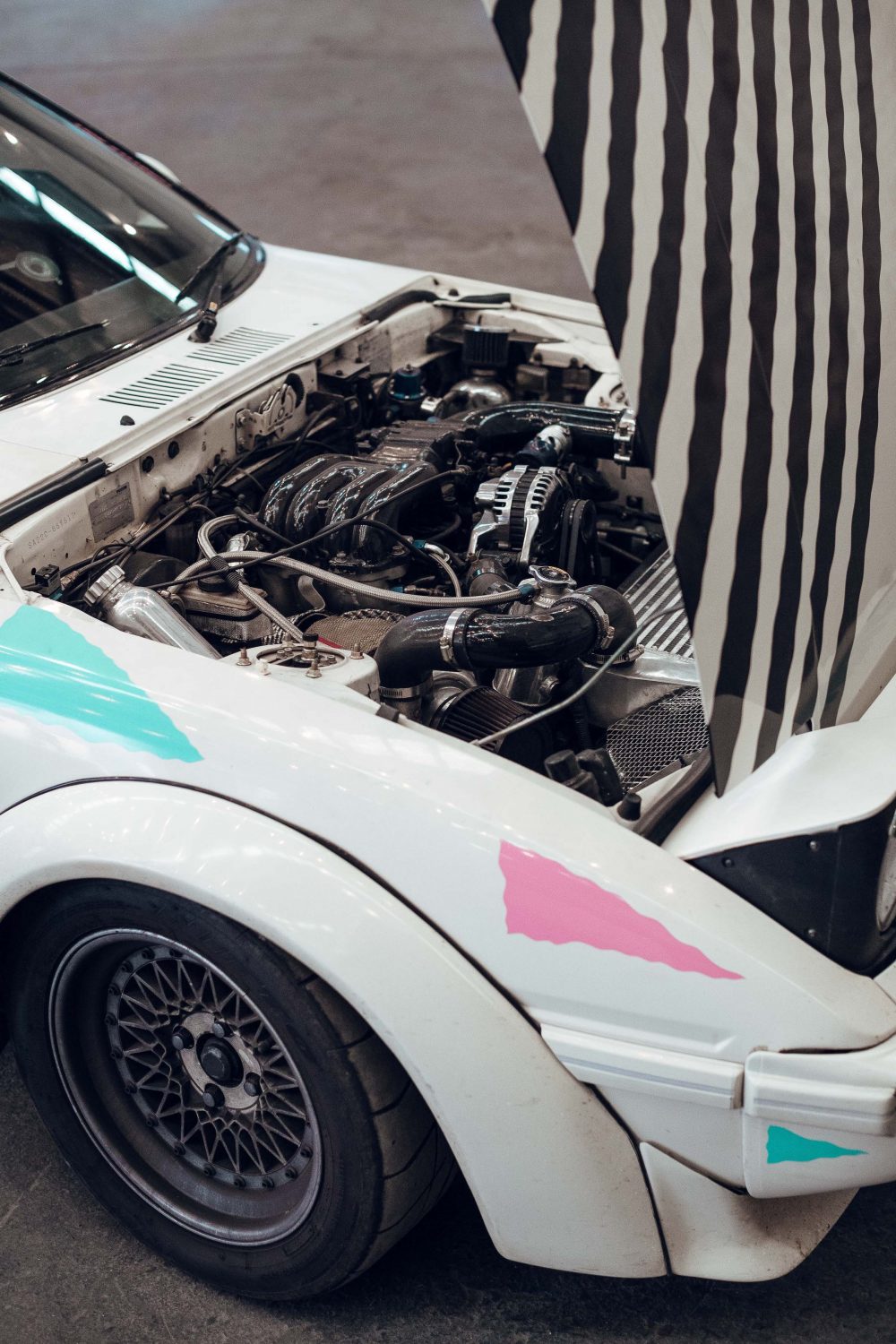 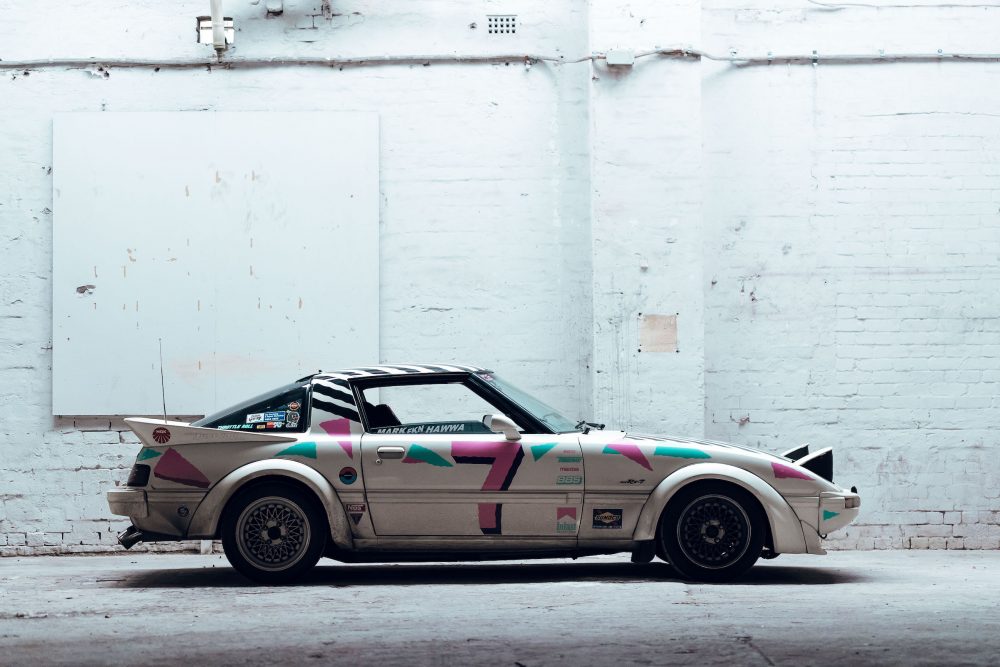 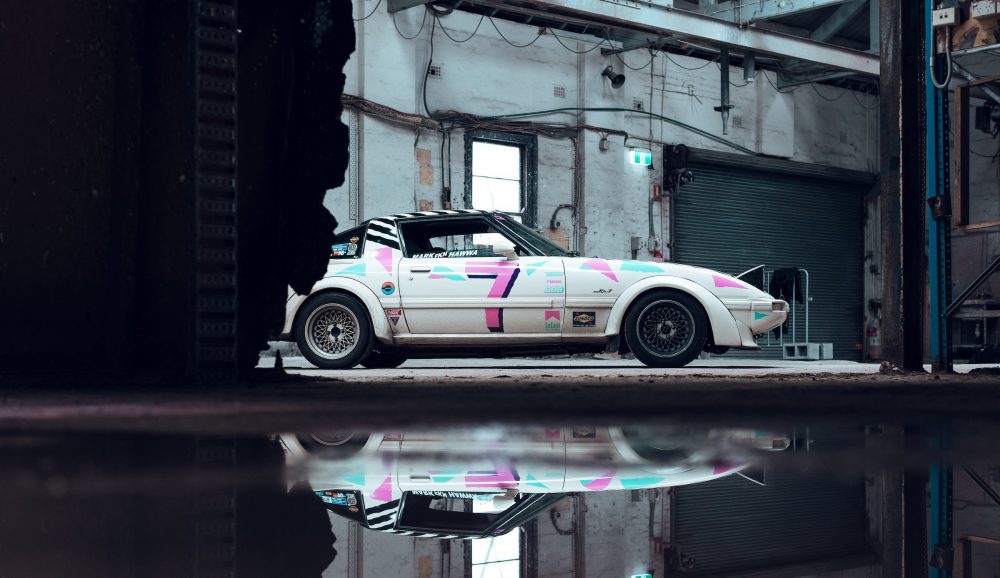 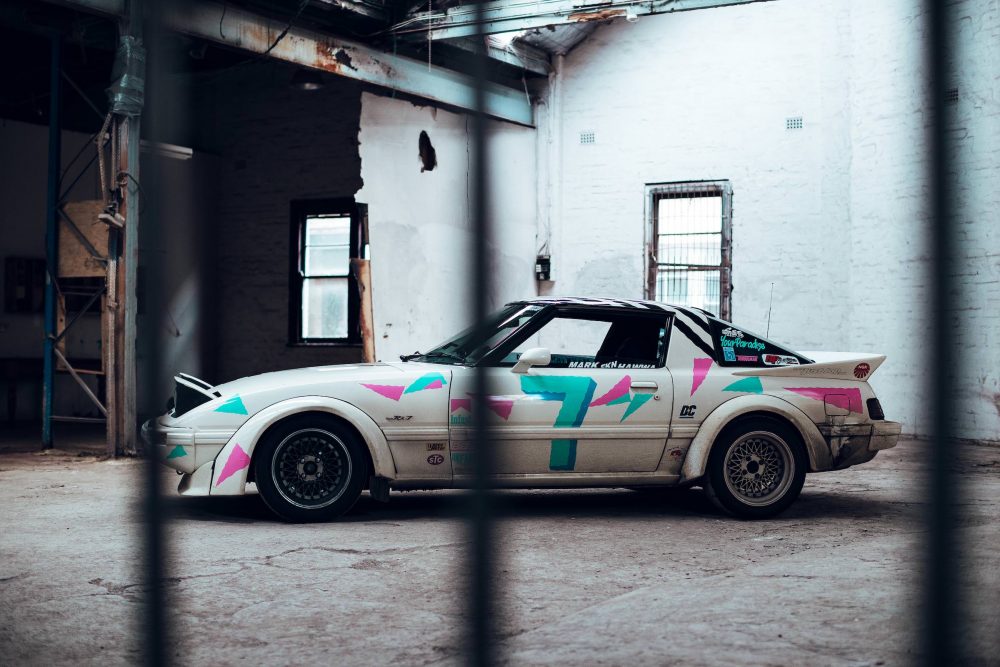 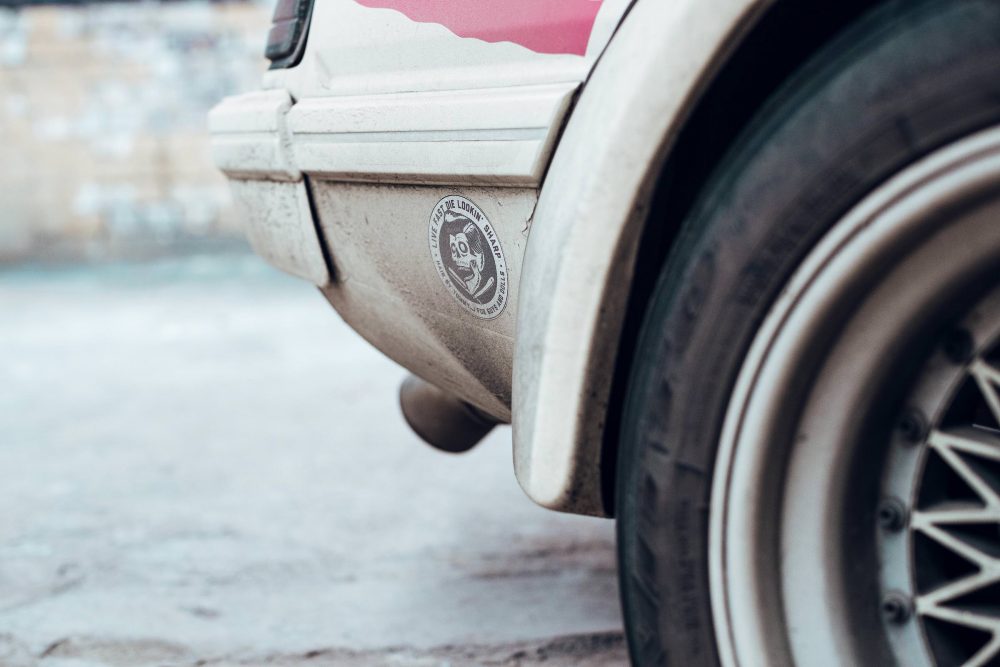 This 400HP Turbo-Charged 13-B Powered Mazda RX-7 for Mark Hawwa to use in the Distinguished Gentleman’s Ride is a 1983 model which has now been kitted out with a rebuilt 13B rotary that has been fitted with a GCG T35 turbocharger running 14lbs of boost and an air-to-air intercooler. The engine management of this magnificent beast is taken care of by a Motec ECU running Bosch injectors and a Tune Flex able to run E85 or 98 octane fuel so it can certainly go at a fair old pace when it needs to. 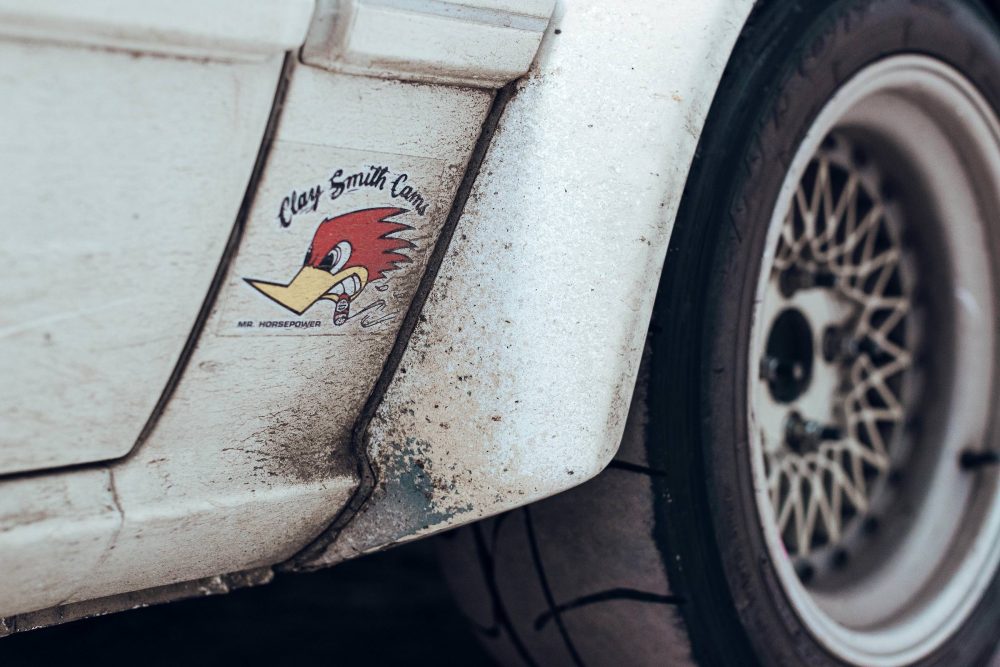 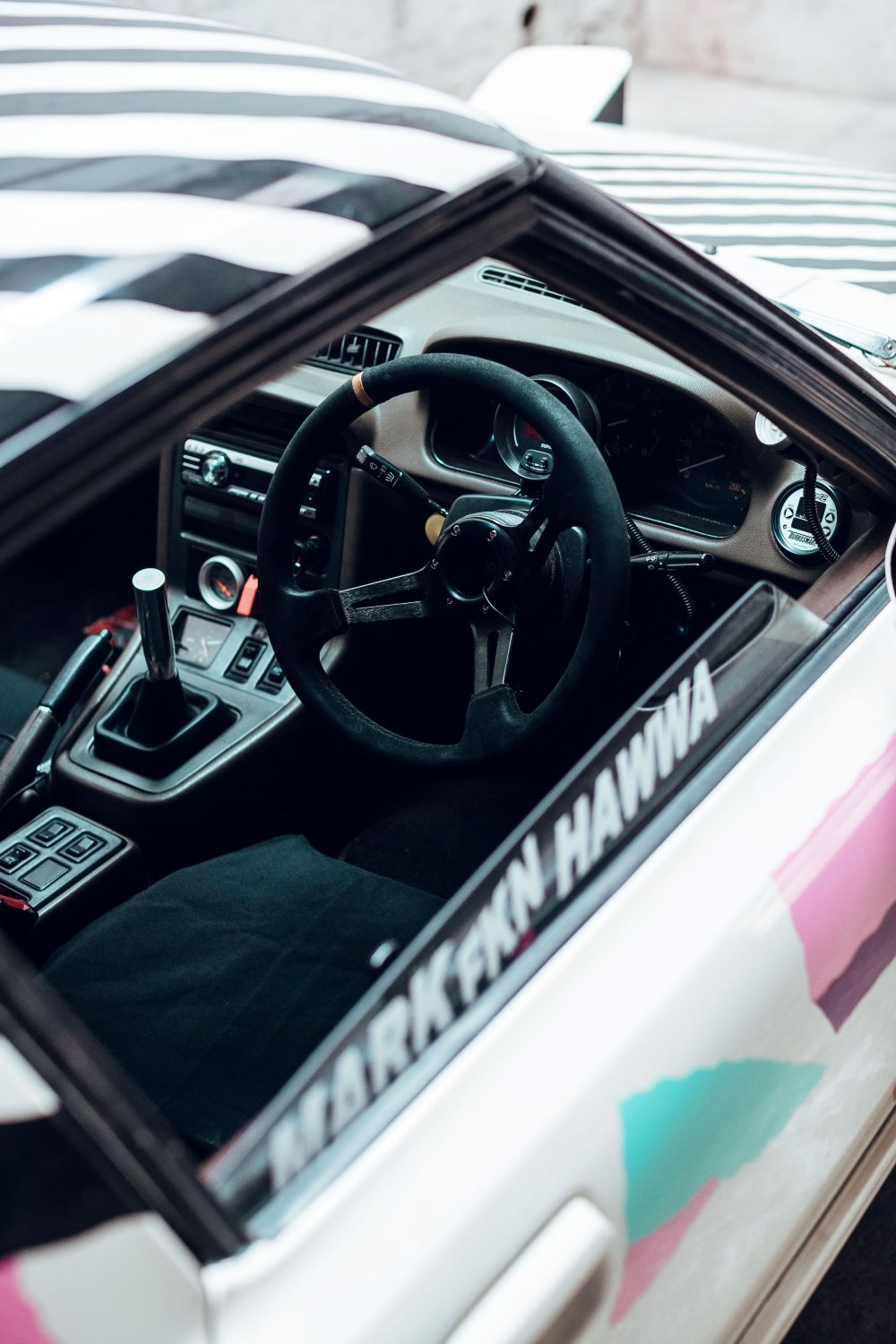 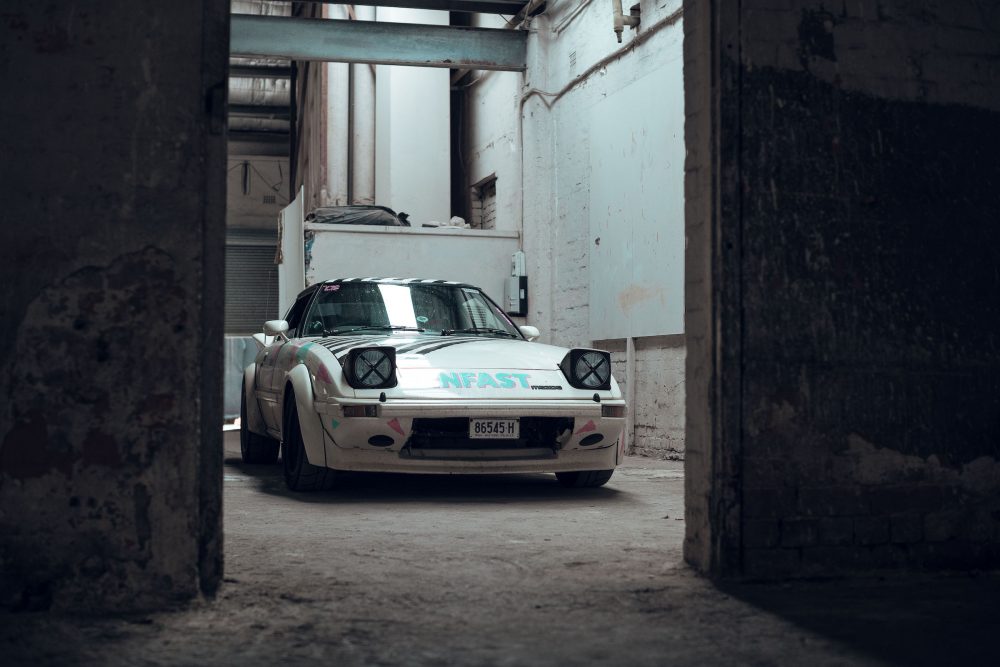 In its current configuration this, frankly phenomenal looking, car is putting out 400 hp at the rear wheels, which, in truth, was far too much for the original differential and axle so Mark Hawwa’s version of the machine boasts a Toyota Hilux rear axle that can get the power to the wheels without over-extending itself in the process. BC racing suspension has also been used and the car is fitted with an S5 gearbox, and a Group C bodykit which is similar to that used on the now legendary Allan Moffat car raced in Australia in-period.

The Distinguished Gentleman’s Ride is a great event for a number of great causes and it’s certainly a spectacle when you see some of the vehicles which are to be found on the starting line – not least, Mark Hawwa’s spectacular Mazda. It has Techno Toy control arms, tension, and lateral rods, as well as Nitto NT01 semi slick tires and Compomotive wheels. The car is currently wearing its InFast livery for the InFast Rally, a private endurance rally that is strictly invitation only and takes place annually in Australia – typically covering over 2,000 miles in 7 days. 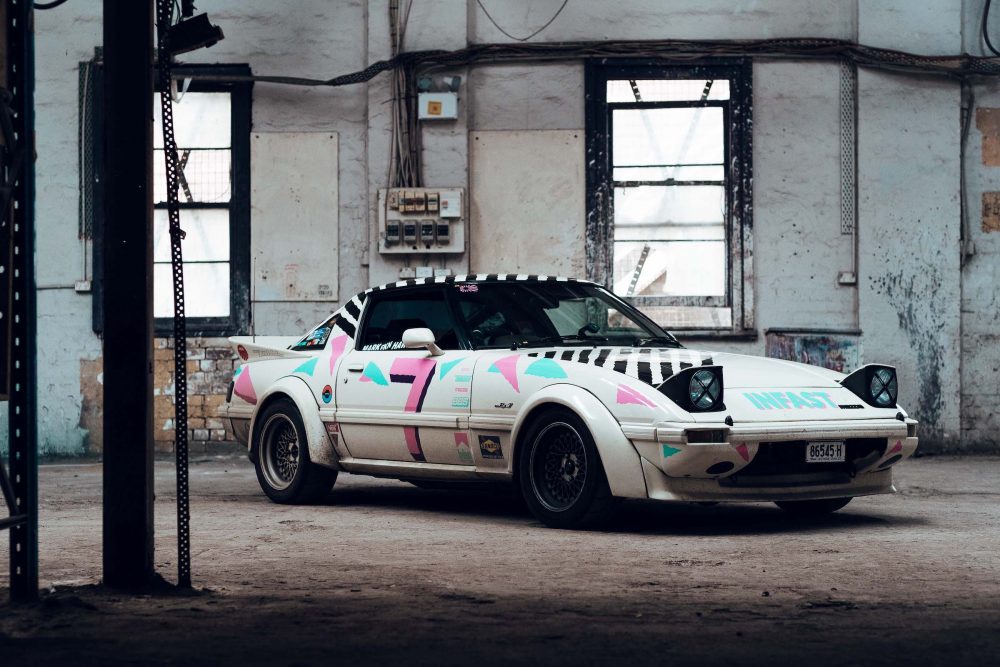 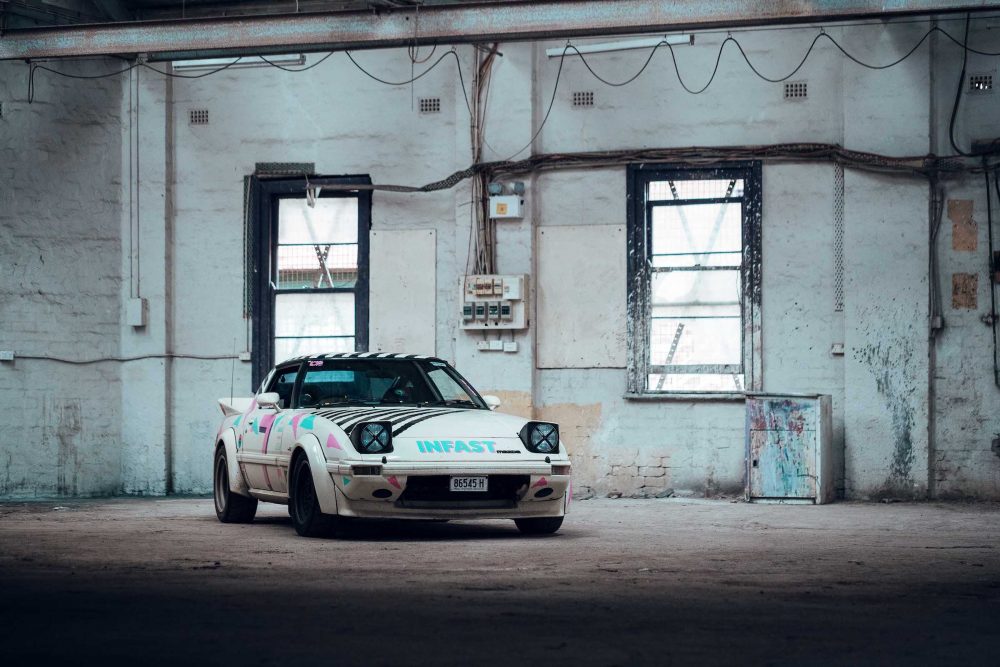 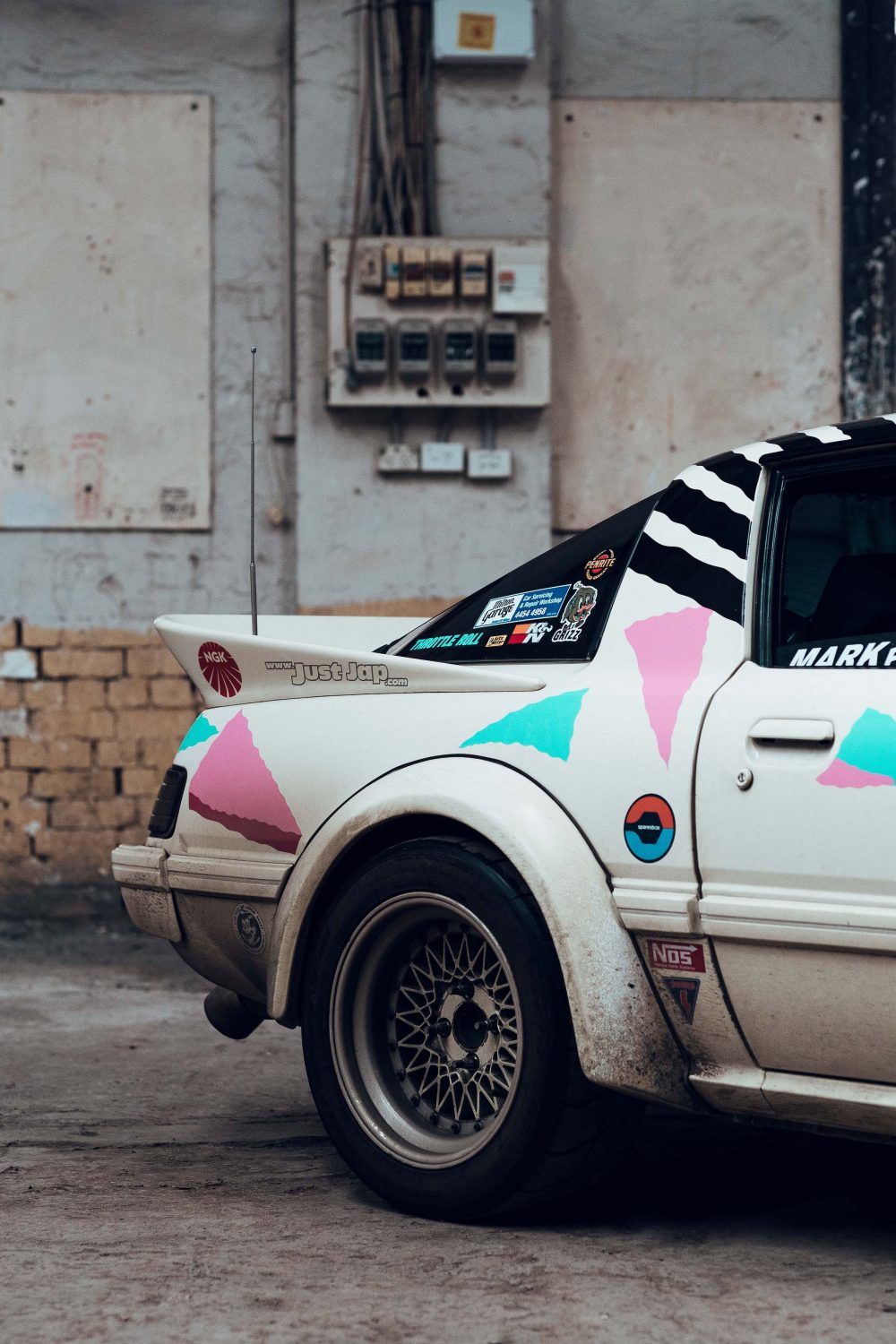 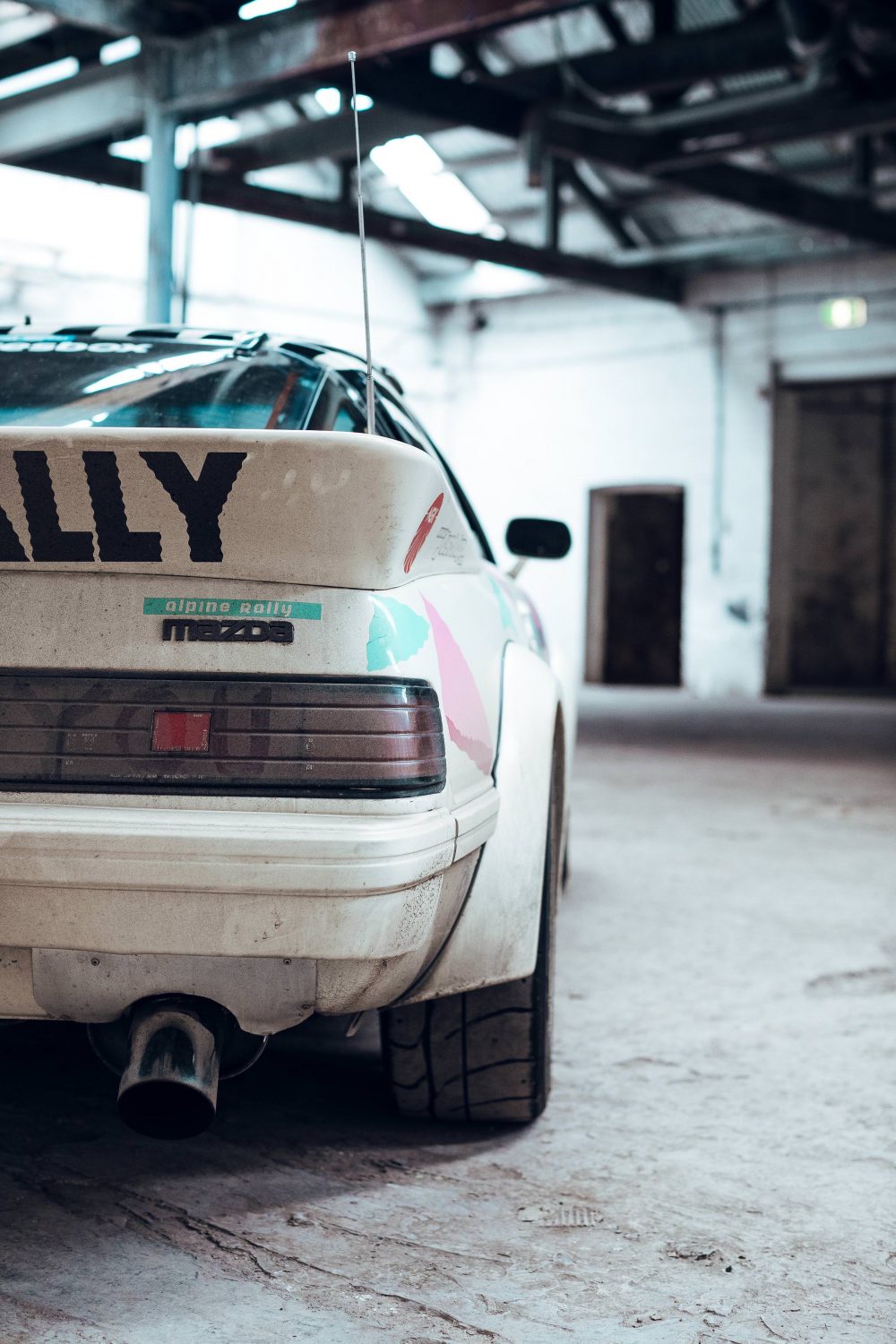 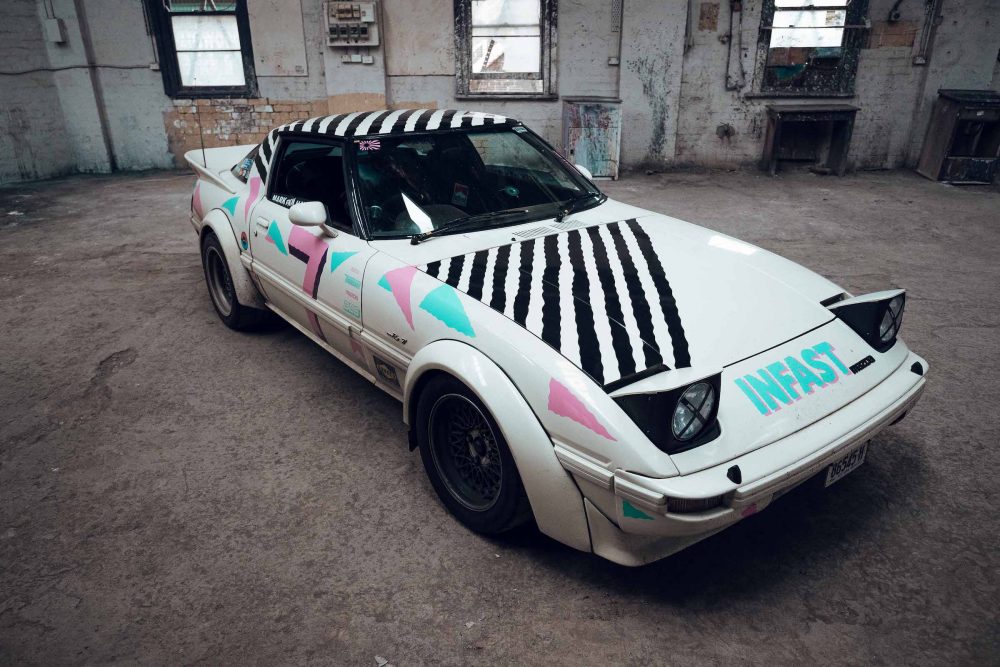 A superb looking steed for an excellent event, this 400HP Turbo-Charged 13-B Powered Mazda RX-7 will definitely be one of the stand out performers at the Distinguished Gentleman’s Ride and for those with a love of madcap motoring adventures, this might just be an event you want to look into in the future.