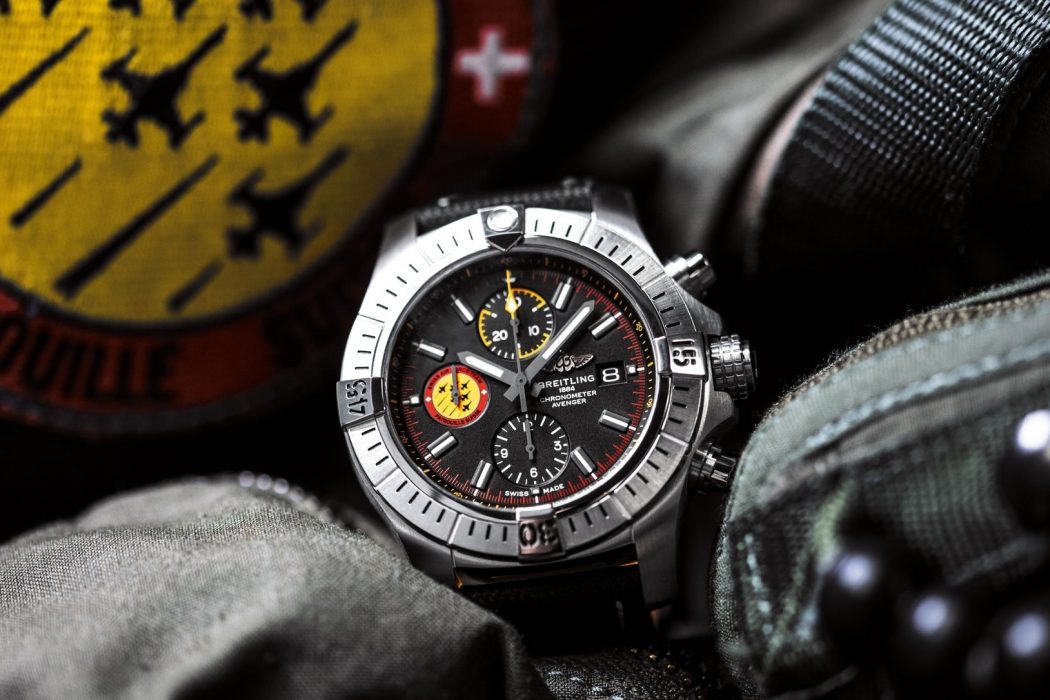 So far as limited edition watches are concerned, few luxury watchmakers make them quite as appealing and sought after as Breitling and so it has proven once again with their latest release – the spectacular Breitling Avenger Swiss Air Force Team Limited Edition Watch. This glorious looking, aviation inspired timepiece is a celebration of the 55th anniversary of the Patrouille Suisse Swiss Air Force Team, admired around the world for its dazzling aerial performances.

The Breitling Avenger Swiss Air Force Team Limited Edition Watch is a mighty fine looking watch which will undoubtedly appeal to the legions of aviation themed watch fans that Breitling have and the fact that a mere 550 are produced merely serves to add to its allure still further. If you want to get your hands on a Breitling that doesn’t just look the part but also boasts a compelling performance and exclusivity, this might just be the one for you.

In 1964, the Swiss Air Force created an aerobatics team, named Patrouille Suisse, which consisted of some of its most skilled pilots. Today, some 55 years later, the Patrouille Suisse squadron wows crowds with aerial displays in the skies above Switzerland and other European countries with precision performances in six supersonic jets. Breitling has created a new timepiece to celebrate the talents of these high-flying Swiss ambassadors: the Avenger Swiss Air Force Team Limited Edition – and it’s hard not to be impressed. 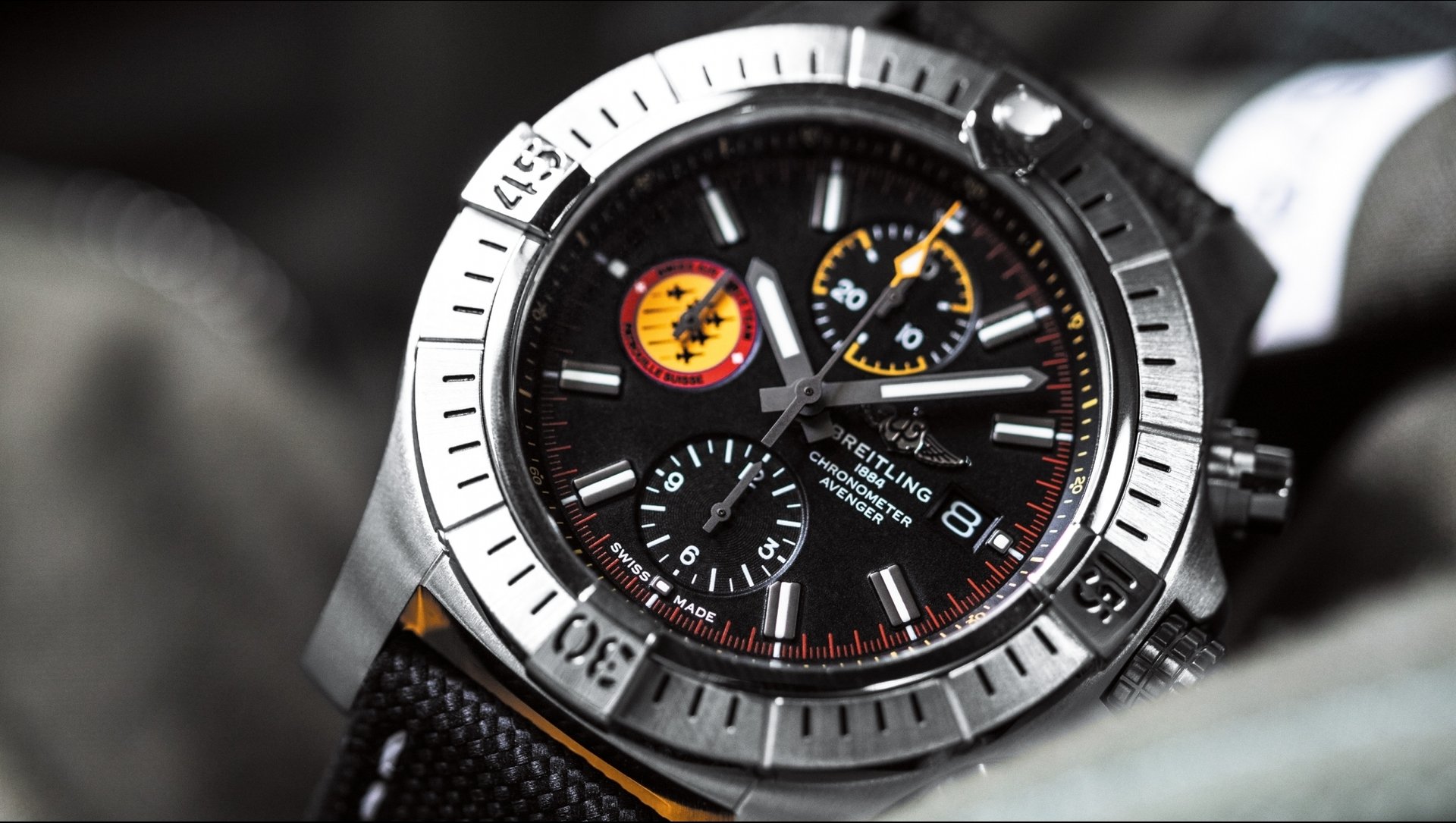 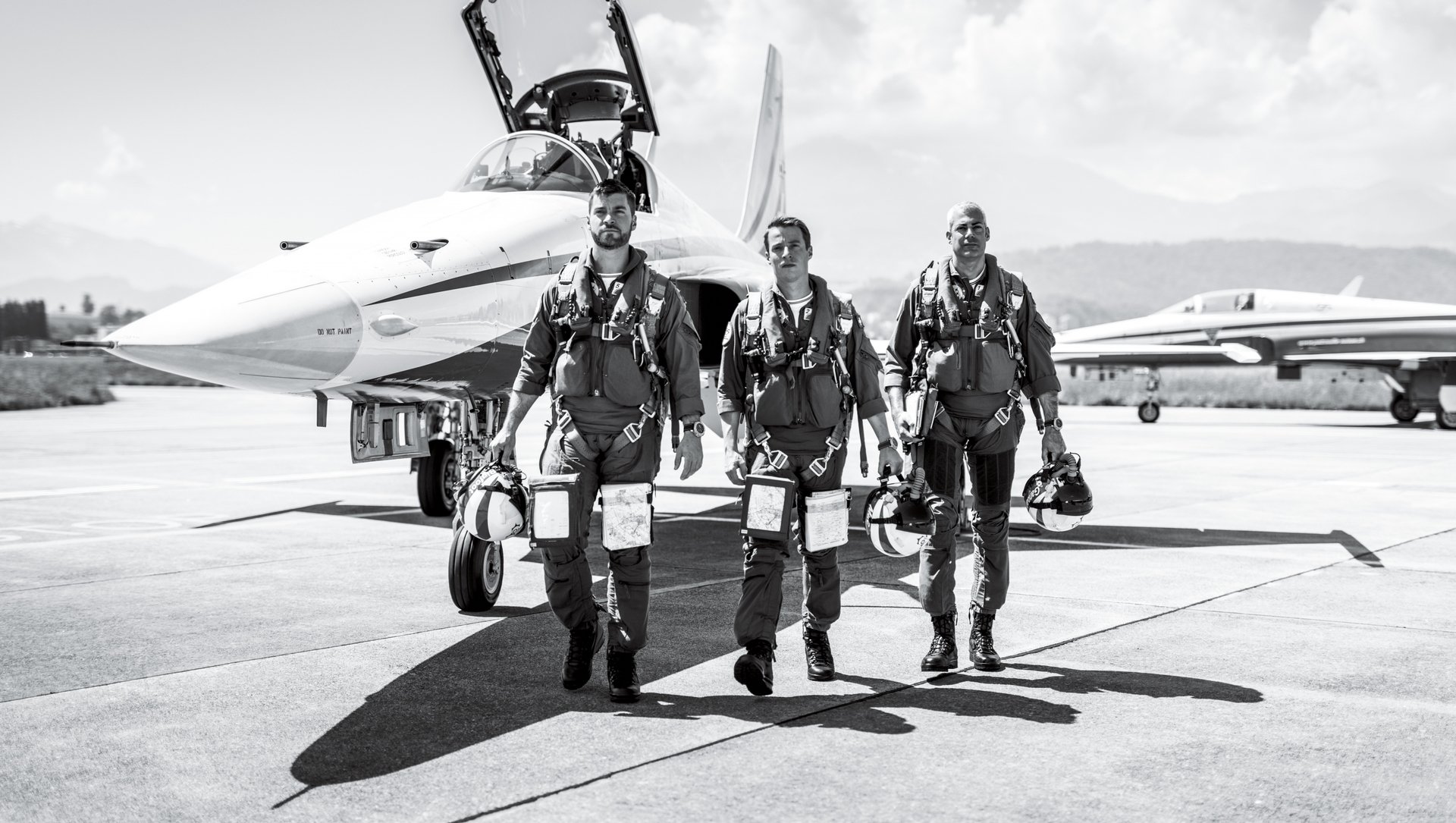 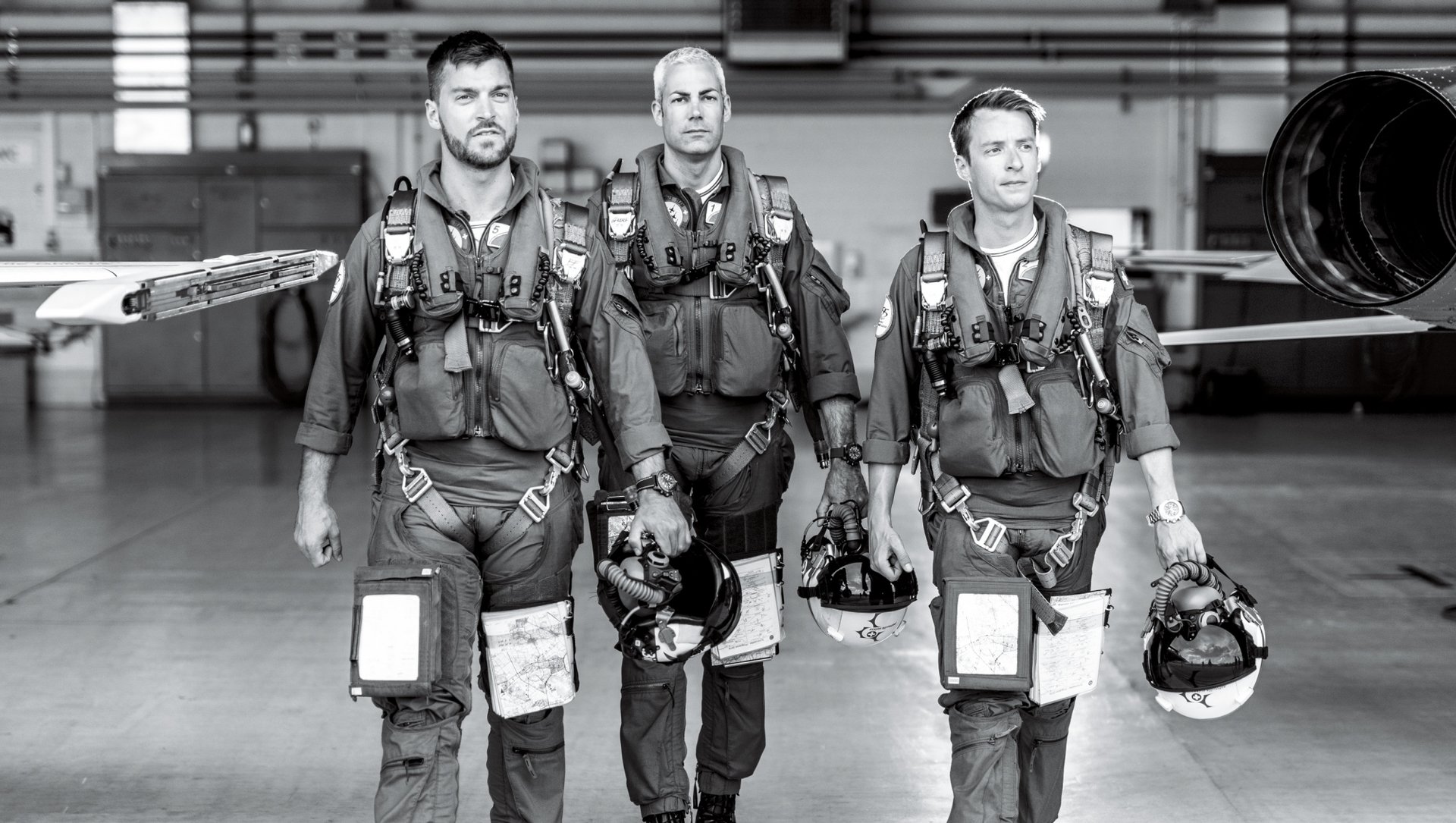 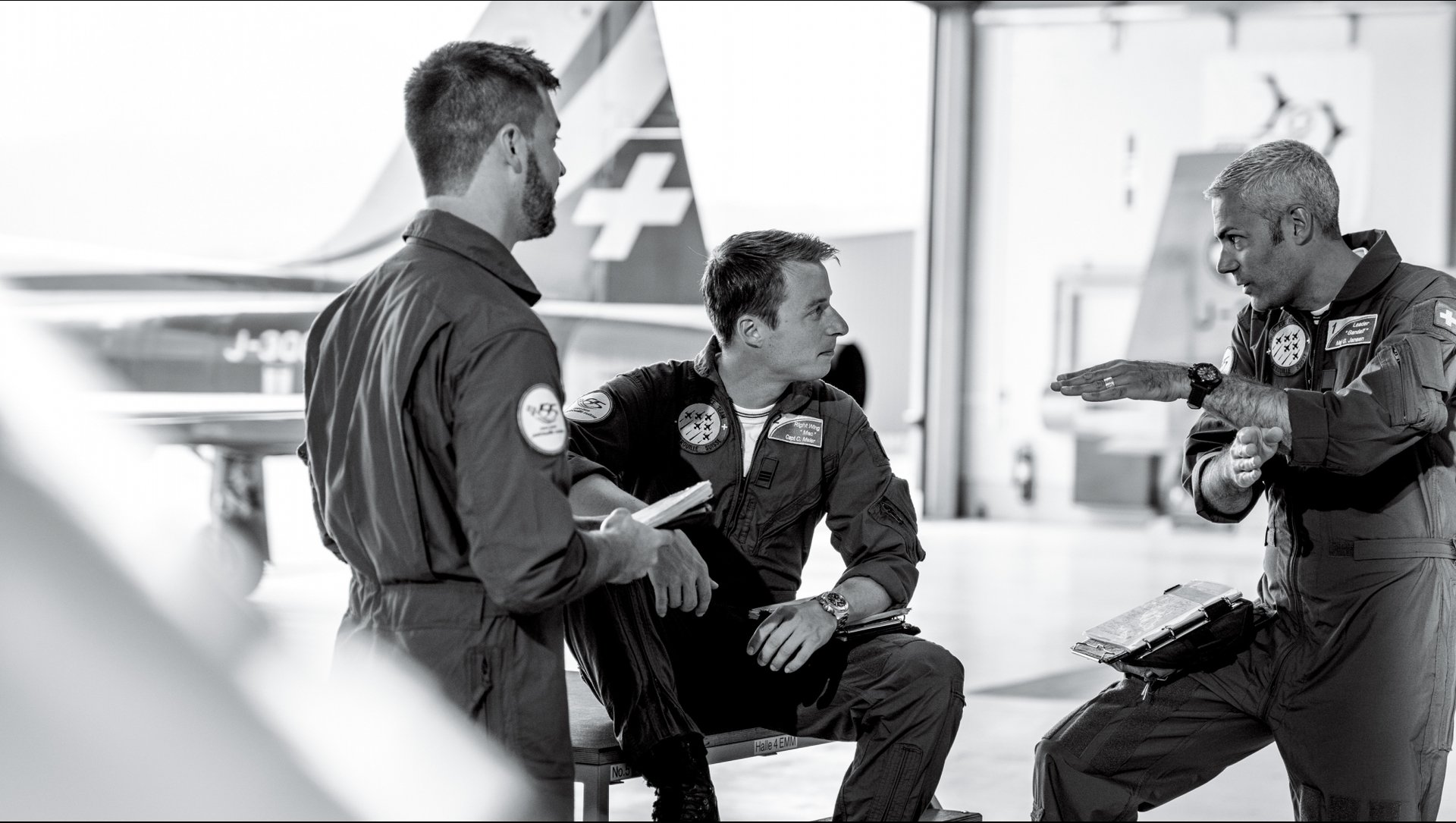 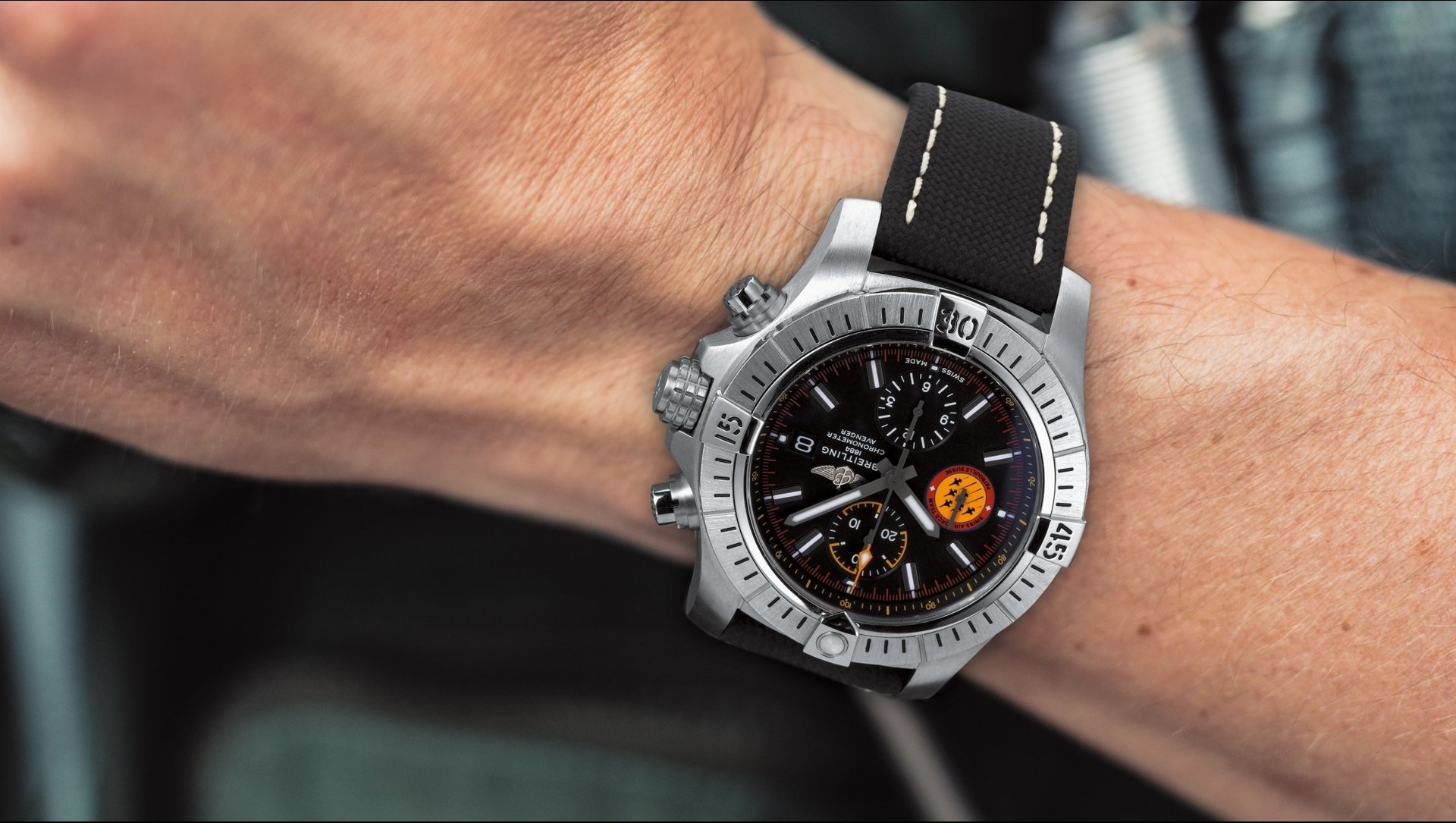 The Breitling Avenger Swiss Air Force Team Limited Edition Watch boasts a no-nonsense 45 mm stainless-steel case with a ratcheted unidirectional rotating bezel that delivers a tangible sense of quality to the timepiece. Its striking black dial features the logo of the Patrouille Suisse squadron on the subdial at 9 o’clock as well as the highly distinctive yellow and red accents that reflect the colours of the Patrouille Suisse squadron’s logo. The yellow-tipped second hand adds another dash of colour to proceedings and makes this one of Breitling’s most visually impactful timepieces in some time. 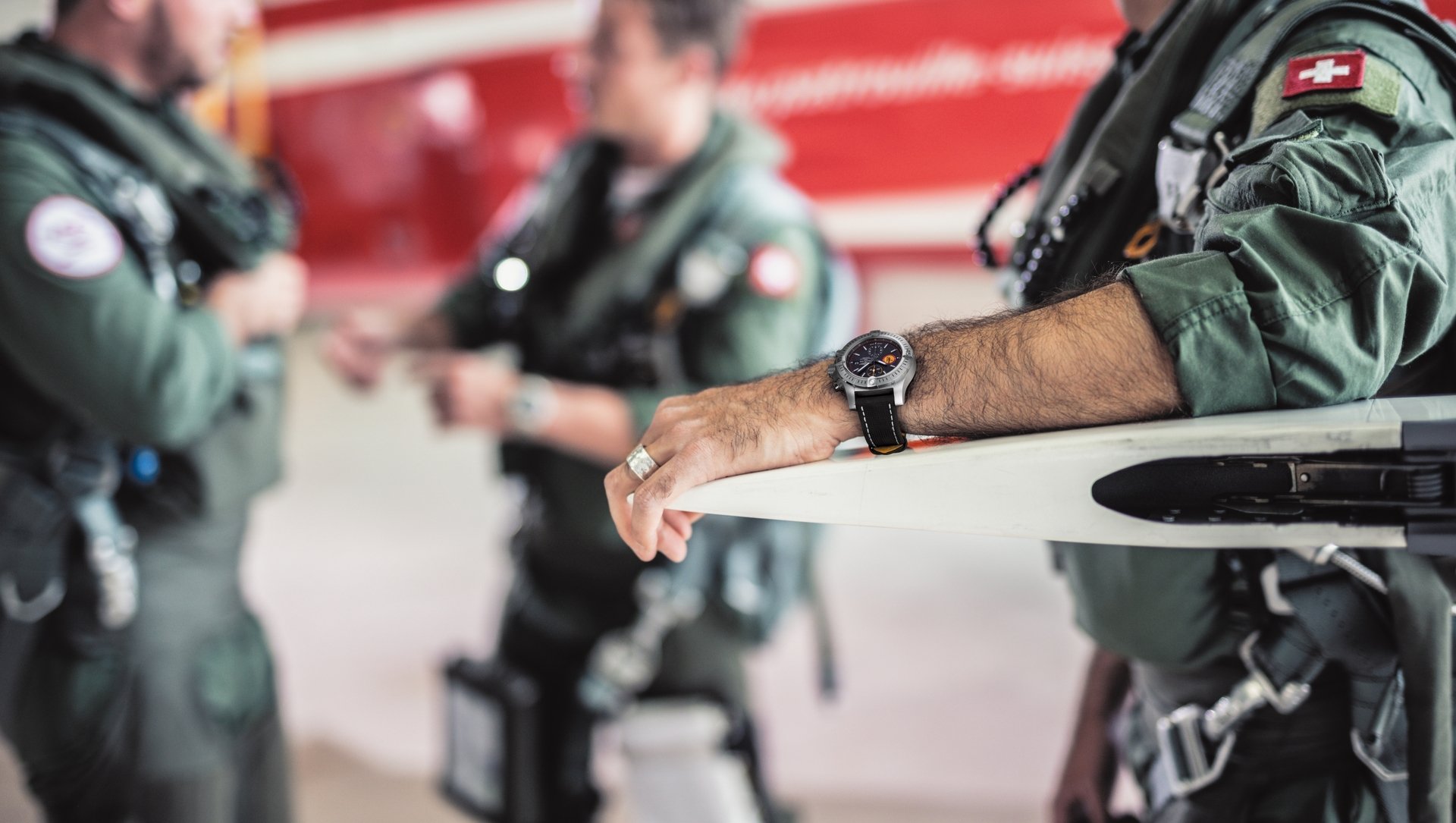 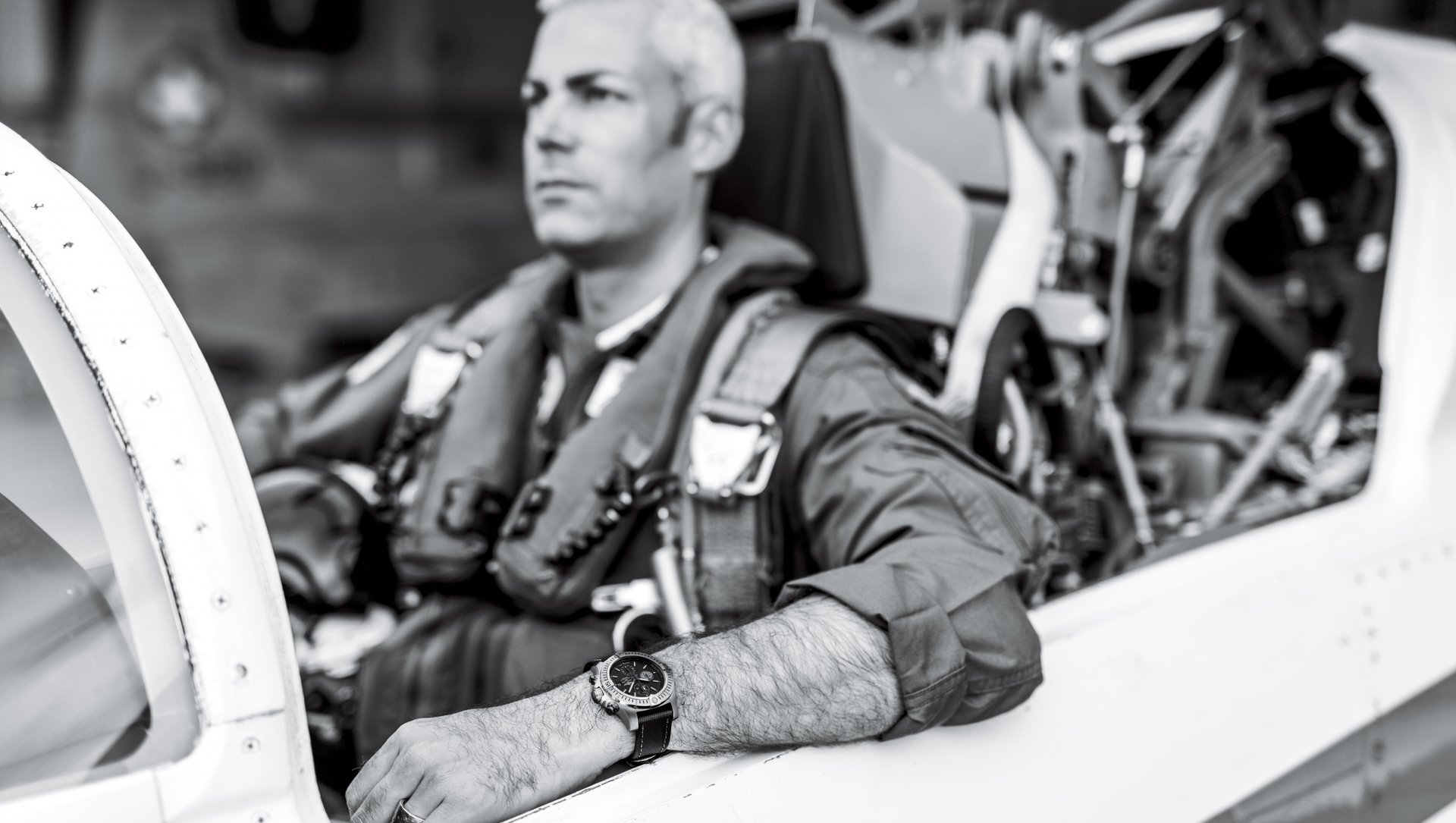 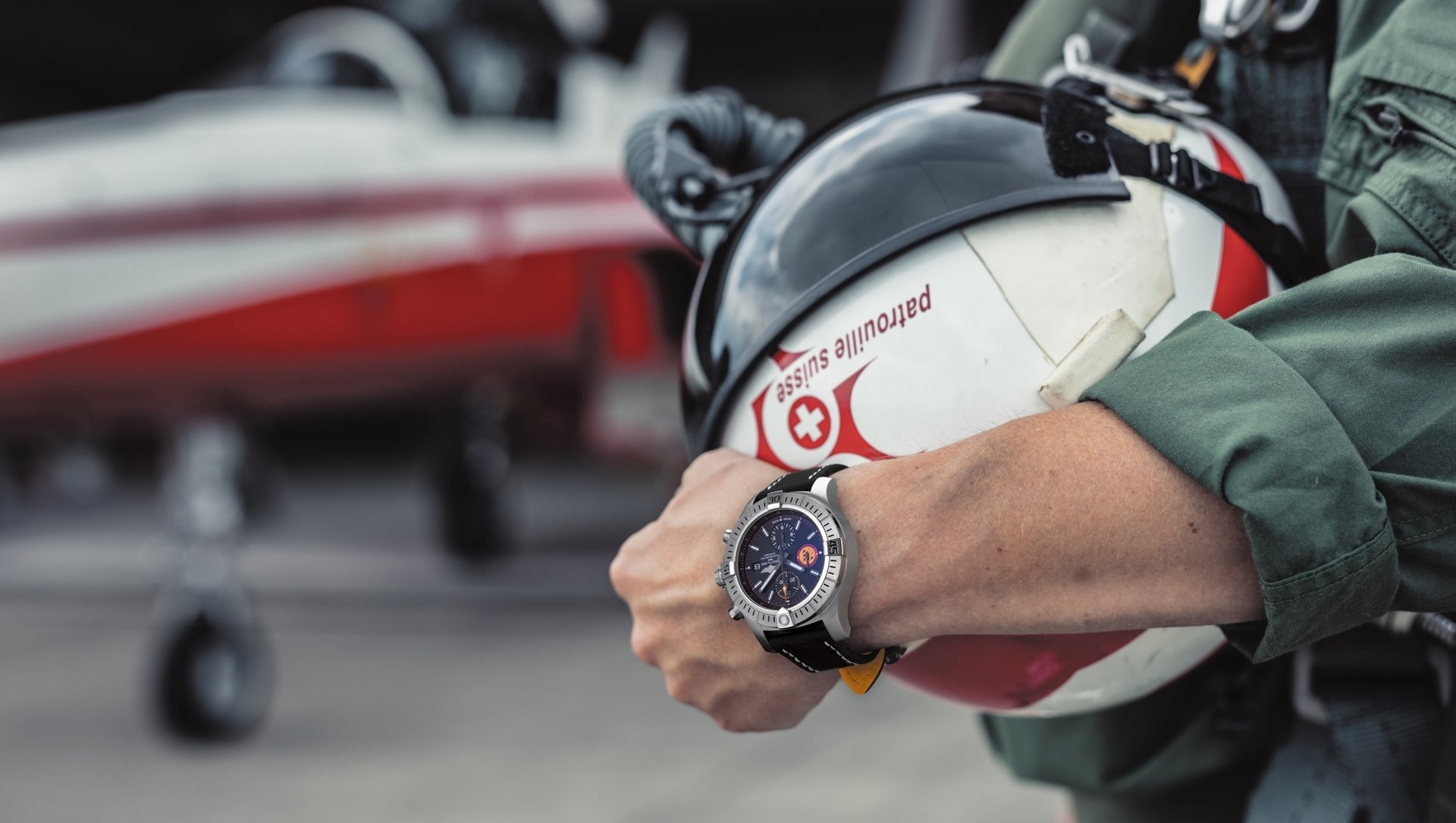 The hands and the black indexes on this exemplary timepiece from Breitling are coated with Super-LumiNova®, a luminescent material that makes them easily readable in all lighting conditions which is, of course, vitally important to pilots. The caseback is engraved with the Patrouille Suisse squadron’s 55th anniversary logo – a stylized 55 and six supersonic jets in flight – along with the words “ONE OF 550”, an indication of its special limited-edition status of this glorious looking limited edition release from Breitling.

The Avenger Swiss Air Force Team Limited Edition offers unparalleled performance and it is powered by a Breitling Caliber 13, a COSC-certified chronometer movement with a power reserve of approximately 48 hours. It is water-resistant to 30 bar (300 meters) so will be willing and able to follow you on any deep sea adventures. The special limited-edition Avenger is presented on an anthracite leather military strap with a pin buckle and it one of our favourite limited edition releases from Breitling to date here at Coolector HQ. 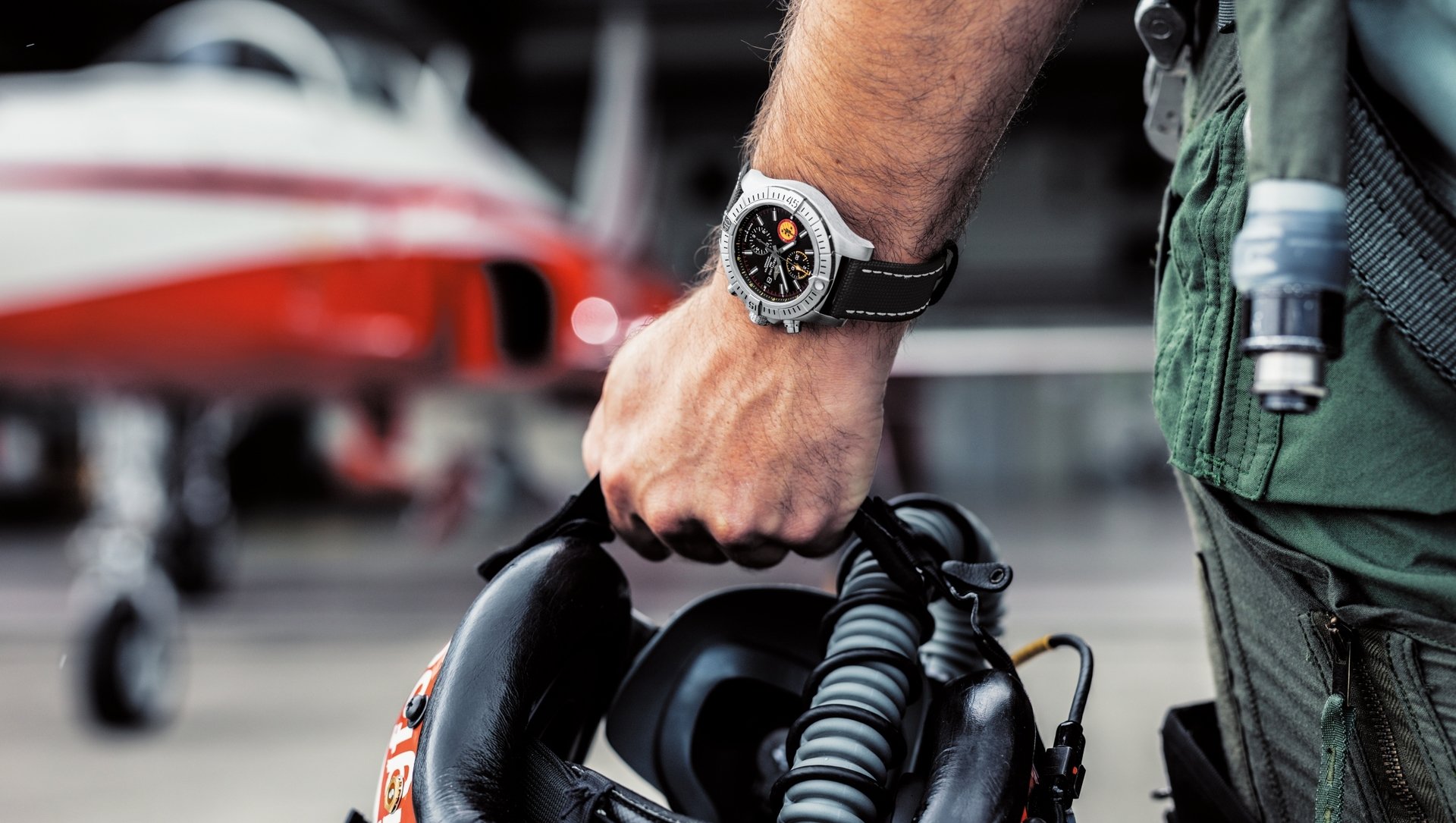 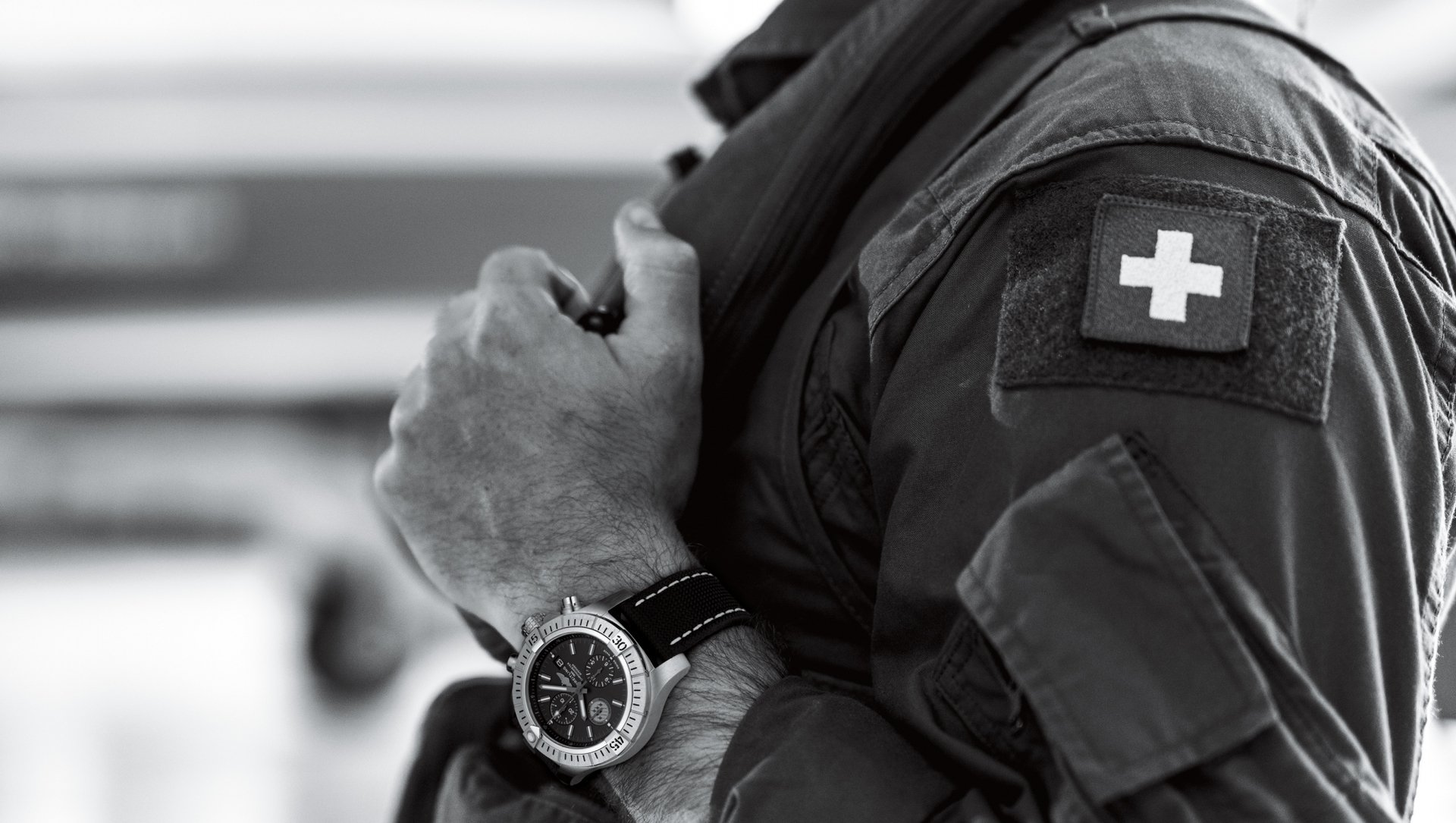 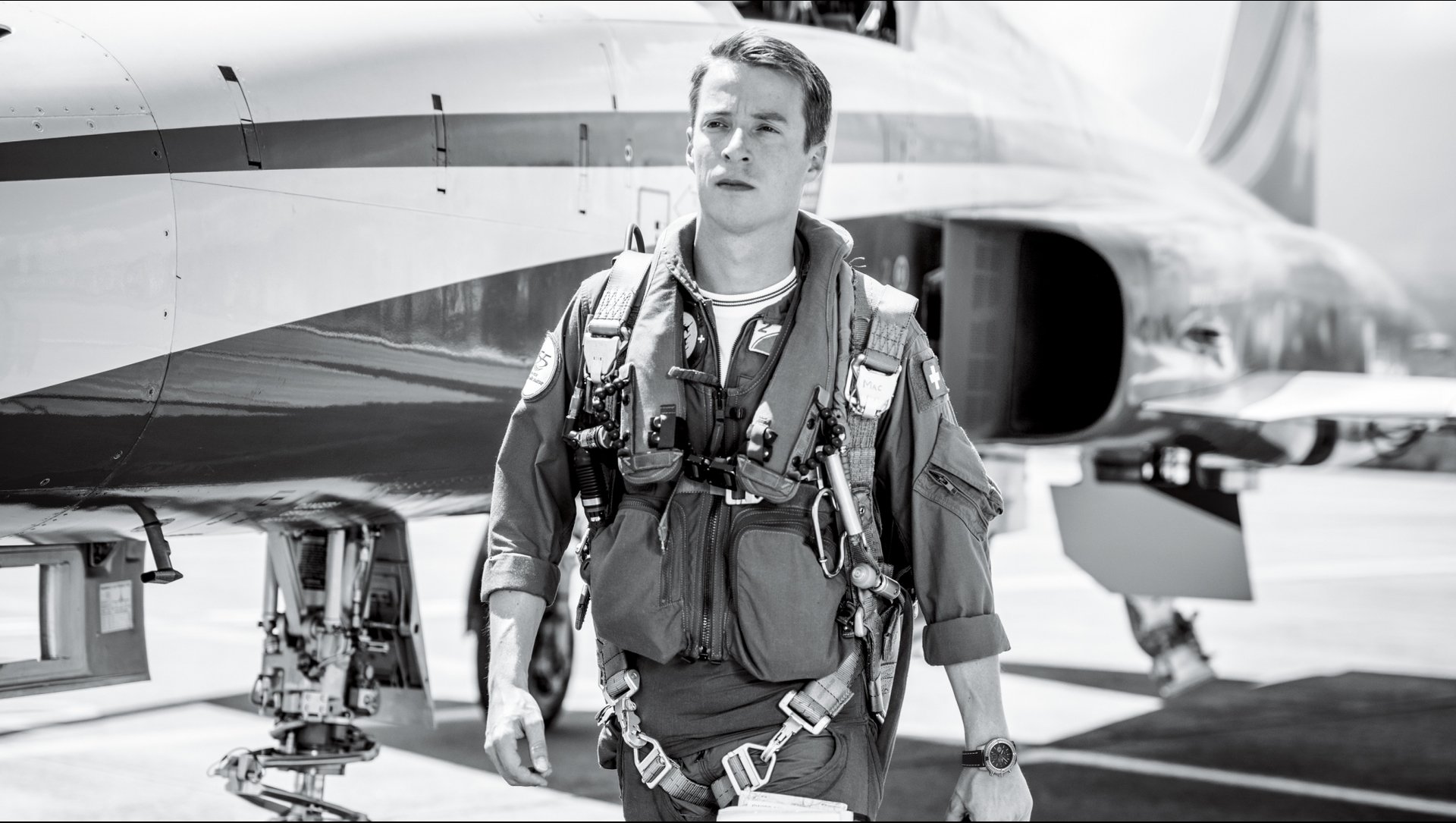 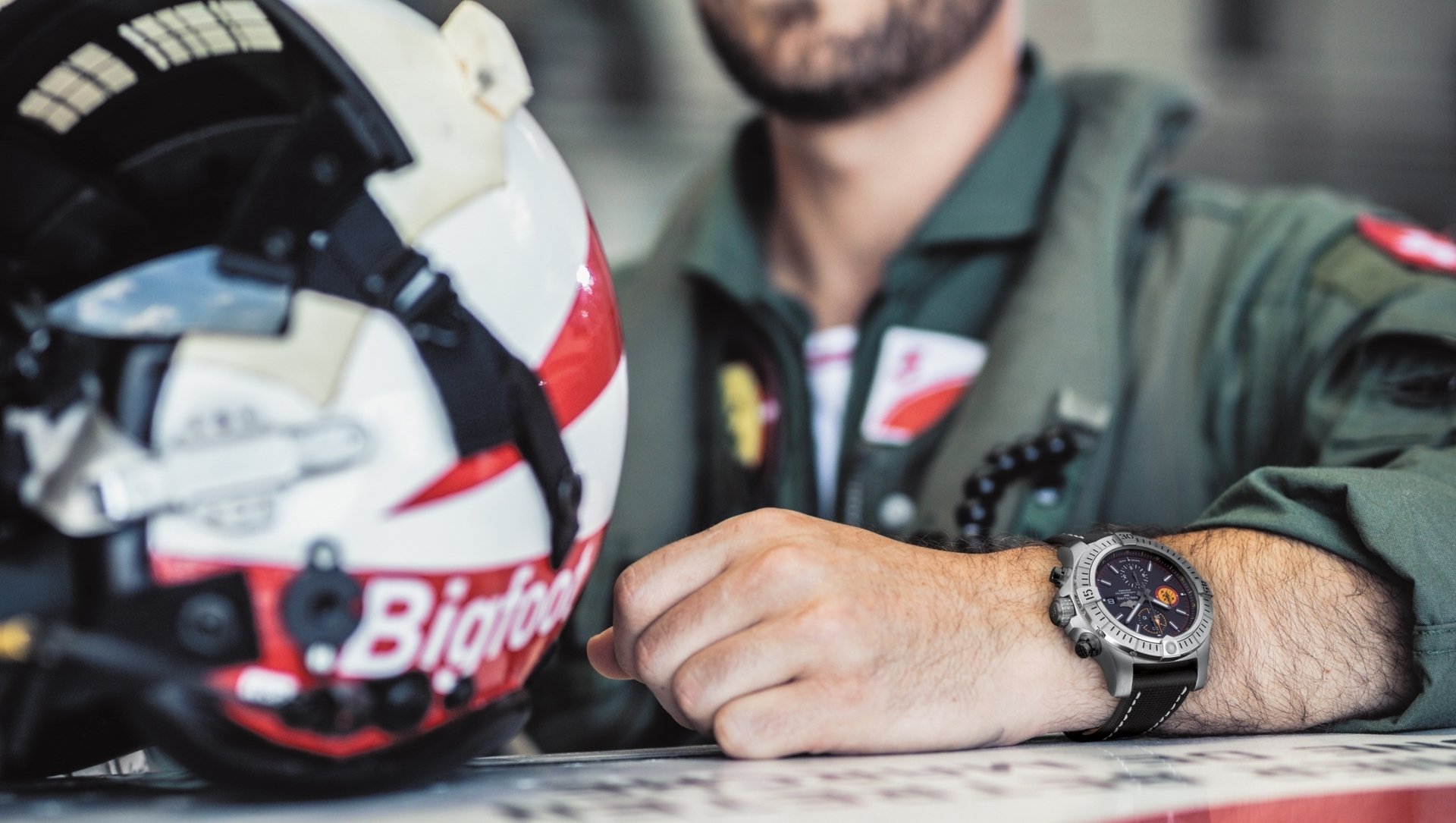 The Breitling Avenger Swiss Air Force Team Limited Edition Watch is built upon the incredible reputation that the Swiss watchmaker has garnered over the years and through the brand’s storied association with aviation, they have shared the finest moments in humankind’s conquest of the skies and this magnificent looking timepiece pays tribute to one of the most skilled sets of pilots out there, the Patrouille Suisse squadron.

10 of the Best Men’s Polo Shirts for Summer

When looking in your wardrobe during the summer months, it will likely be filled with tees and polos if you’re anything like us here… 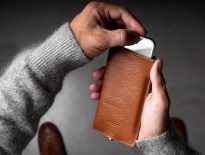 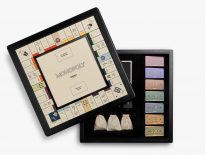